Hard to believe it was eleven months ago that I was in Tanzania, on my way to Ngorongoro Crater, a highlight of my travels. Since the National Parks in Tanzania wisely do not allow motorcyclists to ride through the parks — because I look like a large hors d’oeuvre to the wildlife (“tastes like chicken”) — I needed to find a place to leave the bike and my gear while catching a safari tour to the crater.

A popular camping spot for the safari trucks that come from further away is a place called Snake Park, just west of Arusha. Perhaps a poor choice of name for people who desire to sleep on the ground. Nonetheless I rode to Snake Park, and made a loop through the campground. There were a couple of safari trucks there, and a large lawn for pitching the many tents that safari-goers sleep in. Aside from that, there wasn’t much for amenities, and very little shade.

Okay, I find myself laughing, and mocking myself at the mention of “amenities” in Africa. There is a large chasm between the ultra-expensive safari lodges, and the places that I camp; many lodges in Africa can easily run $300 to $600US per night. That is obviously not in my budget. I generally paid around $8 a night to camp, or as much as $15 a night for a room.

Not far before I arrived at Snake Park, I passed a place on the opposite side of the road called Meserani Oasis. It was the only place for many miles that had a lot of trees, and it sat behind a walled compound. So I decided to head back a few miles and see what was behind the wall.

When I pulled up to the gate, a gentleman opened the gate and welcomed me in. I rode in and parked the bike, and was met by a mzungu (white guy) who was clearly American. It felt strange to speak to another American after so long. He told me that his mother-in-law owned the lodge, and he and his wife had moved back to Tanzania to be with Mama. I soon met Mama, a lovely woman who spoke perfect english and went out of her way to make me comfortable, even though I was the only guest at that time. Yes, she had campsites under the trees, but for just a few dollars more I could have a private room with a shared bath (and no one to share it with). So I took a room for several nights and inquired about a tour to Ngorongoro. Mama made a few phone calls and was able to book me into a safari tour that would pass by Meserani in the morning and pick me up.

Meserani is a full lodge, with a restaurant and bar, and although I was the only guest, they still cooked dinner for me each night I was there, and breakfast in the morning. I sat in the restaurant at dinner time, and spoke with Mama while she watched television. It was amusing to me that she was watching “Cops” each night…I squirmed a bit thinking that her view of Americans was from a show about redneck trailer trash criminals.

That’s when I learned that Mama had a much more complete view of my country (as did many people I met in Africa). She had another daughter who lived in the United States, and she had traveled to the U.S. to visit her.

“Near Austin.” I was nearly speechless.

“A small town outside of Austin.”

This was getting weird. Here I was on the opposite side of the world, in the opposite hemisphere, having dinner with a total stranger, who had a daughter living very near me. It turns out her daughter lived about 15 miles from where I was living before I left on my trip.

Before I left Meserani Oasis to head for Nairobi, I asked Mama for contact information for her daughter. She gave me a phone number, and I tucked it into my tank bag. 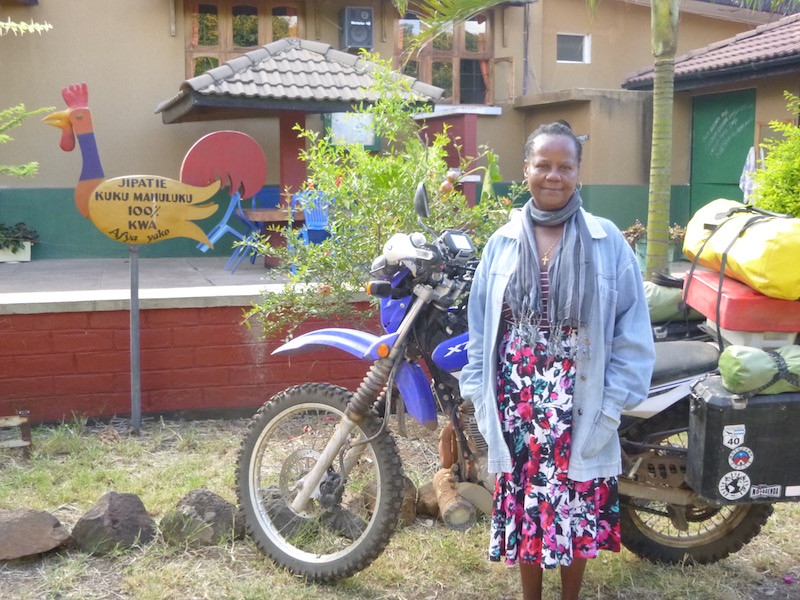 Mama at Meserani Oasis Lodge. One amazing woman. I haven’t even told the story about how she moved here on her own from a completely different part of Tanzania, bought this land from the Masaai, built this place on her own, and planted every one of the hundreds of trees herself. Truly an inspiration. And pay attention to the chicken in the background of the photo…it’s going to re-emerge in Texas later in this story.

Seven months later, and back in Texas, I was digging through my tank bag one day and found a small slip of paper with a phone number on it. So I called Patricia.

“Hi Patricia. This is going to sound strange, but last May I was riding my motorcycle through Tanzania and I met your mother.”

“Yes. I’ve been expecting your call!”

We talked for a while, and I promised I’d stop by to meet her and her husband and kids soon.

A few weeks ago, I received a text message from Patricia, inviting me to their home for a social gathering they were having that afternoon. So I headed out, armed with photos of me and Mama.

What a great time. Patricia and John are great people, very much like Mama. Very welcoming, very down-to-earth, and with an incredible family. We had a good visit, and I promised to return and take Patricia for a ride in the sidecar. 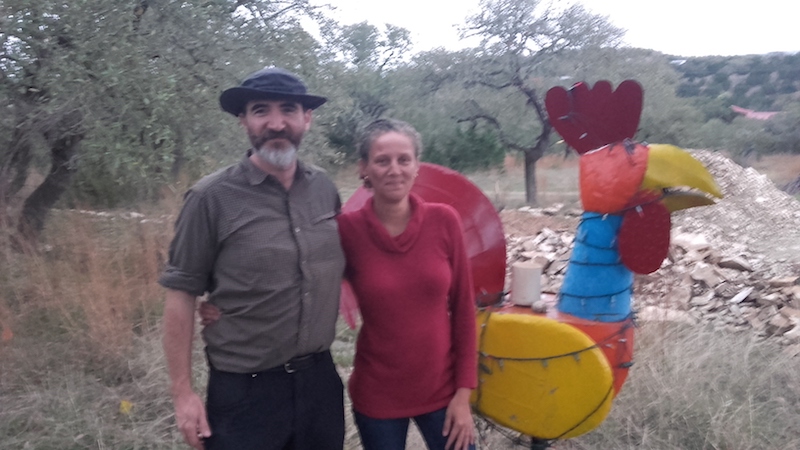 John & Patricia. Great people. Note the chicken….look familiar? Turns out when Mama came to visit Patricia in Texas, she saw this chicken and said “I have to have one!” So when she returned to Tanzania, she had her son-in-law build her one. 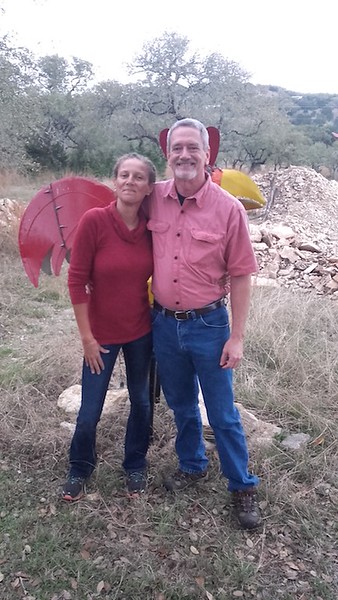 Patricia and Patricio. I’ll be back soon with the sidecar!

Sitting on their back patio on a warm Central Texas afternoon, looking across the yard at a Land Rover parked in the drive, I couldn’t help but feel like I was back in Africa. Surrounded by friendly people. Ready to see what’s around the next bend.

I hope to see Mama Margaret again some day….maybe in Texas, maybe in Tanzania. In the meantime, I’ve got a great reminder of my days spent in Tanzania right up the road.