We knew that today was going to be a full day of riding, sight-seeing and visiting with a good friend. We had no idea that it would be as exciting as it was at the end of the day.

When we awoke at Troy Meadows in the morning, it was 43 degrees. Once again, our focus on camping at elevation to avoid the heat had paid off. As we packed up to leave, pickup trucks and toy-hauler trailers were already pulling into the campground. People were arriving early to claim their spots for the weekend. This place is not easy to get to; it’s about a five hour drive from the Los Angeles area, and the last hour or more is up a twisty, climbing road. But such is life in SoCal: if you want to beat the other thousands of like-minded recreation families to a spot, you have to leave home early.

We rode down Sherman Pass Road toward the tiny hamlet of California Hot Springs (population 37). This road offers some incredible views, and should be on any adventure rider’s list. It is paved, but full of potholes and gravel, so not an ideal route for the sportbike or cruiser crowd. Single-track trails criss-cross the road in many locations, so it’s possible to add some challenge (and fun) to the ride.

Looking out from the Kern Plateau on Sherman Pass Road.

We had planned to meet a good friend and former co-worker near California Hot Springs, and ride together to the coast. Kevin and I had agreed to meet at a spot just east of the “town”, but somehow we both managed to miss a turn, and amazingly we passed each other not far from the meeting point. Kevin had left home in Orange County early that morning, and had already done about 200 miles of mostly freeway riding by the time we met. We had left the campground and ridden about 70 miles of mostly 25mph twisties, so we had enjoyed the shorter and cooler morning.

After meeting up, we rode to the Trail of 100 Giants. This is a short 1.3 mile walking trail that takes you past some incredible Sequoia trees.

It’s called the Trail of 100 Giants for a good reason.

Spend enough time staring awestruck at these trees, and your neck will start to hurt. 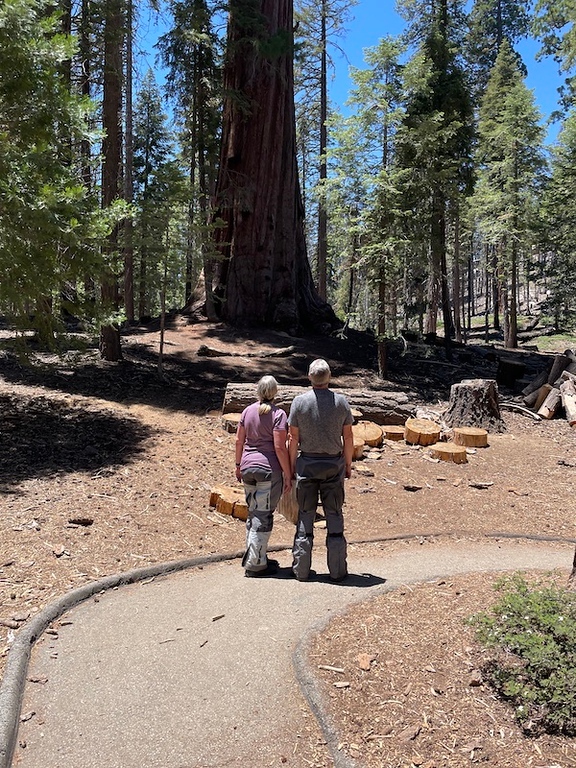 Two of these giants fell not long ago. Notice the bridge under the tree in the foreground.

Kevin and I discussing the absurdity that they allow raging campfires in the campgrounds here.

After hiking the trail, we took off on a spirited ride through Ponderosa and out to Porterville, where once again we ran out of elevation and the heat set in. We had to cross the Central Valley, and we knew it would be hot, so we kept moving. We rode past miles of orange groves and vineyards, eventually taking Highway 46 across towards Paso Robles. 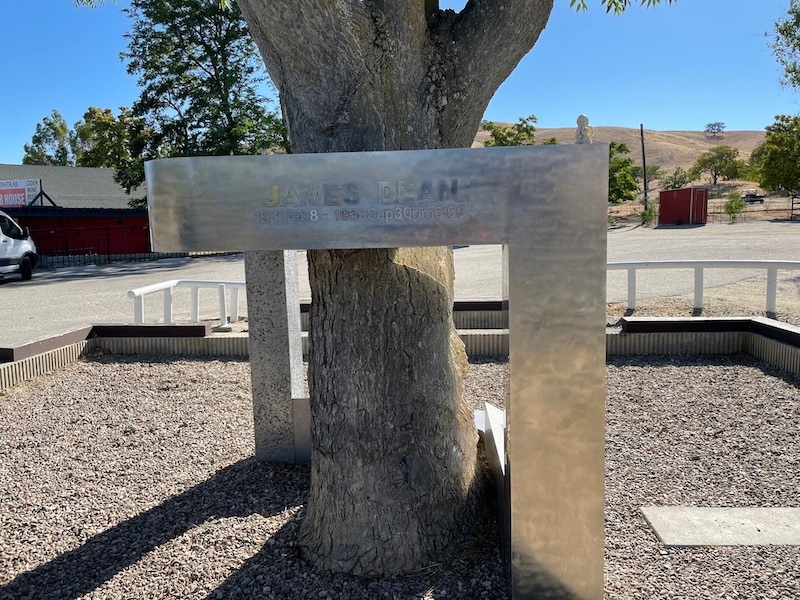 Memorial to James Dean, a few hundred yards west of the site of his fatal car crash.

Shortly before arriving at the Pacific Coast Highway, we turned off of Highway 46 onto Santa Maria Creek Road. The road is little more than one lane wide, and winds about 16 miles through some beautiful hills before dropping into the town of Cambria.

A bit less than two miles down Santa Maria Creek Road, Kevin came around a corner to see a Toyota RAV4 lying on its’ side in the ditch. The driver was just climbing out, and he ran towards Kevin. As we pulled up, the driver asked us to call 911. The car was already starting to catch fire, as was the very dry brush under it.

After confirming that no one else was in the vehicle, we set to work. Diana called 911, while Kevin and the driver got some boxes from the RAV4 to beat the grass fire out. I removed out camping gear from the back of the bike and pulled our one gallon RotoPax container of water off the rear rack. I was sure that it wasn’t going to do much to put out the engine fire, but I handed it to Kevin anyway. He threw some water on the isolated fire and it began to die. We had just enough water to actually put the vehicle fire out, and the driver was able to beat the grass fire out. Had we not arrived when we did, we were convinced that this would have turned into a large and destructive fire.

After an exciting end to our day’s ride, we continued on to Cambria and north to San Simeon. For once, we didn’t need elevation to relieve the heat. The ocean breeze felt great.

In the morning we said goodbye to Kevin, as he headed south towards home and we continued north a short distance toward Big Sur.

It was great to spend the day riding with our good friend, but sad to see him go so soon. Hopefully we’ll see you on the road again soon Kev!