It’s taken a while, and we definitely had to jump through some hoops, but as it all came down to the wire, we were successful in initiating the next leg of our trip.

Our faithful 2021 model 700 Tenere, home from Alaska, with most of the aftermarket parts removed and ready to be shipped to its’ new owner in Oregon.

Since we would be starting a three year journey this year, without the bike returning to the states during that time, we decided to start fresh and ordered a 2022 model last September. It turns out that this model is still incredibly popular, and in short supply. We originally thought the new bike would be here in December, and we’d have plenty of time to get it prepped, and do some test rides and a little camping before shipping it to Europe.

December came and went, and we received word that the bike wouldn’t arrive until mid-February. Meanwhile, we booked a quick trip to Iceland in January. We also learned that unlike six years ago, when I was able to ship my motorcycle airfreight between continents for just over $2000 per trip, things had changed dramatically. There were less flights overall, non-essential shipments were limited, and prices had gone through the roof. We had originally planned to ride to Toronto last year (if things opened up, which they didn’t), and ship the bike on Air Canada to Dublin, as Air Canada does a “Fly Your Bike” program each year. But since 2020 they’ve canceled that, and there was no firm commitment that it would be reinstated this year. So I started searching for quotes on shipping the bike by air to Europe, and was getting prices in the $10,000 range, with no guarantees on when it would arrive.

With airfreight out of the question, we switched to searching for a sea-freight solution. Again we immediately ran into issues. Most people have seen photos of the cargo ships backed up outside the Port of Los Angeles. Shipping containers themselves have become harder to find and arrange, and booking a shipment more difficult. I kept hearing the same issues: “You can deliver the bike to one of our ports, but we can’t tell you when it will get on the ship, and once it does ship, we can’t tell you how long it will take to clear customs, but plan for two to three months total.”

While we are fairly open with our schedule, we have been “rolling over” our Isle of Man TT reservations since 2020, saving our spot on the ferry from Heysham, England. So we had one hard date: we needed to catch that ferry on June 3rd. By early February, we didn’t even have a bike yet.

We finally got word the bike would arrive in Los Angeles on February 18th. Around the same time, I connected with Stefan Knopf from Germany. Stefan has been shipping bikes from Europe to Florida for Bike Week for thirty years. Right after Bike Week, he loads the bikes into containers and ships them back to Europe. I was able to confirm a spot in the last of his containers which would be closed up and headed to the port on March 18th.

If we waited for the bike to ship to our local dealer here in Texas, it might be another two to three weeks before we received it. At that point, I would have about one week to install all of our gear and ride to Orlando, Florida in time to put the bike in the container. But there was a bigger problem: in order for the bike to clear Customs, it had to be titled in my name. Texas doesn’t have an expedited title service. When I called the DMV to enquire about this, and explained the situation, I was told, “Nope, and good luck”. My recent experiences told me that it would take about 12 to 14 days to receive the title once I applied for it, and of course I couldn’t apply for it until I had the Manufacturer’s Certificate of Origin (MCO), which I would get with the bike. It was looking like we would be about a week late on making the shipping cutoff.

On February 21st, we were told the bike would arrive at Yamaha on the 23rd and would be ready to pick up on Friday the 25th. We rented a Hertz cargo van on the afternoon of the 23rd, and drove the 1350 miles straight through to California, picked the bike up, and drove straight back home, arriving home on Saturday the 26th. Just under three thousand miles in a little more than two and a half days. The bike was unloaded into the shop and I went to work installing all of the “stuff”. (Pro Tip: Ford High-Roof Transit cargo vans at Hertz: $118 for the week. Yes, you read that right. That’s $17 per day, with unlimited mileage.) 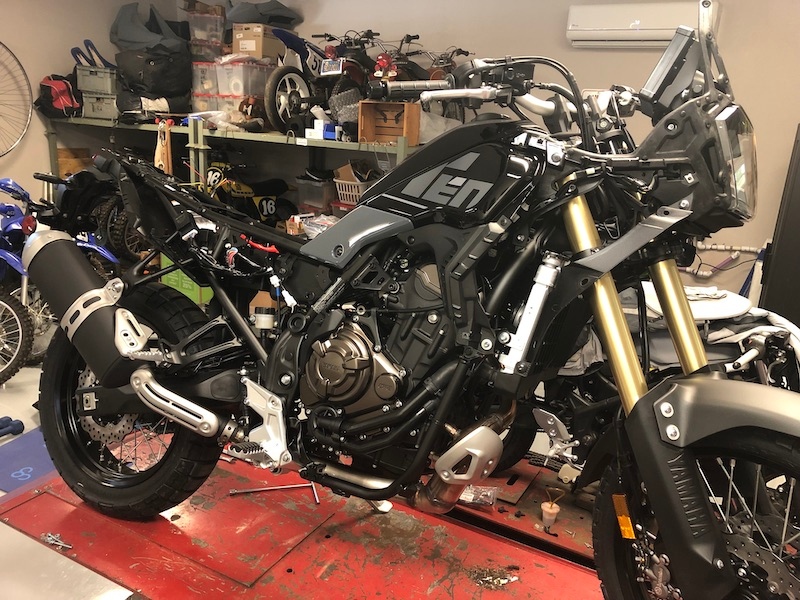 Our new ’22 model, with most of the modifications done except the skid plate. At this point, it has 6 miles on the odometer.

First thing Monday morning I went to the DMV and applied for the title. This would be the determining factor as to whether the bike got shipped or not. The prep work was fairly straightforward and took a few days. There was only one piece from our old bike that wouldn’t work: the skid plate we use has our tool kit mounted to it. The exhaust system on the 2022 model is slightly different, so the skid plate wouldn’t fit, and the 2022 model accessory skid plate was not yet available. So it was off to the local welding shop to modify the old skid plate to fit.

The final modification: since the ’22 uses a “cat-forward” exhaust system, the ’21 bash plate doesn’t fit, and the ’22 accessory bash plate isn’t available yet. Thus, it may not be pretty, but the ’21 bash plate was modified to fit. Since our tool box bolts to the skid plate (in the right of the photo) in order to place some heavy weight down low, we really needed the skid plate. Note: this skid plate and tool box is a Yamaha brand accessory, but Yamaha US doesn’t sell the tool box. So for those who might have this skid plate on their bike and wondered why there were four nut-serts on the left side, now you know.

The bike was finished and fully loaded on Friday, March 11th. The title had yet to arrive. In order to get to Orlando with a small safety margin, I would need to depart on Monday the 14th. I waited until the mail was delivered on Monday, and with still no title, I left for Orlando with a grand total of 150 miles on the odometer. I made it about another 150 miles before the first major hold-up:

An accident on Interstate 10 west of Houston had traffic parked for just under two hours. Because this was in a construction zone, there were concrete barriers on both sides of the two lanes, and with no exits, no one could get off. So everyone parked, had lunch, walked the dogs, and generally just waited until the lanes were opened again. Thankfully, it wasn’t August and 110 degrees out.

Once the traffic cleared, I made it through Houston before hitting rain. At that point it was looking like I might be riding in rain the entire way to Orlando. It was also getting dark, so I stopped for the night just east of Houston.

The next morning was clear and sunny, and I chased the rain clouds for the entire day, making it to Bonifay, Florida that evening. Once again, the rain had stayed ahead of me until the last fifteen minutes or so. Diana sent word: no title today. Things were getting tight. If the title didn’t arrive in the mail by Wednesday, all would be for naught, and I would turn around Thursday morning and start a slower ride home.

On Wednesday I again rode towards the rain clouds on wet roads but out of the rain. I was surprised when I made it into Orlando without getting rained on. Then my luck ran out. While sitting in stopped traffic on I-4, the heavens opened up. I was less than ten miles from the warehouse where I would deliver the bike, but traffic was stopped. It was nearly four o’clock in the afternoon, and the warehouse closed at 4:30. As the traffic began to move and I made it to my exit, my phone rang in my intercom. It was Diana calling to tell me the title had just arrived, and she was sending it FedEx to me at the Orlando warehouse for delivery the next morning.

I pulled into the warehouse just as they were closing, met Stefan, and grabbed a few things off the bike quickly. Stefan took me to a nearby hotel, and we made arrangements for him to pick me up in the morning.

On Thursday morning, I prepped the bike for shipment, removing the windscreen, mirrors, and GPS, disconnecting the battery, and filling out all the paperwork. We strapped the bike onto a shipping rack, and it was ready to be loaded into the container.

One last photo before the bike goes into the shipping container and onto the ship. See you again in about a month, buddy.

I flew home Friday morning (via Detroit, because it was less than half the price of a direct flight, and time was no longer of the essence). The bike will arrive in Antwerp sometime in the last half of April, and we will meet up with the bike and Stefan at his place in Heidelberg, Germany a week or so later. Meanwhile, we will continue to work on route planning, and logistics. With the current situation in Ukraine and Russia, some of our plans have changed for this year, and likely next year as well, and will have to remain fluid.