After completing my two weeks of Spanish school, and feeling fully fluent in garbled two-word sentences, it was time to head south again. My instructor for the past two weeks, Alvaro Morales, is another example of the people I keep meeting on this trip. Alvaro is nearly my age. He has four children, three of which have a genetic problem which has left them in a condition similar to MS. They require wheelchairs and constant assistance. The youngest son helps Alvaro and his wife care for the older two sons and daughter. Alvaro also is in need of gall bladder surgery, which because of Guatemala’s health care system, has been met with multiple delays, and there is no insurance to cover any of this, nor are there schools in Guatemala for children with special needs. Yet Alvaro showed up every day at school with an incredibly positive attitude, never complained about his situation while explaining it to me, and never seemed to be sad or down or in any way upset about the cards he has been dealt. He often would end the discussion simply by saying “es la vida” (that’s life).

Loading the bike and saying goodbye to my new friends at La Union Spanish School, I joined up with Judith, who I had met while hiking the Pacaya Volcano. Judith is from Switzerland, and is riding a Suzuki DR-Z 400 (which she shipped from Switzerland to Anchorage) solo from Alaska to South America. It turns out we are on a similar path through Central America so we decided to ride together for part of the way at least. This makes the border crossings much easier and more secure, as one person can watch the bikes while the other goes inside to do the paperwork.

Out of Antigua, we headed to Escuintla, then turned southeast toward the border of El Salvador. I was not prepared for what awaited there….several miles of parked 18-wheelers, many of which had the drivers sleeping in a hammock under the trailer. This was the line for the border crossing. Fortunately we were on motorcycles, and didn’t have to wait in that line. Another bike with El Salvador plates and two guys on it passed us, and the passenger motioned for us to follow them. Like Mister Toad’s Wild Ride, we spent a good twenty minutes threading between oncoming traffic on the wrong side of the road, sometimes moving all the way to the opposite shoulder or off the opposite side of the road to pass traffic. Eventually we arrived at the border, and we immediately were approached by another guy on a small dirt bike who offered to help guide us through the border crossing logistics — for a price, of course. The fee seemed reasonable to avoid the added time involved in tracking down each of the proper windows and in the correct order.

After breezing through the Guatemalan side fairly quickly, we headed to the El Salvador side, which took considerably longer. At one point I asked our helper where he had lived in the United States, since it was apparent he must have spent time there based on the quality of his english.

“I lived in Corona”, I mentioned.

He said that he worked in the orange groves in Riverside. I mentioned that at one time I had owned a small grove in Riverside. It turns out he worked for the guy that managed my grove, and probably even worked in my grove at one point. Unfortunately the real estate debacle of 2007-2008 caught up with him, and he lost his house and ended up returning to El Salvador, although he said he had a lot of good memories of California.

It took a bit over two hours to get through the border process, but I felt fortunate even at that considering that I heard the truck drivers were expected to wait at least five hours at the border.

Not the most welcoming sight, but it got better further into the country.

I noticed three things right away in El Salvador. The first is that the official currency is the U.S. dollar, which makes things easy. The second is that gas is sold by the gallon (it was in Guatemala also, actually), so the gas prices in U.S. dollars per gallon look familiar, although cheaper than in the U.S.; a gallon of gas here is around $2.80. Diesel is $2.40. The third thing is that, finally and thankfully, the topes or speed bumps are gone. It was so nice to ride for miles and miles and not have to suddenly slow for a random speed bump in the highway.

No speed bumps, but these will slow you down. Notice the woman on the other side with the red flag acting as Crossing Guard for the cows.

The ride from the border down to El Tunco is worth the trip. About thirty miles before El Tunco, the road emerges onto the Pacific Coast and the views are incredible. Both the road and the views reminded me of the Pacific Coast Highway up around Big Sur in California, but without all of the traffic and RVs. Okay, there was one or two chicken buses, but literally only one or two, and they were actually headed in the opposite direction. There were also about four tunnels, which were a bit frightening, as you suddenly plunge into total darkness and it is very hard to determine where the center line of the road is. And if there happened to be a pothole in the tunnel, you would never see it until it was too late. Luckily, the road was in great shape and the twists and turns along with the ocean views made for one of the best rides of the trip so far. 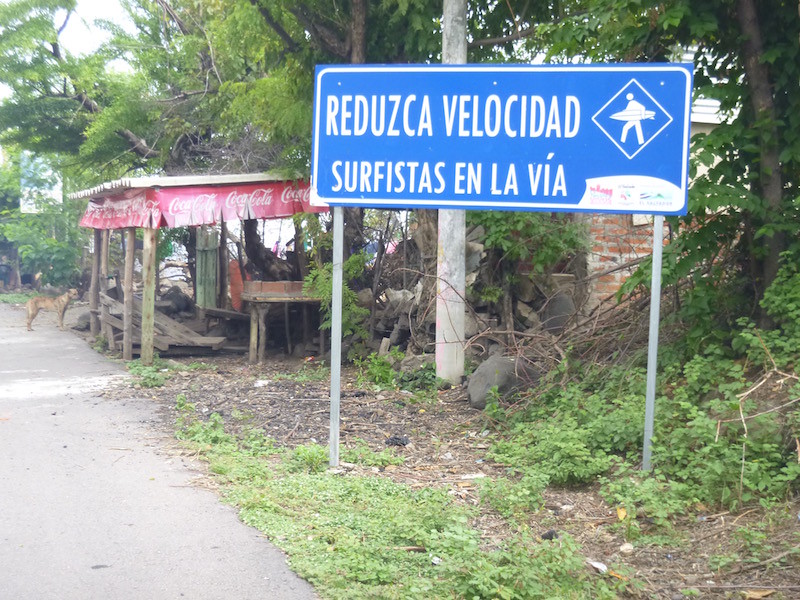 “Reduce Speed: Surfers in the road”. First time I’ve seen the word “surfistas”, and on a proper highway sign no less.

El Tunco is a major surf location. The surfer-tourist part is a very small area, similar to Zipolite in Mexico, with only a couple of streets, but loaded with hostels, surf shops, and surfers. The crowd here seems to be international, but shares the same surfer style, and the day-to-day activities revolve around surfing during the day and partying at night. The beach itself is nothing great; in fact, it’s mostly just rocks, but it’s not the beach people come here for. It’s the surf.

Tomorrow will require a trip into San Salvador to visit the local Yamaha dealer to buy a couple of spares, and perhaps shop for tires. I’m hoping I can make it further before buying tires, but if I find the right set at the right price, I may just pick them up here. Then it’s back down the coast for another night in El Salvador to set up for two border crossings in one day.