The people I have met on this trip have all been great, and many have become great friends that I hope to keep in touch with.

After leaving Team Poland, I headed west again to Switzerland, and met up with another of those great people that I had met on the road earlier.

Last year, I spent several weeks riding on and off in Central America and Colombia with Judith. She had shipped her Suzuki DR-Z400 to Anchorage on July 1, 2015 and was headed for Chile when we met in Guatemala. She made it to Santiago, Chile before having to return to Switzerland at the end of December (I only made it to Lima, Peru by that time, having been sidetracked by a couple of weeks paragliding in Colombia).

Judith (and Jamie) live in Lucerne (or Luzern, as it is correctly spelled here), in a beautiful apartment overlooking the city. 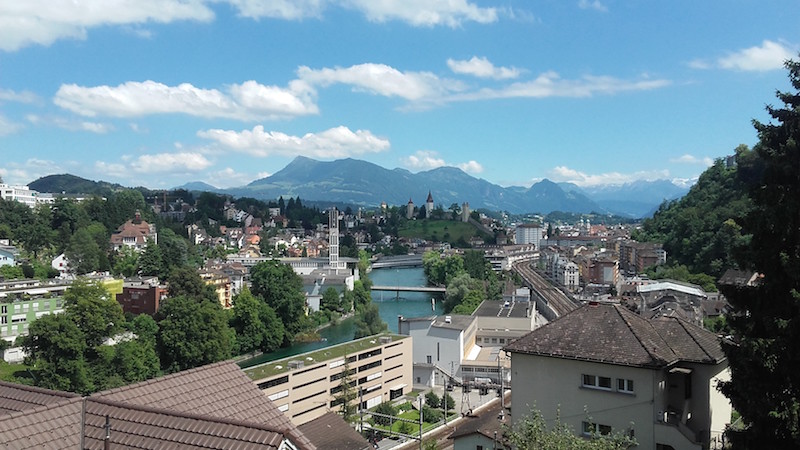 Her apartment takes the entire top floor of the building, with a wrap-around terrace. Spectacular.

As I said earlier, it’s extremely beneficial to have a “local” tour guide, and Judith was willing to show me Switzerland, and especially the Alps, in a way that I never would have found on my own. And she managed to arrange a V-Strom 650 for me to ride, so I could keep up with her Gladius 650 and give my XT250 a few days’ rest.

Judith on her Suzuki 650. Her DR-Z400 (“Suzy”) is in the shop for a major heart-transplant after her trip through the Americas.

Judith laid out a route over nine passes and just under 500 miles. The scenery everywhere in Switzerland is breathtaking, and the mountain passes are just that much better. We avoided a few of the more popular passes in order to avoid the traffic, and instead ended up on some beautiful single-lane roads. Even so, the amount of bicycle traffic is amazing. I have trouble understanding how so many people can pedal up these hills. Then again, at one point we saw four people who looked to be in their 70’s riding mountain bikes, and it wasn’t until Judith later pointed out that they were electric mountain bikes that I lost a small amount of my astonishment. Still, I’m impressed at the energy levels of everyone here.

We also just happened to stumble on the UCI Mountain Bike World Cup in Lenzerheide.

Just before the Mountain Bike races, we passed through the small village of Filisur. Well, I guess normally it would be a small village. But this week, as we rounded the curve descending into town, we were met with thousands of tents. The “One Love Festival” was happening, and it apparently is quite popular. Lots of bands, DJ’s, music, and other “activities”.

Most of the passes have a small restaurant/cafe at the summit, usually with an outdoor deck, and nearly every one of them is filled with motorcycles.

Typical scene at the top of one of the passes.

The real fun is getting there.

I met these three at the top of one of the passes.

In Switzerland, you can get a license to ride a moped at age 14. These guys were 14, 15, and 16. (Note the handlebars, and the Gas Monkey sticker on the back of the box. Gas Monkey is hugely popular in Europe). 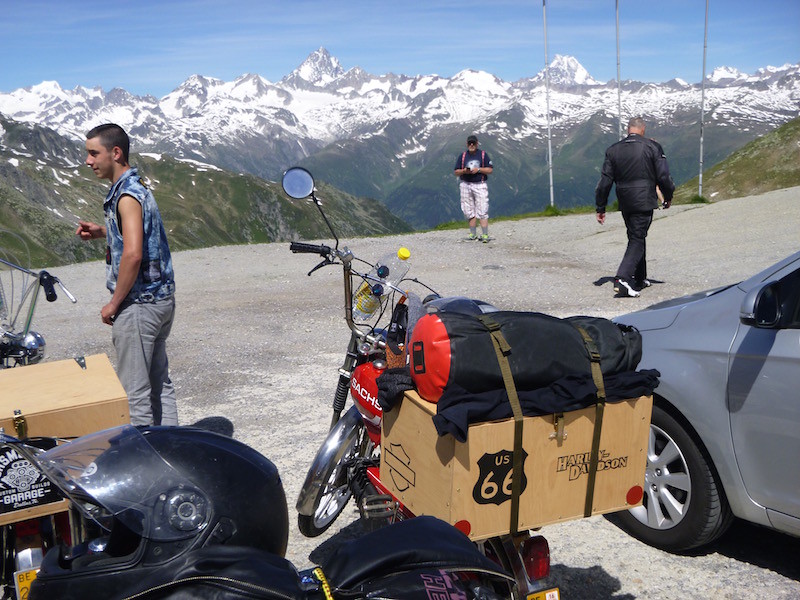 They were doing a five day tour of Switzerland, including most of the passes that we were riding on 650s. If I had done this at 14, I’m pretty sure I wouldn’t have waited until I was 55 to do this trip. Too bad this isn’t the norm in the States.

This was an “art installation” tying the old and new bridges together. Looked like somebody’s laundry to me… 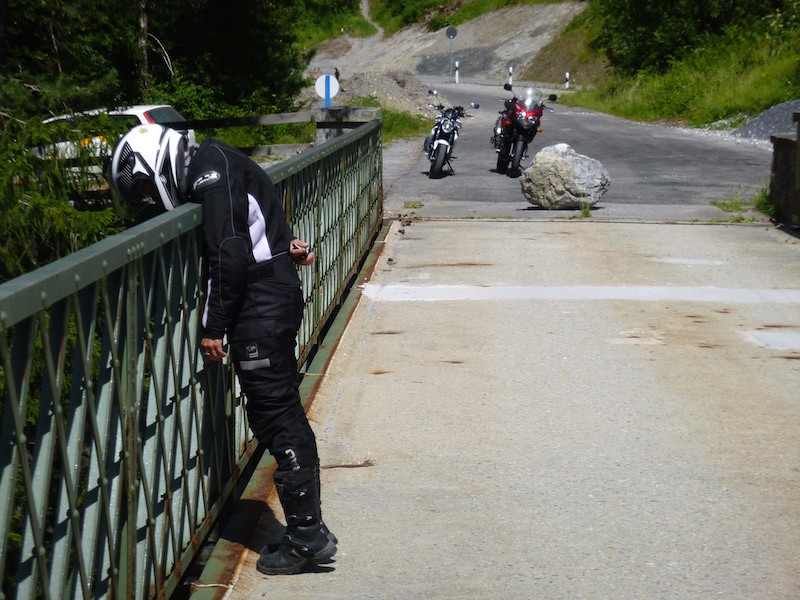 Bored of leading the American around already?? 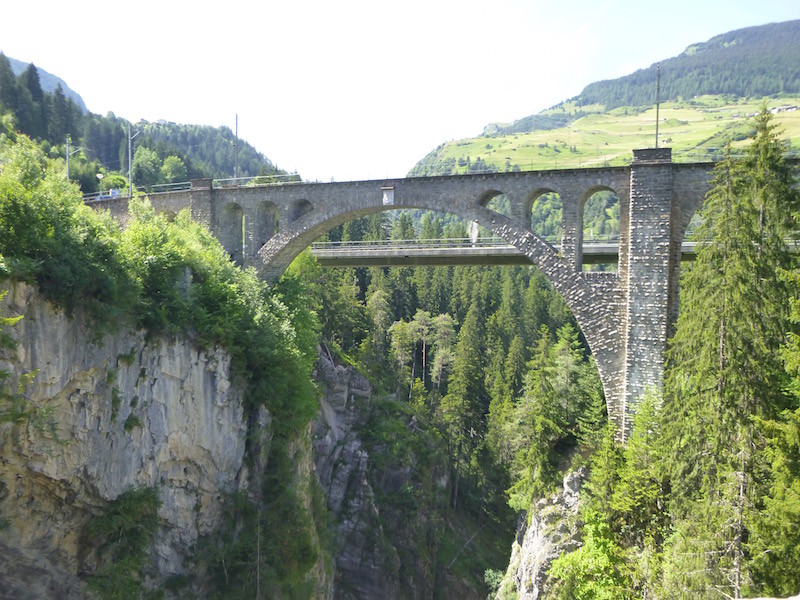 At the end of the first day, we stopped just past St. Moritz (wow, just wow) at Diavolezza. This small hotel caters to skiers in the winter and to mountain climbers and trekkers in the summer. It’s only accessible by gondola.

Quickest way to the top of the world. 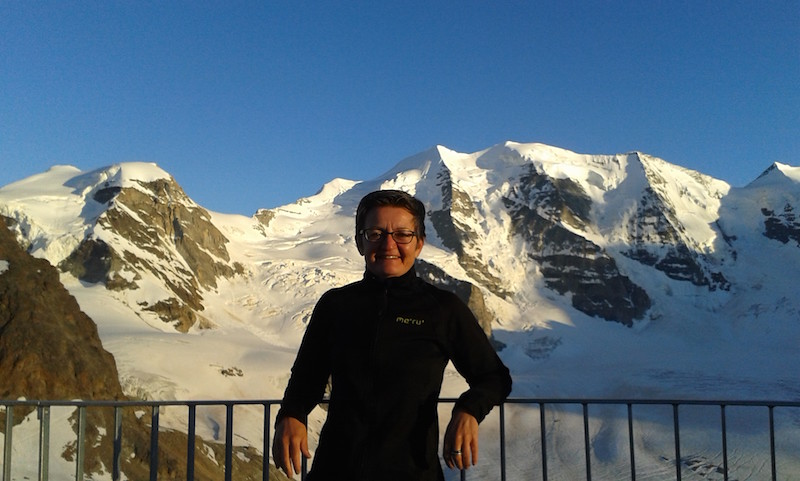 On the second day we took some smaller passes, and I found my favorite: Klausen Pass. Others may be higher, or have smoother switchback climbs, but the scenery climbing up to the top of Klausen was breathtaking, and the (even narrower) road down the other side towards Luzern was spectacular. Definitely no room for error, especially with the supercars that were coming in the opposite direction, but you’d miss some of the best sights if you were completely focused on the road.

Typical Swiss architecture in the small villages we passed through. 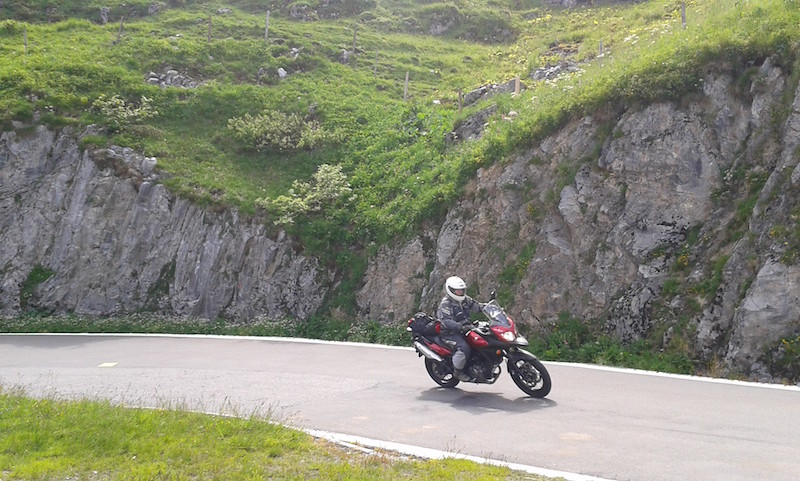 Back at the Suzuki dealer in Luzern with Christoph and Judith. I enjoyed my time on the V-Strom. If I were doing a different kind of trip, I might seriously consider a bike like this. For my trip, it’s still a little too big, and much too heavy.

Great rider, great tour guide, great friend. It’s just a matter of time until she’s back on the road on Suzy on her next World Tour. Thanks Judy!!