In February 2016 I rode into the small village of El Chalten in Los Glaciares National Park in Argentina, hoping to catch a glimpse of Mount Fitz Roy. It was raining and the clouds were low, and if I didn’t know better, I would have thought there were no mountains anywhere around. I crawled into my tent that night in the rain, and slept well. The next morning dawned clear and bright, and on the way out of town, I was greeted with this spectacular view:

Today reminded me of that day in several ways. As we left Healy headed towards Anchorage, the rain and snow had stopped and it was bright and clear, with temperatures in the upper 40s and low 50s. About thirty miles south, we began to see the elusive Denali.

Denali peeks out at us. The mountain is still 40 miles away from here. 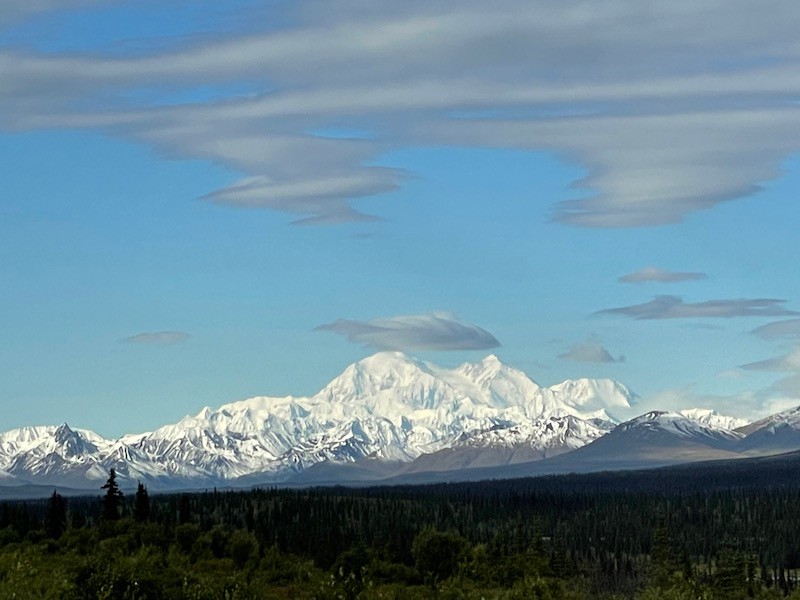 You can’t see all the people climbing up from here…probably nobody this late in the year, but I’m no expert. On average, around 1200 people a year attempt the climb, and about ten percent of them complete it. During peak climbing season (late May to early June), the mountain can have between 500 and 600 climbers on it. Last year, nobody climbed Denali due to the pandemic. This year the routes re-opened but the numbers were considerably smaller.

We’re happy that the weather helped out and gave us a beautiful view of the highest peak in North America.