I left Casa de Mireya in San Pedro de Atacama, Chile mid-morning. No real hurry. I was only going 170 miles to Pastos Chicos, a hotel and restaurant standing alone in the middle of the desert due east in Argentina. Sure, it was a fairly long 170 miles, as it crosses two mountain ridges, so there was a lot of climbing and descending.

I rode up and out of San Pedro, back the way I came, but passed the turnoff to Bolivia and headed for Paso de Jama. It’s all desert here, but the scenery is fantastic. 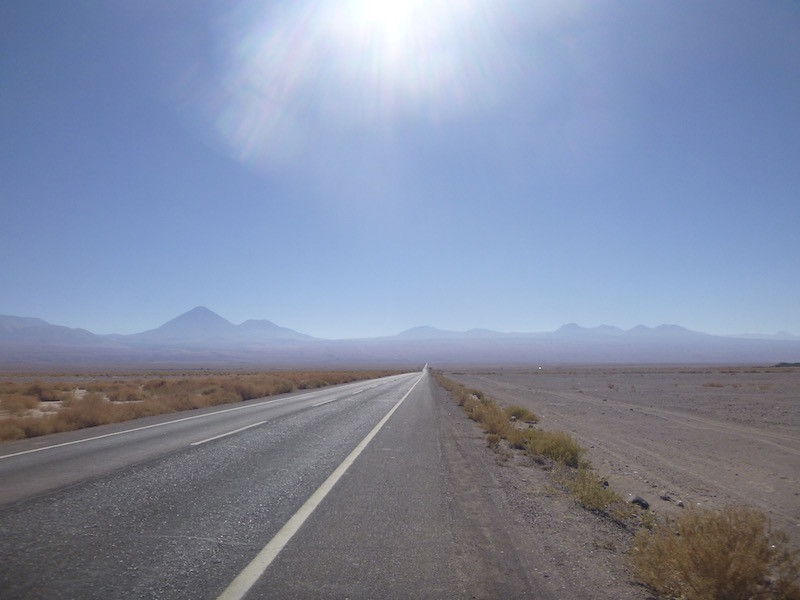 Heading out of San Pedro de Atacama in the morning. Hard to see in this photo, but the highway goes straight to the mountains, then an extremely steep climb up for many miles.

Looking back down on the Atacama desert floor from above San Pedro. 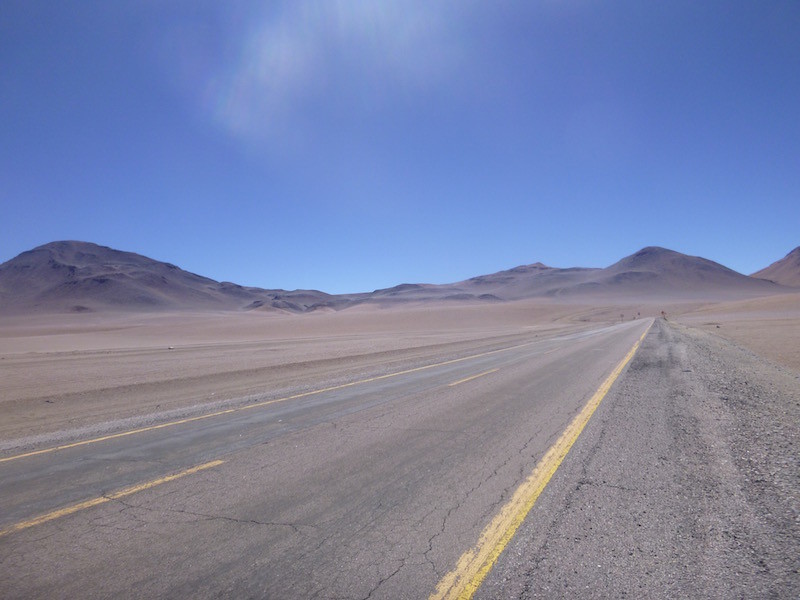 Beautiful desert, mostly at around 14,000 feet.

Amazing to see this river running through the desert. There are a lot of salt lakes up here, and I imagine this water has a high salinity content also.

The wind was blowing hard high in the desert, at times upwards of what felt like around 40 to 45 miles per hour. It was odd to be struggling with the bike in the wind, in the middle of an open desert, and not have any sand blowing around. Everything here is much larger and heavier than sand: gravel, rocks, etc. It hasn’t decomposed to the sand level. So even in strong winds, there was no debris in the air.

I have a knack of arriving at borders at just the wrong time. As usual, I pulled up to the border right behind three large tour buses full of mostly backpackers. I got in line behind them and went through the immigration process. Both Chile and Argentina Immigration and Aduana are all in the same building. Fortunately, after the backpackers passed through immigration, they got to skip Aduana since they weren’t bringing vehicles in, so the process sped up considerably at that point.

Walking out of the joint border crossing building, I looked around and noticed that there were no money-changers around. At most border crossings, there’s either individuals walking around offering to change your money, or there are small shacks set up with “Casa de Cambio” signs on them. Not here. Absolutely no place to change money.

Keep in mind that this is in the middle of the desert. The nearest towns are San Pedro de Atacama, Chile (about 100 miles west), Uyuni, Bolivia (about 325 miles north), and Jujuy, Argentina (about 200 miles southeast).

Next door to the border station on the Argentine side is a YPF gas station. I pulled in there thinking maybe I could change some Bolivianos or Chilean Pesos there. Nope. But fortunately they did take MasterCard. Not Visa. Only MasterCard. And I happened to have one. So I was able to get fuel, just no food.

Another 75 miles or so through the desert I came to what I had planned to be my hotel for the night. Again, unfortunately, “solo effectivo” (cash only). It was only about 2:30pm so I decided to keep rolling in hopes of finding a small village with an ATM.

A couple of hours later I pulled into just such a village. Even though it was Monday, there appeared to be quite a market going on near the Central Park area.

Across from the park was the ATM. I stuck my card in it and immediately got the “Your Card is Not Accepted Here” message. Back on the road, headed for Jujuy.

As I wound down the mountain I dropped from clear blue (and I mean really blue) skies into the clouds, and it started to drizzle. I popped out at the bottom and it cleared up again. Then within about five miles, I suddenly found myself in the thickest soup of a fog I think I’ve ever ridden in. It lasted for about 30 minutes, then cleared off again. At this point it was getting close to dark, and I decided that I would head directly for Salta, as it is a big city, and I knew I would find an ATM there, as well as the hostel I originally planned to stay at the following night.

An hour and a half later, and well after dark, I arrived in Salta, found the hostel (cash only) and convinced the manager to let me put my bike in the lobby and my stuff in the room and walk (hobble, actually) to an ATM five blocks away. This one took my card, and I now had enough Argentine Pesos for not only a room but a meal.  I had ridden 352 miles today. Much longer than I intended.

It must have been a holiday Monday, as there was a HUGE party going on in Salta, and the main part of it, with a huge outdoor stage and nationally famous performers, was being broadcast live on television. I still don’t know what holiday it was, but people were out in force at 11pm.

The next morning I woke up late, had a leisurely breakfast, and slowly packed and hit the road for Cafayate. I was in no hurry. It was only 118 miles. But what a lovely 118 miles it is. Ruta Nacional 68 south of Salta passes through some absolutely beautiful green farmland. The green is almost overwhelming after so much time in the desert. Farms are large, crops beautiful and bountiful with huge leaves. Everything here is very different from what I had been experiencing for the past month or two. The rural people, for the most part, seem to live better than in the last few countries I visited. Certainly not everyone, but a large percentage. The lower-end homes are nicer, and the land looks better. Many houses have driveways, and people here own cars, which they tend to drive in a respectable manner. There are a lot less buses and collectivos shuttling rural residents to and from towns. Which means there are a lot less people sitting and standing next to the road everywhere. I haven’t seen it like this since I left Texas. The downside of less buses and collectivos is that the backpacker population, which is huge here, is left with less ride choices. There are a lot of people with large backpacks hitchhiking along Ruta 68.

This valley that Salta sits in is the northern end of the wine region here.

The wine trail is a long one in northern Argentina.

About fifty miles south of Salta, the road starts to climb a mountain, and the lush green valley starts to go away, returning to desert, but yet another, different desert landscape. 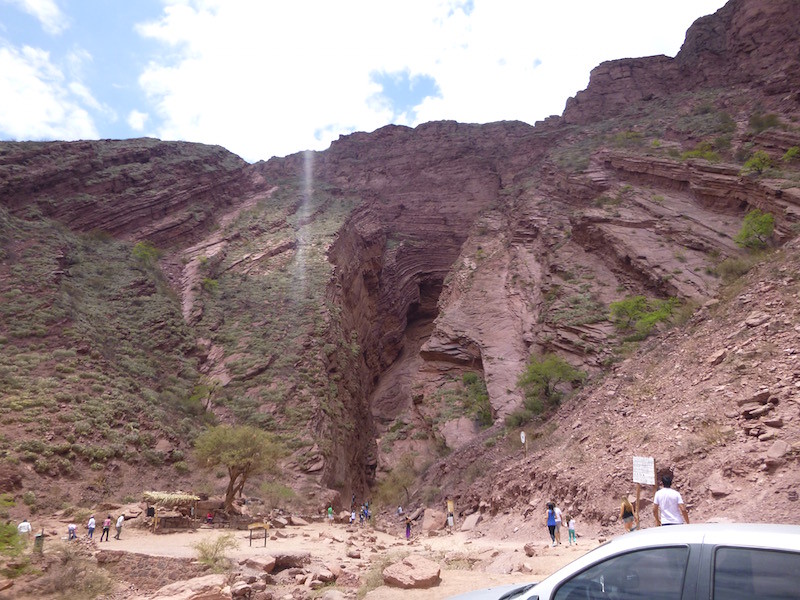 This large chasm on the side of the road was very popular, and there were lots of people walking up into it. The rock formations here were beautiful. 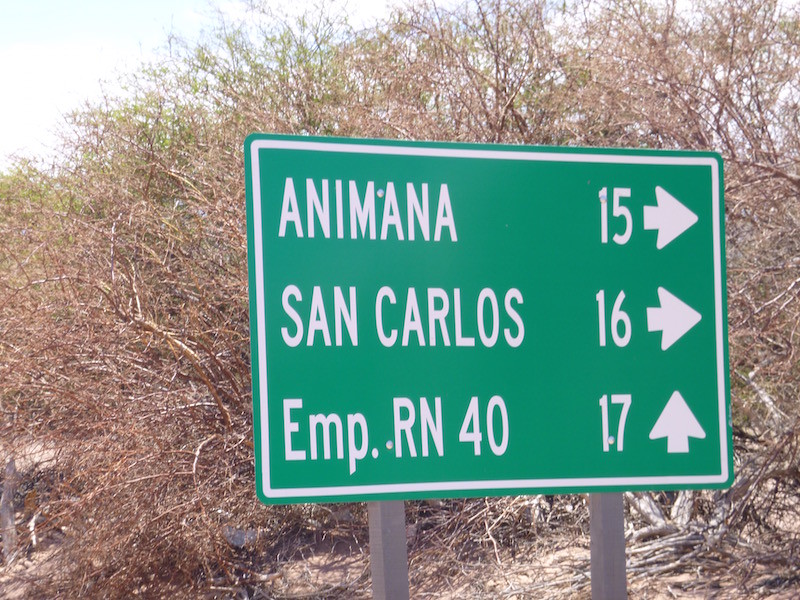 Do you think the people of Animana are called Animaniacs? Sorry, couldn’t resist.

And then, just before Cafayate, the vineyards appear again.

Vineyards line the road on the way into Cafayate. Parts of this area remind me of some of the roads in central Italy and southern France that I’ve ridden.

An impressive estate vineyard just outside of Cafayate.

Cafayate is all about vineyards and wineries. There are a number of wineries here, offering tastings, and the town square is literally ringed with sidewalk cafes.

Lots of tents in this campground. Unlike most everywhere else, I didn’t hear a word of anything except Spanish. These are mostly Argentine nationals, enjoying their own country.

In the campground, I met this Argentine couple, touring their country two up, and pulling a homebuilt trailer behind their 150cc Yamaha FZ. He told me they hope to visit Chile and Peru on it next year, and possibly further north. So the next time you tell me you need a 1200cc bike to do this trip two-up, think of these two.

5 thoughts on “Argentina! A Long Day and Another Lesson Learned”