Leaving Quito, I decided to take the “Long Way Round” (sorry for the pun) and head east, then south through Tena to Puyo before turning back west to get to Baños. It’s about four times longer this way, but it’s also a road or two that I didn’t want to miss. And besides, I’m going to ride most of the way back towards Quito on the other road tomorrow anyway.

Climbing out of Quito, the road very quickly starts a climb that is much steeper than it appears. I could only manage about 40 kmh (about 24mph) for a good portion of the climb due to the steepness and the elevation of just over 12,000 feet.

Cotopaxi in the background, completely white with snow. This volcano erupted in August and is still going.

It might not look like much, but this is a steep climbing highway for miles between Quito and Papallacta. And yes, these are bicycle lanes on the side of the highway. My XT250 was unhappy climbing at over 12,000 feet, and apparently enough people do it on bicycles that they built lanes.

This highway heads into Amazon country, and once past the highest (and coldest!) point it descends into lush Amazonian forest and jungle.

One thing I’ve noticed on this trip: As I’m riding along and see something worthy of taking a photo, inevitably there will be power lines along the edge of the road. So, if you look beyond the powerlines, these are the Cascadas de las Tres Marias.

I lost count of the number of amazing waterfalls early on. It seemed like there was another every half mile or so, and in Baños they have the Ruta de Cascadas, or Waterfall Route that people primarily tour on rented bicycles.

They’re everywhere….the waterfalls AND the powerlines.

In Baños, I stayed at the Magic Stone B&B, which I have to say is not only the nicest place I’ve stayed on this trip, but the hosts, Danish couple Ove and Aase are incredible. They’ve lived in Baños for a long time and are a wealth of knowledge, very welcoming, and they make a great breakfast too! 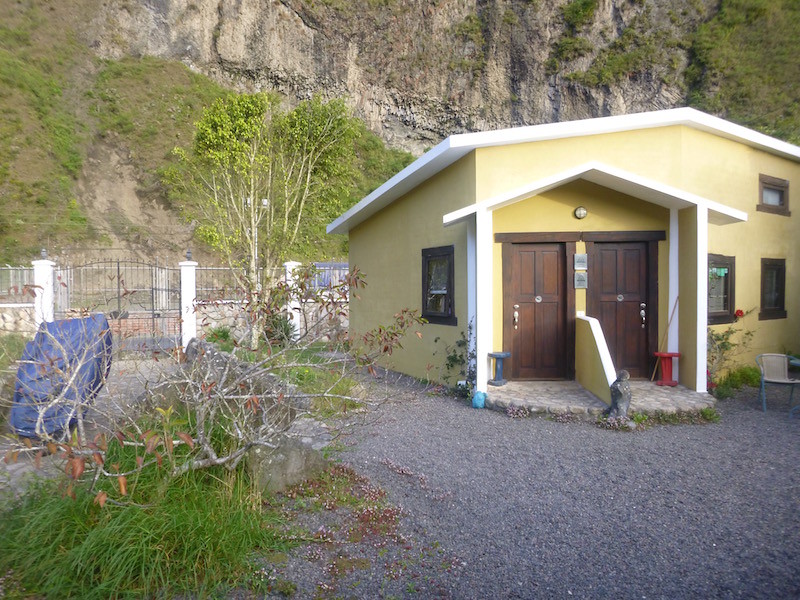 After checking in, I decided, at Aase’s suggestion, to cross the San Francisco bridge and climb the mountain to the towers at the top for a view of Baños from high above.

San Francisco bridge. Baños is an adventure sports town, and in addition to whitewater rafting, paragliding, etc, you can bungee off of this bridge.

Looking back across at Baños from the bridge. 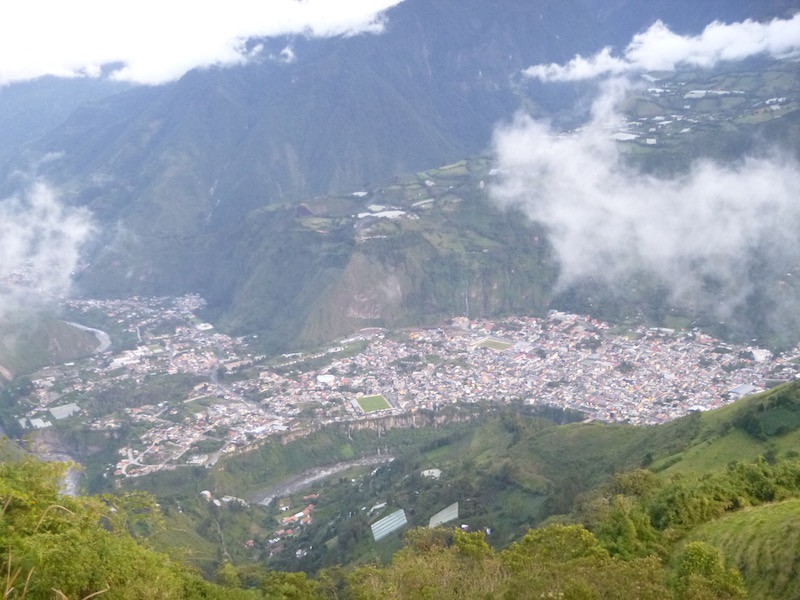 Looking down on the city from above. Unfortunately the clouds swept in before I got to the top, and I was unable to see the Tungurahua Volcano. On clear days (and especially nights) you can see the flames and hot ash spewing from the volcano. An added plus for the trip to the top: I met Gorm and Elisabeth, who are 13 months into an 18 month trip in their VW bus, having started in North America. They plan to ship it home to Germany from Uruguay in March. I’m considering stuffing my bike in the same container. Time will tell.

As I started to turn around at the top of the mountain, something caught my eye in a pasture that extended to the edge.

See the house in the middle of this photo?

Here’s a closer view. I want to live here.

Coincidentally, one of the things I came to Baños to see was “Casa del Arbol” (the Treehouse), but this isn’t it. It just happens to be another treehouse. Apparently people here like their treehouses.

Here’s Casa del Arbol. I rode there this morning. If you could zoom in on the photo above far enough, you might be able to see Casa del Arbol on the mountain to the far right. Famous not so much for the treehouse, but for the swing attached to the tree. 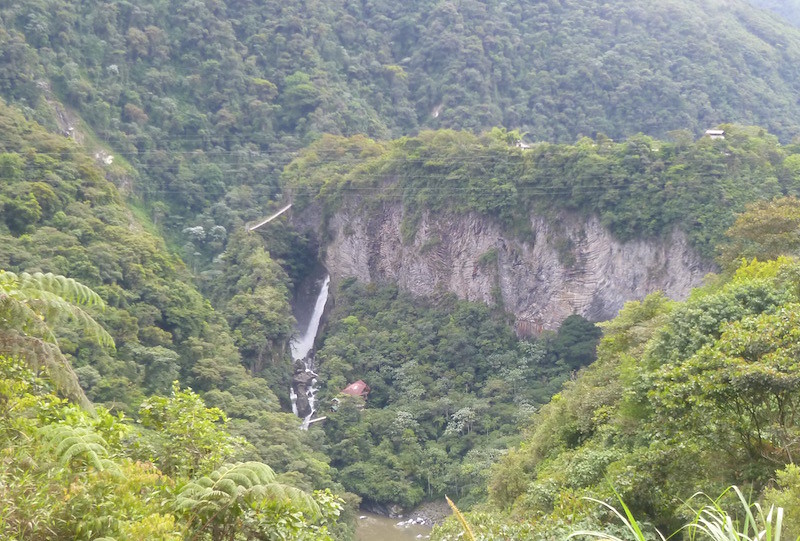 Very impressive waterfall. The volume of water is amazing.

Note the buildings at the bottom, and the swing bridge at the top.

There are four or five long tunnels between Baños and Rio Verde where Cascada El Pailon del Diablo is located. The tunnels have only been around for twenty years or less. The original road went around the outside edge of the mountain, and was one lane wide and paved with pavers and cobblestone. That road still exists, and if you pay attention, you can turn off before the tunnels and take the old road around the mountain, which is much more interesting. 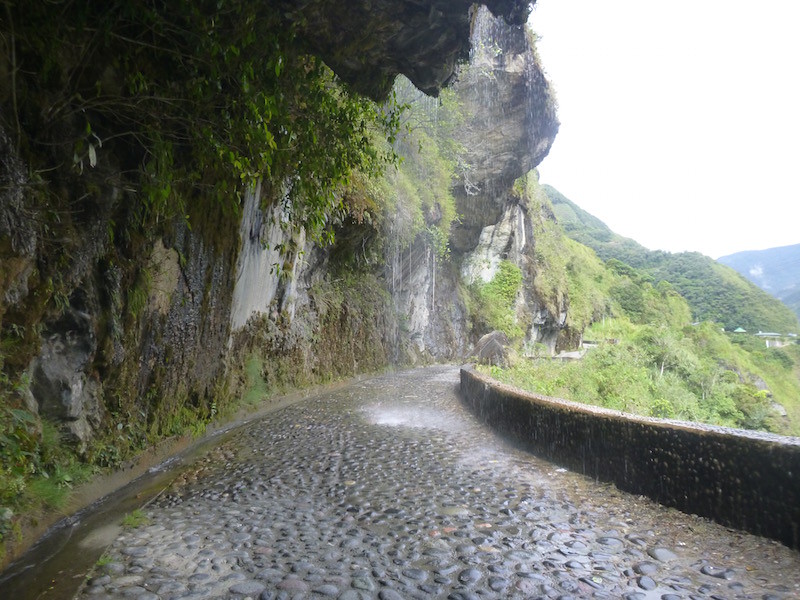 The old road, before the tunnels. No longer in use, but still there if you pay attention. Not all of the waterfalls miss the road.

Baños itself is very much a tourist destination. There is so much natural beauty in this area and outdoor activities, that the city has managed to recreate itself as an adventure tourism hub. This of course is good and bad, as I’m not a fan of hanging out in a town full of tourists. Fortunately the Magic Stone is on a hillside above the town, yet only a five minute walk into town for dinner.

On the east end of town near where I’m staying is the Virgin’s Falls. 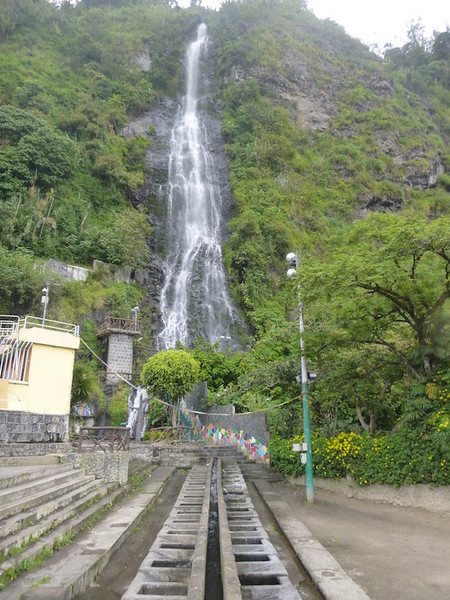 These falls feed directly into a large series of stone sinks which are used as a community laundry.

Laundry day? Load up and head to the sinks at the base of the Virgin’s Falls.

As I write this the clouds have cleared and I am sitting on my front porch watching Volcan Tungurahua belch ash. It’s been doing this for years now.

Tomorrow I am off to get a better view of more active volcanoes.