While housesitting near Aylesbury, we realized that we were only about fifteen miles away from Bletchley Park in Milton Keynes. So we jumped online and bought a couple of tickets for the tour and rode over the next day.

If you’ve seen the movie The Imitation Game, you’re familiar with Bletchley Park. It’s the real deal. This was the place where some of the brightest minds in Britain came in the early 1940s to try to break the code of the German cryptography machine Enigma and later Lorenz.

The manor at Bletchley Park. This place was vacant after the widow of the owner died, and sold at auction. It included the manor house, with 27 bedrooms and eight bathrooms, a ballroom, a billiard room, and more. A developer bought the property, but shortly after the British government secretly bought it and turned it into a top secret code-breaking effort, employing up to eight thousand people at the height of the war.

A number of “huts” were built on the property. The workers in each hut had a specific job duty, and were not aware of what was happening in the other huts. This secrecy prevented even the people who worked there from knowing the overall mission. Intercepted encrypted German messages would be brought to Bletchley by couriers on BSA motorcycles, and delivered to one hut. Of course the couriers had no idea what they were delivering. The workers in the hut receiving the messages would organize the coded messages and send them to the next hut, which would have a different duty. Another hut would translate any deciphered messages from German to English and pass it on to the next hut, and so on. The secrecy between huts was such that a passage was built between two huts, and the messages were passed through this wooden passage into the office above, through the sliding door in the wall.

A reproduction of a German Enigma machine. Poland had achieved some success at breaking Enigma codes just before the war broke out in 1939, and their work was the foundation of the British effort at Bletchley Park. 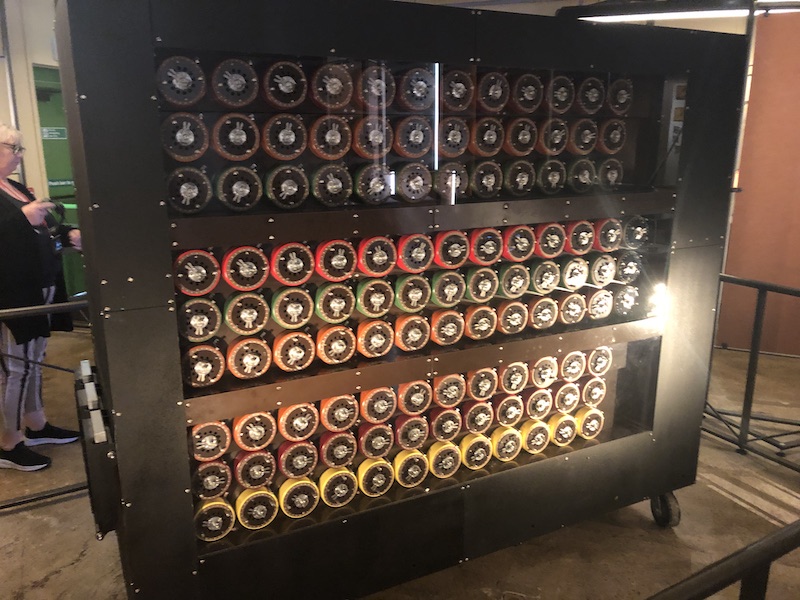 A reproduction of Alan Turing’s Bombe machine, which ultimately allowed Britain to decipher encrypted German messages in as little as two and a half hours from receiving them. It took this Bombe machine less than twelve minutes to test all 17,756 possible combinations of the rotors in the Enigma, and arrive at the correct settings. As mentioned in the movie, it was the inattention to required German procedure by the Enigma operators, such as re-using a prior day’s rotor settings, or the operator setting the rotors using his girlfriend’s initials, that allowed Turing and his team to more quickly break the code. 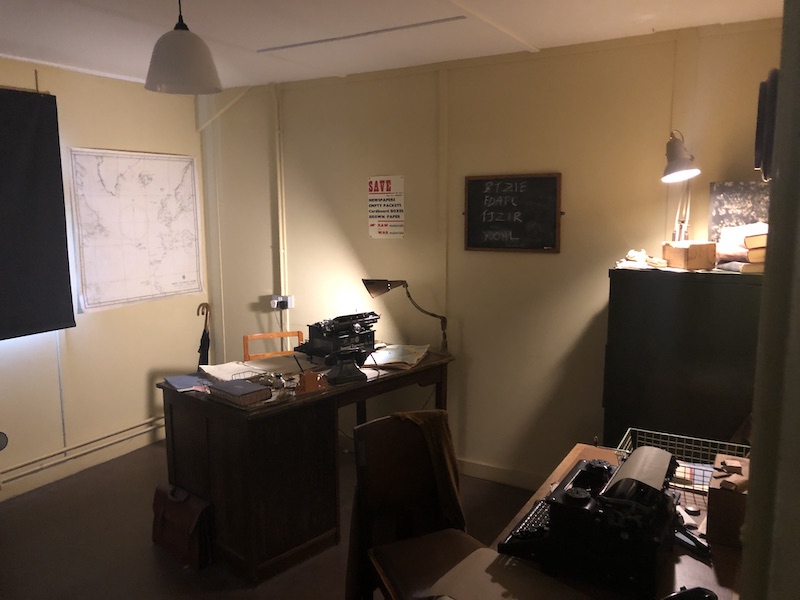 In what was then the Motor Pool, the current museum has several vehicles displayed, including this 1947 Sunbeam Talbot that was owned by Mick Jagger and was used in the 2001 movie “Enigma”, which was produced by Jagger’s film company.

Bletchley Park is a large place and a magnificent piece of history. It wasn’t until the 1970s that it was finally revealed what actually took place here. It’s hard to believe that just thirty years ago it was in complete disrepair and was about to be razed by a builder to be replaced with houses. Thankfully people who saw the historical significance of it stepped in and saved it.

If you go, keep in mind that it takes a few hours to properly tour the facility and explore all of the exhibits.

After leaving Bletchley Park, I decided now was a good time to get the bike washed. Due to the current drought situation in England, the coin-operated type of self car washes were not available, but I found a hand car wash that claimed that they also washed lots of motorcycles. So I wheeled it in…

Here’s the bike being given the “Hard Wash” as I was told it was called. I’ve never seen that much soap, but it did a good job of removing four months of grime.

After the bike was rinsed off, I was asked to move it forward to the drying and detailing area, where it was hand dried. Then a guy walked over with a gallon bucket full of Armor All and a large paint brush, and proceeded to paint my tires with extremely slick liquid. Having just recently slid down the freeway in a diesel spill, this was horrifying. It took me a good ten minutes with dry rags to scrub all of the Armor All off of the tread surfaces of the tires, and even then I rode very gently home.