Highway 3S from Huancayo to Ayacucho is mostly a one-and-a-half lane wide paved road following the Rio Mantaro. It’s a fun ride, and the scenery changes considerably from one end to the other, beginning with pampas and plains at 11,000 feet and slowly descending to around 7,000 feet elevation and more of a desert look, with cactus and scrub.

It’s not a particularly busy road, but there is the occasional car, bus, or truck. 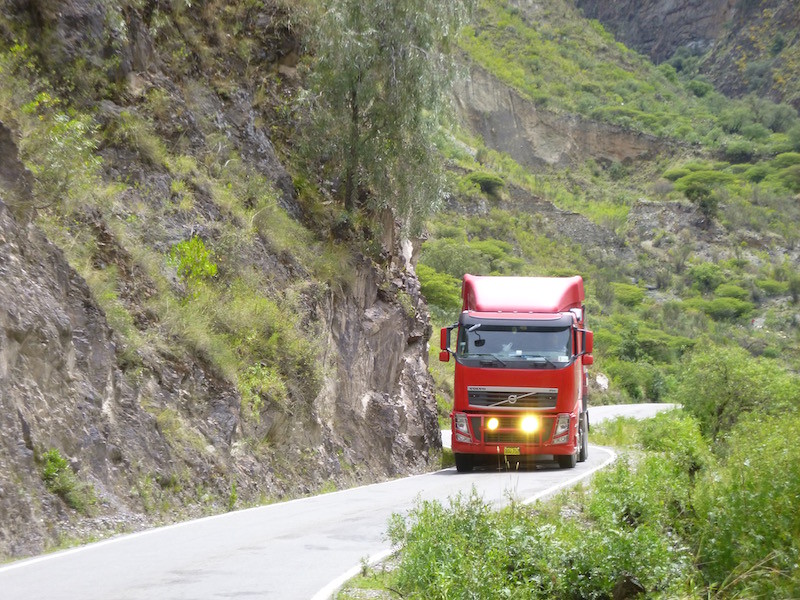 Yes, this is considered a major highway. In addition to PE-3S, it’s also known as the Carretera Central, or Central Highway. This is THE route south in this part of Peru, and between Huancayo and Andalhuaylas (about 300 miles), it is mostly narrow, often one lane, full of blind turns and switchbacks. Not exactly Interstate 5 in California, or I-35 in Texas. Although people try to drive like it is. 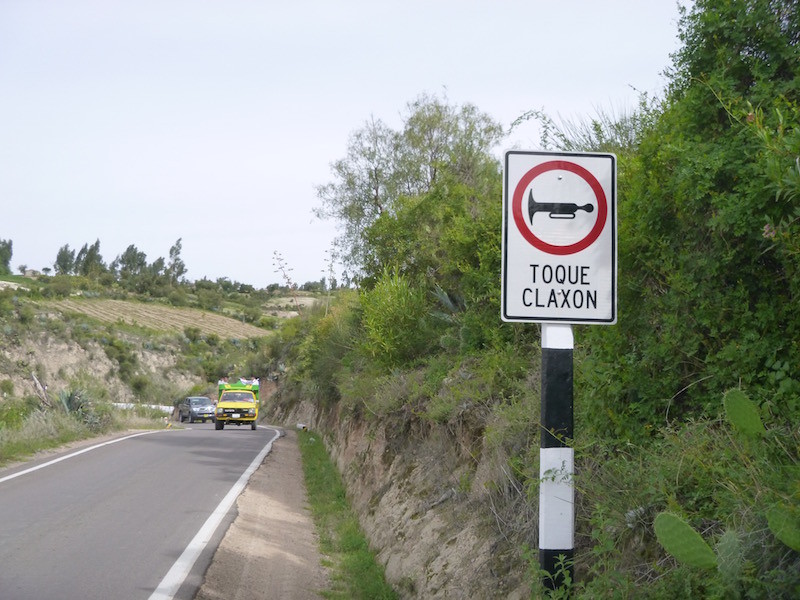 Many of the corners have this sign as you enter them, and most people abide by the sign and honk as they enter the blind turn or switchback. That’s about all they do is honk; they don’t slow down at all. As if somehow honking deploys the anti-collision shields. Judging by the number of memorials on the side of this road, I’d say honking while entering a blind corner at 40mph doesn’t work that well. 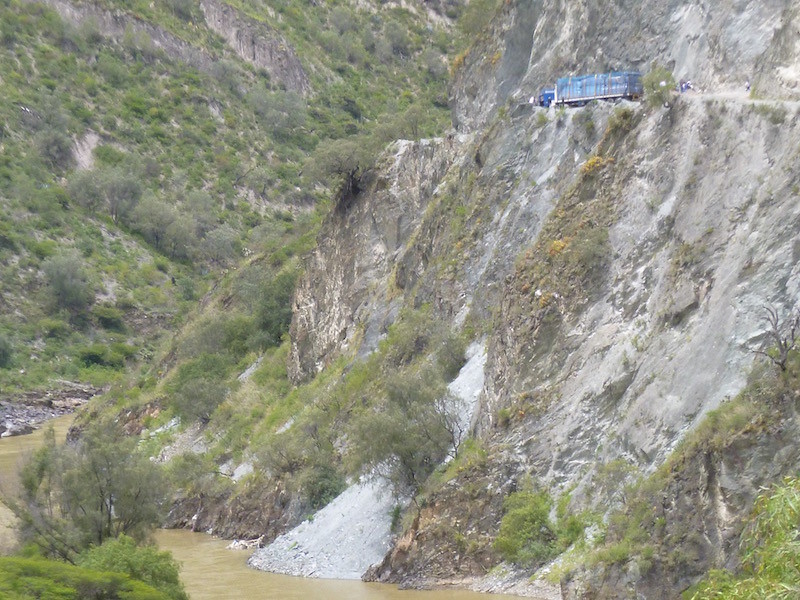 Here’s an example of what I’m talking about. The blue truck was in a bad position, angled and blocking the road. As I came around in the opposite direction, I was able to squeeze between the mountainside and the rear wheels of the truck and get through. No one else was going anywhere. There were a number of vehicles parked both ahead and behind the truck and people standing around the truck, and it looked as though the truck had either been in an accident, or tried to avoid one and ended up skewed across the road. As I got further down the road, I looked back and took this photo. Not sure, but I think that may be a crumpled vehicle in the water just to the left of the gravel slide.

There are several bridges across the river. This one had a nice look, steel plates covering wood rails for traction, and no guard rails.

Past Ayacucho the road (now PE-3SL) continues to be a lane and a half wide, but the pavement improves as does the scenery. Overall, I’d have to put this road in my top 5 of the trip. It’s fun, but gets tiring between the nearly constant curves for hundreds of miles — which means an average speed of around 28 mph — and the need to  be very vigilant for oncoming traffic.

I pushed myself too far today. I had originally planned to stop in Ayacucho, but as it was only 2pm, I decided to keep going and try to make it all the way to Andahuaylas. And of course I was reminded of another important GPS lesson: when you enter the location in Garmin, it tells you how far it is to that location, as the crow flies. Example: after leaving Ayacucho, I entered the waypoint for Andahuaylas. Garmin said 68 miles. which is about 150 road miles. All those switchbacks add a lot of miles when you’re not a crow.

So just before dark I finally admitted to myself that I wasn’t going to make my destination, and began looking for a place to camp. As I rode into Chincheros, I spotted what looked like an off-road truck race track a few hundred feet below me near the river. Nobody there, and the green grass looked like the perfect place to pitch my tent. But just as I was going to turn off the highway to head down there, I spotted a hotel on the left with a large gated parking area. So I took it. Which was yet another mistake for today. The tent would have been much more comfortable. Oh well, if all goes as planned I’ll be in the tent tomorrow night.