The problem with GPS trackers is that they don’t work if you don’t turn them on. So it was today that I arrived in Flores, Guatemala before realizing that I had apparently never turned the tracker on before leaving Tenosique, Tabasco, Mexico. Oh well. I’m still here, just no longer there. Sorry for the gap in my track. Rest assured it will happen again.

The ride to the border at El Ceibo was quick and uneventful. The road is freshly paved and smooth, and the hills and scenery reminded me of Hawaii. Beautiful green, large mounded hills, some stripped of trees but covered in green, others still covered in trees.

The aduana (customs) and immigration on the Mexican side is a fairly new set of buildings. The Guatemalan side is actually a portable building and a trailer. But the people on both sides were very friendly and helpful and the process went smoothly, taking a total of about an hour and a half to check myself and my bike out of Mexico and in Guatemala. The CA-4 vehicle permit I was issued is good for 90 days and covers Guatemala, Honduras, El Salvador and Nicaragua. Seeing as how I need to be in Panama by the first week of October, this should do fine.

And the El Ceibo, Guatemala aduana office now has a shiny new “2RideTheGlobe” sticker on their souvenir wall.

It was a fairly short day. I rode about 140 miles total, only 90 of which were in Guatemala. I pulled into Flores, which is actually a small island in Lake Peten-Itza, early afternoon and began looking for my hotel. It took me two and a half laps of the island before I found it. My GPS kept telling me to turn the wrong way down a one-way street, which, upon further inspection, turned out to not really be a street at all. At least not any more. 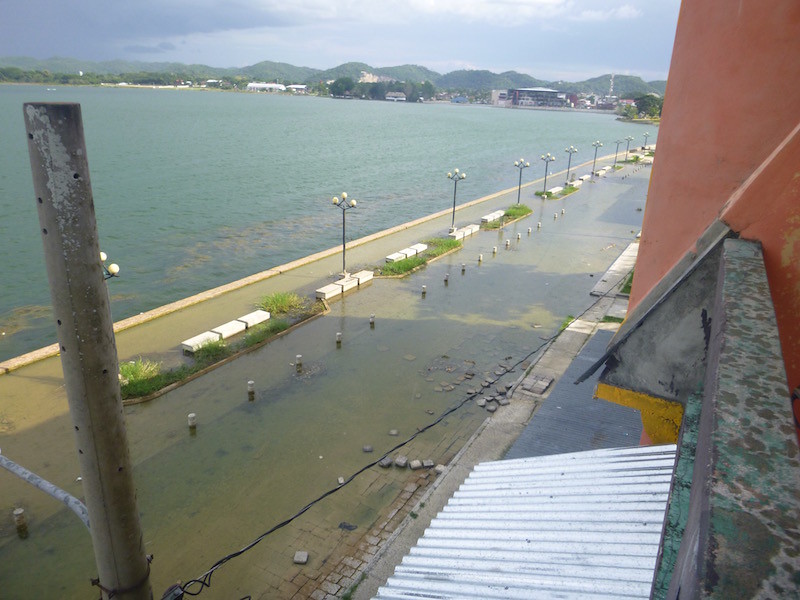 Calle 15 de Septiembre is a little low, apparently. Can’t get there from here.

In keeping with my budget, this hotel is no-frills. And no soap, and no towel, and no tv, and no air conditioning, and a lot of other nos. Which got me to thinking about things that we come to expect when we check into a hotel in the U.S. Even a budget hotel. Like: 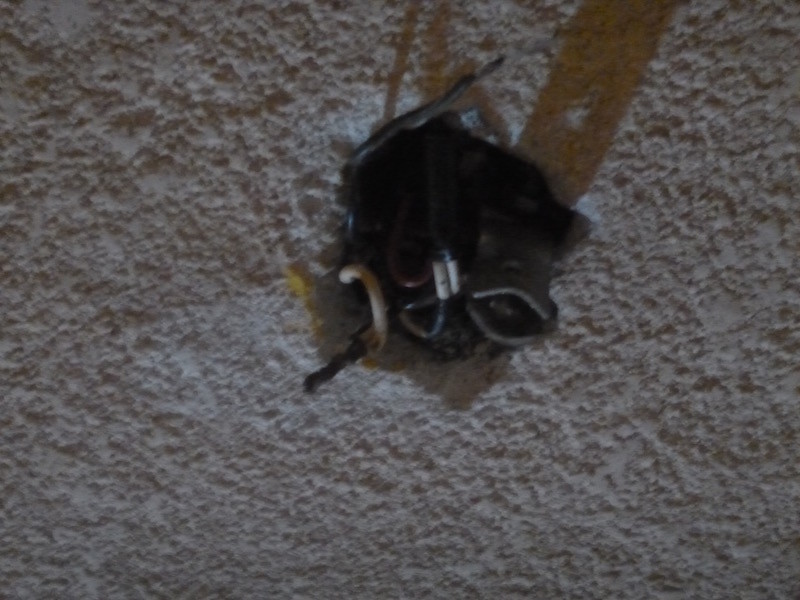 A ceiling fan, or maybe just a cover plate over the electrical box where the ceiling fan used to be. 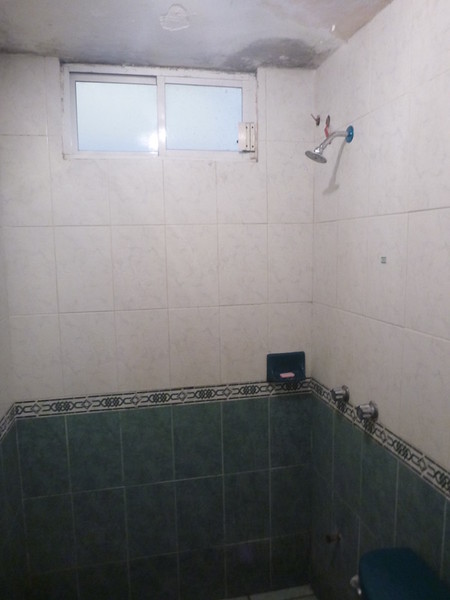 A limited amount of mold.

Some basic consistency with how HOT and COLD work.

A toilet seat. And toilet paper. And a sink that hasn’t been patched with a huge chunk of bondo. 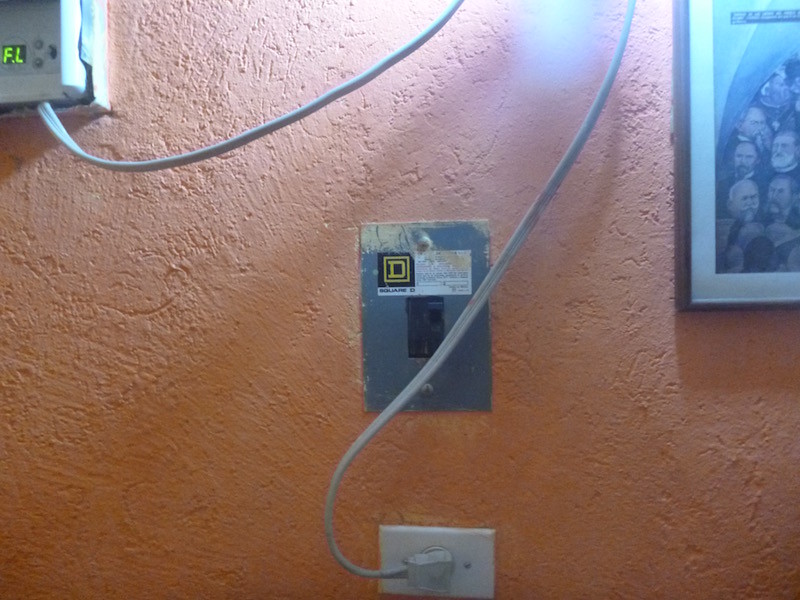 A thermostat, if AC is included. Most hotels I’ve stayed at lately, like the one above, just have a breaker box. 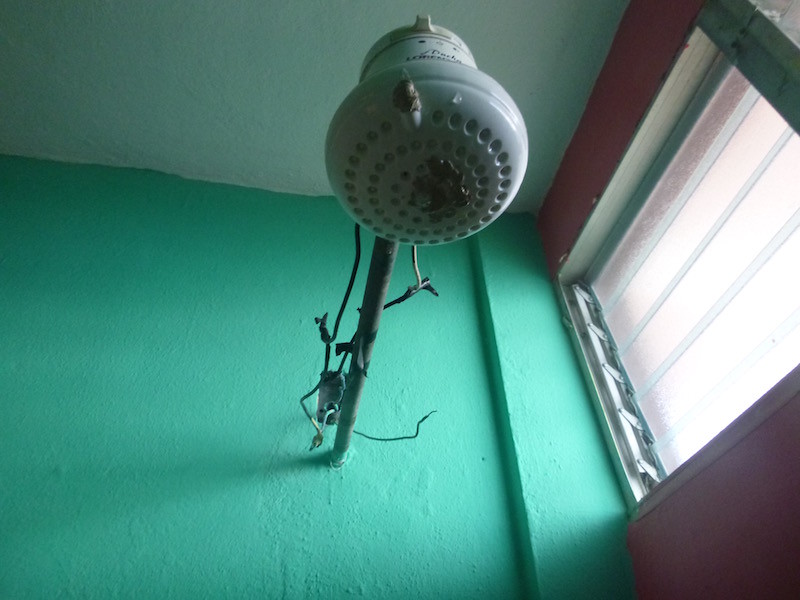 A lack of bare electrical wires in the shower. Yes, this is real, and where I am staying now. The showerheads heat the water. If they are connected. And grounded. And the electrical tape holds. If not, well, you’ll definitely be warm.

Oh we are so spoiled. And so demanding. Life here is simple. Don’t worry about all that stuff. You don’t really need it.

I had a great tuna sandwich at a place down the street called Cool Beans. 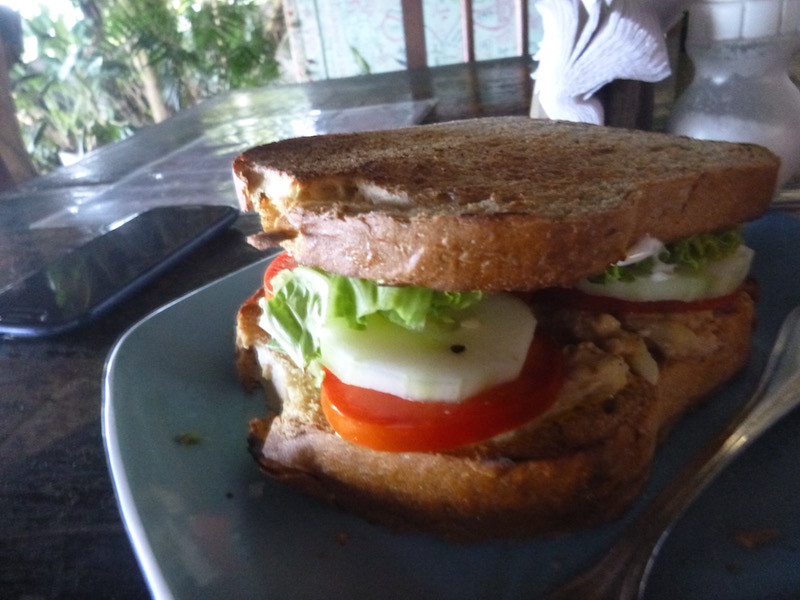 I wasn’t planning to eat there. I was actually headed to a place further down the street, but as I passed Cool Beans, I happened to notice that all of their signage was in english. So I figured what the heck. The owner spoke decent english, but I don’t think his wife did. But it was a good marketing hook. This place is close to Tikal, so there are a lot of people from Europe and the States here to see the ruins. The watermelon licuado (smoothie) was pretty good too.

I’m in tourist central here, so the prices aren’t that cheap. But I’m still within budget. I thought about camping at Tikal tomorrow night, but the humidity here is pretty severe, and it rains in the afternoon. So I’ll probably just stay here again tomorrow night before heading towards Semuc Champey.