In preparation for crossing into Tanzania, I decided last minute to spend one more night in Malawi, a little closer to the border, and get an early start for the crossing. I’d been warned that the border crossing can take quite a while, and it’s a good 490 kilometers to my next camp from here, so tomorrow would be a long day. 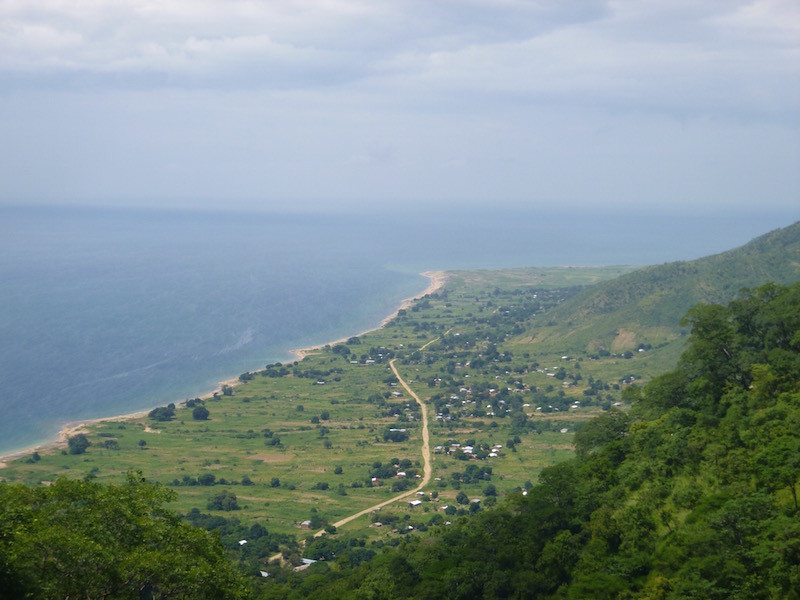 North of Mzuzu I passed through a mountain valley that eventually broke out to the lake. Just after I took this photo and put the camera away, I rode around the corner and into dozens of monkeys and baboons that were just sitting in the middle of the road. They didn’t move when I approached. I had to weave between them. It was a very odd feeling. I wished I had the GoPro up and running.

I found a campsite and lodge on Lake Malawi near the town of Chilumba, just 100 miles north of Mzuzu, and about 75 miles south of the border. Founded by Mark, a British ex-pat, and his wife, a Malawian doctor, it had fallen into disrepair after being leased to new operators until Mark moved back from Lilongwe and took it over again. He’s making strides in getting everything up and running smoothly again.

This is the “road” into Sangilo. There are places where it’s barely more than a footpath for a kilometer or so. Hard to tell from the photo, but the last bit is fairly steep down into the camp. That’s the lake in the distance.

The bed as well as the bar at the beach are hand-carved with scenes by a local craftsman. Incredible detail. I wish I could hire the guy and ship some of this stuff home.

View from the cabin deck.

Electricity is shut off around 9pm each night and it gets really dark. Use extreme caution getting off the toilet in the middle of the night…

I was unaware until I arrived that Ewan McGregor and Charley Boorman had stayed here during their filming of “Long Way Down”. Mark mentioned that a number of motorcyclists have stayed here, but nearly all have been on BMW 1200 GS’s. He was quite surprised to see my XT250, and even more so when I explained that I had already ridden it to the bottom of South America and was on my way back up Africa now. It’s still fun to see the reaction on people’s faces when they hear this. Usually it takes two or three times before they seem to grasp or accept that I’ve done this on the same 250cc motorcycle, with no major mechanical issues. For some reason, most people initially think that I bought the bike in Cape Town and started from there.  Even after explaining, they have trouble with the idea that I’m on the same 250 that I rode the length of Latin America.

About 4am the wind began to blow and the rain started. The rain didn’t last long, but the wind continued through the morning. Skies were dark and the waves on the lake increased.

Storm brewing in the morning.

The bad weather was coming from Tanzania, so I decided to hang around another day. Mark offered the use of his workshop to change my oil, so I rode into the local village to buy some oil, but finding only the local brand (Stanley) straight 40 weight mineral oil, I decided I could wait a little longer, and would look for oil in Karonga, about 70 km up the road, tomorrow.

One thought on “Chillaxin’ in Chilumba”