From Greybull, Wyoming, we were headed towards the Black Hills of South Dakota. But we stopped a bit short of Deadwood at the Devils Tower. This large rock butte is probably most famous from the 1977 Stephen Spielberg movie “Close Encounters of the Third Kind”. The campground below the base of the tower shows the movie every evening in an outdoor theater that faces the tower, so you can see it on film and you can see it IRL just above the screen at the same time. 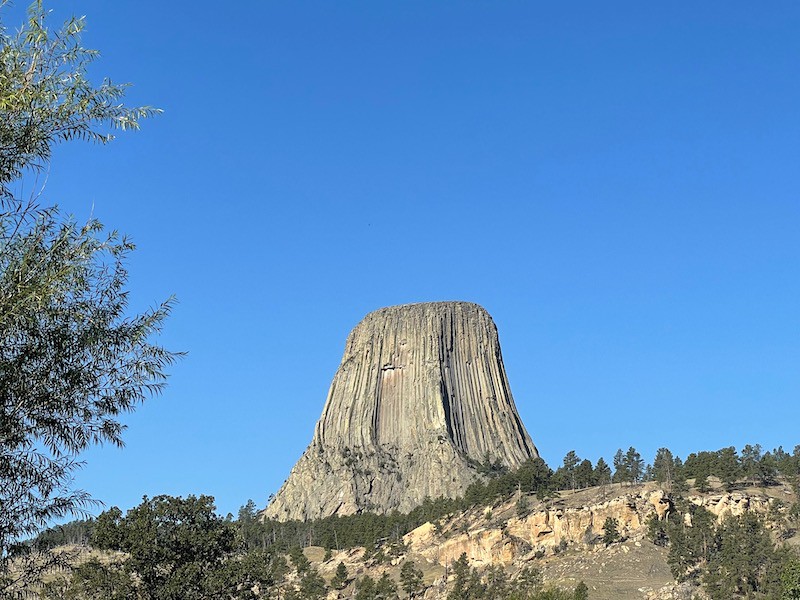 The real Devils Tower, not the mashed potato one. 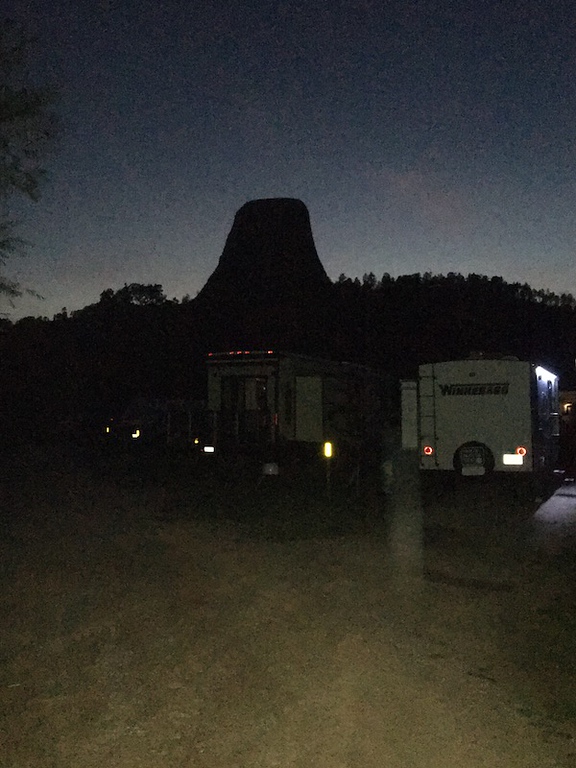 View from our campsite at night, while waiting for the UFO.

These prairie dogs were all alongside the road. They were larger than the Arctic Ground Squirrels that we saw in Denali, which makes them more like a 4-topping pizza, I guess.

I began to wonder, what is it with America’s obsession with the devil and rockpiles? We have the Devils Tower, and the Devils Postpile. Both are in beautiful areas often referred to as “God’s Country”. So what’s up with this?

The 1267 foot tall butte is known by many names, but most locals (Lakota) refer to it as Bear Lodge, and there are many local legends about its’ formation. Many have to do with a giant Grizzly bear chasing little girls. One explanation as to its’ satanic name is that during an expedition in the 1800s, an interpreter for Colonel Richard Irving Dodge misinterpreted the Lakota word for Bear as meaning “Bad God”. Thus Devils Tower.

Devils Tower is America’s first National Monument, having been established by President Theodore Roosevelt in 1906. Spielberg’s movie forever casts Devils Tower in a different role. Now the campground has a miniature golf course with aliens standing watch, and there are “UFO Parking Only” signs.

By the way, the music for Close Encounters was composed by the same person who wrote the music for Star Wars and Jaws, and with whom I share a last name: John Williams.

In the next two days, we will play “Speed Tourist” and visit multiple tourist attractions…something we fairly rarely do.