Until just a few years ago, I didn’t drink coffee. I always drank a lot of Coca-Cola. Then someone (who shall remain nameless to protect the guilty) got me hooked on coffee. Although to be honest, I still knew nothing about it. I had no idea what a macchiato was versus a latte, or what made one coffee good and another less so. I knew about as much about coffee as I do about wine: in other words, nothing. I knew what I liked but that’s about it.

So when I found this coffee shop in Cape Town called Truth Coffee, and saw that it had a Steampunk theme, and read that it had been named the Wold’s Coolest Coffee Shop by the UK Telegraph, I decided to put it on my list of places I wanted to visit while in town. Then I discovered on their website that they offered barista courses as well as a half-day “Coffee Appreciation” course that would help me understand coffee. So I signed up.

The inside of Truth Coffee is done in a Steampunk theme. Very interesting. Unfortunately they had a water pipe burst the night before my class, so the restaurant was closed when I got there, but I was able to get a few photos.

Huge coffee roaster in the middle of the building is a focal point. Built in 1913, it’s still in use here at Truth. 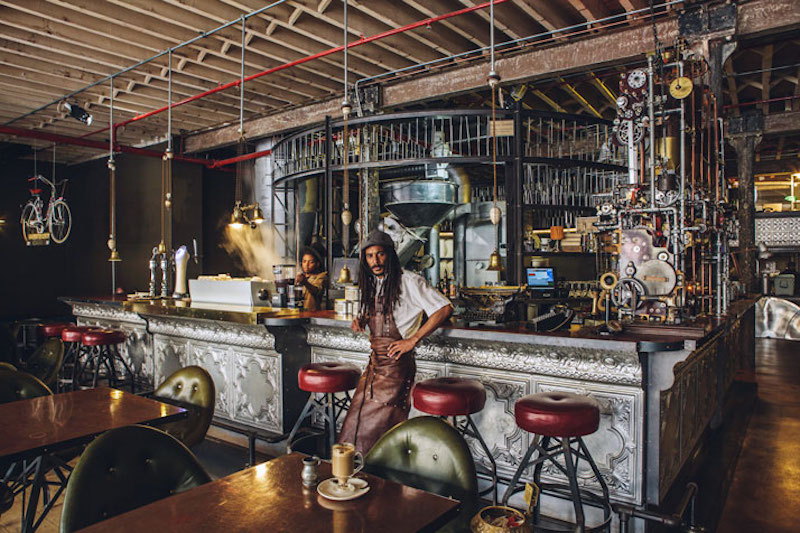 The instructor for the course is a fascinating guy in his own right. José Vilandy was kidnapped at 11 years old and forced to become a child soldier in his native Angola. Several years later, he escaped, and eventually made his way through refugee camps to South Africa, where he went to college and earned a civil engineering degree. Not long after that, he discovered that he had an interest and a love for coffee that he could pursue as an occupation. In 2008 he won the National Barista Championship in South Africa. 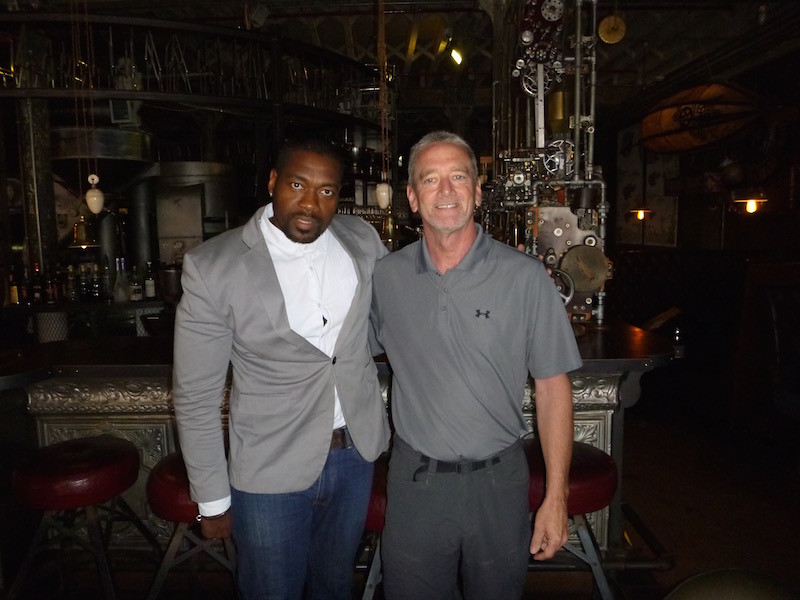 José Vilandy of Truth Coffee. Taught me more about coffee in a couple of hours than I would have learned on my own in years.

I had a great time in this course learning about different coffee types, “cupping”, grinding, brewing, and using a commercial espresso mahine. I’m certainly no barista now, but I have a much greater appreciation for what I am ordering and how it’s made, and when it’s done right. They ought to franchise this place. It is way more interesting than Starbucks.

As I was leaving Truth, I happened to spot a guy riding up on a brand new Honda Africa Twin.

He was headed to Truth, but was unaware of their closure due to water problems. I spent a few minutes checking out his bike and talking about my trip with him. The Honda was nice and narrow (although it looked tall), and looked like a good size for a 1000cc adventure bike, though still much more bike than I’d want or need to take on this trip solo. I have to admit though, for a large motorcycle, they definitely got some things right, like the 21 inch front wheel, the narrow tank/seat junction, and what appears to be a good center of gravity. It’s definitely a nice looking package.

Then, on the way home, I stopped at a McDonald’s (yeah, yeah, I know…) and I spotted this:

Yep, in South Africa they have McDelivery, just in case you are already so fat that you can’t even get off the couch to go to McDonalds.