From Playa Maderas, it was only about an hour to the Costa Rica border crossing. The border crossing was a relatively straightforward affair, aside from the rain and a certain customs official who was apparently having a bad day. Total time spent at both the Nicaraguan and Costa Rican immigration and customs offices: approximately two and half to three hours. With all of the rain, I’ve been taking very few photos.

Not far from the border in Costa Rica is Santa Rosa National Park. Once again, the plan was to camp here, and try to amortize my lodging budget. The sign at the entrance to the park said the entry fee was $10 and the camping fee was another $2. That put it well within my budget. But better yet, it’s the off-season and mid-week here, so there was nobody present and no way to pay the fees. I figured perhaps on the way out in the morning I would meet the park ranger and pay, but again there was nobody, aside from one couple camping and a classroom of grade school students and their teacher that showed up early in the morning.

Early in the evening of my first day in Costa Rica, I had two thoughts:

It rained a bit during the night so I had to put the rain fly on the tent, making it a bit more humid. By morning it had stopped and cooled off a bit, but remained very cloudy. After breakfast and packing up, I headed towards Lake Arenal and Volcan Arenal. Highway 142 goes around the east side of the lake, and provides some great views and a fun ride.

Lake Arenal, Costa Rica. The low clouds and rain prevented a clear view of Volcano Arenal, but even the rain couldn’t keep me from smiling at the great road and scenery.

The abundance of ex-pats is obvious as all of the signs are in english, from real estate signs to store signs.

Unfortunately, the rain continued and the clouds stayed just above the lake, shrouding the volcano and making photos difficult.

The rain stopped for about ten minutes in Nuevo Arenal, so I decided to stop for groceries. Just coming into town I met another loaded bike heading in the opposite direction. Ignacio, from Chile, has been traveling for a year on his Suzuki DR650, and is headed to Alaska. 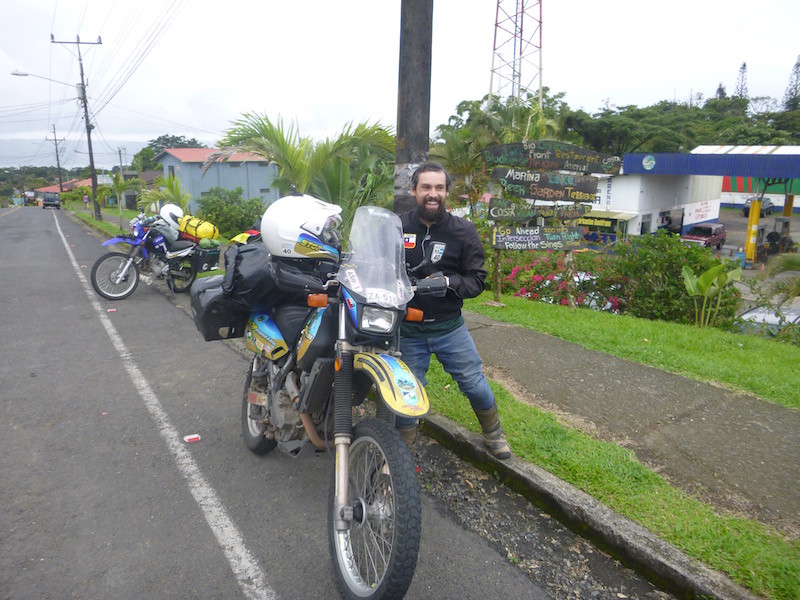 While in town for just a few minutes, I also met a Canadian who has lived here for ten years, another gentleman from Europe who clearly has been here quite a while, and a couple from North Carolina who spend six months a year here and mentioned they have several neighbors here from Texas. The area around the lake is gorgeous. I can understand why so many people would move here.

Just past the dam at the entrance to the Volcan Arenal National Park the road splits. The road along the other side of the lake is dirt. Fortunately it’s fairly well maintained, so the rain wasn’t too much of a problem. A little further down the dirt road is the small village of El Castillo. It was getting late, so I stopped at Cabinas Orquidias for the night. On the way up the hill to El Castillo I had to stop and gawk at the dozens of howler monkeys in a few trees at one turn on the road. 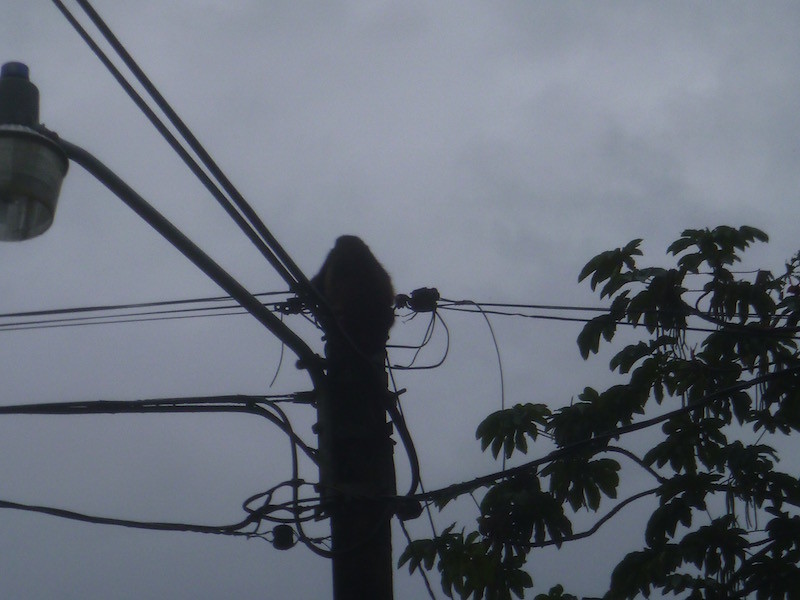 Bad photo, but that is a howler monkey sitting on top of the utility pole.

The family at Cabinas Orquidias was incredibly nice. Besides renting me a beautiful, brand new one bedroom house with covered carport and one of the nicest bathrooms I’ve seen in a month for $30, they brought me a coffee maker and coffee from their house, offered me bread and even offered to let me come use their computer in their house since they didn’t have wi-fi in the rental yet. I politely declined. Sometimes the lack of internet access can be a very peaceful thing.

The kids were in school when I left in the morning, but Mom and Dad were happy to pose for me before heading out. This place is worth the stop, and I would recommend a couple of days here to explore the area. So much to see.

In the one-street town of El Castillo is the Eco-Zoo, which is really more of a snake farm with frogs and turtles and a few other local critters thrown in. I probably should have passed, but the hour long tour was extremely informative and will no doubt make it hard to camp from now on. Or at least I’ll think twice before stepping out of the tent in the dark.

I can’t remember the names of all the different snakes I saw at the eco-zoo in El Castillo. About half of them were venemous, and some were very large. This was one of the smaller examples.

Much larger examples. The albino python on the left was climbing up the window. The other python in the lower right is actually larger than the albino. These two were huge.

We were allowed to hold these red-eyed tree frogs.

Large selection of lizards at the zoo also. 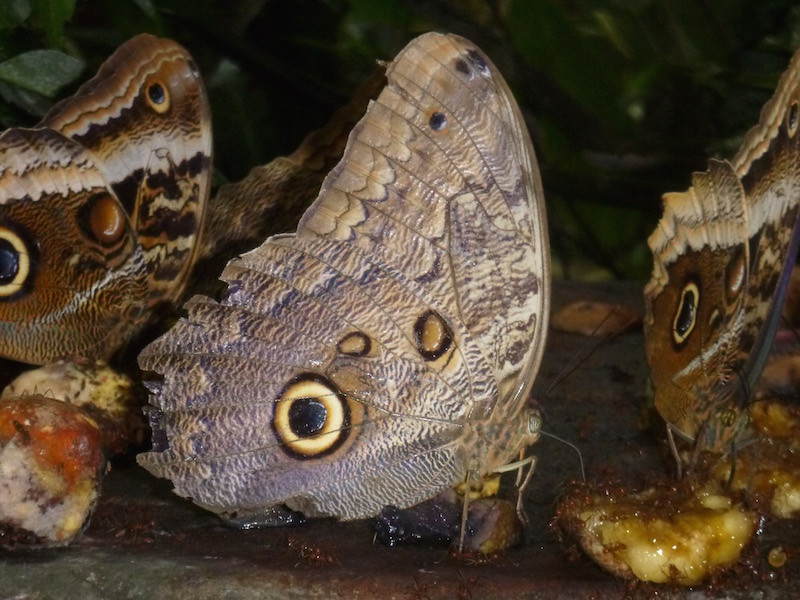 These are the biggest butterflies I’ve ever seen. Just huge.

Of course it was raining the entire time I was looking at the critters. I think maybe I finally found the rain in Central America’s rainy season. They’ve been in drought conditions, but around Lake Arenal, it seems to be less so. This was day two of real rain.

2 thoughts on “Costa Rica: Is It Finally Really Rainy Season??”