Our wi-fi signal for the past several days has been too weak to upload photos, so we finally rode into town today and found a strong enough signal to upload enough photos to do some catching up on the blog. So here goes…

It had rained every night, and a bit during the day, for the past several days, and we once again found ourselves quickly packing up a damp tent to try to beat the rain out of Omaha Beach. Today would be a 250 mile ride to Calais, to catch the Eurotunnel train under the English Channel to England. We ducked in and out of rain clouds all day, and had a bit of wind, though nothing like Croatia. The countryside was mostly green rolling farmland, dotted with the occasional town which inevitably had a large church spire towering over the residents.

We arrived at the entrance to the Eurotunnel train early enough that we were told we could board an earlier train, saving us about an hour of wait time. We proceeded through immigration — due to Brexit, you have to stamp out of France and stamp into the UK before getting on the train — and were directed down to the queue. Glancing up at the board, it became clear that the earlier boarding had already taken place, and we were now lined up in our original time slot. Oh well…what else did we have to do?

The time came, we boarded the train along with about eight other motorcycles, and took our spots. It’s only a 30 minute crossing, and there’s no place to go, so we stood by the bike and chatted with a few other riders until we pulled into Folkestone on the UK side of the English Channel.

We rode another few miles to our Folkestone campsite, which was a nice grassy spot overlooking the channel. We set up next to another rider on a Suzuki V-strom who was from Cambridge and was headed to France the next day to visit family. After stowing our gear, we hopped back on the bike and rode into Folkestone to find a bite to eat. It’s not a big place, and it was maybe 8pm, so most places were closed. We eventually found a Fish & Chips shop which turned out to be quite good.

In the morning we again scrambled to pack during a break in the weather, and headed south towards Southampton. Riding through the small village of Bells Yew Green in Turnbridge Wells, I spotted The Brecknock Arms pub, and decided it was a good time to stop for lunch. While today was only 160 miles, the route was entirely on narrow hedge-lined roads through small villages, and took all day. 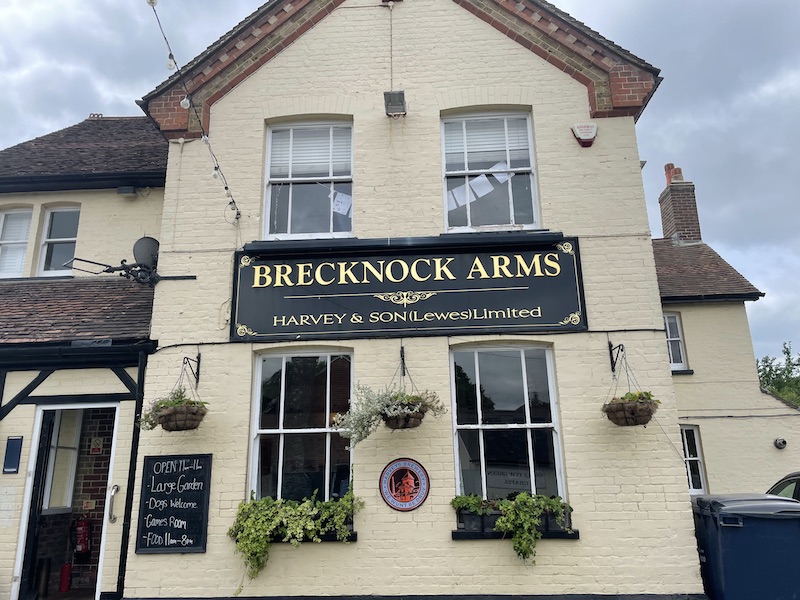 I took a photo of a couple of sayings scrawled on a blackboard inside the pub, but I’m going to keep it and add it to a “British Humour” blog post coming up in a day or two.

We stopped at the Tesco in Lymington for gas and supplies, and so I could use the restroom (gotta get used to saying “loo”). Finding the loo out of service, I told Diana to go ahead and do the shopping and I would ride to the next petrol station to find a working toilet and be right back.

Easier said than done. According to the GPS, the next petrol station, a Shell, was 3.5 miles away. When I arrived there, I found a chain link fence around an empty lot, the station having been completely torn down and under new construction. So I check for the next petrol station on the GPS, which turned out to be another nine miles away. Too far! I entered the coordinates for our campground, and found it was less than a mile. So I selected that route, and was steered down a dead end road to the local garbage dump. Enough already! A quick dip off the side of the road and into the trees…

Twenty minutes later, I returned to pick up Diana and the groceries, and again entered the coordinates for the campground. Since we were coming at it from a different direction this time, it took us a slightly different way, avoiding the dead-end garbage dump road. This time we navigated down a small road to a gated foot path, where Garmin announced “You Have Arrived!”.

I pulled my phone out of my pocket and entered the coordinates into Google Maps, which said I needed to go another two hundred yards to the entrance to the campground. Amazingly, as soon as I hit “Go” on my phone’s directions, the GPS switched to the same location and told me to ride another 200 yards down the road.

So helpful, Garmin. Glad you could get it right, with the help of a mobile phone.

We checked in and were told to pick any spot in any of the three large fields. In order to gain some shelter from the wind, we chose a spot along a large hedgerow, which is what the other campers were doing.

This is one of three huge grass fields that during the summer would be packed with motorhomes, travel trailers, and tents. But we’re here early, before the season really starts. So we picked a spot up against the hedge with the other four campers. That’s our tent in the middle.

We enjoyed dinner on a picnic table that happened to placed between two buildings just enough to block the wind. While cooking dinner, a car pulled up and a woman jumped out and rushed up to Diana and said “Reception?”.

Reception had closed an hour or so earlier.

A bit confused, Diana replied, “It’s up at the entrance.”

“I know that”, the woman said. “I need gas (propane) for our caravan.”

Diana just shrugged and said “Sorry”, as we had no idea where she could get a bottle of propane at 9pm in Lymington. The woman was obviously upset that Diana wouldn’t get up and go get her a propane bottle. She eventually huffed loudly and said, “Well!” and stormed back to her husband and their car.

We have no idea why the woman mistook an American tourist in a campground for an employee, but it was amusing nonetheless.

The next morning (Friday) we rode a short ten miles to the Sammy Miller Motorcycle Museum. Sammy Miller was a motorcycle racer, primarily in the 60s and 70s, who competed in both roadracing and trials events, and won a huge number of races and championships. Sammy is in his late 80s now, and still putters around the museum and workshop. He has a tremendous collection of motorcycles, many with historical significance, and several early British marques that even I had never heard of.

A small number of the regional, national and international championship trophies that Sammy Miller won over his career. There are three or four of these cases full of silver cups.

There are way too many interesting motorcycles here to show even a small percentage of them, so I’m just going to pick a couple. This one is a 1935 Scott Inline Three Cylinder, 1000cc Two Stroke. Not something you see every day. Or ever. 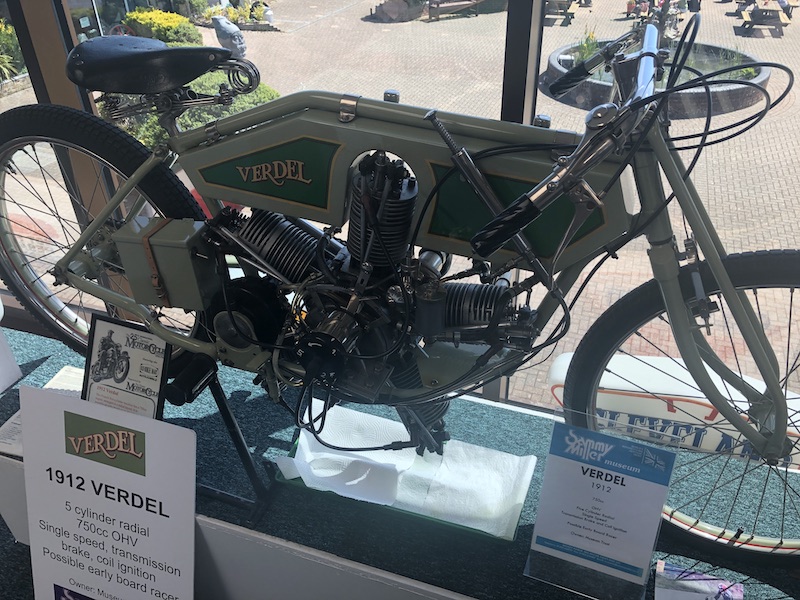 After an hour or so at the museum we headed towards Bristol and then just north, cutting in and out of Wales to claim our 10th country of the trip, to Lydney, a small village about half way between Bristol and Gloucester. Once again, we found that it didn’t seem to matter if we were going 50 miles or 350 miles in a day, the amount of time required to cover the distance was always about the same. In this case, it took us two hours to go sixteen miles through Bristol. (At least it wasn’t raining — finally!). Afterwards, we learned that a combination of it being a holiday (“mid-terms” — sort of the equivalent of our Spring Break) and a nearby Ed Sheeran concert caused a huge backup of traffic on the motorways, mostly because they don’t have overpasses on the motorways here; they use roundabouts — the larger ones with traffic lights — which at a certain level of traffic becomes sheer chaos and stopped.

Sheephouse Camping would be our base for the next several days. I had an appointment at the local Yamaha dealer Saturday morning for an oil change, something I normally do myself, but disposing of the waste oil is a bit more of a problem here than many other places. So Saturday we were up early and headed back into Bristol. Fowler’s Yamaha is also a dealer for just about every other brand of motorcycle, and is so large that the first two floors are full of bikes and accessories, and the third floor is KTM on one side and Harry’s Cafe on the other side. We had a great Full English breakfast at Harry’s while waiting on the bike, and by 10am we were looping all over Bristol in search of Banksy street art. 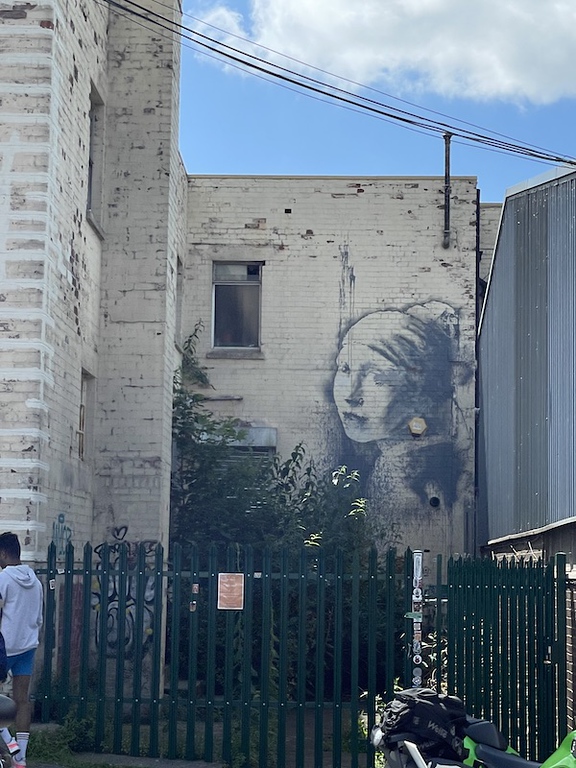 Banksy’s “Girl with a Pierced Eardrum”, a take on Vermeer’s “Girl with a Pearl Earring”. Note that the “earring” is an alarm siren on the building, hence the pierced eardrum. 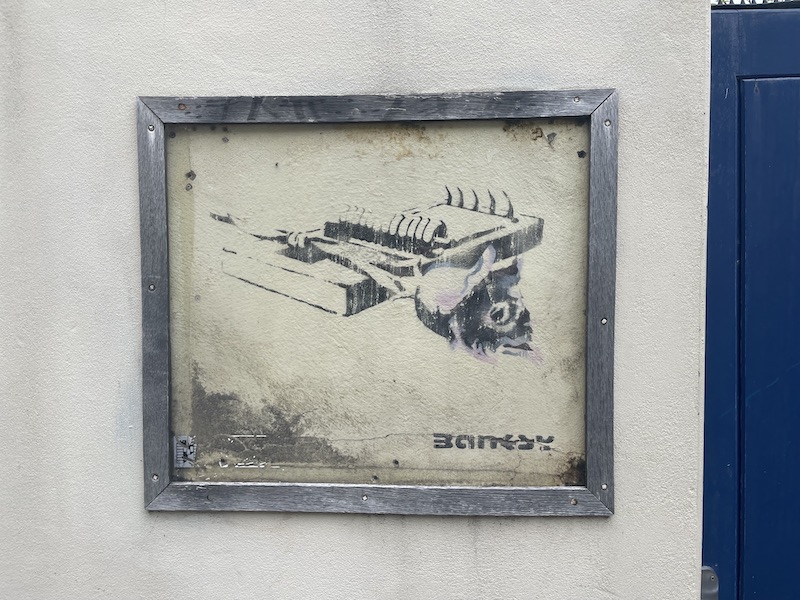 This small Banksy piece is on the front wall of a house. Called “Rose in a Mousetrap”, it has been framed to protect it from vandalism. 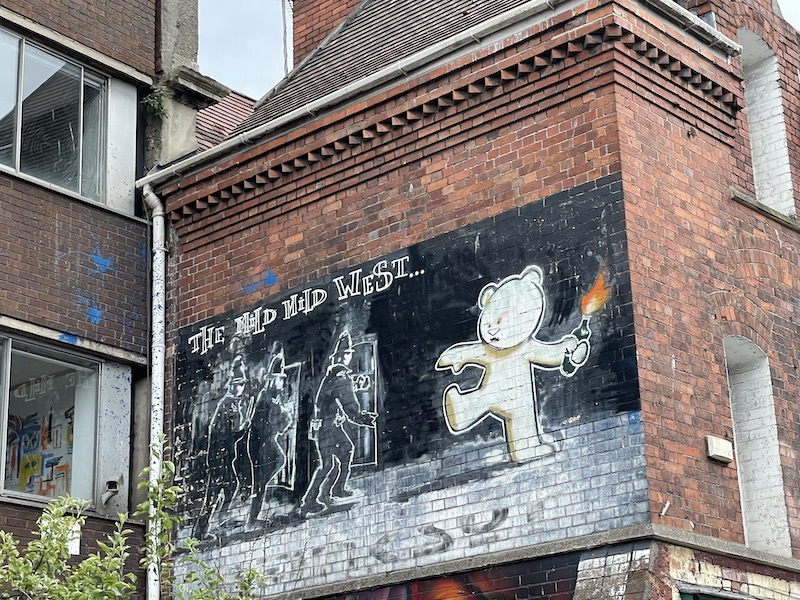 “The Mild Mild West” is an early Banksy piece poking fun at the police’s attack on local rave parties. 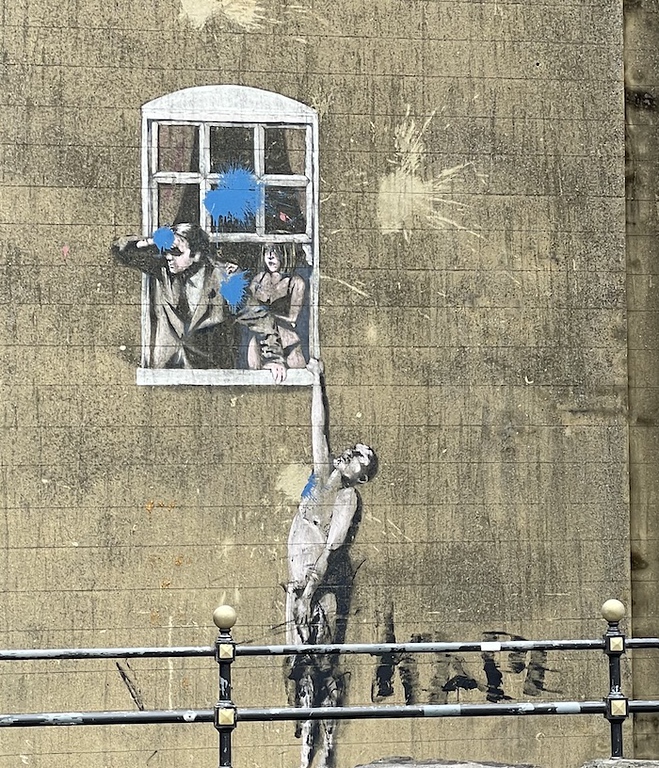 “Well Hung Lover” was vandalized a few years ago by some idiot with a paintball gun, but is still one of the more popular Banksy pieces in Bristol.

After scouring the city for several hours in search of Banksy art that either had been covered over or had been removed and preserved or removed and auctioned off, we headed back to the campground for another evening.