I had read a lot of others’ blogs about going the “back way” to Machu Picchu. This required a bit of logistical work, but was considerably cheaper than the typical tourist method of taking the train from Cusco. It would involve a bus, a collectivo, a taxi, a hike, and another bus before arriving at the gates to Machu Picchu. Not exactly the way Hiram Bingham arrived ca. 1911, but I only had a day or two.

Some people ride their bike to Santa Teresa, and leave it there and hike the rest of the way to Aguas Calientes — also known as Machu Picchu Pueblo, which is the town at the base of Machu Picchu. Not for me this time. For 15 Soles (five dollars), you can take a bus to Santa Maria, where you then take a collectivo to Santa Teresa, then a taxi the last 20 minutes to the hydroelectric plant, where you can hike along the railroad tracks (for free) for a little over six miles. It’s possible to do all of this in a day, see Machu Picchu the next morning and return to Cusco. A bit hectic, but possible.

The bus ride from Cusco to Santa Maria was not like the luxury bus I took from Huanuco to Lima last month. I was seated in the last row of the bus, and the woman next to me (besides not bathing in a month or two) apparently was able to buy one seat for her, her ten year old son, and her 2 year old son. Which meant the ten year old sat mostly in my seat, and the two year old sprawled across her lap and mine. For six hours. Hey, I wanted to experience the local culture. I was getting what I asked for.

Next up after the bus: collectivo to Santa Maria. That’s enough for one day. How about spending the night here and going on in the morning? 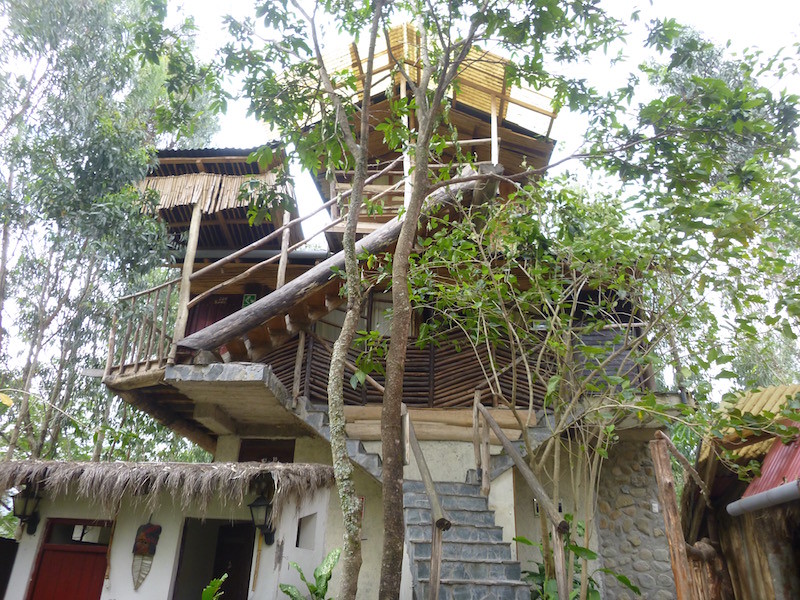 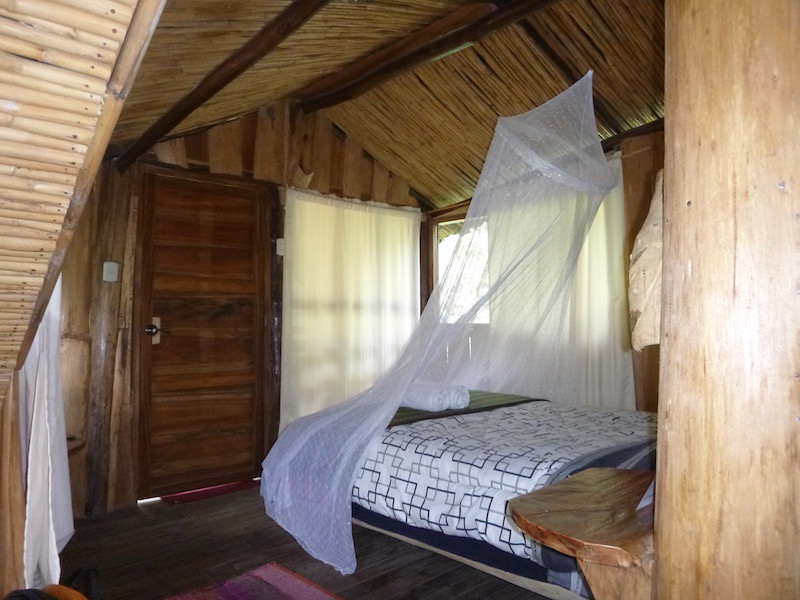 No actual windows, so mosquito netting is a must.

The morning taxi ride to the Hidroelectrica plant is about 20 minutes, and then the hike to Aguas Calientes begins. This is well worth it. Along the railroad tracks, mostly level. Despite the elevation, it’s an easy hike. 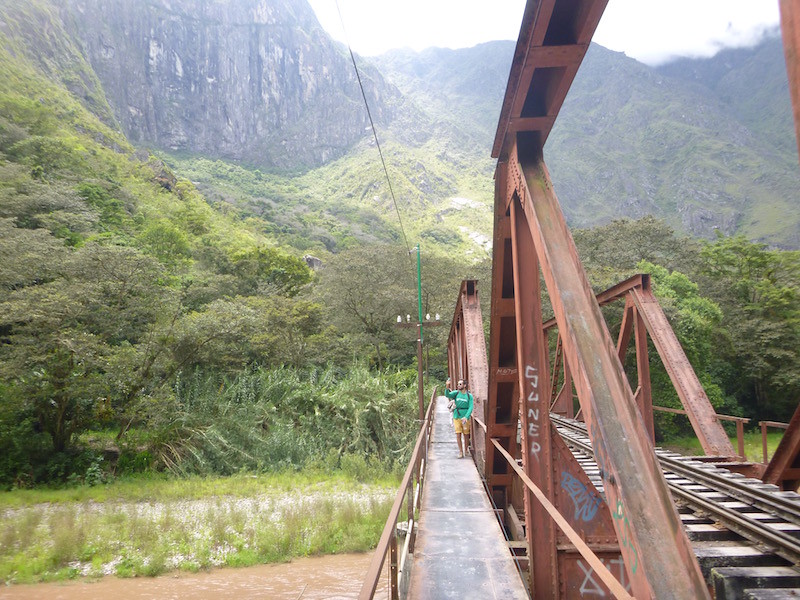 I didn’t know it at the time, and it’s hard to see in this photo from the bridge, but between those two peaks on the mountain is a terraced area. I could see that much. What I didn’t realize is I was looking at Machu Picchu from below.

Machu Picchu is pretty spectacular, but as I’ve said many times before, I’m not fond of tourists, so this place and the town below it feels a bit like a South American Disneyland. Hordes of tourists (mostly North American and European) whining because they aren’t in their homeland’s “give me everything” culture, demanding that they be catered to, thrusting “selfie sticks” with abandon in every direction like light sabers in Star Wars.

I have to admit that while Machu Picchu is pretty impressive, I found the surrounding scenery to be the true stand-out.

I really expected more people on this hike. I was pleasantly surprised.

Machu Picchu as seen from the Sun Gate. It’s a 45 minute hike up to here from the park entrance. I was not so pleasantly surprised to find about 60 to 80 people there, all taking group selfies. These people had all hiked four days on the Inca Trail to get there, so I guess they deserved it. The switchback road is the bus route up to Machu Picchu. 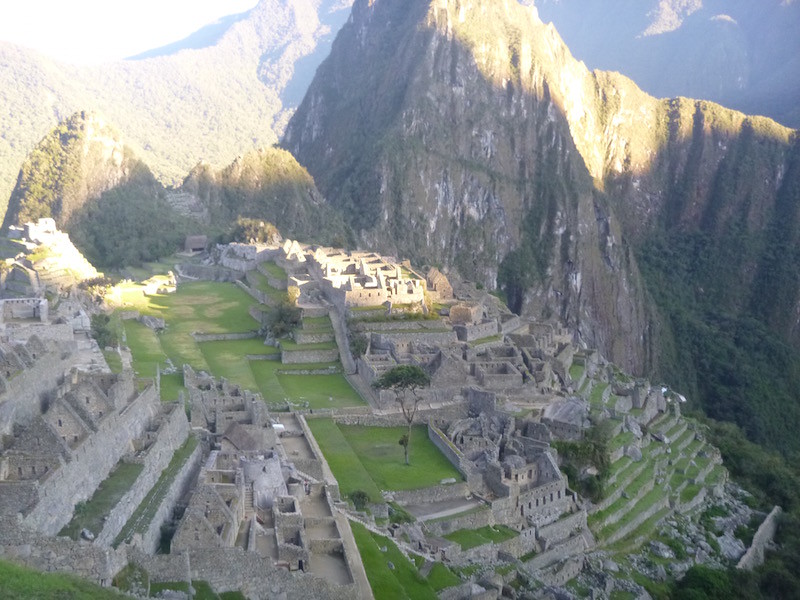 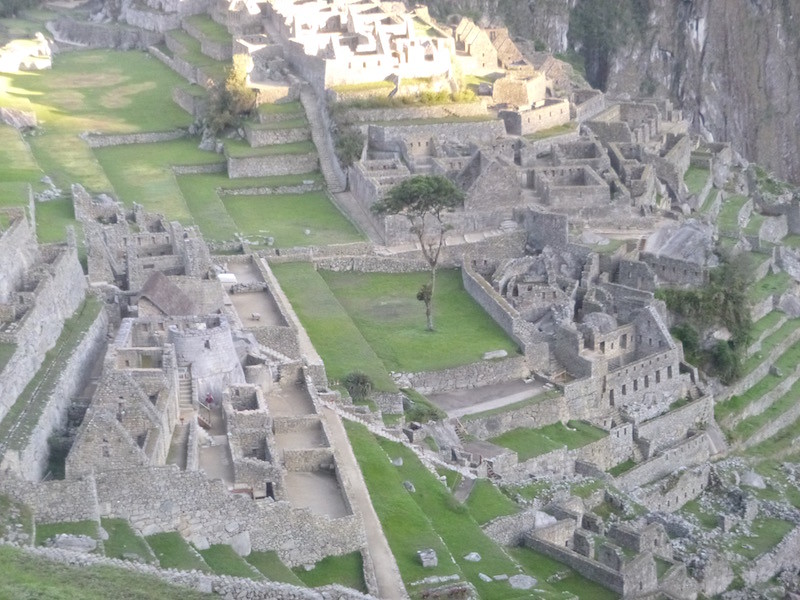 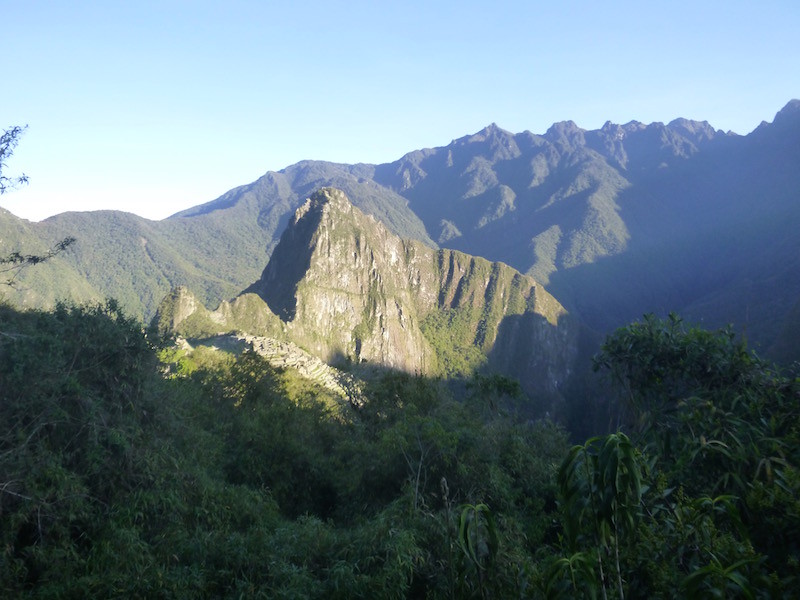 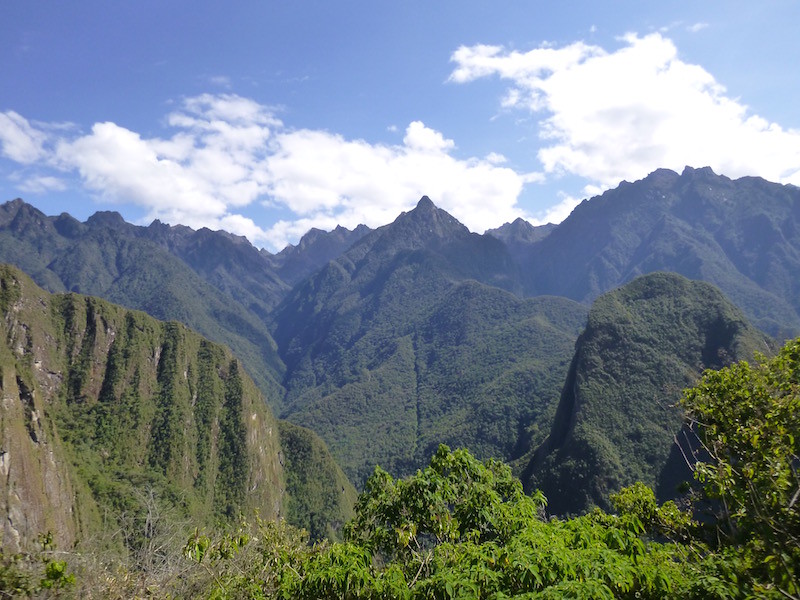 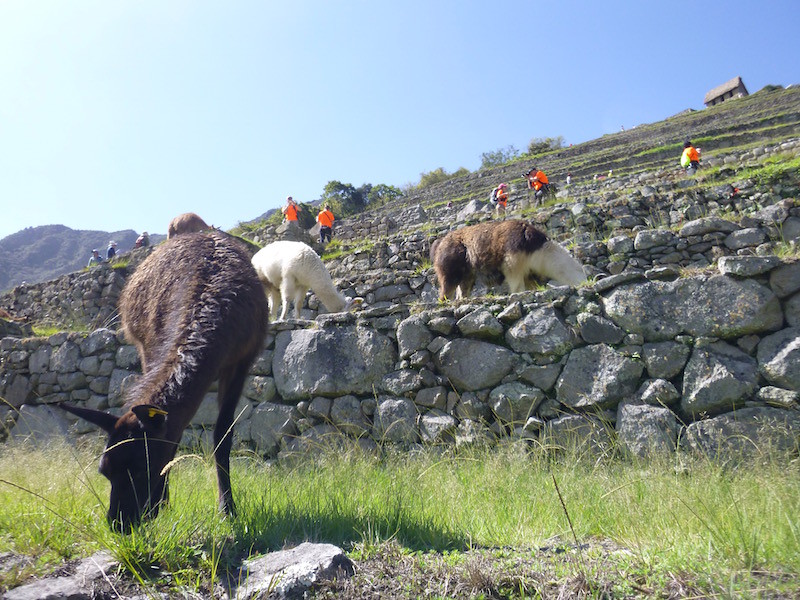 This one even smiled for me.

A few hours here is enough for me. Besides, I was secretly focused on a different, much less-known attraction nearby. Behind Aguas Calientes and across the valley from Machu Picchu is a mountain known as Putucusi. There is an unmarked trail that leads to the top of this mountain, where you can look across to Machu Picchu. The catch: there are seven “ladders” going nearly vertically up the granite face of the mountain, some over 100 feet long. It is not an easy trail, especially if you are afraid of heights. Between and above the ladders are stone steps, steep dirt path, and eventually, at the top, a narrow ridge about three feet wide that you have to cross to get to the “summit”. I had been excited to do this since I got to Peru.

I found the unmarked entrance to the trail and began the climb up. The first twenty minutes or so is up stone steps, very steep and overgrown. At one point, the steps were gone and it was necessary to “shimmy” across a couple of large poles, then climb to the continuation of the steps.

“Hidden” trail into the jungle. 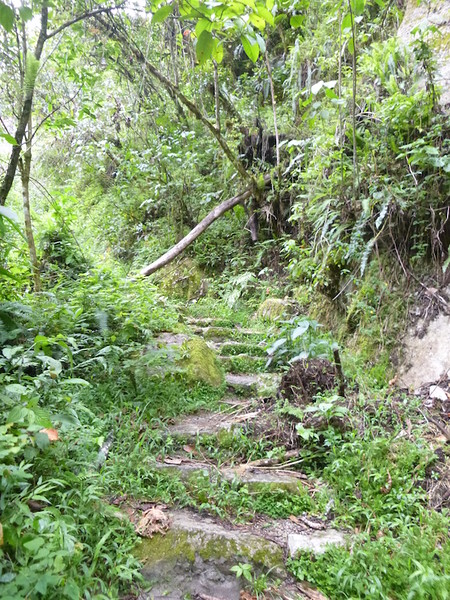 Had to cross these poles to climb to the next section. 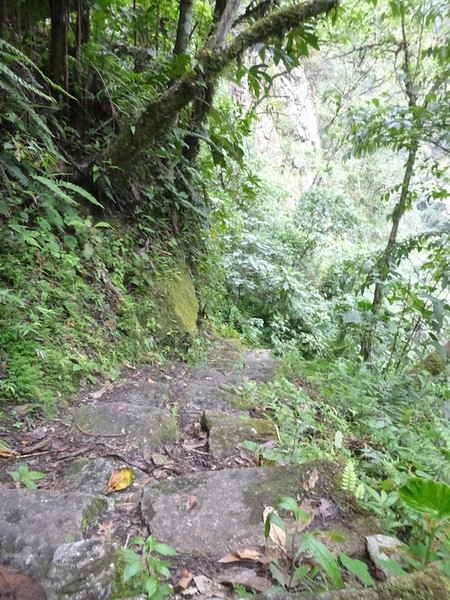 Looking back down at the steps.

Eventually I arrived at the first, and longest ladder. I was shocked. The first sixty feet or so was missing. You could see where the rungs had been in the rock, but someone had torn them out. The large steel cable alongside the ladder was still there, and for a moment I considered using it to climb the rock to the remaining ladder rungs, but I decided that without a climbing partner and/or climbing gear, it was too dangerous.

Hard to tell how steep this is, but it’s probably about 60 degrees or so. You can see the holes where the rungs of the ladder used to be, and further up you can see the actual remaining ladder. 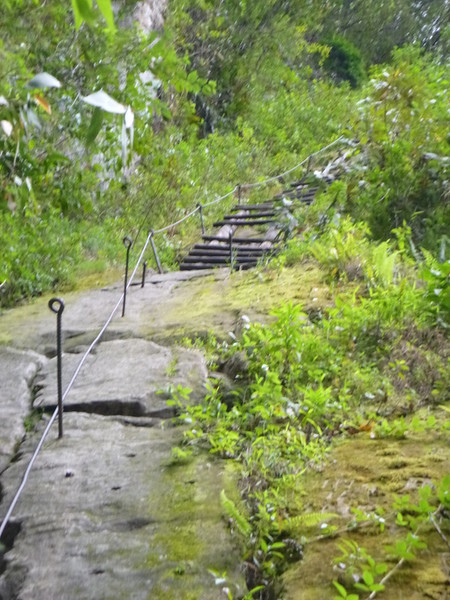 Close up of remaining ladder rungs further up the rock.

Disappointed, I turned around and headed back down.

After my experience with my fellow bus passengers on the ride up, I decided to speed things up and take the train back. Out of my budget, but comfortable and quick. 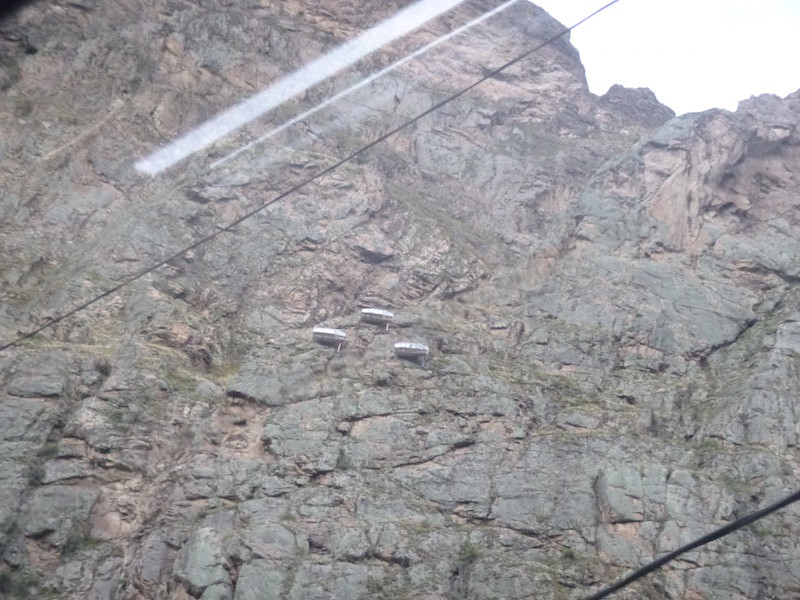 This photo is hard to figure out without explanation. See those three “pod” looking things on the side of this giant cliff? Those are “Skypod” hotel rooms. Yup. You have to climb up to them. They are complete with a nice bed, couch, bathroom (no shower or bathtub), and believe it or not, they serve dinner and breakfast to you. This is definitely on my to-do list next time in Peru. I took this photo from the skylight of the train as we passed by. Then I happened to meet a British couple at my campground in Cusco that just spent last night there.

It’s been nice to camp in my tent again, even though it was raining in Cusco. The campground was small, and there were about four other overlanders there when I arrived, all in one form of motorhome or another. 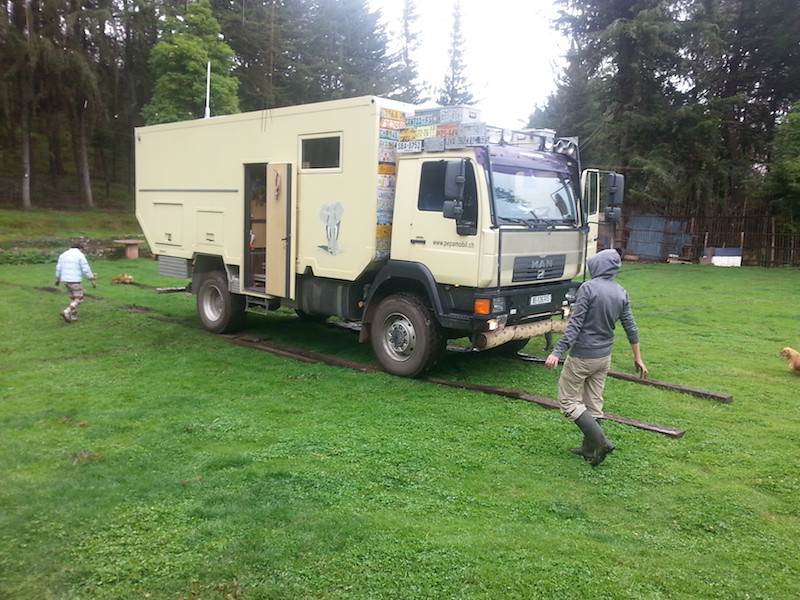 Fifteen years on the road so far…and still getting this behemoth stuck in wet campgrounds…www.pepamobil.ch

I was lucky enough to pitch my tent under a protected spot, and let the barking of a thousand dogs in Cusco lull me to sleep. 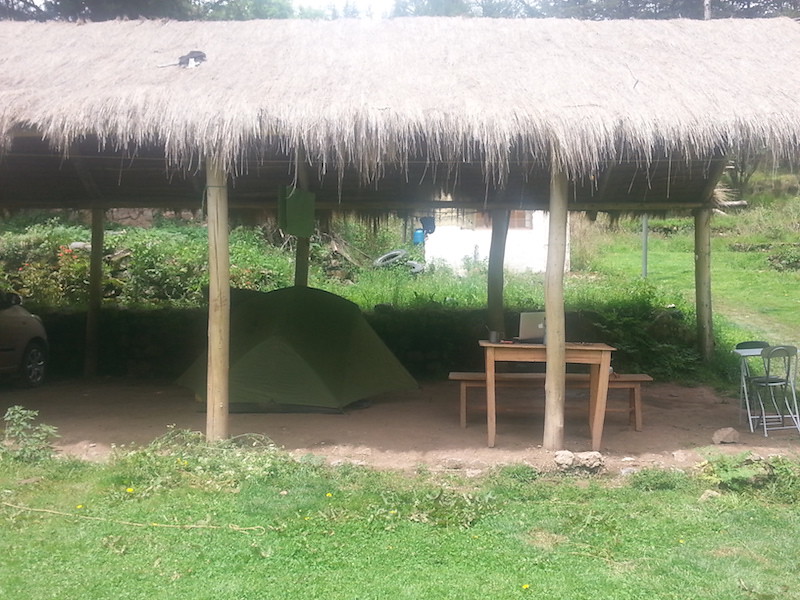 Nice campsite, with wifi, a bench and table, electricity, and protection from the rain.

And these guys for neighbors. They didn’t really care about the camera. They expected me to feed them. They followed me around like puppies. 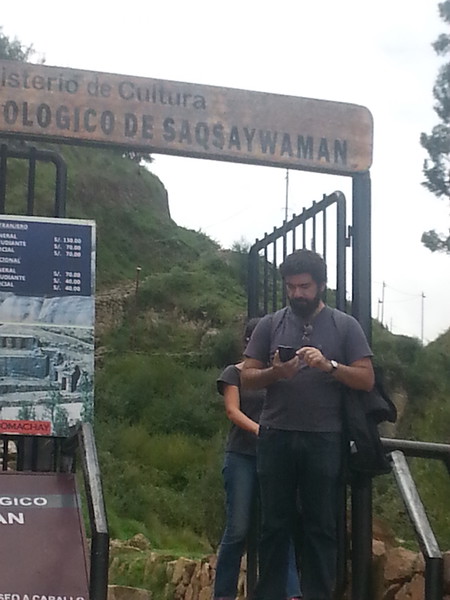 The campground is on top of a mountain overlooking Cusco. Just below is an archaeological park. Gotta love Quechua words. The park is called Saqsaywaman. And yes, it is pronounced “Sexy Woman”.

And an Inca Kola. Despite how it looks, and the fact that it tastes like 99% sugar, it really isn’t bad once you get used to it. I even found these for sale in Peruvian restaurants in the States over Christmas. Very popular.

5 thoughts on “Cusco, and the “Back Way” to Machu Picchu”