A few days before we left Fairbanks, we received news that our tour in Denali National Park would be shortened by half, due to an increase in landslide activity. And then, yesterday, even more unpredictably, our tour would get even shorter.

Denali National Park is over six million acres. It was created in 1917 to protect the Dall Sheep from over-hunting. There is essentially one dead-end road through the park, which runs 94 miles from the park entrance west to Kantishna. With very few exceptions, personal vehicles are not allowed to travel this road beyond the first 15 miles or so (and then only with a permit). Tour buses and transit buses take visitors the entire distance; the transit buses haul campers and hikers to various drop-off points, while the tour buses include a naturalist who narrates along the route.

Well, normally the buses run the entire route, and that’s what we intended to do when we booked the tour several weeks ago. However, three days before we arrived, the road was shut down at Mile 42 due to increased landslide activity. There has been landslide activity at this point in the road since the 1960s, but the rate of the movement has increased dramatically in the last year. The slide runs under the roadbed, and it used to cause cracks in the road surface that needed repair every two to three years. In 2018 the road began to slump a half an inch per day. This year, the landslide began moving downhill at ten inches per day, and the road slumped three and a half inches per day. The park had to close the road because they haven’t been able to find a solution to keep up with the slide.

With this in mind, we left Fairbanks — in nice, dry weather finally — and arrived at our cabin on Carlo Creek, about fifteen miles south of the park entrance, with the understanding that we would basically be doing the first half of the bus tour, out and back. That was Thursday. Friday was a day off for us, and we used it to do some basic maintenance items.

We decided to retire early Friday evening, as we had to ride back up to the park entrance early on Saturday morning in order to make our 7:30am tour. About 8pm, I looked out the window at the bike. It was snowing. In August. And it continued to snow for several hours.

Looking beyond our cabin early this morning.

Fortunately, it let up in the middle of the night, and the temperature stayed just above freezing. When we left for Denali this morning, the view was totally different than when we rode in on Thursday.

This morning’s view. Much more white than yesterday.

We arrived at the bus depot at the park and stowed our gear (we wore most of our gear on the bus, just to stay warm). After the bus departed, our driver/naturalist, Brian, advised us that the road was icy and in bad shape beyond Mile 30, and we might not be able to go beyond that. We were the fourth bus on the road this morning. The scenery was definitely spectacular, especially due to all the snow, and not at all what we had expected.

On the Denali Park Road.

Mt. Denali is still 40 miles away (that shiny sliver in the center of the photo is the sun hitting Denali; that’s as much of it as we were able to see today). We can’t get close enough to it due to the road closures, and we probably couldn’t see much of it anyway due to the weather. Many people we’ve talked with said it took several trips up and down the highway here before they hit it on a good enough weather day to actually see the peak.

Arctic Ground Squirrel, aka “Cheese Pizza”. Alaska’s version of a prairie dog. They’re referred to as Cheese Pizzas (mostly by humorous researchers and Denali tour bus naturalists) because a research project years ago determined that Grizzly bears were digging these guys up out of their burrows and eating them. The researchers found that the ground squirrel provided the bear with about 2,000 calories, or the equivalent of a medium cheese pizza. Additional fun fact: these ground squirrels actually lower their body temperatures from 98 degrees F to below freezing when hibernating, the lowest of any mammal.

View across the Teklanika River at Mile 30. This river might not look like much today, but this is the river that Christopher McCandless crossed and then couldn’t get back across, eventually dying in the old Fairbanks bus. The book and movie Into the Wild was based on this story. The actual bus was located off of the Stampede Trail in Denali, but was airlifted out last year because it had become too much of a hazard. For some reason, people kept hiking to the bus and then getting trapped by the rising river and had to be rescued. Who would have guessed?

This is the replica bus that was built for the movie. It now sits at 49th State Brewing in Healy, just north of Denali National Park and about 28 miles east of where McCandless died in the actual bus.(Additional tourist tip: this place has awesome burgers!)

Inside the movie bus.

Just as predicted, at the Mile 30 stop, the dispatcher came on the radio and advised that all buses would be turned around at Mile 30. So our 94 mile tour had dropped to 30 miles. We were disappointed, but still happy to have seen the amazing wilderness.

On our way back to the cabin, we stopped for lunch at Creekside Cafe and Bakery, and had a good laugh. A gentleman was buying cinnamon rolls, and the server asked him what size he wanted, “Alaska” or “Texas”. I almost spit my coffee out. That’s how Alaskans refer to “Large” and “Small”. It wasn’t the first time in the past couple of weeks that we’d been told “Oh, you’re from the second biggest state.” But it was the funniest version. 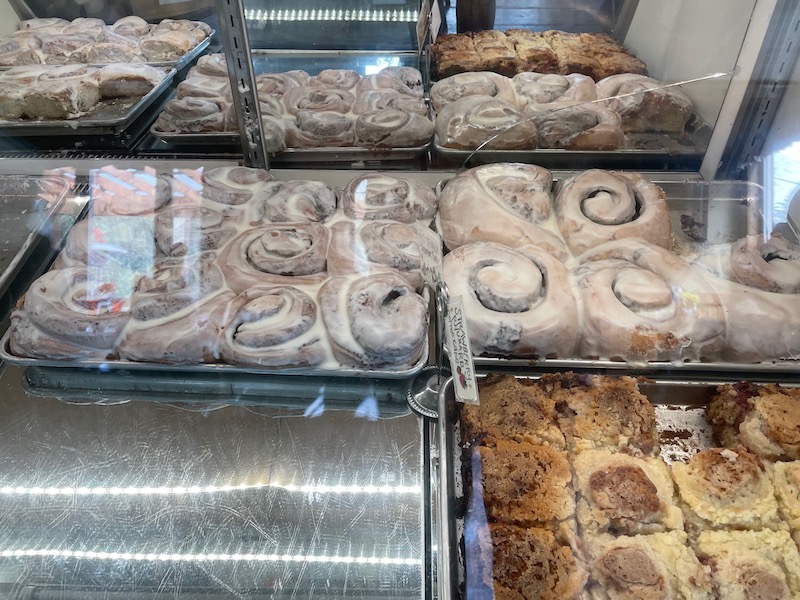 Alaska-sized cinnamon rolls on the right.

And then there’s this:

The other state bird of Alaska. Back home, we’re used to seeing Deer Xing signs. Up here, the mosquitoes are so big, they have Mosquito Xing signs. Fortunately, we seem to have missed that season by a month or so.

We are headed south again tomorrow morning, closer to what people here keep telling us is “the Alaska you always see in the brochures”.

4 thoughts on “One Third Denali”