I have traveled through over 40 countries, mostly by motorcycle, and seen some amazing places. La Sagrada Familia in Barcelona, Machu Picchu in Peru, the Santuaria de Las Lajas in Colombia, the Carretera Austral in Chile, and more.

There are a lot of places in our own backyard that we have yet to explore, but we’re working on it. The past two days have definitely added another to my Top 10 — and probably Top 5 — places to see worldwide.

We were once again aiming to get a “first come” campsite in Bryce Canyon National Park, and we were somewhat surprised that we were able to secure a nice spot in the North Campground. With the campground at 8,000 feet elevation, the temperatures dropped from mid-80s in Kanab to mid-70s in Bryce, and in the mid-40s at night. After setting up camp, we rode the 18 mile long scenic drive and stopped at the overlooks on the way back. The views here are stunning, and for the most part self-explanatory, so I’ll just let the photos speak for themselves unless I feel I have to comment. 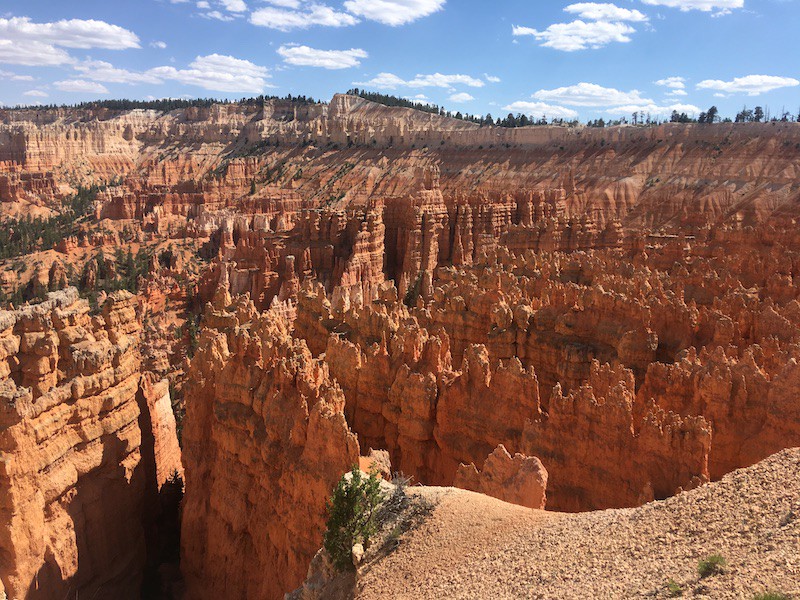 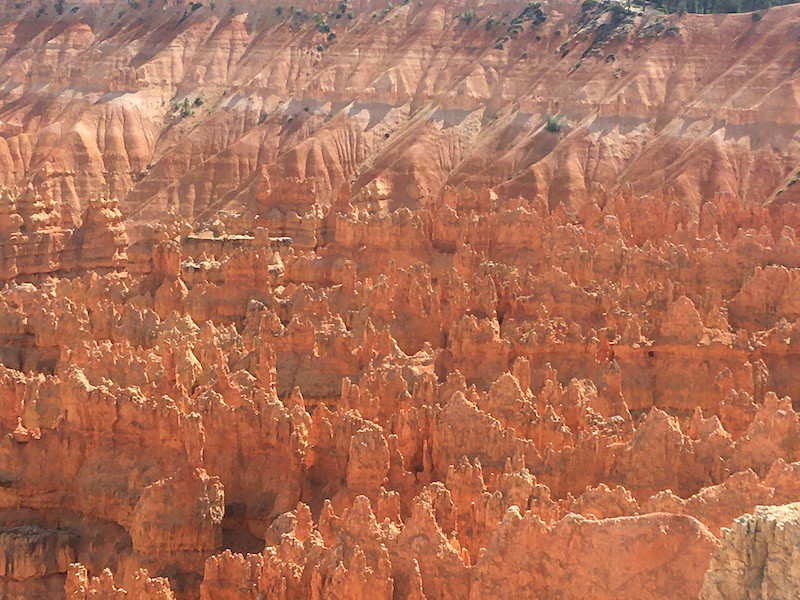 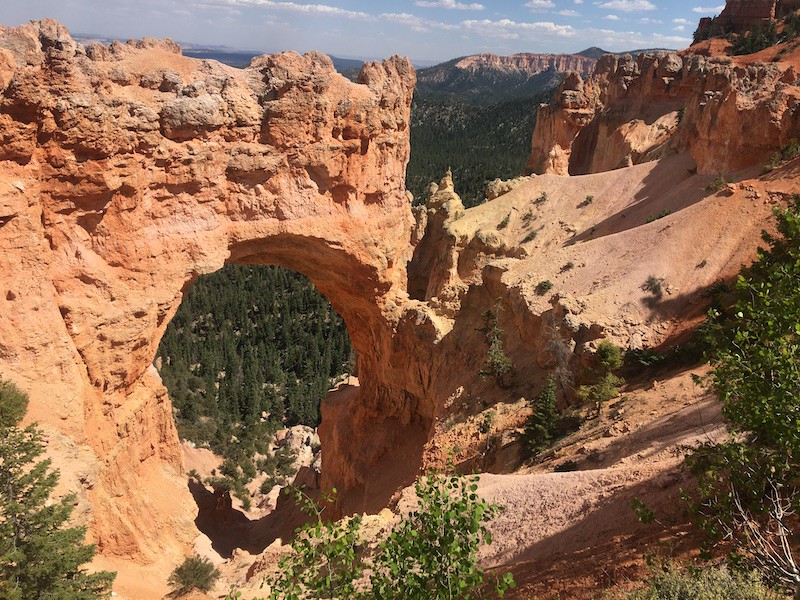 After relaxing at camp for a few hours, we hiked about a mile to Sunrise Point to watch the sunset. Yes, there is a Sunset Point also, but who are they to tell us where to stand at what time of the day? 🙂

There are 65 miles of hiking trails in the Park. The next morning, we chose a short six mile hike from the Rim Trail down Queen’s Garden into the canyon and back up the Navajo Loop trail through Wall Street to the Rim. 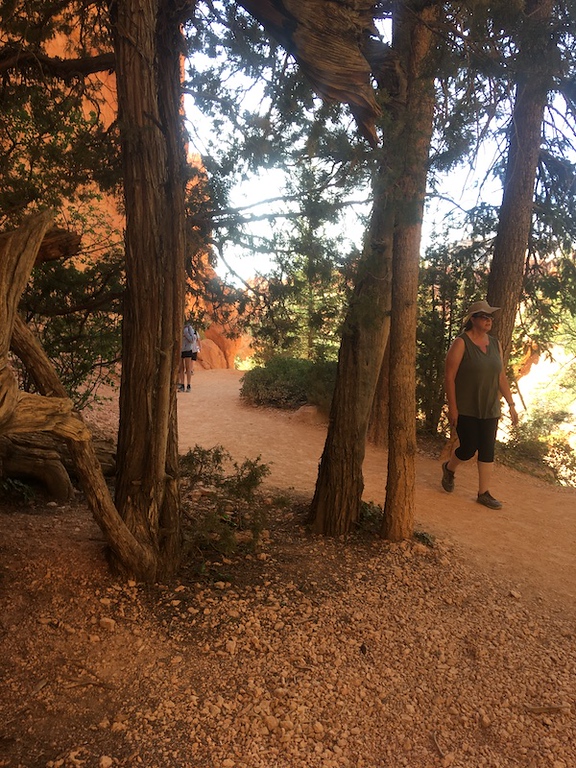 The height of these two trees in between the narrow canyon walls was impressive, but look closely at the tree on the left: it has another toothpick of a tree growing out of it (different bark) that is nearly as tall. Incredible! 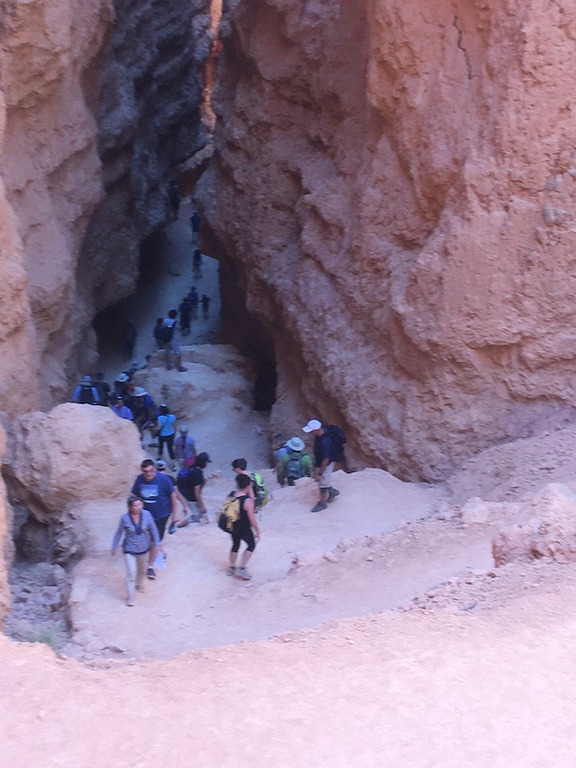 Wall Street on the Navajo Loop is near Sunset Point, so it gets a bigger crowd. But it is a cool short trek from the top. We did it at the end of our hike, so we climbed up Wall Street to the Rim Trail.Some of these spots had an almost Disney-like crowd feel to them. The people-watching is priceless. We quickly saw that those with the designer hiking clothes struggled the most with the elevation and climbs.

After our hike, we stopped by the General Store for a beer on the porch. That’s where we overheard this short conversation between a woman and a store employee:

I almost spit my beer out. The difference between what time he chose to arrive to work versus the definitive “we are outta here at 6pm” was priceless.

After two days at Bryce, we moved to our “base camp” for the next several days.

Hidden Valley Cabins near Alton is a quiet, out-of-the-way spot that is fairly central to Zion, Bryce, etc. The cabins were built in the 1920s in Bryce Canyon National Park as ranger cabins. They were moved here in the 1980s, and had bathrooms installed. Josh and Jacey have recently taken them over and remodeled them.

Our cabin didn’t come with a cat, but one showed up shortly after we did and quickly made it clear that we were guests in his home. We don’t mind; it’s a little bit of home that we miss.

As impressed as I was with Bryce, I keep hearing the scenery at Zion will blow me away. We will soon find out. Our next door neighbor in the Bryce campground (on a BMW 850GS) returned last night from riding through Zion and couldn’t say enough good things. He didn’t do any of the hikes, but we hope to.