We’re taking it a bit slower for a few days, for several reasons:

The scenery is too good to pass by quickly.
The weather is a bit iffy: cold and wet, but dry and cool at times.
We have several long days ahead of us and Diana doesn’t “do cold” well, so I’m trying to give her some time off the bike to rest before pushing it.

Heading to Flåm, we again passed through many tunnels, including a couple with colored lighting, and one with a roundabout in the middle of it. You can see these in the video in the next post. I’ve seen intersections in tunnels before, such as in Guanajuato, Mexico, but the colored lights added a whole new dimension. Disco tunnels!

Our campsite for the next few days was “in town”, as “town” is only a couple of blocks long. But we shared the town with a train, several cruise ships, and a ton of tourists.

The town of Flåm is small (population 350), as is the end of the fjord where the cruise ships dock. This makes it look like the cruise ship is parked in a tiny creek. Each night one cruise ship would leave, and in the morning another would arrive, thus increasing the population of tiny Flåm by nearly ten-fold.

The first day in Flåm we took a train ride up to Myrdal and back. Nice scenery and a huge waterfall in the middle of the ride, where they stopped and you could get out and stand on a platform at the base of the falls. The side of the train says “One of the most beautiful train journeys in the world.” Typical Norwegian honesty; In the US, as elsewhere, they would say it was THE most beautiful, regardless.

View from the train.

When we arrived at the campground, Diana met Terhi from Finland. Terhi and her husband Harri and 9-year-old daughter are touring Norway on two motorcycles. They gave us some great tips about where to go and what to see in Finland, and invited us to stay at their summer cabin when we get there. Two days later, at a gas stop, we met two more guys from Finland, Jonni and Tony, and Tony also offered his summer cabin to us. As Diana said, people often say “If you’re in the area, stop by”, but the Finns don’t just say it, they insist on it!

The next day we rode back to Gudvangen, and boarded the ferry to Kaupanger. This is a slightly cheaper way to tour the Sognefjord. This photo shows the downside of all this beauty: the hordes of tourists from cruise ships, packed onto tour buses, swarm into the Gudvangen (population 100) ferry terminal to board the tour boat. It looks like the entrance to Disneyland at opening time. They blocked the cars, trucks (and motorcycles) from boarding the ferry, while they took selfies. The ferry was more my speed.

View from the ferry of Bakka.

Bakka lies literally at the end of the road, and there is this beautiful campsite (just out of the photo) beside the church. If/when I get back here, I will definitely be camping there.

We got off the ferry in Kaupanger, and rode a short distance before taking another ferry across the Sognefjord to Lærdalsøyri. From here to Aurland is a 24.5 km (15.2 mile) long tunnel. But we were going to have to pass through this tunnel again the next day on our way farther north. So…

Before there was a tunnel, there was a road over the mountain. Definitely a more adventurous route. As we climbed to the top, the temperatures dropped again, down to around 3°C, or 37°F. With the wind it was downright chilly.

The view at the top of the pass.

Coming back down on the Aurland side, we broke out near the edge of the steep mountain, and began the switchback descent.

Stunning views of the fjord as we descended to Aurland. 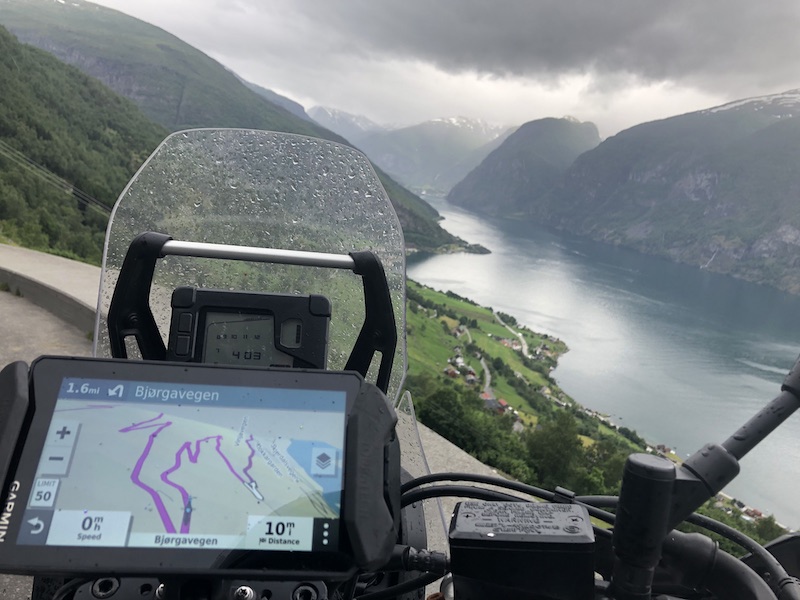 Note that the GPS says the speed limit here is 50mph, or 80kph. Which may well be true because it is a rural road, but good luck approaching these switchbacks at that speed. See ya at the bottom!

After a couple of full days of sightseeing, we left Flam and continued north to Geiranger, and the scenery just kept getting more jaw-dropping.

Remember that comment about fries, fries, and more fries? I wish I had taken a photo of the package before we threw it away, but this skillet is full of a bag of “Mexican Tacos”. Yep, just add tortillas, to your tiny pieces of unidentifiable cubed meat, corn kernels, and french fries. Nothing says Mexican Food like french fries in a tortilla.