We left the Big Sur campground and went north again to Monterey, then inland and back into the heat. By the time we stopped for lunch in Los Banos it was 100F. At a convenience store there, I saw something I had never seen before: the handles for the front doors were wrapped in towels and taped. Apparently since the doors face directly into the sun, they get so hot that people burn themselves just opening the door.

After lunch we continued north on the 5 Freeway to Stockton, where we headed east to my sister and brother-in-law’s home. A week earlier we had been only 150 miles from here, but we had done a 750 mile loop instead to get to this point.

We spent the next two days relaxing at their beautiful home and enjoying some great meals and conversation. I also mounted a new set of tires that we had shipped to their house. It turns out the original tires probably would have taken us all the way to Boise, but we weren’t sure at the time, and the front was beginning to show some considerable wear. The new tires were extremely stiff and a bear to mount with hand tools, but I eventually got them on.

Diana said their home felt like a really comfortable Bed and Breakfast. I reminded her not to say that to them, as I was pretty sure we couldn’t afford the room rate!

I only see my sister about once every ten years or so, and we didn’t really want to leave so soon, but we had another reservation already booked further up the coast.

We had a great visit with my sister Debbie and brother-in-law Dick. We don’t get to see them very often, so it was great to catch up.

I checked the air pressures in the new tires one last time before heading out that morning. Still, about ten miles down the road, the rear tire suddenly went flat. It appears that I had somehow pinched the tube in a folded position near the valve stem when installing it, and while it held air overnight in the garage, once it heated up, it let go. The tire was hot and much easier to dismount and reinstall on the side of the road this time. Within an hour we were back on the road and headed to Napa.

Passing through Fairfield, I saw one of those “Adopt A Highway” signs that announce people and companies who clean the litter from the sides of the road. This one had the famous “Jelly Belly” logo on it. Over the intercom, I said to Diana, “I think this is where Jelly Belly is located.” About thirty seconds later we saw the large corporate sign on the opposite side of the road with “Factory Tours” on it. A sudden detour was in order. 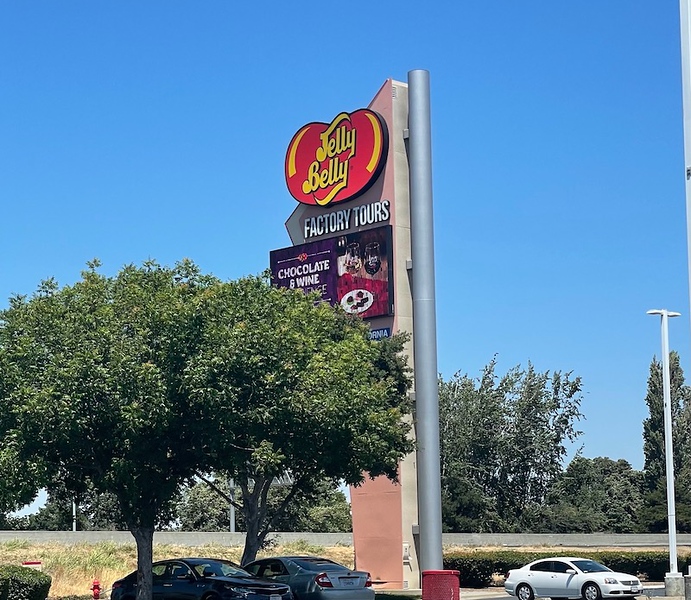 Can’t pass up this opportunity. We were only a short distance from our day’s destination, so why not take a break from the heat and have some jelly beans? 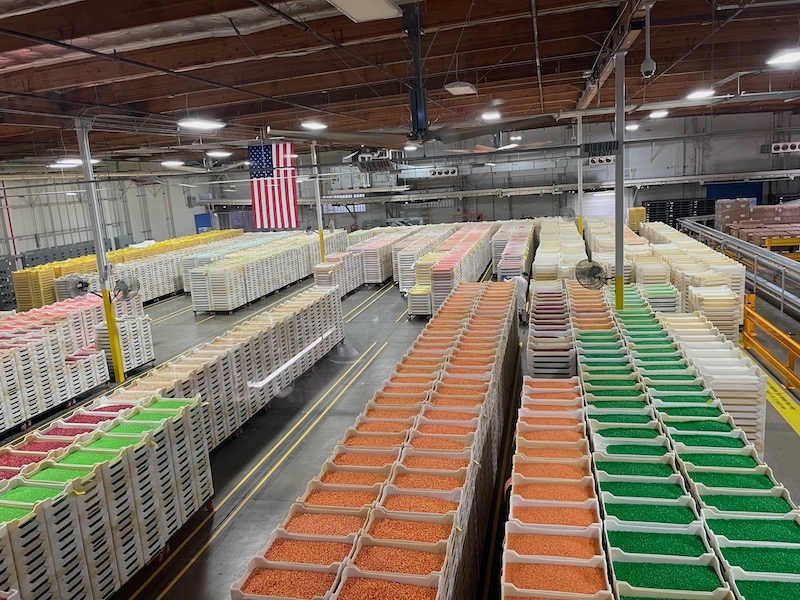 I’ve forgotten exactly what the sign said now, but it was something like “this room when full of trays holds over 200 million jelly beans.” Those stacks of trays are around six feet tall each. They “rest” here until being printed with the logo and packaged.

A short ride later and we were at our campsite at a city park in Napa. We had passed by a lot of vineyards in Napa, and the Sonoma Valley the next morning as well. But since we were on the bike, we didn’t stop to do any tastings. I’m sure we’ll return in the future, and perhaps do the Wine Train.