The last time I was in Praha, or Prague — in 2016 — I didn’t see anything but a campground. The campground was close to the city center, but it was jammed full of, well, various types of people, and I was nervous about leaving my things for several hours while I ventured out.

So this time we booked an AirBnB; a very small studio apartment about five miles from the city center but within five minutes walking distance of a Metro station into the old town. This gave us a good parking spot for the bike and reasonably priced lodging at about $40 a night.

On the way to Prague from Poland, we took a detour to Nepomuky, Horní Čermná, Czechia. Just before leaving Poland, Diana remembered that her father’s family had emigrated from this part of the world in the 1800s. A family member had compiled the family history into a book, so after a couple of emails with Diana’s mom, we had an idea of where to look.

We arrived in Dolní Čermná with a plan to search the local cemeteries. It turns out there was only one, at the local church, and the graves were all in the 1900s and no familiar family names, so we decided to head a few kilometers down the road to Horní Čermná. As luck would have it, a woman pulled into the parking lot as we were about to leave the church, so I asked her if she spoke English.

“Nein. Deutsch.”
Understandable. This part of Czechia used to be part of Germany, and there was still a lot of German influences here.
I pulled out my phone and started typing into Google Translate. Before I could finish, she ran back to her car, retrieved her phone, and called a friend who spoke English. The friend told us that we should go to the cemetery in Horní Čermná, and we would find family there.

Sure enough, the cemetery is probably 25% occupied by people who are likely related to Diana. We took a lot of photos, and agreed that we would come back and find living family members, as someone here is bound to have a family book. 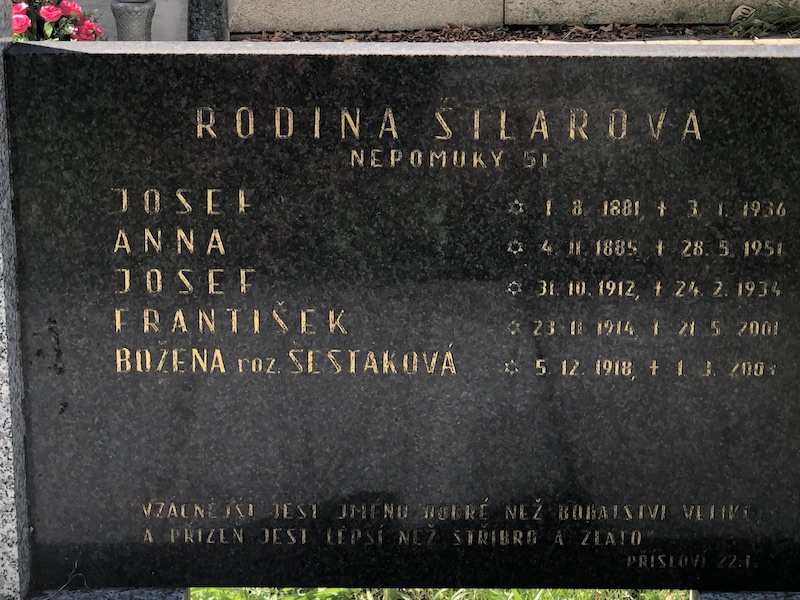 Diana’s maiden name is Schiller, which was originally spelled Šilar in the Old Country. “Rodina Šilarova” means Silar Family. This cemetery has dozens of Šilars, and it’s most likely that most if not all are relatives.

We headed to our apartment in Prague and a couple of days of down time.

We took the train into town on Saturday. We could tell as we stood on the platform waiting for the train to arrive that there was some sort of “event” happening in town, as there were people holding hand-made signs. When we arrived at the Muzeum station and emerged back onto street level, it was more than obvious that we had arrived at a very busy time: there was a huge Gay Pride Festival happening, and today was the big parade. 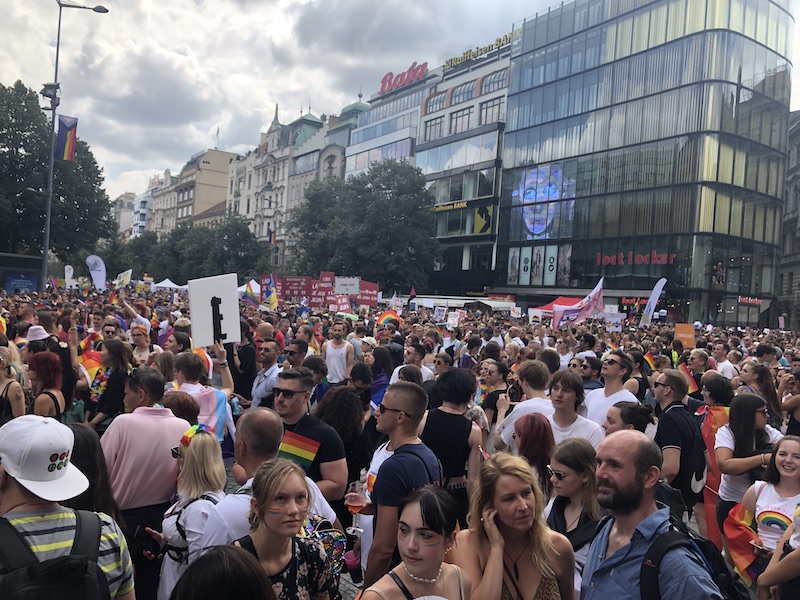 This is what we hit when we got out of the train station. For a hermit like me, this is terrifying, but at the same time incredibly interesting. There were over 60,000 people in attendance at the Gay Pride Festival, and we got there just before the big parade of the week was about to begin. Mix in the regular tourist crowd and the place was just a giant roadblock of people-watching.

What normally would have been a five minute walk turned into fifteen minutes, but we eventually arrived at the town square. 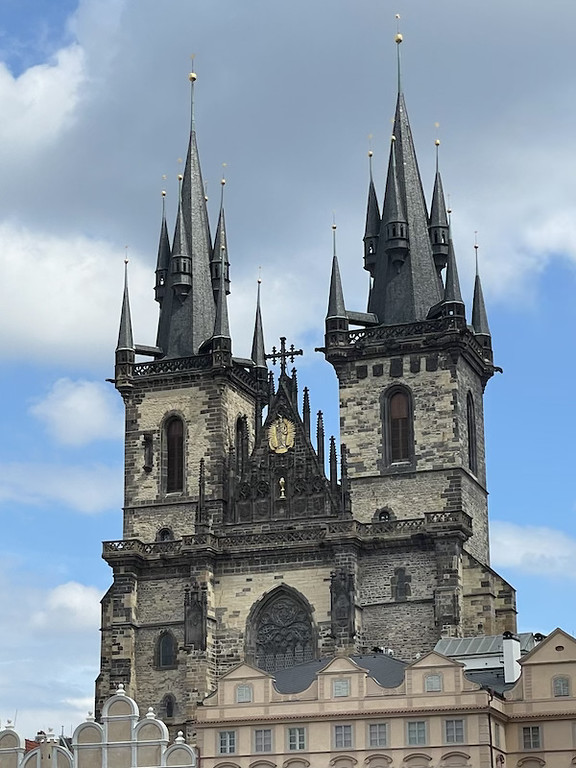 The Gothic Church of Our Lady Before Tyn, on Old Town Square. 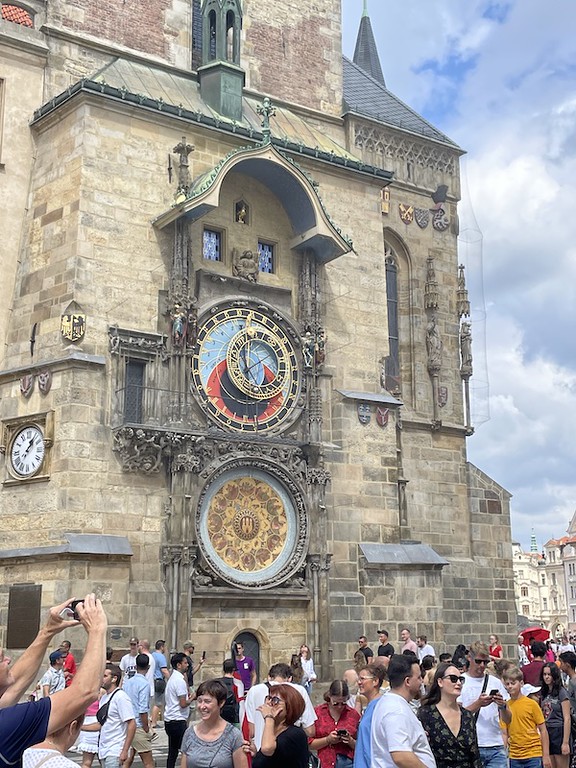 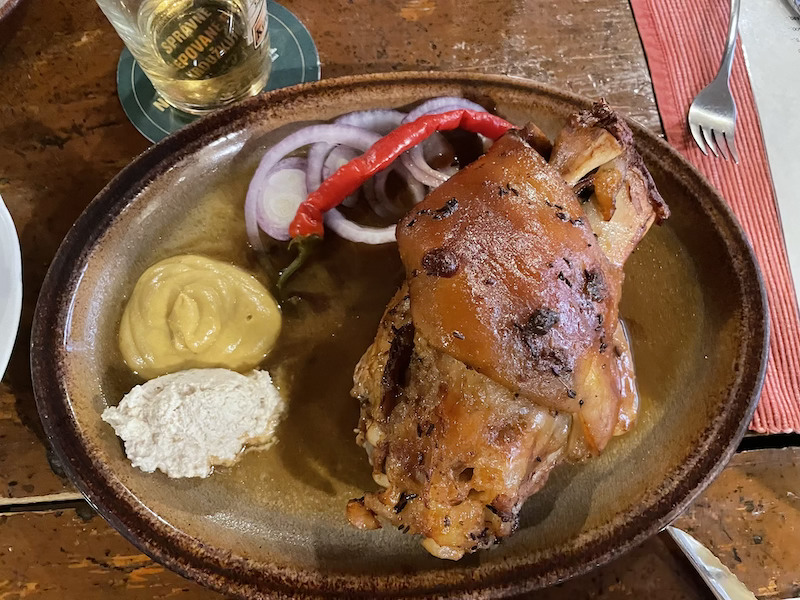 We had to wait for the top of the hour to watch the Astronomical Clock do its’ thing, so we ducked into Restaurace Mlejnice and had another pork knuckle. Same price as a hamburger in most of Europe, but so much better.

Did I mention the crowds here?

From the Town Square we made a walking loop to our typical tourist spots: the weirder ones.

Walking down this side street off the Square, we found this guy hanging out a few floors above us.

Then we came to the Charles Bridge across the Vitava River. Construction started on this nearly 1700-foot long bridge in 1357 and it was finished in the early 15th Century. It’s amazing how solid and complete it is today, and how much weight it can support… 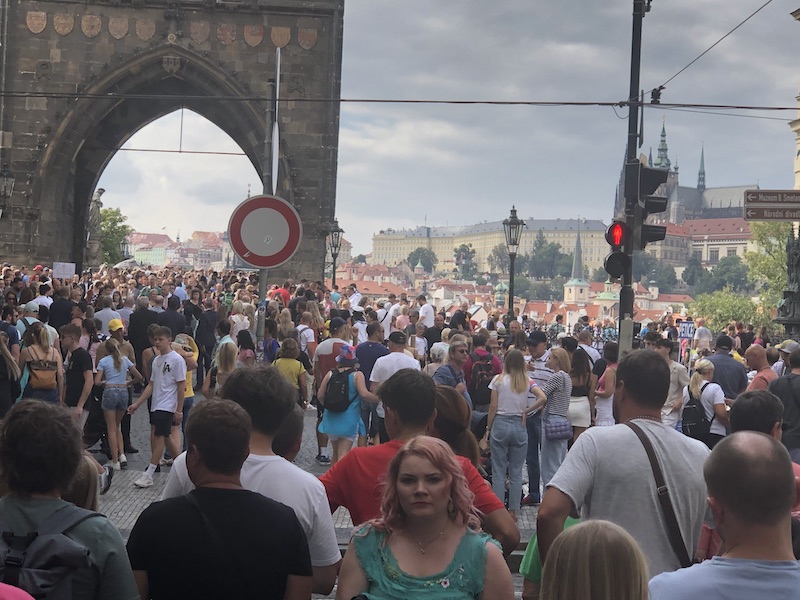 Here’s a photo looking across the top of the bridge. Did I mention Prague has a tourist problem? 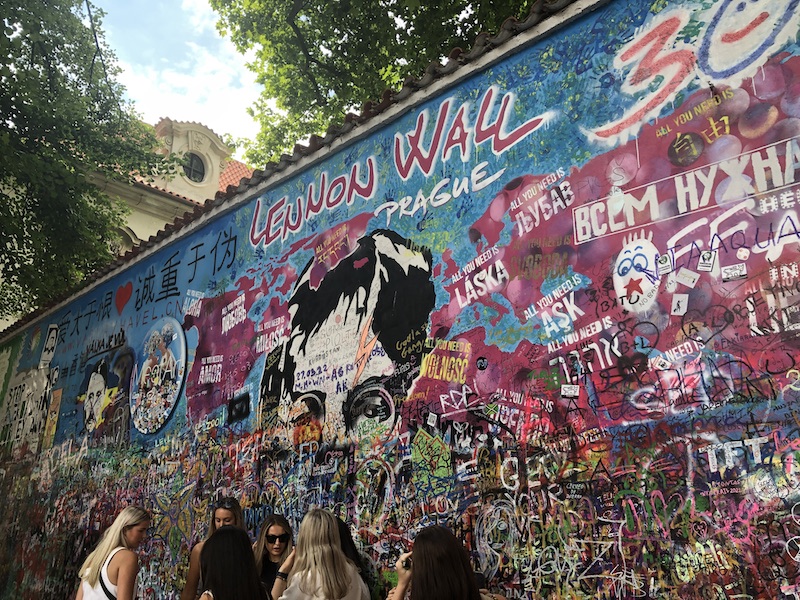 We walked across the Charles Bridge (eventually), to the Lennon Wall. The wall surrounds the seat of the Maltese Order. Beginning in the 1960s, messages began appearing on the wall against the then regime. In 1980, John Lennon’s face was painted on the wall, and was perceived as a symbol of peace and freedom. In 2019, on the 30th anniversary of the fall of the communist regime in Czechoslavakia, the Lennon Wall was declared a memorial place.

Currently, in front of the Lennon Wall, are strung thousands of poems in many different languages, all in support of Ukraine. 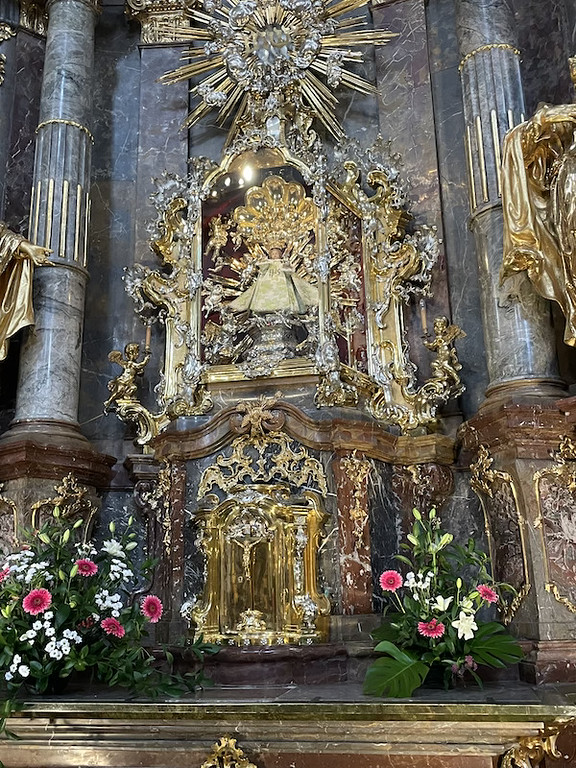 Then it was a short walk to the Church of Our Lady Victorious to see the Infant Jesus of Prague. I’ve mentioned before that I’m not a religious person, so I’ll let you do your own research about this wooden doll and the often bizarre rituals that people subject it/them to. And I will refrain from further comment, other than to say there’s a lot of bling going on in this church.

Then it was a hike up the hill to the Prague Castle, which we didn’t actually walk through; we just decided to take photos from outside, as between the heat and the crowds we had reached our tourist limit for the day.

We hiked back down the 240 or so steps and to a Metro station to catch a train back to the apartment and plan our getaway for the next morning, satisfied that we had done a fair job of getting a “feel” for Prague in our own twisted way. And I didn’t seem to suffer an long-term ill effects from being immersed in so many people…something that is definitely against my tendencies.