My buddy Caleb showed up the other morning on his new 700 Tenere. I had a spare rear rack due to some last-minute modifications, so we installed it on his bike and went for a ride. Seeing as it was just me, and we were only going for a couple of days, I left the panniers and all the camping gear at home. This was mostly an opportunity for me to get a feel for the bike, both on-road and off-road, and gather any feedback for changes I had made and/or future adjustments.

I have a backroads route that I like to take from home out to Luckenbach, Texas (the tiny town that was the subject of the Waylon and Willie song of the 70s; if you’re not familiar with it, now is a good time to have a listen). Luckenbach has a great “feel” to it, even though it’s become a bit of a mini-Disneyland Frontier Town with all the tourists. Still, it’s a fun place to stop on the way deeper into the Texas Hill Country. And if you’ve never been in the area, within a 20 mile radius of Luckenbach there are dozens of vineyards and wineries.

From Luckenbach, we rode through Fredericksburg and on to Kerrville for the night.

We were up and moving early the next morning, as we had some off-roading planned and still a bit of a trek to get there. It had rained overnight, but wasn’t raining when we left. Other than a few light sprinkles, we got lucky and missed the rain, but the roads were wet and a bit slick on the way out through Hunt and headed towards Rock Springs, and the crosswind at times brought back memories of fighting across Patagonia on the way to Ushuaia. Once we left the pavement and dropped into some canyons, the wind was blocked and the riding was great. 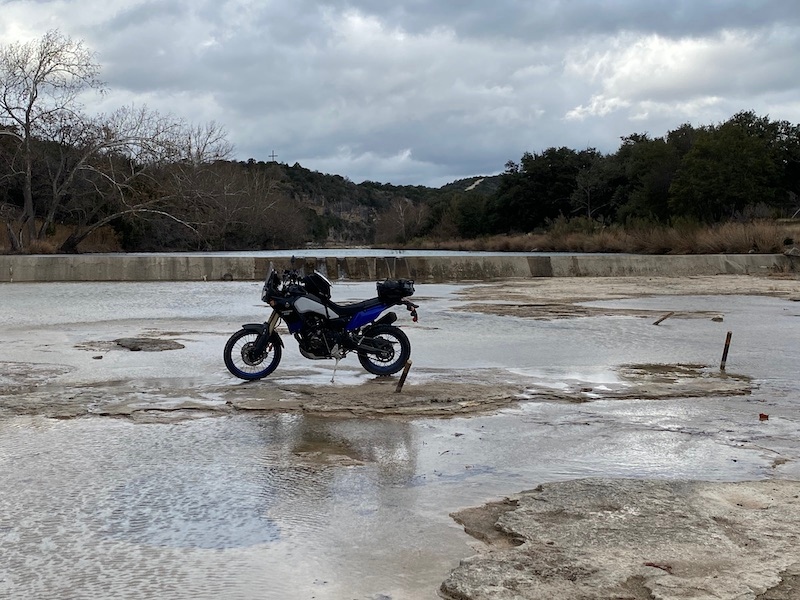 Caleb’s 700, crossing below a small dam in the Texas Hill Country.

Along with a couple hundred miles of pavement, we ended up doing about 150 miles of dirt roads, mostly small ranch roads with several low-water crossings and dozens of bump-gates. Both bikes performed very well (Caleb’s is all stock, and he had already done some off-road with it in Georgia before today). I was surprised at the traction offered by the stock tires in the dirt, and the lack of slip when accelerating hard out of corners. The stiffer rear shock spring and damping adjustments to the rear shock still worked fine even without the heavier loads of the panniers and passenger, though it was definitely noticeable. These tires should take us through the first three or four countries if we are able to stick with our “Plan A”. Then I’ll likely opt for something a little more dirt-oriented, as I prefer to travel that way. 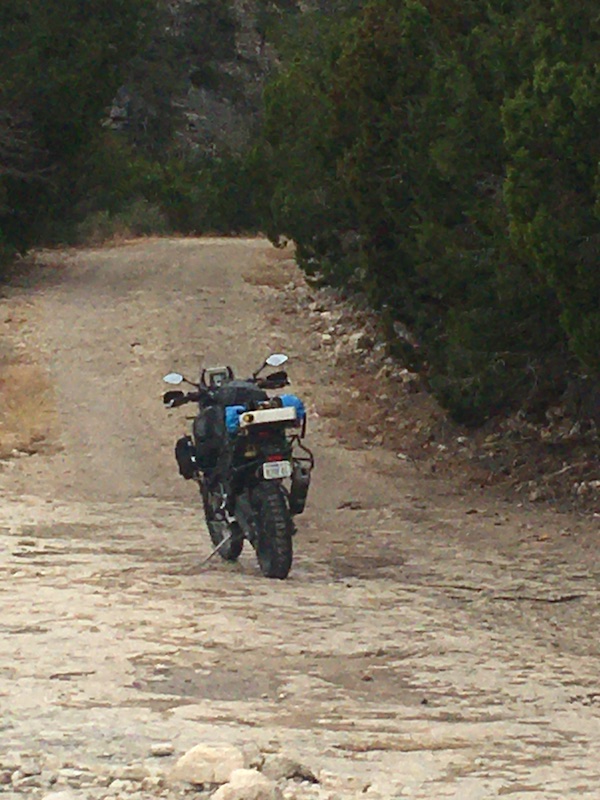 Lots of great dirt roads, with everything from gravel, caliche, dirt, sand, and rock. 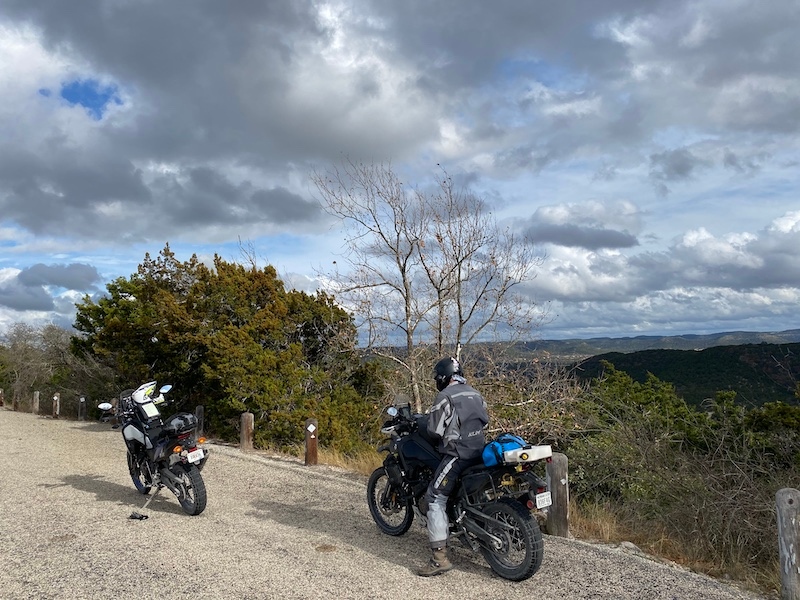 Quick stop at a scenic overlook before we headed home (yes, if you got closer to where I’m sitting, it’s a great view).

At the end of the day, we parted ways in Bandera, which was about an hour and a half for each of us to get to our destinations that night. We covered about 400 miles that day. A good initial introduction to the bike, its’ capabilities and my alterations.