Looking at the map, there were basically two roads from where I was to where I was going…one was CA-5 and the other was CA-13. According to Google Maps, it was a toss-up: about 250km and just over 5 hours either way. CA-5 had one long straight section that looked pretty boring, so I chose CA-13. And that was the beginning of my lesson in route selection.

I stopped at the ATM on the way out of town. My XT250 doesn’t completely blend in with all the 125s, but it doesn’t exactly stand out either.

Parking at the bank…

I knew the road would be relatively straight and at low elevation (warm) for the longest part of the day. I had a few nice climbs and good views in the first 50 miles.

I passed a guy on a bicycle headed the opposite direction as I rode into a small town, and he waved, so I turned around and chased him down.

Kris is from Germany. He started in Ushuaia, at the southern tip of South America, last September on a one year ride. He’s headed to Cancun and will fly home from there. He said next year he’s going to get his motorcycle license and do the next trip on a motorbike!

About thirty minutes after meeting Kris, I stopped for fuel and as I was preparing to leave, Marvin rode up on a KLR650. He started in New Mexico in January and has made it this far south. He asked me where I was headed and I told him Semuc Champey.

“Which way are you going?” he asked.

“I’m going to take this highway”, I replied.

“This highway doesn’t go to Champey.”

Hmmm. Well, that’s interesting. Not what I thought I was going to do today. Oh well.

I took off, and shortly the road turned to fresh concrete.

I rode along on this nice, new concrete road for miles along the side of Lago de Izabal, a huge lake in southeastern Guatemala. In the back of my head, I had two conflicting thoughts:

And just like that, everything changed. The nice, new shiny road went from the above, to this:

I rode through a couple of small villages, and then into the larger town of Cahabon. It was Saturday and the local market was in full swing, taking up all of the main street of town. I rode around for a few minutes and couldn’t find a way through town. Backtracking, I found the local Policia, and asked how to get through town. He gave me a detour around the market and I was back on the dirt road and heading west. The scenery continued to impress as I climbed. 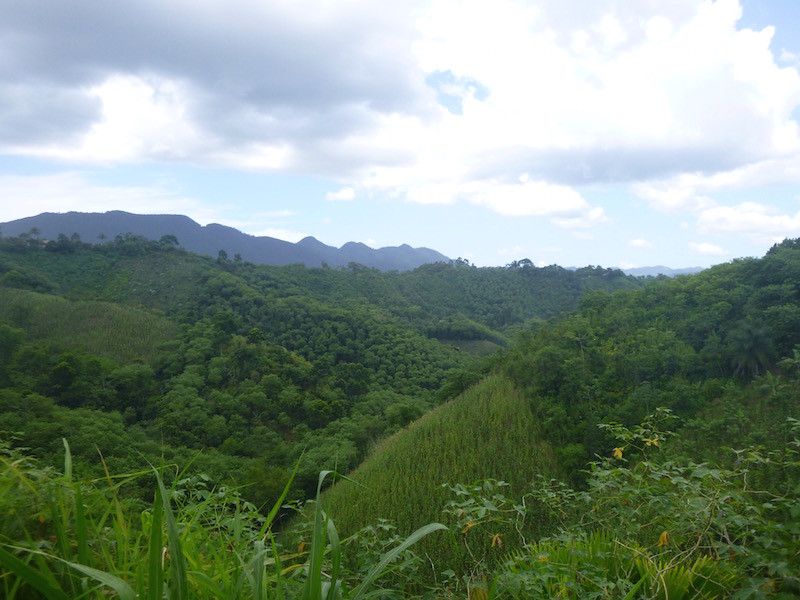 Notice the hillside where it’s been clear-cut and then planted in corn. I passed many hills like this. It’s amazing that someone can climb that hillside, much less till and plant corn on it. But this is the way it’s done throughout Guatemala and Mexico.

Eventually I pulled into Lanquin, and then south down a very steep, rocky path to Utopia Lodge, my home for two nights. I was quite glad to be on the little bike and not on something like the Tenere or a BMW 1200GS.

The main lodge at Utopia

Cabana for the night. You can just see the river through the trees on the right.

Of course I was the only guest that drove in with my own vehicle. It’s a hostel, and the place was packed with backpackers from the U.S., Canada, Italy, France, Britain, Germany, and other places I’m sure I missed. They all rode the bus for more than eight hours, either from Guatemala City or from Flores to get there. And I was about to find out why.

6 thoughts on “Flores to Lanquin”