The 1982 Split Enz song was “Six Months In A Leaky Boat”, and that’s the song I can’t get out of my head as we ride off the ferry in Bellingham, Washington. It’s only been three and a half days, and as far as I know, it wasn’t leaking. It was a long four days though. I guess I’m just not cut out to be a cruise ship tourist. I know this wasn’t a cruise, and I’m sure a large part of the attraction for many cruise participants is the buffet. No buffet here. Meals are served on a regular schedule, and a limited menu, and they cost extra. In fact, even a room costs extra; you don’t have to have a room to ride the ferry for four days from Alaska to Washington. You can’t stay in your car, or your RV, but you don’t have to have a room. Patience is a good thing to have, and it’s probably best if you’re not someone like me, that wants to be constantly in motion. I never took up golf for the same reason: too slow. Motorcycle racing? Yes, please. Skydiving? Sure. Ferry = low/no adrenaline ride, at least until the open ocean gets things rocking.

For those who aren’t familiar with the Alaska Marine Highway between points in Alaska and south, here’s a very short version of how it works:

Pedestrians (backpackers, bicyclists, etc) board first. Most, if not all, of these people do not have rooms on the ship. They make their way as fast as they possibly can to the upper rear deck of the ship. Here there is a large covered area with chaise lounges and heat lamps on the ceiling. They throw their backpacks on a chair, and that is their claimed living area for the next four days. Those that arrive too late for a chair pitch their tents on the open deck.

This is what the aft upper deck looks like after the backpackers board. I can’t blame them. The price of a cabin is about as bad as the price of a room at Deadhorse.

Motorcycles board next. You must tie your motorcycle down, and you must provide your own tie-downs. Oops, I forgot about that. I carried straps on my 250 lst time for just this purpose. This time I have to improvise, and I end up using the bungee straps from our camping bag. They’re not really tie-downs, but they seem to do the trick.

Cars, RVs, large commercial vehicles, etc load next. Those carrying pets are not allowed to take them above the vehicle deck. The animals must ride in the cars the entire four days. Owners are permitted to go down to their vehicles once every six hours or so to let their dogs out of the car to do their business on the vehicle deck. Every dog I ever had would have chewed the seats completely out of the car by the second day out of sheer boredom or nervousness.

The ferry makes several stops along the way. We stopped in Juneau from midnight to 3am, in Sitka, and in Ketchikan for a couple of hours each. You are allowed to go ashore during this time, but we chose to stay on board, as between the odd hours and the short time limit, it didn’t seem worth it.

The first time I took this ferry (from Skagway to Bellingham in 2004), I didn’t get a cabin. And being on a motorcycle, we were too late to claim lounge chairs under the heat lamps. We set up the tent, but ended up lashing it to the railing because the wind was so strong (and there’s no place to drive stakes into the deck, obviously). After one day I put the tent away and ended up sleeping on any available chair or couch inside the lounge areas when possible. Seventeen years later, we spent the outrageous extra amount for a cabin, and spent most of our time there, sleeping. The cabin is about five feet by twelve feet, but that includes the two bunks and the bathroom. So there isn’t really any place to sit other than the bunk. Other than the fact that there is a door on the bathroom, it doesn’t look much different than the typical prison cell.

The views are worth taking the ferry. It’s the same views as a cruise ship, without the buffet. Some of the passages are so narrow you’d swear there’s no way a ship this size could fit through there. More than once I thought we were headed for the beach but we turned at the last instant. 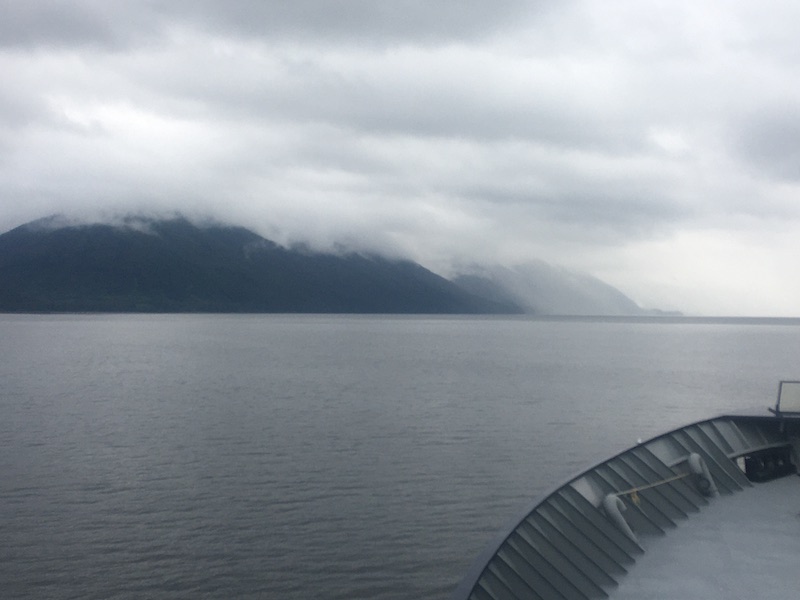 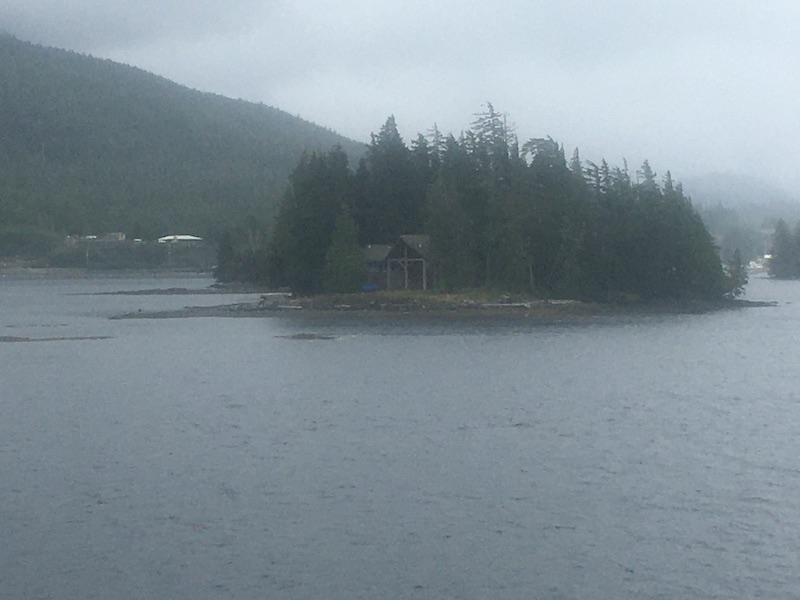 As a devout hermit, I fell in love with this place. Their own private island, just large enough for the house and enough trees to block the view from land. But not from the ferries and cruise ships. Yeah, that would be a deal breaker for me, I guess. But you can’t beat their view looking out when there aren’t any ships in the way. 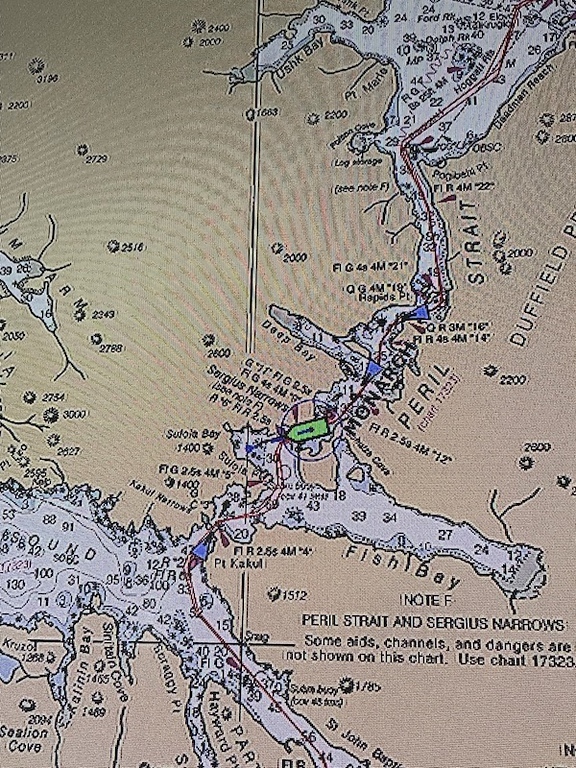 Hard to see here, but this is a photo of the live track from the ship’s bridge, showing part of our route, through the Peril Strait (apt name). See the green ship in the circle? That’s us. Wedged between land and about to make a couple of very sharp S-turns.

I believe everyone who travels long term needs one or two personal extravagances. Ours are the AeroPress coffee press and a deck of Phase 10 cards. This has turned into an almost nightly ritual at the campsite, and two games a day on the ferry. 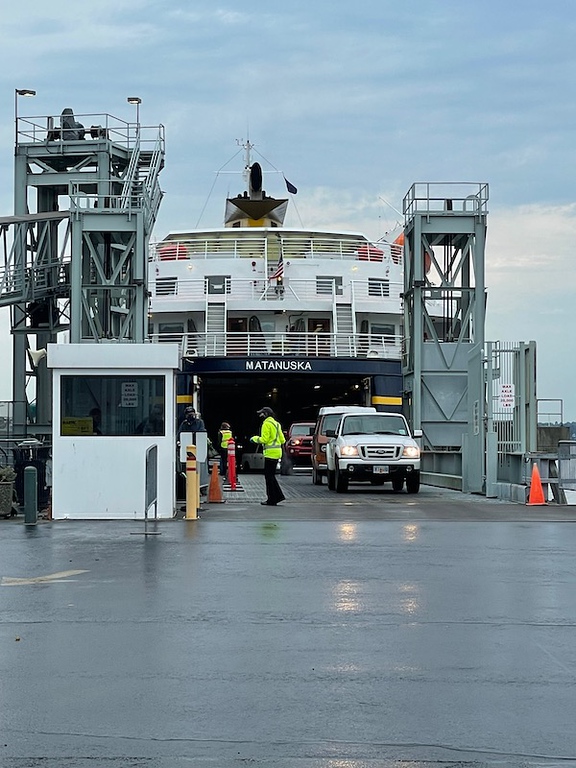 Leaving the Matanuska ferry in Bellingham, Washington after three and a half days. We departed Haines, Alaska on Saturday at 7:45pm and landed in Washington at 8am Wednesday.

For the price of the ferry ride (without meals), we could air freight the motorcycle to Europe, and buy two coach class air tickets, and be riding in Europe within a couple of days. I had regrets several times during that four days, wishing we had saved the expense and just ridden back through Canada with Kelly and Jens. But today as we sit in Idaho, we’ve heard that Kelly and Jens are stuck in northern BC due to weather (which was my main concern and reason for taking the ferry). So I guess it was a trade-off of sorts.

At least we didn’t spend six months on a leaky boat. It just seemed like six months.

Fun Trivia Fact: Split Enz’ song was banned in 1982 by the BBC because Britain was in the middle of the Falklands War, and the BBC thought a song about leaky boats during their naval war was inappropriate. Never mind that the song has nothing to do with the Navy, the war, etc.

4 thoughts on “Four Days on a Ferry Boat”