My niece, who is a sailor, along with a few other people have been asking if I plan to perform a ritual when I cross the equator. Not being a sailor myself, and not having served on a ship, I had to look up the ceremony that is performed on ships as they cross the equator with first-timers aboard.

Today was my day, and although I still have no idea what the Overlander’s equivalent of the Crossing the Line ceremony may be, I am happy just to say I am no longer a Pollywog and am now officially a Shellback, or whatever the land-based version might be. And thankfully it didn’t require me to dress in drag or any other hazing.

It stopped raining last night and this morning dawned clear and beautiful. After giving my tent and bike cover some time in the sun to dry, I packed up, had a delicious breakfast at Finca Sommerwind, and said goodbye to Patricia and Hans.

Patricia (“The Boss” and Chef) and Hans (The Server and all-around great guy) from Finca Sommerwind Campground in Ibarra. Hans told me I wasn’t allowed to leave without supplying a replacement camper in my place. So I owe them one.

Heading south on the PanAmerican Highway, I passed through several toll plazas. Unlike in Colombia, where there is a separate and free lane at the toll plazas for motos, in Ecuador motorcycles are required to pay a toll of 20 cents. I really wished it was 25 cents, because I started the day with ten quarters in my jacket pocket so I could easily pay the tolls, and at the end of the day I had more coins than when I started. Apparently there is no such coin as a nickel in Ecuador. You hand the toll operator a quarter and you get five pennies in return. Ugh. After the first couple, I quit waiting for change. I already have about five pounds of various foreign currency in my tankbag that I can’t exchange because nobody wants coins at the exchange places.

About 7 kilometers south of Cayambe is the Quitsato monument for the Equator. Across the street is a concrete globe in a park, which is not on the equator. La Mitad del Mundo (The Middle of the World) is Ecuador’s official tourism equator monument, and at nearly 100 feet tall, it is impressive. Unfortunately, it was erected on a site marked by a French expedition in 1736, and they missed by a good ways. All of these were placed before GPS, and I guess it was easier to fool people then (I think they were both honest mistakes at the time), but apparently the tour buses continue to take the hordes to La Mitad, even though it isn’t on the equator.

Impressive monument. Too bad it’s not actually at the equator.

It’s easier these days to confirm whether you’re at the equator or not, since even most smart phones will tell you GPS coordinates. I stopped at the sundial marker on the side of the highway and asked the guy at the gate if in fact this was really the equator. he not only assured me it was (and I confirmed it with my GPS), but he pointed out the “Fake Equator Museum” next door, where they have interesting information on the various scams that people fall for at the equator. (The Fake Equator Museum is actually the restrooms for this site, but it’s a great second use of the building….and you get to watch the water swirl counterclockwise in the toilets too!)

Actually straddling the equator with my wheels. 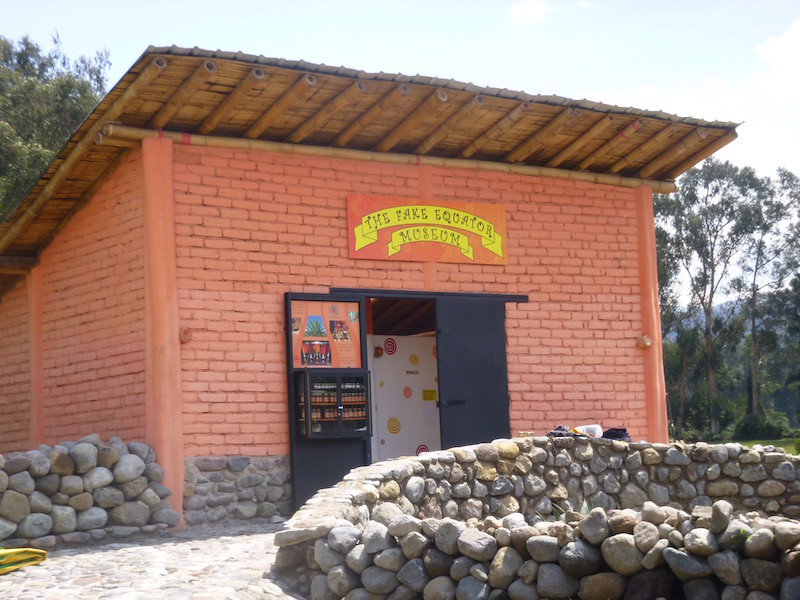 The restrooms at the real equator.

The guy at the monument gave a 15 minute presentation in good English that explained how the pre-Inca civilizations understood the techniques of charting celestial movement for agricultural purposes, and the many sites that have been discovered in Ecuador from pre-Inca times that confirm their use of these sun-tracking methods. His presentation also focused on how we have been teaching geography wrong and all maps are drawn wrong; north should not be “up”. North should be to the left, and the equatorial line should run top to bottom on all maps. The organization promoting this, Quitsato, makes an interesting argument promoting this theory. Although at first I felt like I was in a Flat Earth Society presentation.

After taking the obligatory photo at 0.0000 latitude, I continued south to Quito. I got lucky, and arrived into this very large city just after the rain had stopped, and on a Sunday so traffic was not a problem. I found a hostel with a one-car garage that was willing to let me store my bike there for a couple of nights. The downside is that it is four to five times the price of every other night I’ve spent in last week. Okay, that sounds extreme, but I’ve only been paying $5 a night to camp and $7 for a hotel room. But I need to visit the local Yamaha dealer tomorrow so I will be here a couple of nights. After that, it’s back to sleeping cheap.

6 thoughts on “From Wog to Shellback”