We left Flåm in sunshine (nice for a change) and headed north through the longest road tunnel in the world. The Lærdal Tunnel is 24.5 km long, or 15.23 miles. It’s also fairly straight and quite boring, after the corkscrew and disco tunnels we’d ridden through in the past few days.

We took a bit of a meandering path, as tends to be the norm here due to all of the mountains and fjords, but I added to that as well, simply for the scenery. Along the way, we saw some beautiful scenery (more in the video below), and got caught in a goat-jam. 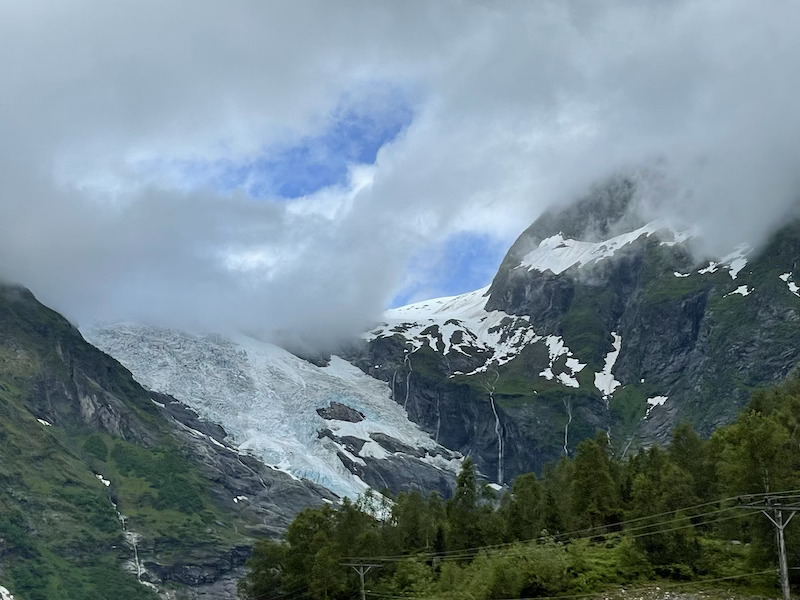 It seems to just keep getting better. 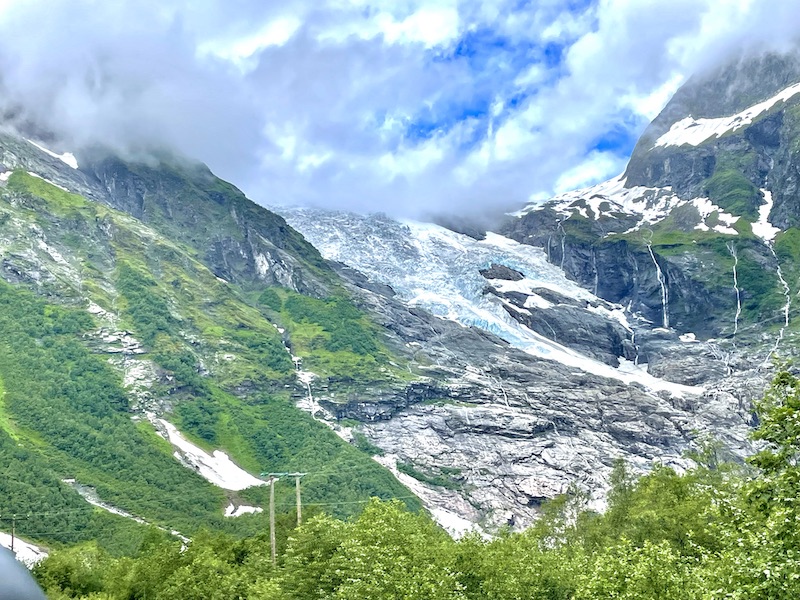 And some refusing to cross the road.

We eventually ended up in Stryn, then entered the relatively short 4.5km long Oppljos Tunnel. Just after the tunnel, we turned off of 15 and onto 63, and the scenery once again went from green and blue to white and gray. 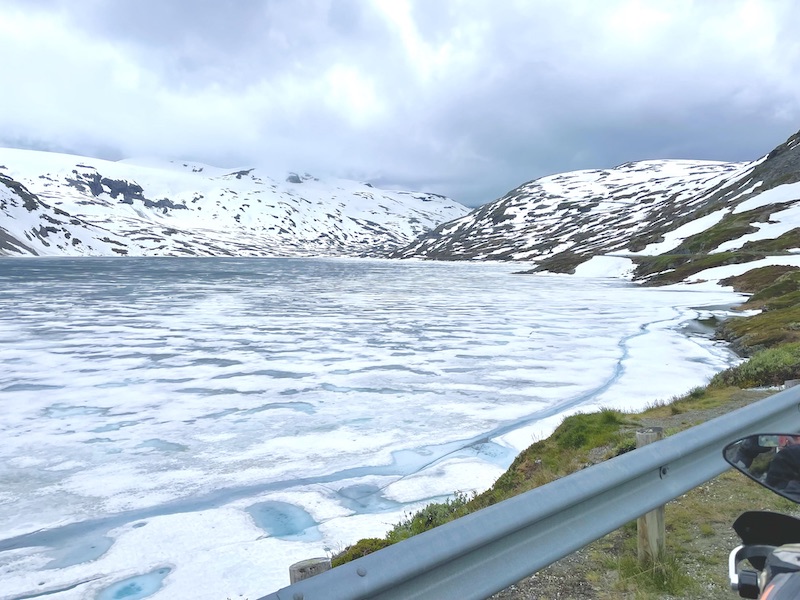 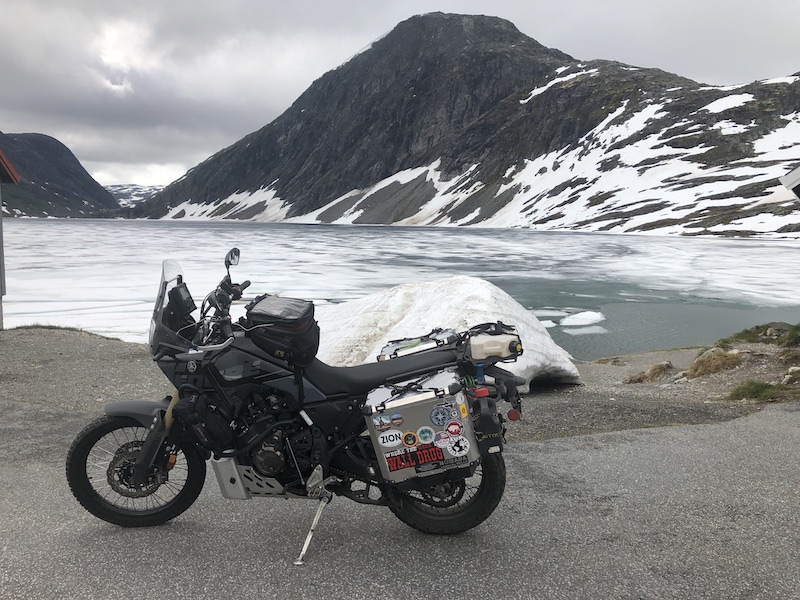 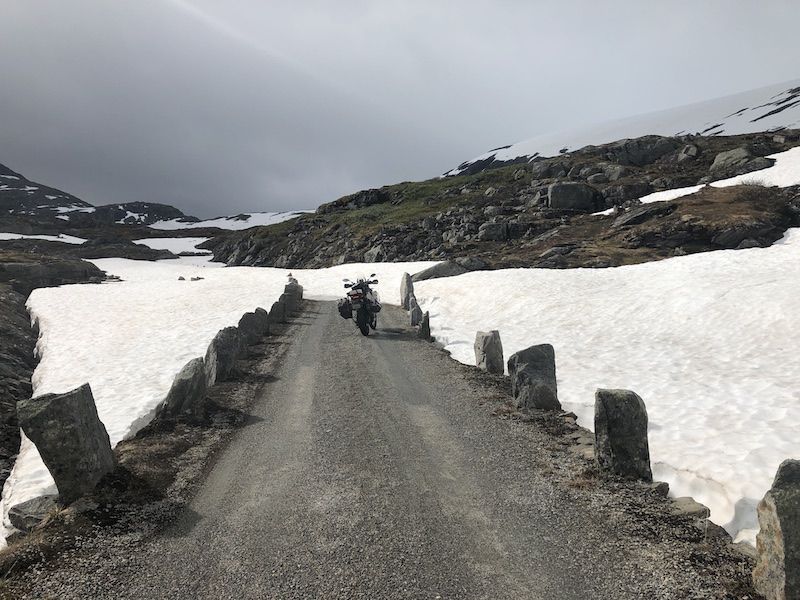 End of the road? This time of year, yes. 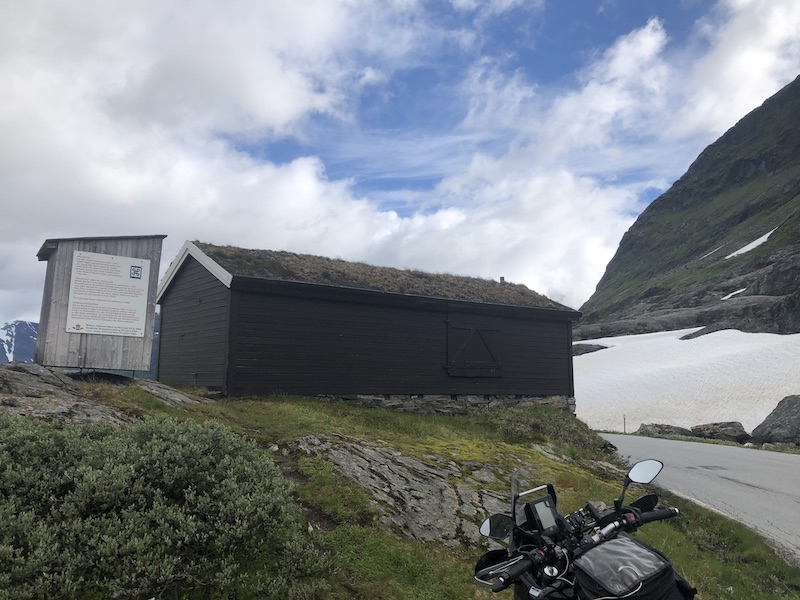 These “Soil Sheds” are located along the higher part of the road. Before the introduction of the rotary snow plow in 1947, it took hundreds of men twelve weeks each year to clear the roads by hand and shovel in the spring; the snow would be between 20 and 40 feet deep. Black soil was stored in these sheds, and spread on the snow. The heat from the sun shining on the black soil melted the snow.

As we crossed the far side of the pass and started down, the scenery left me breathless.

You can see the winding road in this photo, as well as several waterfalls. These photos don’t do it justice.

I was thinking to myself, “Okay, I can go home now. Nothing could possibly top this.” 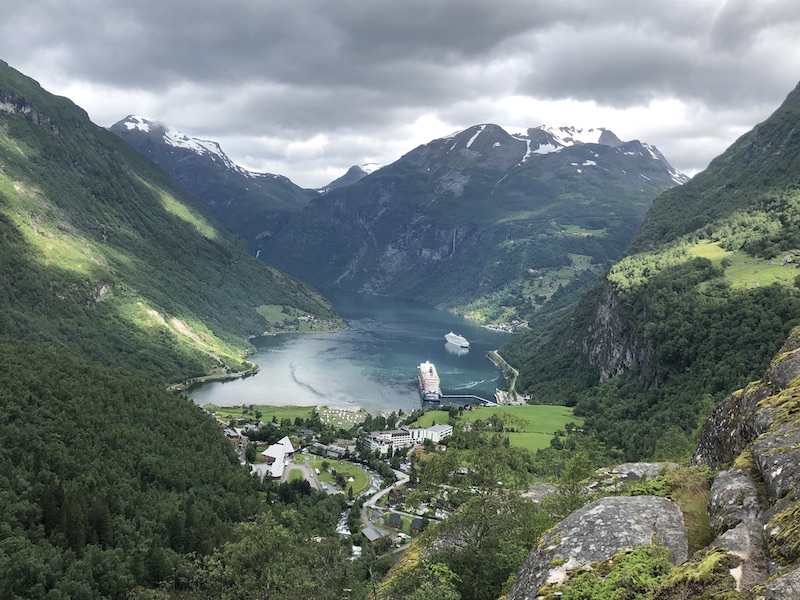 Looking out over Geiranger, with two cruise ships in the harbor. All of those little white dots in the center of the photo at the bottom of the fjord are RVs; that’s where we camped for the night.

It started raining right after we pitched the tent, and didn’t stop until early morning. We were in a soggy, muddy spot, but by 10am the sun was coming out and the tent was beginning to dry. We packed up and headed back up the other side of the fjord to Trollstigen. 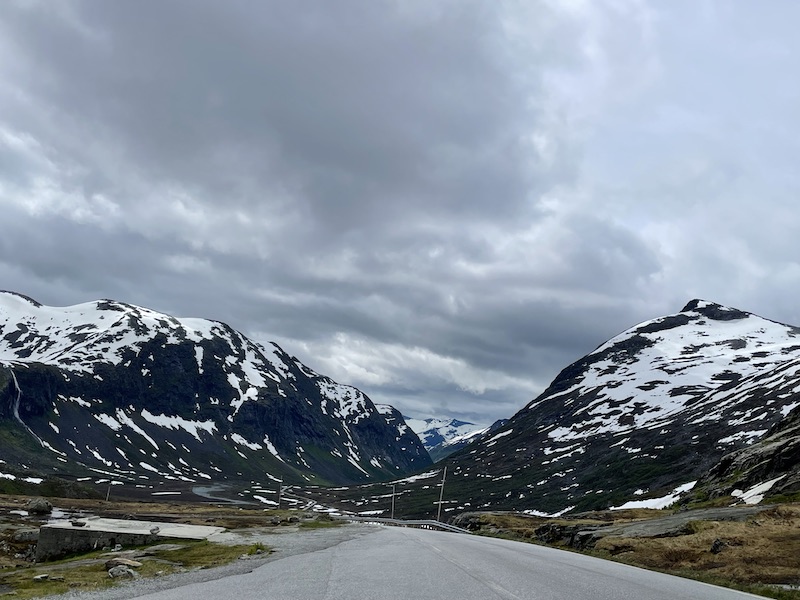 Not Diana’s favorite scenery (or maybe it would be okay from the heated seats of a nice car). She is coming to terms with the idea that this is going to be the norm for the next week or two. 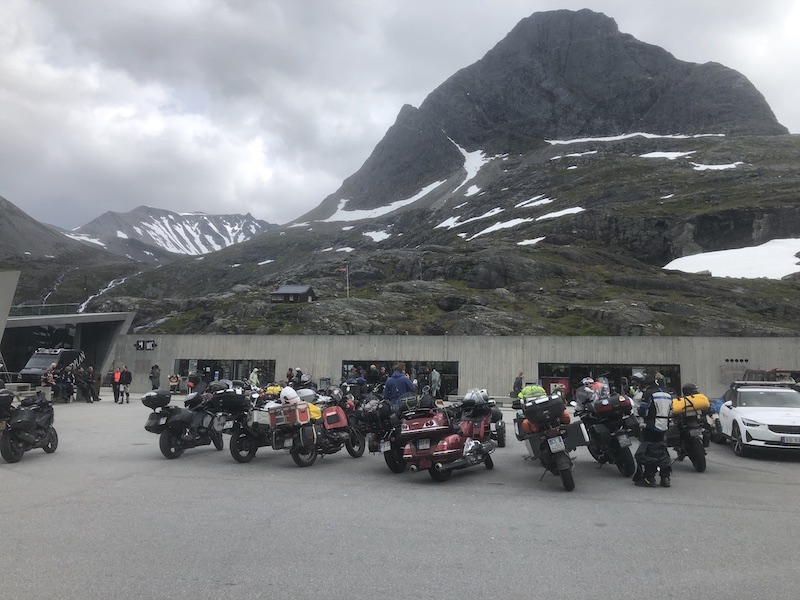 The Trollstigen cafe and road stop just off the pass, a favorite motorcycle gathering spot. The plates in the parking lot were from Italy, Lithuania, Sweden, Norway, Poland, and, uh, Texas.

We were approached by a Polish couple:

“Are you really from Texas?”
“Yes, ma’am.” (It’s what they are expecting to hear.) “And you?”
“Poland.”
“What part of Poland?”, I asked.
“Zakopane.”
“We’ll be there next month!”
“Too many tourists in August. Better to come in May or September.”
There’s that honesty shining through again.

The cafe was closed for remodeling, but there was a trailer in front selling coffee and ice cream. And people buying both. 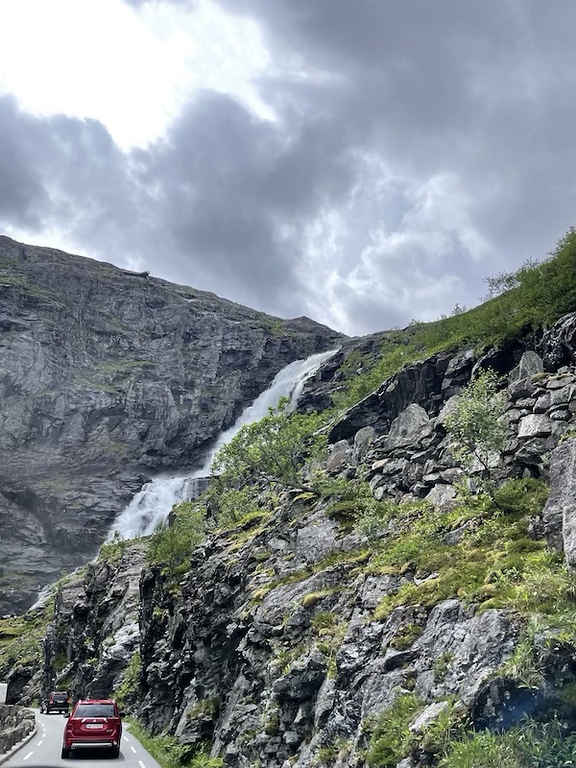 After you enjoy the waterfall, look at the road. This is the typical road in the mountains here. Now picture a large tourbus passing the red car in the opposite direction. Yep. All the time. The hairpins get a bit, er, “hairy” with the buses. A couple of days ago, we were behind a car, with several more behind us, going down the switchbacks into Aurland, when a van coming up refused to yield. He wanted the cars to back up to a turnout rather than him back down to the turnout that was only about 100 feet behind him. Of course, I’m not backing uphill on a fully loaded bike, and the car in front would have to back over me to back up. So I decided to let them play chicken and I went around the car ahead of me. Then the van moved over, I suppose to let me by on his right, but there wasn’t really enough room, and there was no shoulder at all. If I had put my foot down, we would have tumbled quite a ways. We eventually got past, but Diana had to put her hand on the side of the van to help gauge when the pannier was going to scrape. 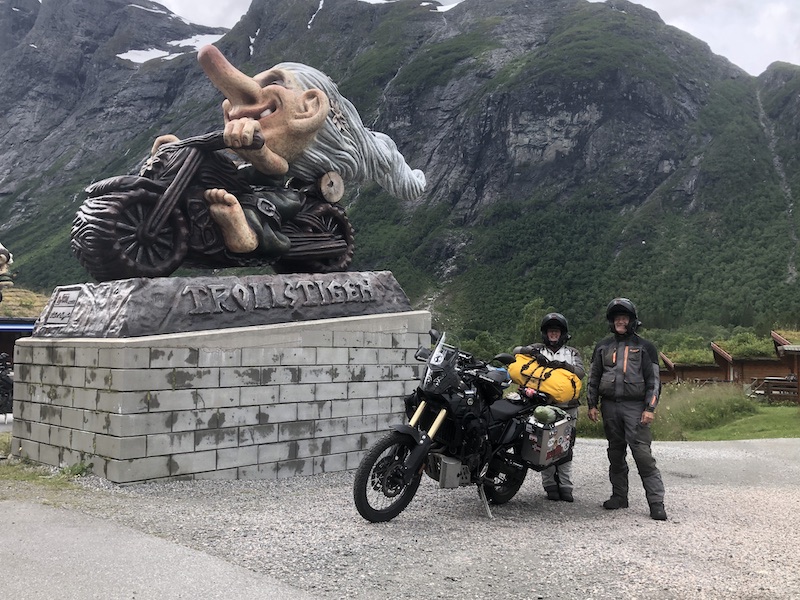 Someone a week or so ago scoffed when I mentioned Trollstigen. “Eh, there are better places.” I tend to agree: yesterday above Geiranger was better for beauty. Maybe not quite as good for pavement, and more tour buses, but it’s the best I’ve seen so far. But hey, it’s still pretty awesome.

So here’s a short video compilation of the last couple of days in Norway:

5 thoughts on “Geiranger and Trollstigen”