Although I am a Native Texan, having been born near the Red River, I spent a good portion of my early years in the concrete jungle of Los Angeles County, California. Each summer my parents would pile us into the family car (and later the family pickup truck) for a trip back to Texas to visit my grandparents, aunts, uncles, and other assorted kinfolk. It was on one of these trips that I recall my parents laughing at a Dairy Queen sign somewhere in West Texas that read “The sun has riz, The sun has set, and here we are in Texas yet”.

That is to say, Texas is a big place, and even in a car on the interstate it takes a while to get across Texas. Interstate 10 from the New Mexico border near El Paso, to the Louisiana border near Orange, is nearly 900 miles across. I live smack in the middle of Texas, so getting out of Texas is an undertaking in itself. I’ve often remarked to friends that when I drive from home to Los Angeles, when I get to El Paso, I am nearly half way there, but still in Texas.

I was aiming for Hunstville State Park for a first night’s stop, as it is sort of the gateway to East Texas on my route, and a beautiful place to camp. Unfortunately for me, the pandemic has created a high demand for campsites, as more and more families are buying RVs and spending time outdoors. The state park was booked, but I remembered a little campground in the Sam Houston National Forest near where we used to ride dirt bikes decades ago. I googled it, and the first thing that popped up was an advisory that the bridge was closed until further notice. However, it seems they forgot to explain that the campground was before the bridge, so apparently many people think the campground is not accessible. Which made for a great night’s stay in a quiet, half-full campground in the forest.

It’s been nearly five years since I headed out on a long trip on my 250 with a full load. It will take several days, or longer, to fall into the comfort and pace of life on the road, but it didn’t take long to get comfortable at my first campsite.

I gotta get this new Klim riding gear broken in. I mean, it’s comfortable already, but it’s new, and shiny. It needs to look a little less flashy. And it will, in time.

I was standing in line at the soda dispenser in a convenience store in a tiny Texas town, when I noticed the two high school boys in front of me taking their time filling their drinks, and whispering to each other and chuckling, obviously at the old man in the strange, shiny gray and black suit and the matte black helmet with the front flipped up, standing in line behind them. Finally they turned around, and one of them asked me “Did you fly a jet here?” They could barely contain their giggles.

I had to think quick. I came up with a foreign accent, which in all honesty, came out of my mouth sounding like a cross between Arnold Schwarzenegger and the Lucky Charms leprechaun. I don’t do accents.

“Ho! Ho! Nee nee, I’m ridin’ a wee mootorbike.” They looked a bit confused. The other one asked “Where are you from?”

They weren’t sure how to handle that. They walked away. I finished filling my drink bottle, went to the counter and paid, and then walked back out to my bike. They were standing there looking at it, with all the stickers from Africa, South America, and Europe all over the panniers. Then one of them pointed to the Texas license tag and said “Why do you have a Texas license plate? “

I just smiled, and switching back to my normal Texas twang. asked “Who’s the bigger smartass now?”

Later in the day, as I stopped for a break, I was approached by a gentleman who seemed genuinely excited to see me. “Can I look at your bike?” he asked. “Of course” I replied, although I felt required to add the obvious “It’s just a 250.”.

“No no” he said, “It’s fantastic!”. It turns out Andrew used to be part of a family-owned motorcycle dealership in this part of deep-East Texas. More surprisingly, in addition to Suzuki, they carried MV Agusta, Ducati, and Royal Enfield. He was very knowledgeable, and at the same time just a good, down-to-earth guy. We talked about Monsters, Himalayas, and California Specials. And he also pointed me down the road to a great hamburger. 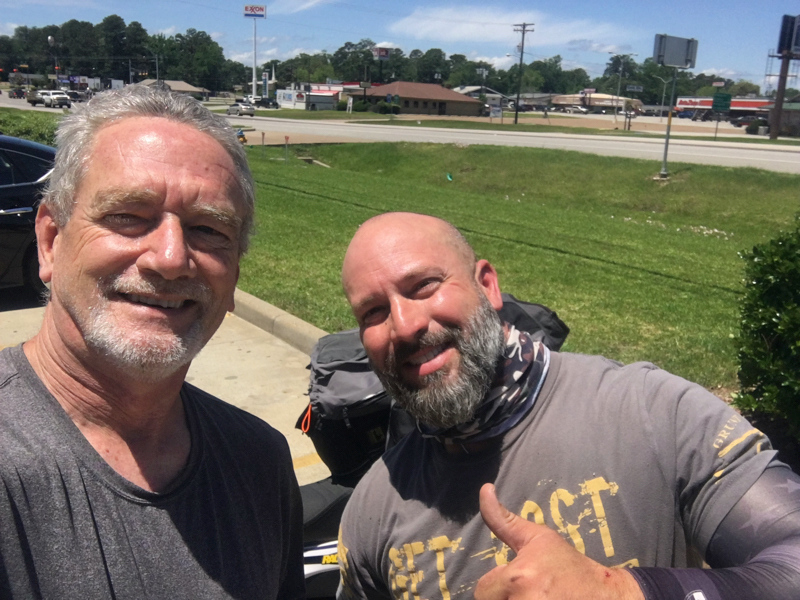 As I’ve said all along, traveling solo makes you more accessible to people. Like Andrew. What a great guy. I’m glad he took the time to wander over and have a chat.

By the end of the day I was in Alexandria, Louisiana, after a significant detour due to me missing a digit while entering the coordinates for my destination that morning. Ah, the dangers of relying on a GPS without paying attention to the big picture. The weather is chasing me, and it looks like I may have about another day or less before it catches me. So I’ll be up early in the morning and on the road again.