It rained heavily again Tuesday afternoon, so I spent all afternoon at the Miraflores Locks Visitors Center learning about the Panama Canal and watching ships pass through the locks. It’s an impressive sight. A huge freighter with only two feet of clearance on each side between ship and canal, being lowered twenty seven feet in six minutes. The speed and efficiency is amazing, from approaching the locks to exiting the second stage of the locks all within less than an hour.

Set of double gates between the first and second stage of the Miraflores Locks. These are the original gates built in 1914 in Pittsburgh. Each weighs 600 tons.

Tug guiding the tanker Torm Caroline into the locks. Not raining yet. Paraiso Bridge in the background — I crossed over the canal on this bridge last Thursday coming into town. 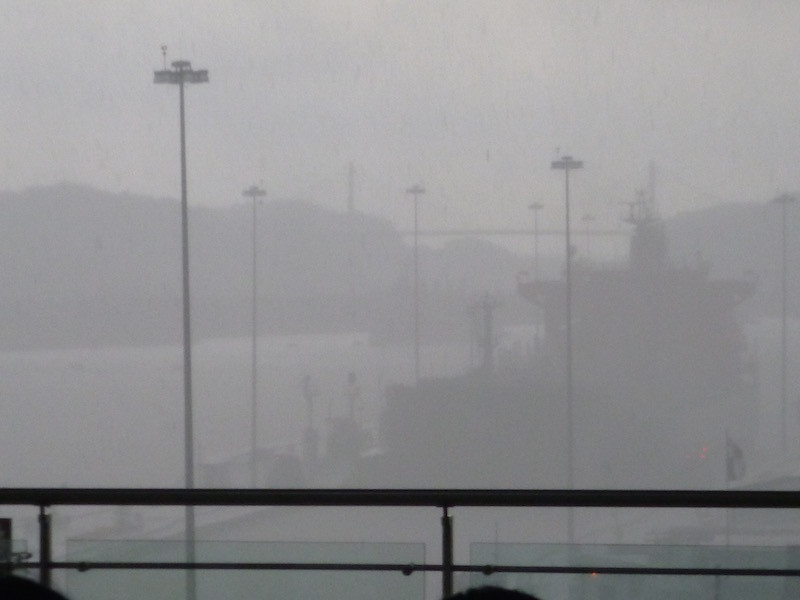 BAM! Now it’s raining. This is what last Thursday was like as I was riding into town.

Water pumped from the first stage to the second stage of the locks at over 300,000 gallons per minute. In six minutes the ship is lowered 27 feet.

Tanker deck is now at road level, gates open and transferred to the second stage where it all happens again. 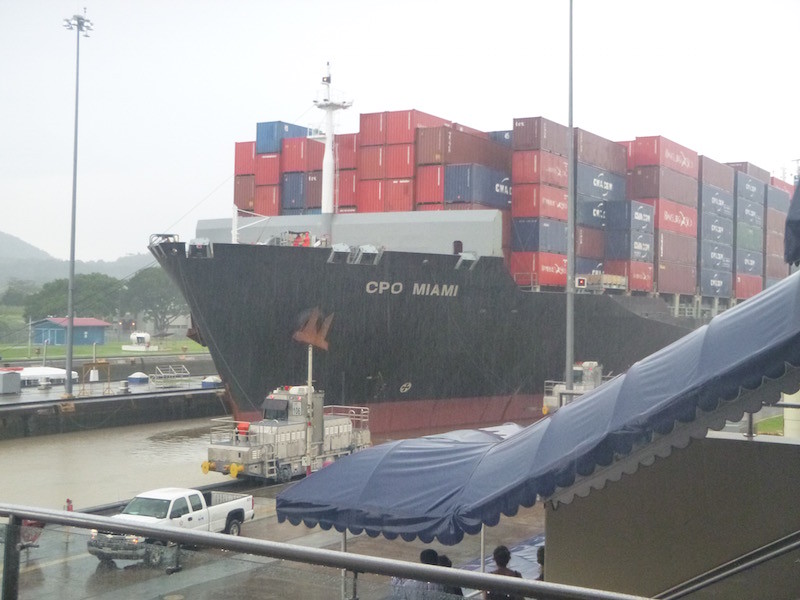 Next up, the CPO Miami, a large freighter. I counted around 1200 shipping containers above deck.

Lowering in the first stage. 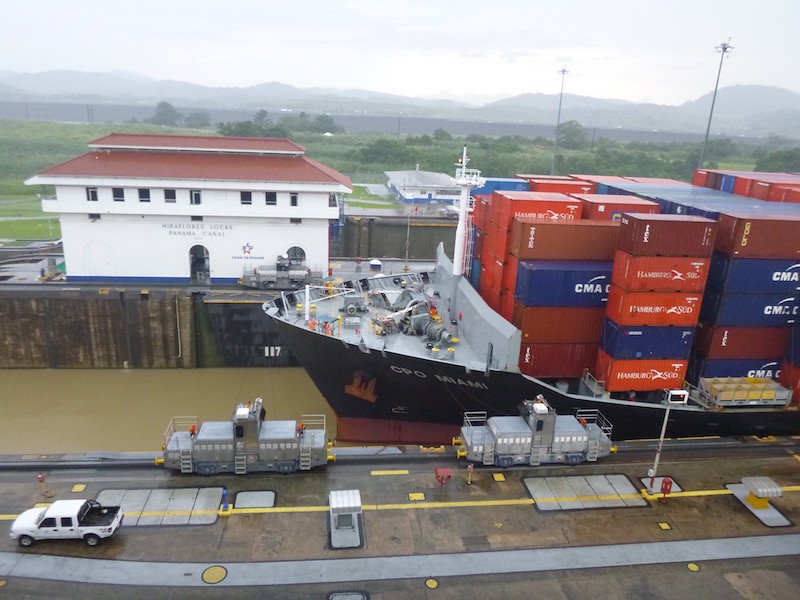 Passing through the gates. There are six locomotives attached to the ship to keep it in position, with only two feet on each side between the ship and the canal. 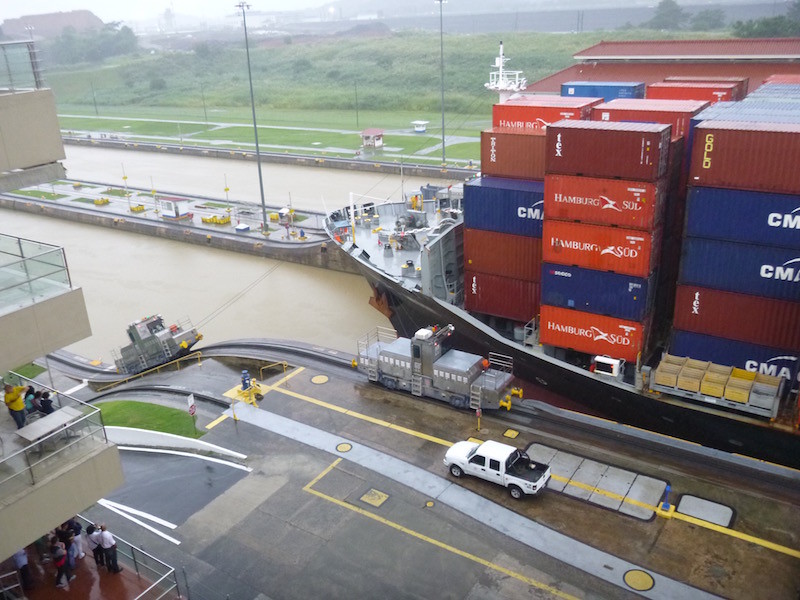 The only place I’ve ever seen a locomotive go downhill at a steep angle. They have to adjust their height as the ship is lowered another 27 feet in the second stage.

One locomotive at the rear on each side. That is one huge stack of containers.

My next house: a couple of these “eco containers” and a cutting torch, and I’m well on my way…

I’m writing this a bit early, as tomorrow morning I have to load up and leave early to ride a couple of hours to Carti, Panama. Carti doesn’t show up on many maps, and in fact even if the town name shows up, it’s likely that the road to it doesn’t show up, or Google Maps tells you it “can’t calculate a route between Panama City and Carti, Panama”.

I’ve found that a lot of directions in these parts of the world have nothing to do with highway numbers, or street names. Usually it’s something like “right after you cross the second bridge”, or “go past the blue house on the left, then turn right”, or “when you get to the fourth dirt road on the left there will be a guy sitting on a stump. Ask him for the directions to the next turn”. Okay, that last one might be a bit of a stretch, but I actually was given directions by a guy in Southern California once on how to find a place in Oregon that included a line just like that. And it worked. But that’s another story…

In any case, I have to meet the Stahlratte and its’ crew at 11am on Thursday morning to load my bike, along with ten other bikes all bound for Cartagena. In case you weren’t aware, there is no highway connecting Central and South America. The Darien Gap is a 99-mile long stretch of jungle with no road between Panama and Colombia. Yes, a couple of people have traversed it in the past. Literally a couple. And it took them a looooong time.

There are basically two ways to get to South America with a motorcycle: put it on a boat, or put it on a plane. Neither is cheap, and both require you to purchase a ticket to get yourself there as well. The plane goes to Bogota, which is near the center of Colombia and not where I was looking to start my South American travels. It’s quick, but requires crating and isn’t very entertaining. The cargo ships are cheaper, but slow, make many stops, and you can’t be sure when the bike is going to show up. That leaves the sailboat option. The popular route is aboard the Stahlratte (German for “Steel rat”), a 110 year old ship that regularly plies the route between Carti and Cartagena, with a two day stopover in the beautiful San Blas islands. More about that in my next post when I have photos and can describe the trip.

I’m scheduled to arrive in Cartagena on October 12th, and should have wifi for a day or two before heading north (yes, it sounds strange, but I will actually be further north in Colombia than I am in Panama City, Panama). The next several days after that entail a tent and beaches, so no communications access.

Which, in itself, sounds really good…

So, hasta luego until around the 13th.

7 thoughts on “Goodbye to Panama and Central America”