“D’ya speak English?”, one of the two bikers in line behind me at the ferry asks in a heavy Irish brogue.

“Not your English, but yes”, I reply, wondering why he asked after seeing the Texas license plate. Then I realize he probably saw the “Montando en todo el mundo” (“I’m riding around the world”) written in Spanish on the back of my spare gas can.

“We’ve got a bit of a problem, and we were hoping you might be willing to help us out” he says. “See, there’s only room for two bikes on the next ferry, and there’s three of us here.”

“No problem”, I say. “I don’t mind waiting. I’m only going about twelve miles to my campsite after I get off the ferry, and it doesn’t get dark here til almost eleven o’clock.”

“Are ya sure? I’ll pay for your ferry ticket.”

They board the ferry, while I wait. It’s a nice day, and I’m in no hurry at all.

Near the end of boarding, the ferry worker directing traffic walks up and tells me there is room for me after all. I ride on, they strap my bike down, and I walk upstairs to find the other two guys.

I tap one of them on the shoulder and he turns around, surprised to see me. “I should’ve taken your money” I say, grinning. They buy me a coffee and we talk until the ferry docks and it’s time to ride off.

I had left Ian & Tricia’s mid-morning and headed west, with several nights planned camping along the west coast of Scotland.

First stop: Falkirk, just west of Edinburgh. I had two reasons to stop here. First up, the Kelpies. 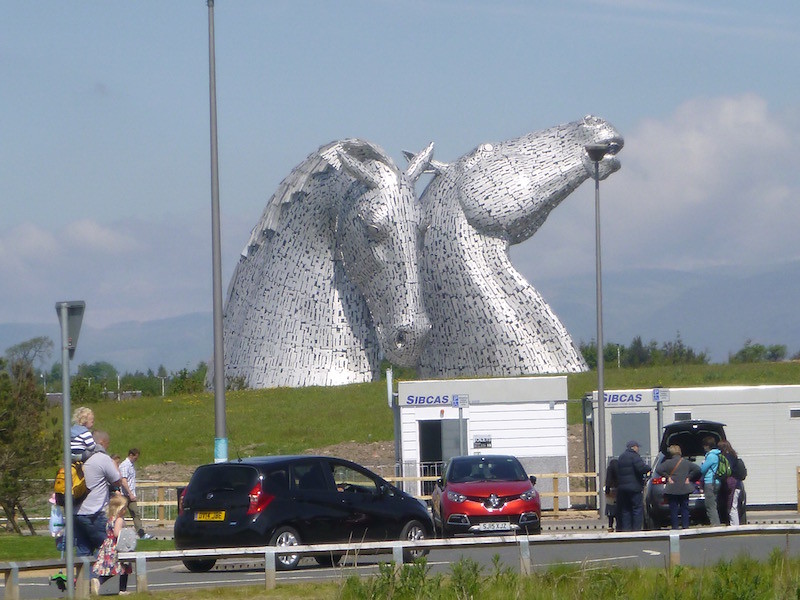 This 100-foot tall metal sculpture of two horses is a monument to horse-powered heritage across Scotland.

Second stop in Falkirk: The Falkirk Wheel. This might be the wildest thing I’ve ever seen, yet it’s a simple concept and very functional. 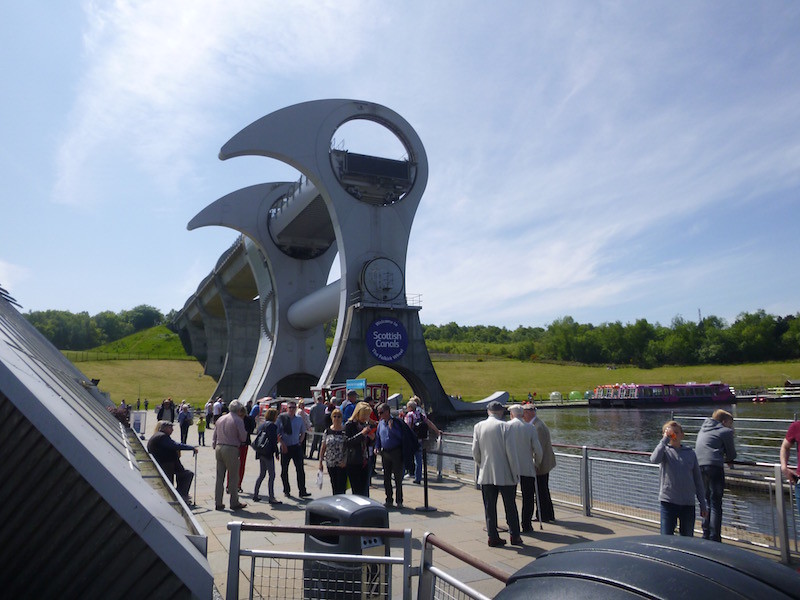 The Falkirk Wheel in its’ “at-rest” position. This is a replacement for the traditional system of locks to raise and lower boats to different water levels. Note the canal extension that juts out to the wheel at the top. 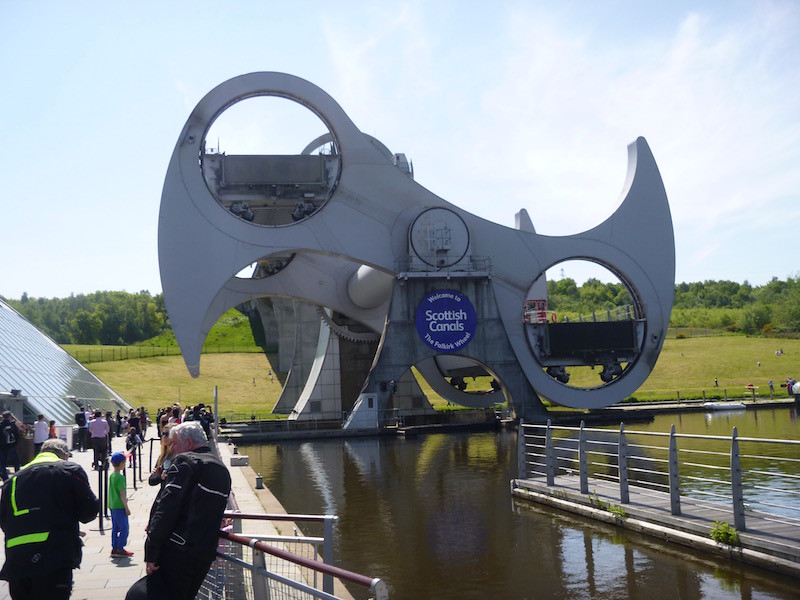 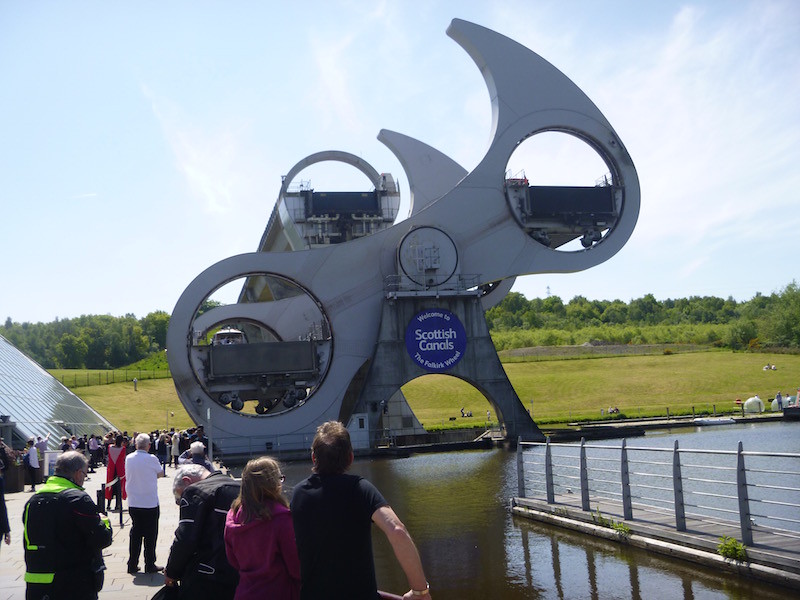 Getting closer. The whole thing takes very little time at all, and I’m sure is much more efficient than pumping water in and out of locks.

After Falkirk I continued west to Oban, where I bought a standby ferry ticket to Craignure.

Ian’s recommendation for a place to wild camp on Mull was fantastic. There was a long stretch of one-lane road (turns out this is the norm here), following the coastline. Between the road and the water was beautiful green grass, and lots of sheep. I passed a number of other people camping before I found a spot, but the opportunities were plentiful and stretched out for several miles.

I pitched my tent near the water, pulled out my chair and watched the sunset. At 10:45pm. It finally got dark about midnight.

And the sun came up at 4:30am. Brightly. By 6am the tent was dry and ready to pack, but it was so quiet and calm that I enjoyed a lazy morning.

Sheep, sheep everywhere and nary a wool blanket to be found. It was cold at night, but when the sun came up it warmed up quickly.

Eventually I rode further north on Mull to Tobermory, where I found an old church that was now a coffee and pastry shop. I had a bacon roll and a coffee at a sidewalk table in the sun, then walked next door to the grocery store and stocked up on food for several nights of camping in the wild.

This old church in Tobermory had been turned into a local version of Starbucks (but with better food). 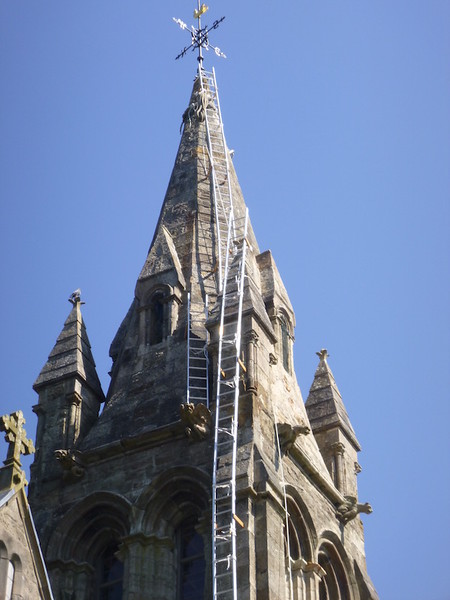 No scaffolding? No problem. Just get a bunch of extension ladders and tie them together.

I hopped the ferry from Tobermory to Kilchoane and continued north through beautiful scenery until I finally arrived at Applecross Pass. Not since Huascaran National Park in Peru have I seen such a stunning road through dramatic landscape. 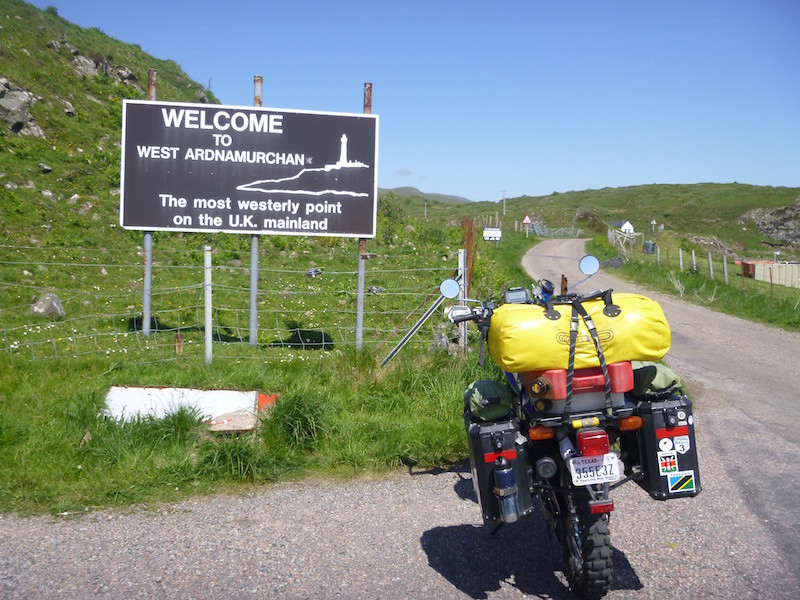 This was going to be my next camp spot, but the gate was locked. 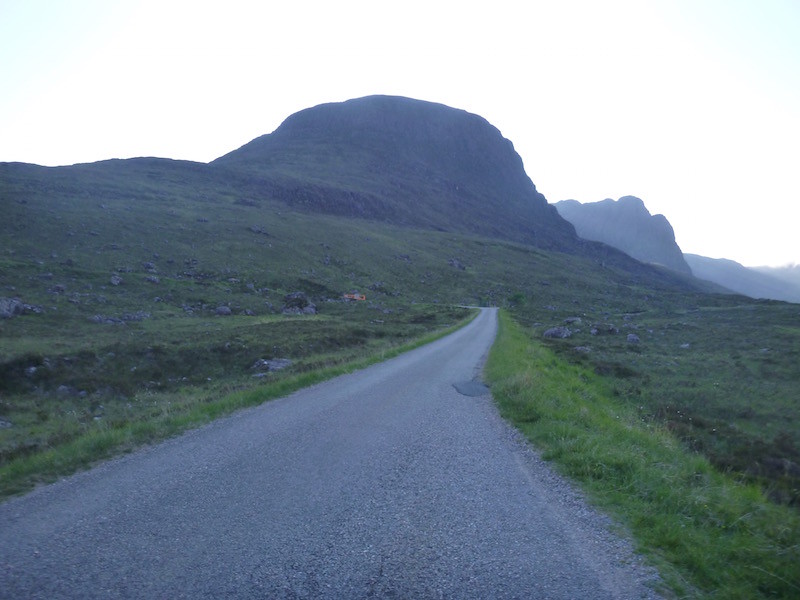 Heading to Applecross. I’ve seen sidewalks in the States wider than the roads here, and these are two-way. 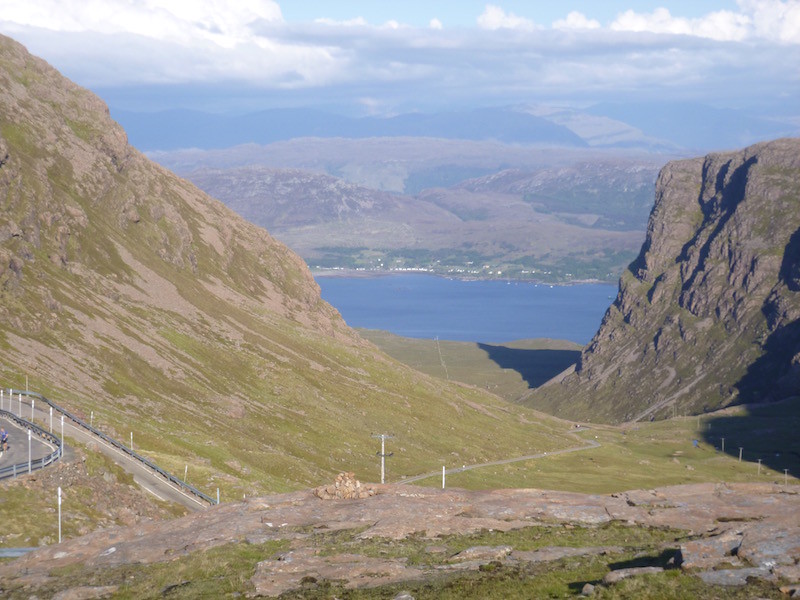 Looking east from the top of the pass.

Looking north from the top of the pass at the clouds pouring over the mountain.

The pass eventually drops down into the small village of Applecross. There was a campground here, and it was full of motorcycles and a gathering of VW combi vans. I decided to spend the night at the campground even though there were several opportunities to wild camp, in order to chat with the other motorcyclists. There were several motorcyclists from England and Scotland. The group camped next to me were from Ireland; another couple I met were from Germany. Several invited me to visit them if or when I came through their towns.

The next morning I took the coastal route — another unbelievable ride — north towards Durness. I hadn’t intended to venture this far north, but the scenery begged me to keep going, and who was I to refuse? 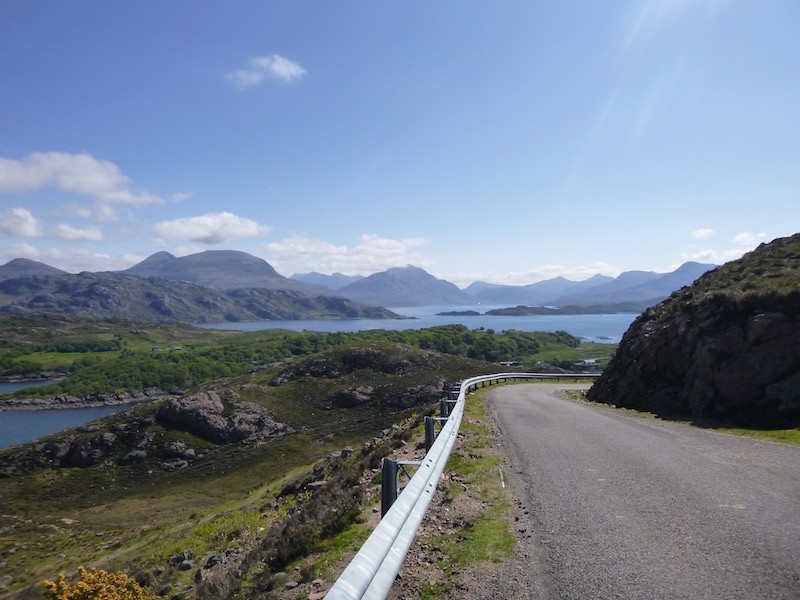 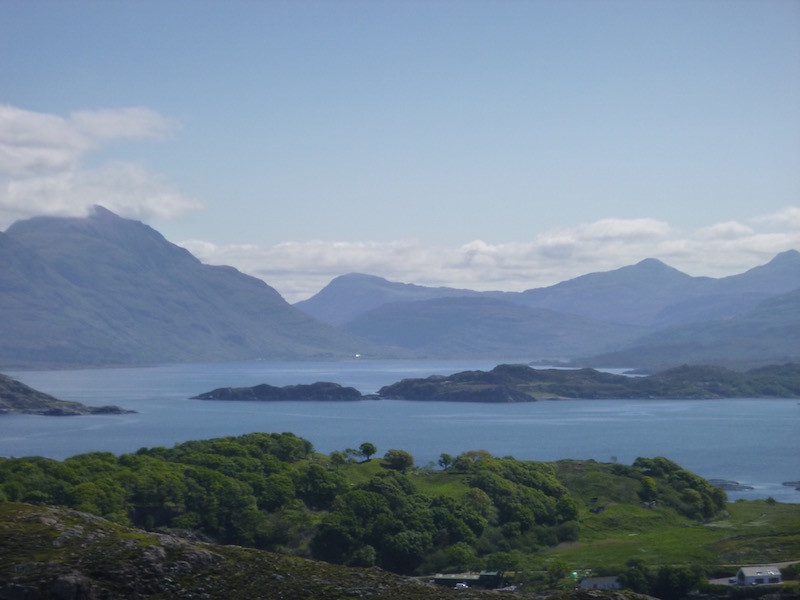 I stopped for a break and was sitting on this bench when soon after these guys from France pulled up. They spoke very little English, but my bike caused them to try. They were touring Scotland before heading to the Isle of Man. 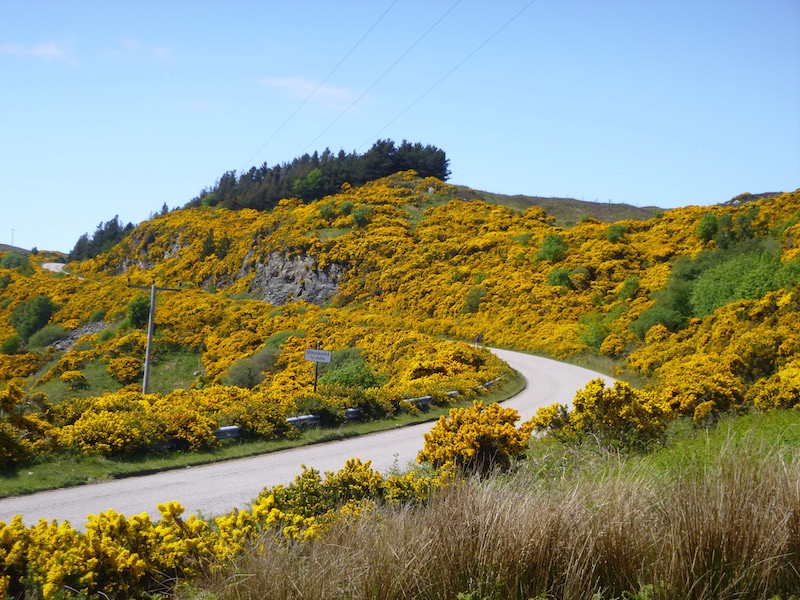 These yellow flowers are everywhere and are extremely fragrant. Incredible smells mixed with incredible scenery.

I’m camped again tonight on the coast overlooking the beach in Durness.  Tomorrow it’s off to John o’Groats, the northern-most point on the Mainland UK.

8 thoughts on “Hop Scotch: Hopping the West Coast of Scotland”