My first day off from Spanish School. I’m feeling guilty for not practicing more. The problem with going to Spanish school where there are so many people who speak english is that it’s too easy to speak english. And my brain is overflowing with new grammar and vocabulary. As my instructor says, “Practica, practica, practica. Mas y mas y mas.”

I started this morning by walking to the Mercado. I’m staying on the east side of Antigua, and the market is on the west side, so the walk is about 15 blocks across and maybe four blocks north.

I love these old places. Look closely, and you’ll see that the door opens to an open courtyard inside. Maybe wasn’t always that way…

There are a lot of churches in Antigua. Most of them are very old. Not all of them have been restored. Here are a couple that I walked past this morning. Look past the front doors/gates, and you’ll see that there isn’t much besides rubble inside. 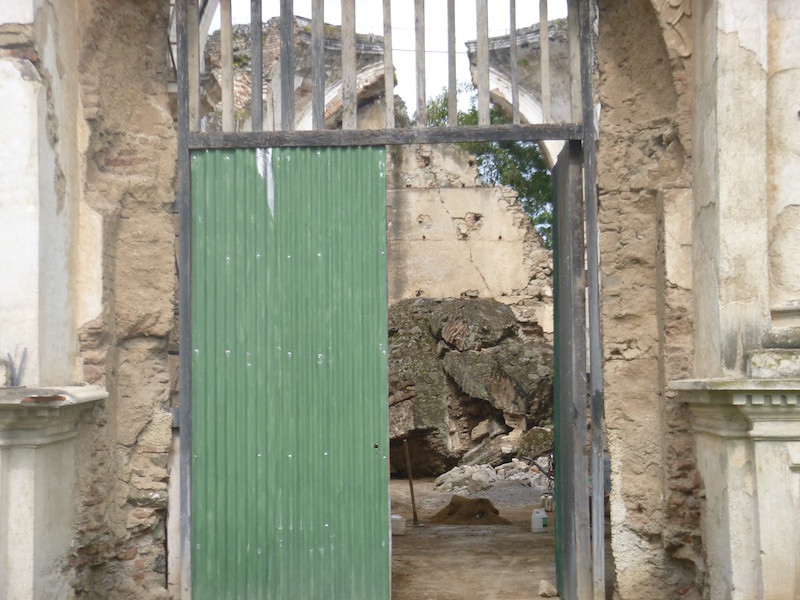 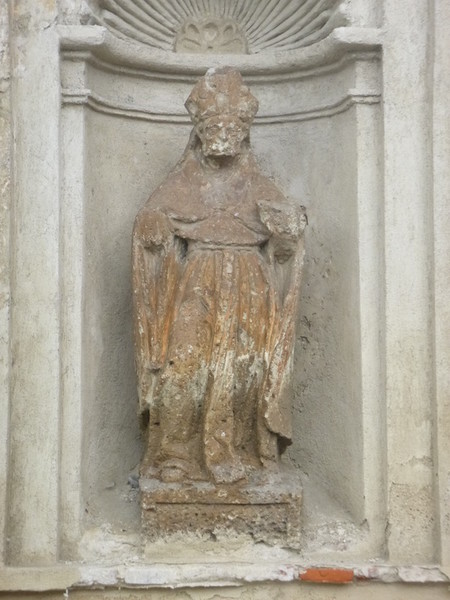 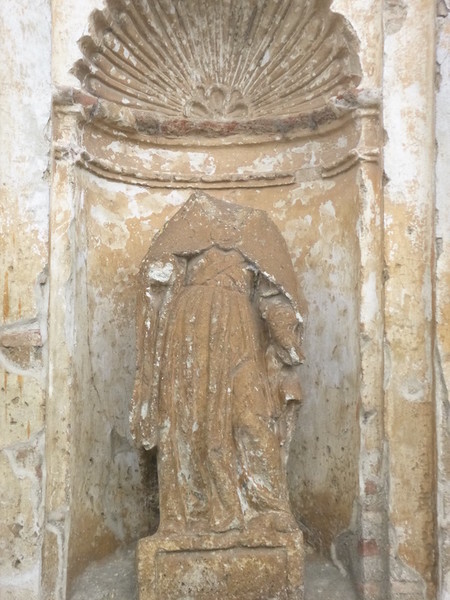 I wonder if the pigeon thinks that looks like a birdhouse in his left hand. 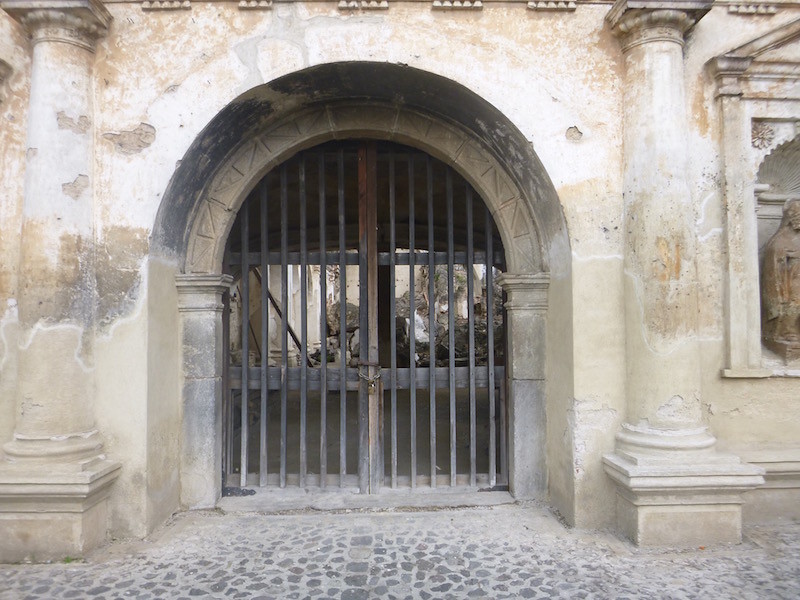 On Thursday there were huge protests held all over Guatemala. Without getting into a lot of politics, the people here are quite upset with the current president, and are demanding that he step down. He refuses to do so. Massive protests and marches took place on Thursday, and a huge Twitter campaign took off all over the country. No matter where you go, you see this hashtag on cars, buildings, t-shirts, television, everywhere:

“I Have No President”

As I was saying, I walked to the mercado this morning:

I walk by this store every day. This dog has his favorite spot, where he just fits, and can watch everything that goes on.

The market here is big, with a lot of fruit and vegetable vendors, and just about anything else you can imagine. 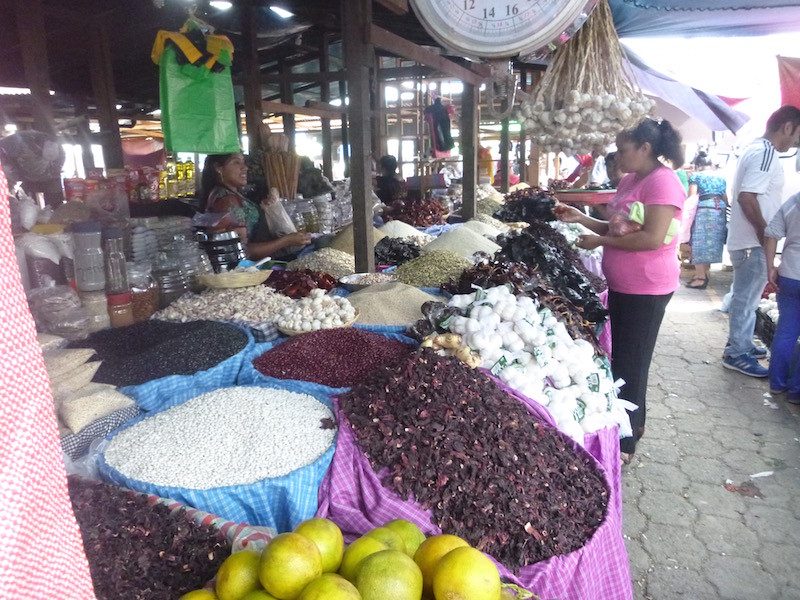 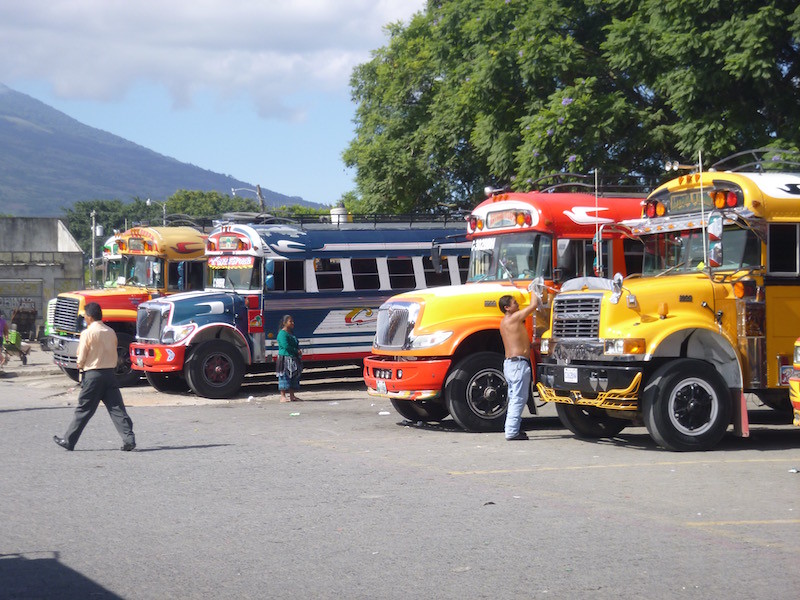 Lots of people ride the chicken buses from outside Antigua to get to the market. These buses are pretty fascinating to look at, and scary to see in the rear view mirror while riding. It may be a giant BlueBird school bus, but the guy driving it thinks it’s a subcompact and will squeeze between anything at speed.

After the market, I jumped on the bike and rode a few miles out of Antigua to a small town called San Miguel Duenas. Just before Duenas is the Valhalla Experimental Station, a macadamia tree farm started 39 years ago by Lawrence “Lorenzo” Gottschamer, a retired Redwood City, California firefighter. I came here mainly because I had heard about their macadamia pancakes, which are incredible: 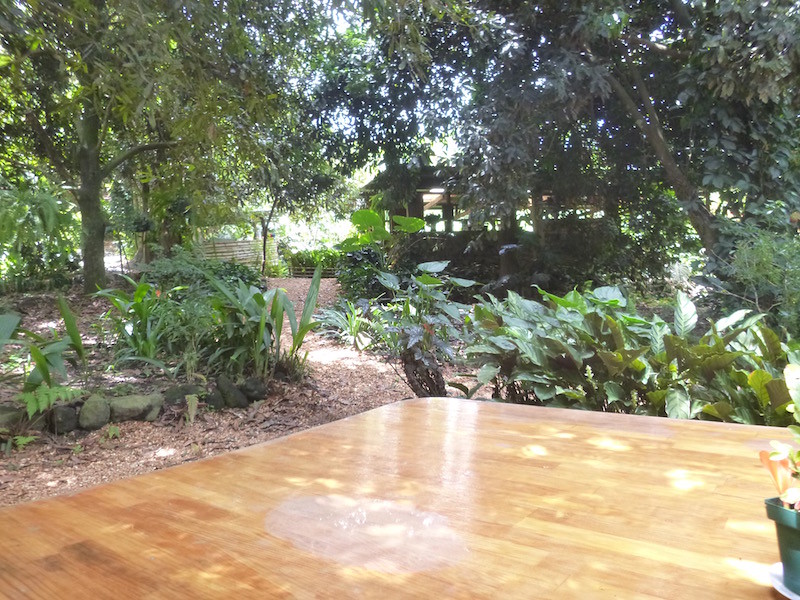 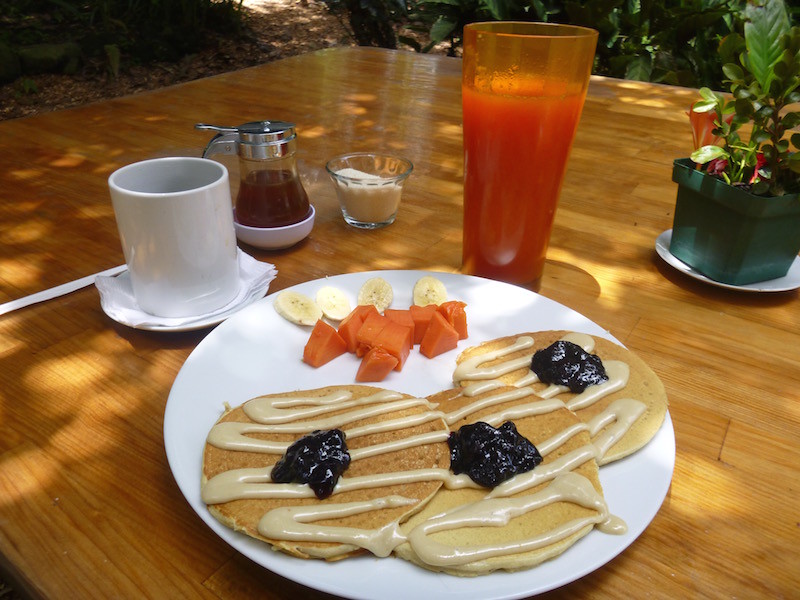 Macadamia nut pancakes, with macadamia nut butter and blueberries, all home grown. Wow, these were good.

What I wasn’t expecting was to have Lorenzo just walk up unexpectedly and sit down with me to chat. I was absolutely blown away by this man. He came here nearly 40 years ago with the vision of growing macadamia trees. He didn’t want to use the grafted trees that are common to Hawaii; he wanted to use natural trees that could naturally adapt to their environment. And he didn’t do this as a commercial for-profit venture. He wanted to show the locals that they could replace the trees they had cut down for firewood with a tree that would produce a usable product for them in four years, and continue to do so for a hundred years, while also helping the environment.

Lorenzo has 300 trees on his 5 acres, and each tree produces about 300 pounds of macadamia nuts annually. That’s 90,000 pounds of nuts each year. With those, he makes butter, cream, soap, lotions, and more, and of course raw nuts. He also has a nursery where they raise trees that they provide free to local communities. So far this year they have donated about 800 trees, and they have another 800 waiting to be donated now. They’re just waiting for some rain so that the trees have a healthy start. Thus far, Valhalla has donated over 200,000 trees to indigenous communities around the area.

I spent about a half hour just talking with Lorenzo over breakfast. At 76 years old, he’s clearly not about to slow down, and he’s an absolute pleasure to spend time with. Within minutes of sitting down with me, he was giving me names and phone numbers of people in the area that I should talk to about places to go and things to see. He offered to let me stay there as long as I wanted. Then he introduced me to Bo, who I kind of got the impression was not only a volunteer or worker, but a bit of a right-hand man when it comes to the macadamia farm. Bo gave me a tour of the farm, and showed me the entire process from gathering the nuts to the final product. 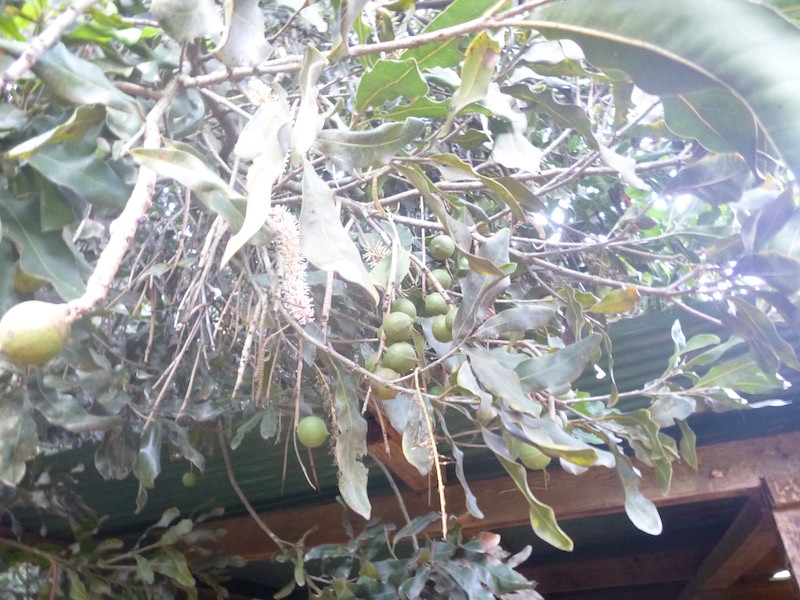 Macadamia nuts on the tree. They aren’t ready to be harvested until they naturally fall to the ground. 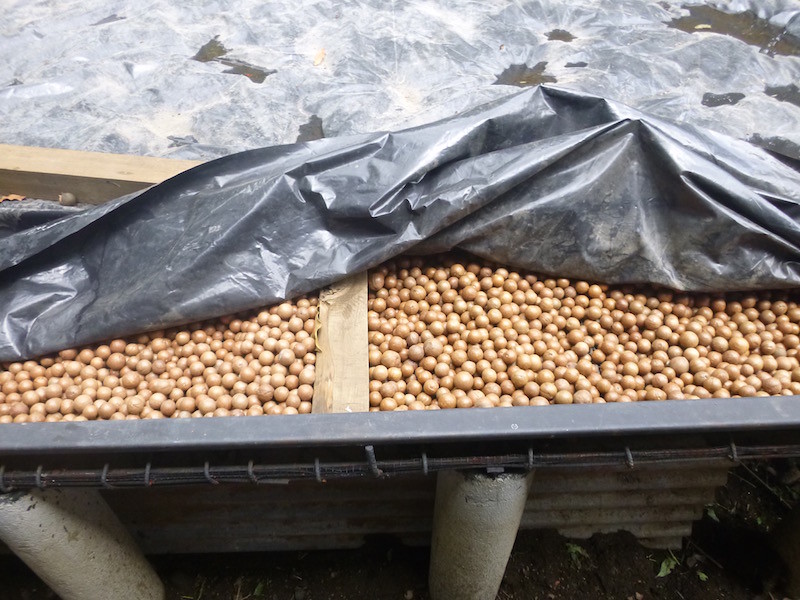 Drying the gathered nuts after the green outer skin has been stripped off. The hard shell you see is under that skin. When dry, you can hear and feel the nut rattle inside. A local guy designed and built all of Valhalla’s processing equipment, and it’s like nothing you’ve ever seen. Simple, straightforward, built of rebar and used truck tires. Anything they need, this local guy dreams up and builds, mostly from scrap. They call him “McGyver”, and he has signed some of his works “McGiver”.

This is Bo’s ninth trip to Guatemala, and his last. Meaning he’s not going back to the U.S. He has now moved to Guatemala permanently. You wouldn’t know it by just walking around with him at the farm, but Bo is an orthopedic surgeon by profession. He’s been coming to Guatemala for years with a team of medical staff to volunteer, performing surgeries to correct club foot and other deformities on local children. Turns out Macadamia farming is just a side hobby.

I am continually surprised and left speechless by the people I meet and their generosity. 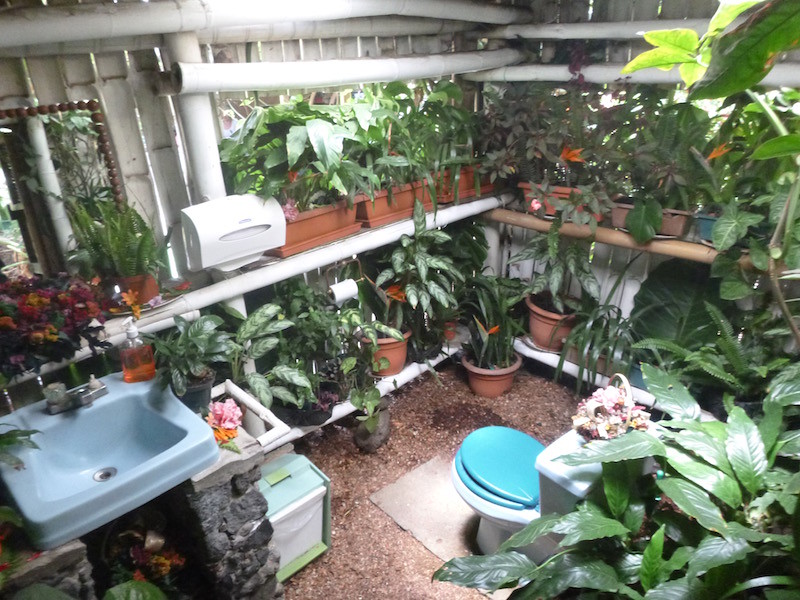 Restroom at Valhalla. Or as Bo put it, “the most photographed restroom in Guatemala”.

After breakfast, I rode around the Duenas area a bit, then headed back through Ciudad Vieja to Antigua and my “home”.  As I pulled up, I was greeted by Don Marco, as I am every day when I roll my bike out of the La Union School to park it on the street for the day.

Don Marco is another of those incredibly nice, genuine people that I keep running into in Guatemala. He speaks little or no english, but he is an absolute pleasure to spend a few minutes chatting with each morning. I hope my Spanish improves enough over the next 10 days or so that I can spend more time talking with Marco, and learning more about him. This morning he was telling me about the three volcanoes that surround Antigua — Volcan de Agua, Volcan de Fuego and Vocan Pacaya, and suggested that I go hike Volcan Pacaya, but not the other two due to thievery problems in those areas. Not sure if I’ll make it there this weekend or next, but it’s on my list.

4 thoughts on “In and Around Antigua”