A quick update to finish up Finland before launching into Estonia:

We spent several days house-sitting in Espoo (pronounced Es-Bo), a suburb of Helsinki, while I did some maintenance on the bike and we caught up on paperwork at home. We had a great little Ragdoll kitten named Luna who was a lot of fun, and a nice apartment next to a new shopping mall, with an easy bus/train connection to downtown Helsinki for a day of sight-seeing.

Taking a break now and then to hang out with some great pets and relax in a nice home helps us recharge for more travel.

Our first stop in Helsinki was the Temppeliaukion Church. The church is built directly into solid rock, so it ends up being mostly below ground. This crowd (mostly cruise ship tourists) was waiting to enter the church when we arrived. Which immediately made it a place I didn’t want to go. If you’ve been following this blog for long, you’ll recall that I had a rule in my former round-the-world trip that if a town had a sushi bar, it was too big for me to visit. I’ve totally blown that rule multiple times already this year.

Next up was the Helsinki Cathedral, built in the mid-1800s as a tribute to Tsar Nicholas I of Russia.

The Cathedral overlooks Senate Square, which holds the statue of the Grand Duke of Finland, Alexander II.

And finally, the Uspenski Cathedral (I’m seeing a trend here…), the center of the Finnish Orthodox faith.

After saying goodbye to Luna, we caught the Viking ferry out of Helsinki for Tallinn, Estonia.

Sitting in line to board the ferry. You can see it in the background: it’s that cruise ship-sized thing.

On the ferry we met a couple from Lappeenranta, Finland on a BMW GS, who were headed into Latvia on a week-long trip. They gave us a couple of good suggestions on places to stay as we headed south. But first we had a couple of days planned in Tallinn. 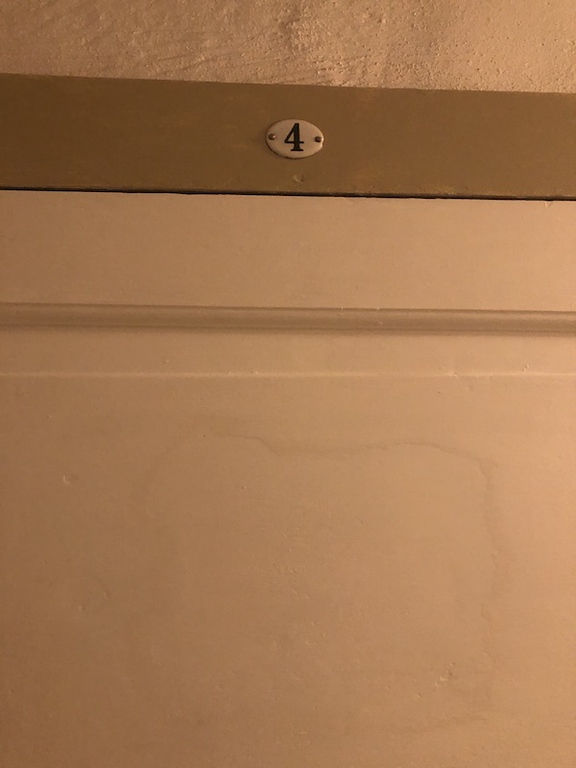 This was kind of interesting: we stayed in Apartment 4…

Next door was Apartment 9. Or Apartment 3/1. Not sure.

We walked the short distance to Old Town, and took in the sights, sounds, and some food. It didn’t take long for me to really like Tallinn.

Tallinn has a nice, lively vibe to it, with lots of outdoor cafes and restaurants and a lot of history. And it’s a very clean place as well.

We aren’t vegans, or vegetarians, but the menu at this place just sounded too good not to try. And it was.

Beetroot ravioli with cashew cream cheese and basil pesto. I could’ve eaten a dozen of these.

After dinner we wandered around the corner to DM Baar. Opened in 1998, this place is a monument to the band Depeche Mode. They play only Depeche Mode music and videos full time. Pretty amazing: 24 years strong and still going, based on one band’s music. Not many (if any) places can say that. 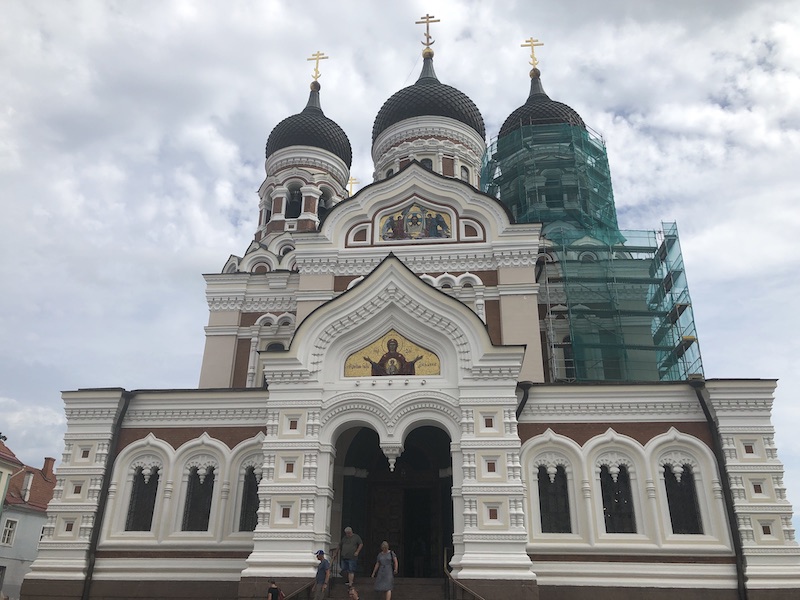 We continued our walking tour the next morning, with (what else?) a visit to the Alexander Nevsky Cathedral, Tallinn’s largest Orthodox cupola church.

We passed this little guy on his rounds. This is a robot delivery vehicle. It delivers food, goods, etc right to your door. Seen these in the US lately? We may be walking through thousand-year-old neighborhoods, but there’s nothing old about the tech here.

We passed the Russian Embassy, which was barricaded and had Ukraine flags and lots of anti-Russia and anti-Putin signage. The support for Ukraine and the disgust with Putin is more visible here than anywhere we have been so far, which is understandable, as a former Soviet Socialist Republic that shares a border with Russia. (Note: we’ve seen more of this sentiment since, and will share more in coming posts.)

This was one of the more direct comments, on a signboard in front of a restaurant in Old Town.

Not far from the Russian Embassy is the House of the Blackheads. This organization was founded the 14th century, and consisted of single merchants and ship owners.

And then we rounded the corner, and suddenly we were in Texas. It was more than a little weird to say the least. The Texas Cantina has been operating since 1998, and Herbert, the owner, loves all things Texas. He was just there in April, and goes about once a year. The story we were told was that he came to Texas to visit, and while at a dive bar/restaurant one day he decided that if it could work in Texas, Texas could work in Tallinn. And it has.

The menu is mostly TexMex, with some Dr Pepper and Tito’s Vodka thrown in. This was my burrito, with sauces in the colors of the Mexican flag.

Leaving Tallinn, we headed to the island of Saaremaa for a night of camping. Saaremaa is a large (1,000 square mile) island off the coast of Estonia. It’s also home to the Teesu Nature Reserve.

At the Teesu Nature Reserve, they’ve built three or four of these campsites on Tagalaht Bay. The sites are free and first-come, which wasn’t a problem, as there was only one site taken when we arrived. Each site has a covered table and a wood-burning grill. And a beautiful view from the shore looking out across the bay to the Baltic Sea.

The sites are spaced a good distance apart, allowing for peace and quiet.

There is one pit toilet, and it has features I’ve never seen before: for one, it has astro-turf. And second, it has a styrofoam toilet seat and lid. Doesn’t seem like it would be very durable, but it’s gotta be cheap. This one looked brand new. Then again, the entire place looked brand new. Amazingly nice for the price of free.

And before heading off to Latvia, I’ll leave you with this:

Do the owners of these VW mini-vans just tell people they drive Caddys? You can go from Soccer Mom to Socialite with the same vehicle…as long as nobody sees it.