As we prepared to leave Saaremaa, we knew we had to backtrack more than 60 miles to get off the island and head south again. Looking at the map, it was just a stone’s throw to Ventspils, Latvia from Kuressaare, Saaremaa, if only there was a ferry. I did some research, and it turns out that there used to be a ferry, but hadn’t been for some time. Looking at the map, there was a ferry between Ventspils and Sweden; Ventspils and Germany; and Ventspils and St Petersburg, Russia. But not Saaremaa. Diana even joked that we could end up getting on the wrong ferry and end up in St Petersburg.

So we rode the long way back and south to Riga, Latvia, and arrived at Two Wheels Hotel, one of the places the Finnish couple on the ferry from Helsinki had suggested.

Unfortunately the hotel was sold out, but as I continued to enquire, the woman at the front desk, who was happy to see people on a motorcycle arrive instead of the more recent car crowd (after all, the place is called Two Wheels Hotel), came up with an idea.

“Well”, she said, “there is a room. but it has no bed. It’s a common room for the guests upstairs, but you could sleep there. Of course you’ll have to use the toilets and shower in the downstairs hall. Follow me, I’ll show it to you.”

And she led us upstairs to the room.

“We’ll take it”, I said. We would end up paying close to that to camp, and it was supposed to rain over the next day or two. Not having to pack up a wet tent was becoming worth a price to me. We had done it way too many times already this trip.

“Are you sure?” She seemed surprised that anyone would want a room with two small love seats, a table with three chairs, and no bed.

“Yes. We have our camping gear. We can sleep on the floor.”

She was so surprised and almost apologetic at our offer to sleep on the floor that she brought us pillows, sheets, blankets, towels, bottles of water, and more.

As she was delivering the towels, who should step out of the room across the hall but Matti and Heli, the couple from the ferry.

Planning our next moves with Matti and Heli from Finland. They were a great source of info for this part of the world.

We ended up in St Petersburg after all! The rooms are all named after places the owner has been. The owner of the hotel, Martins Sils, is a motorcycle traveler himself, and is also responsible for having designed the Latvian portions of the Trans Euro Trail or TET.

Pretty sure this was supposed to say “Staff Only”. Oh well, it was full of stuff. Close enough. 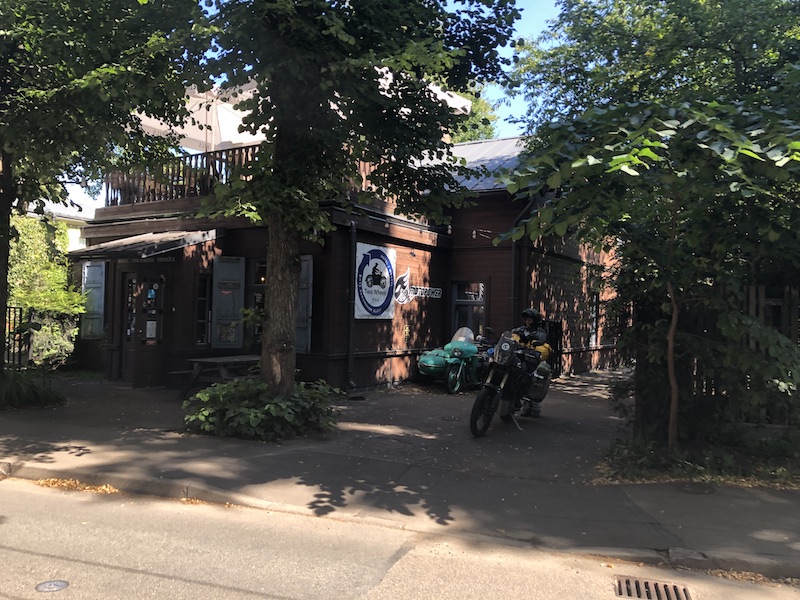 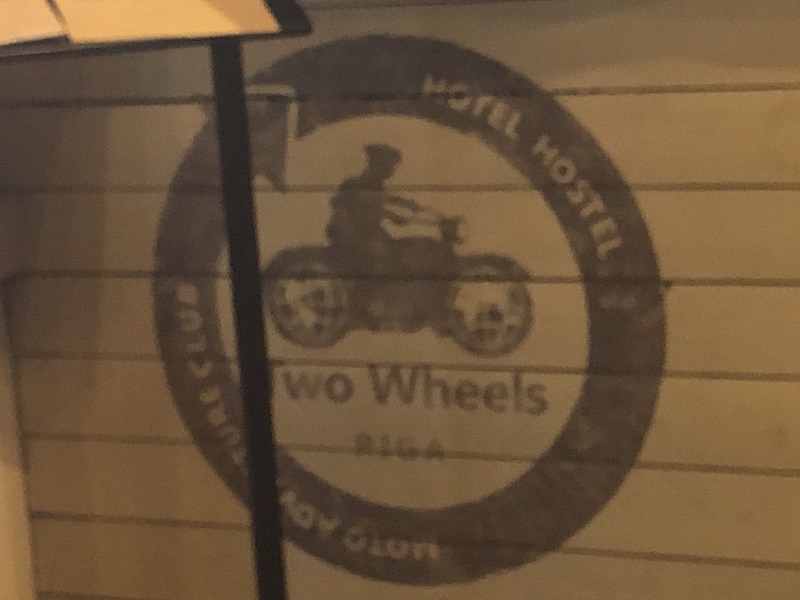 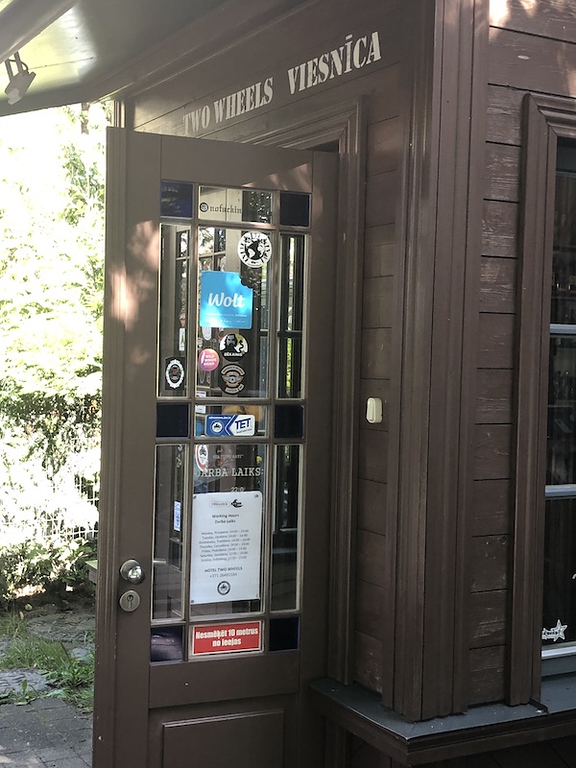 As usual, we left our mark on the hotel (upper right corner of the door).

In the morning, Matti and Heli left on their BMW headed north toward Pärnu, and we caught the tram into Riga and walked the town.

Riga is a great town to just walk around and admire the architecture.

The House of the Blackheads in Riga. Impressive building. 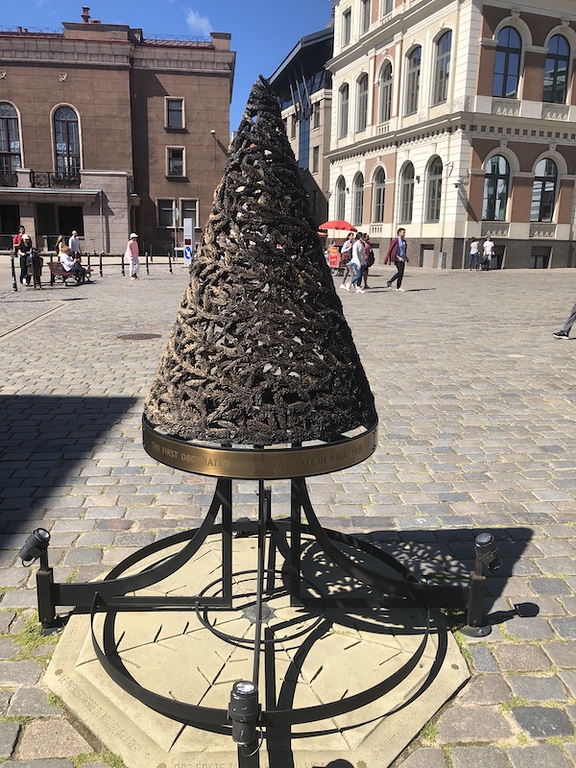 The Freedom Monument. This was built to honor the soldiers who died during the Latvian War of Independence in 1918-1920. Amazingly, it survived threats of Soviet demolition throughout the Soviet occupation and annexation, and continued to be a social inspiration for Latvians, who eventually again gained independence in 1990.

Beautiful park next to the Freedom Monument.

Albert Street. Riga has the highest concentration of Art Nouveau architecture of anywhere in the world. 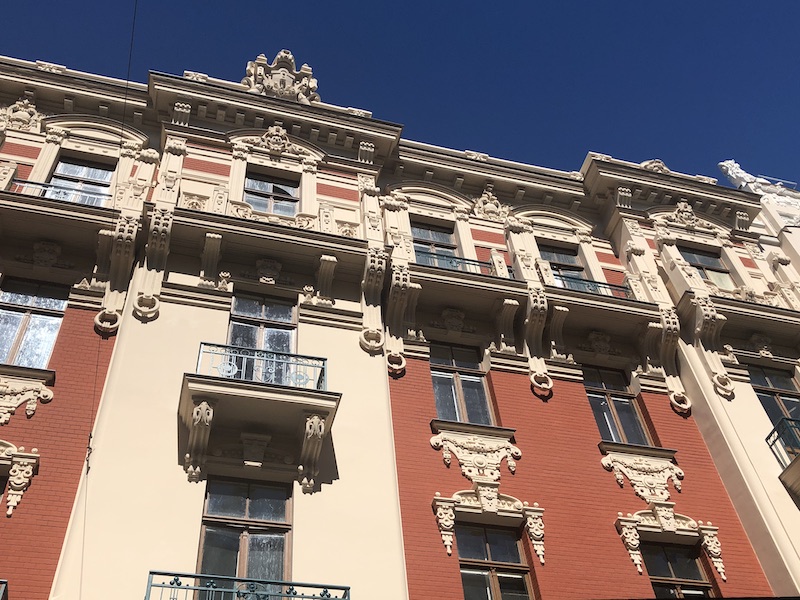 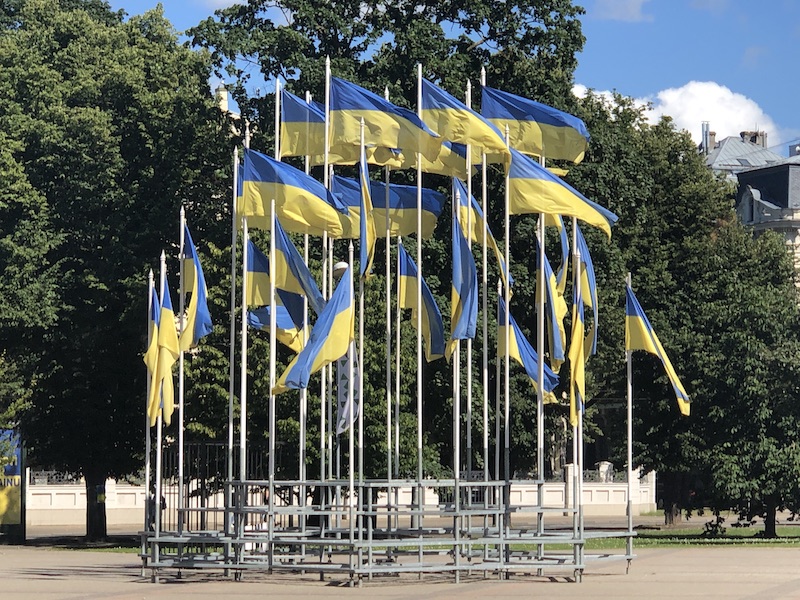 In front of the library. 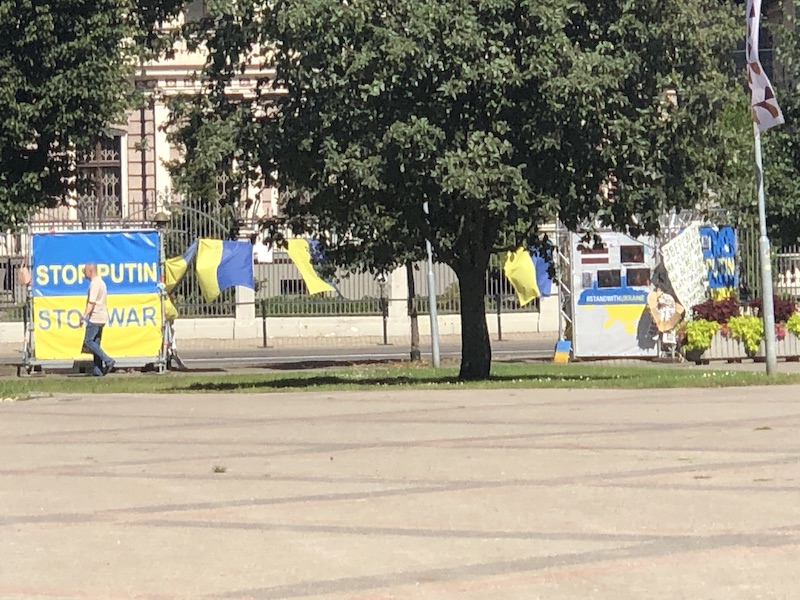 The Cat House. Note the tops of the two turrets. 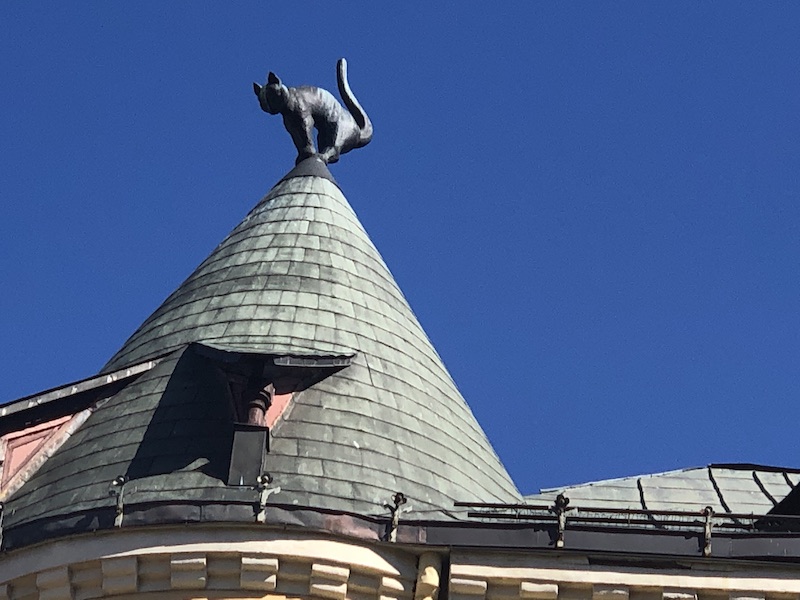 The legend is that the owner of the building had the two angry cats with their tails raised placed atop the building with their back sides facing across the street at the Great Guild, in retribution for the tradesman group denying him entrance into the Guild. After a lawsuit was initiated, the cats were later turned facing the building. 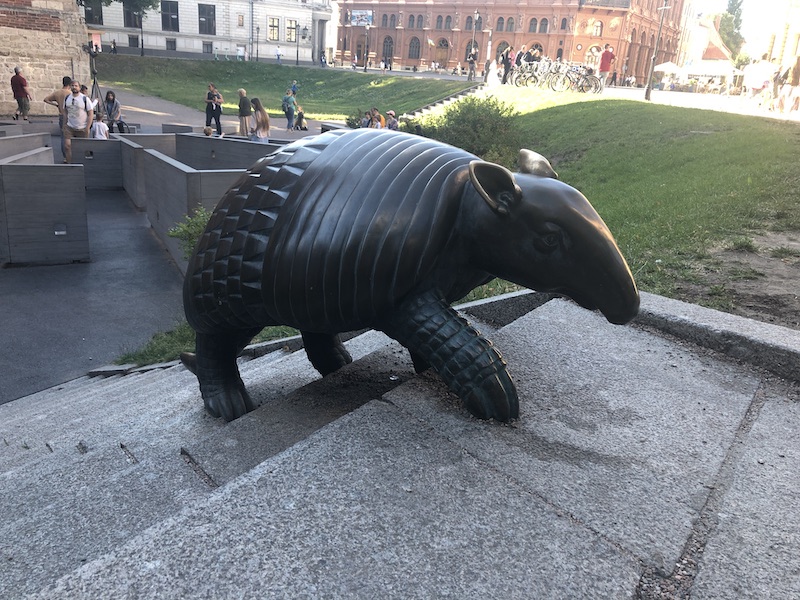 I had no idea they had armadillos in Latvia, much less giant ones.

When we returned to the Two Wheels hotel, it had been “invaded” by about ten guys on sport bikes, all bearing Finland license plates, so they were obviously doing some long distance touring on these bikes, which is always impressive to me. Then I noticed a sticker on one of the bikes, with a picture of a Honda Gold Wing with a slash through it, and the slogan “No F*^!ing Touring”. I had to laugh. These guys were hardcore. 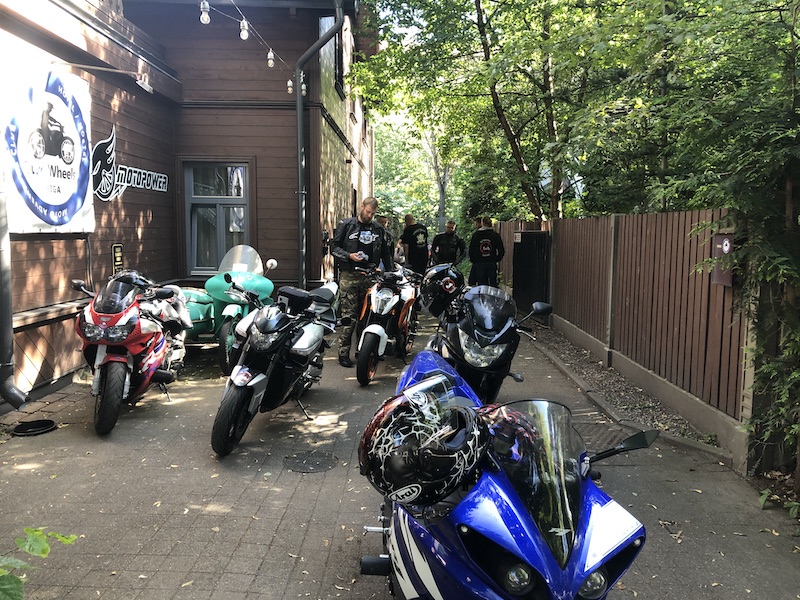 A bit later, I walked down to my bike and they were checking out the Texas license plate. We got to talking, and I told them they were my heroes for riding supersport bikes long distance. They thought we were their heroes for riding as far as we had. We had a great time swapping some stories, I handed out some of our 2RideTheGlobe stickers, and they put one of their NFT stickers on the Tenere’s panniers. 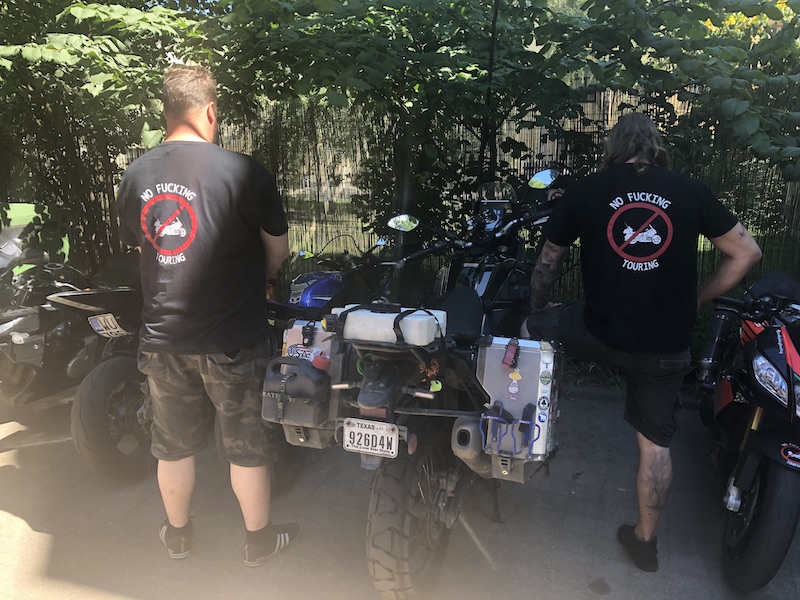 NSFW…NFT…whatever! These guys were a riot. They’ve been getting together every year for thirteen years for a weeklong ride. That’s pretty cool.

Later that night, I decided that we would stay one more day in Riga. We had originally planned to ride just about fifty miles south the next morning and camp, but the weather forecast wasn’t looking good, and we had a roof here, so I paid another thirty bucks and we slept in.

While sifting through my emails the next day, a new email popped up. A former colleague and friend from Yamaha and her husband had both retired in 2010, and they were traveling around Europe. We had emailed back and forth a couple of times in the past three months, but we were always in different parts of Europe, and it didn’t look like we would cross paths. Today she reached out to ask about a place we stayed at in Dubrovnik, Croatia, and to see where we were; she said they were in Riga, Latvia.

Wow. Random. What are the chances? Within a few hours, we were having dinner in Old Town. I hadn’t seen Madeleine or Scott in eight years, and they had never met Diana. It was great to catch up.

Totally random meet-up thousands of miles from home. Hard to believe, but great to see them again.

It will be hard to beat the story of bumping into an old friend in Riga, but we still have time to try to best that one.

One thought on “Into the Baltics II: Latvia”