On Thursday morning, it’s finally time to hit the road. I’ve decided that as much as I wanted to head north and visit a couple more beaches, I’m ready for a break from the heat and humidity of the coast. I ride out of Cartagena and head towards Medellin, but after about an hour I turn left and head further inland toward the mountains. The road is nothing special, and the potholes increase. I’m headed for a small town called Mompox, on the Brazo de Mompos River.

River bridge on Highway 80 at Plato, headed towards the turnoff to Mompox…I think.

For an hour, my GPS continually tells me to make a U-turn and go back to the Medellin highway. But the Maps with Me app I use on my phone says there is a way across the river and that I can get there from here. I’m not sure, but I’m determined to find out.

At La Gloria I turn south again and suddenly, inexplicably, the two lane road is nicely paved and the scenery is green pastures. After a few miles, I pass eight policemen on four motorcycles (they ride two-up here) headed the other direction. For the first time, I notice there are orange poles every couple of miles with blue “SOS” letters painted on them, the Colombian equivalent of a CHP Emergency Call Box. This seems very odd out here in the middle of nowhere, on a road that my GPS says is a dead end. I’ve been watching the Netflix series “Narcos”, about the Pablo Escobar Colombia of the 1980s, and this road and the fincas along it suddenly remind me of the show. I’m sure my imagination is running wild. Today’s Colombia is much different. But I can’t explain the call boxes.

I ride into the little town of Santa Ana at the end of the road, and my Garmin tells me just that: this is the end of the road. I stop and ask a moto-taxi driver if there is a bridge or a ferry to Mompox, and he tells me to go another two blocks and turn left. When I do, I am confronted by a giant, gleaming new concrete bridge over the river. But it’s not quite finished. For now, the tiny wooden ferry under the bridge is still in operation. I pay the equivalent of sixty cents in Colombian Pesos and a few minutes later I’m headed the last fifteen miles down the dirt road to Mompox. 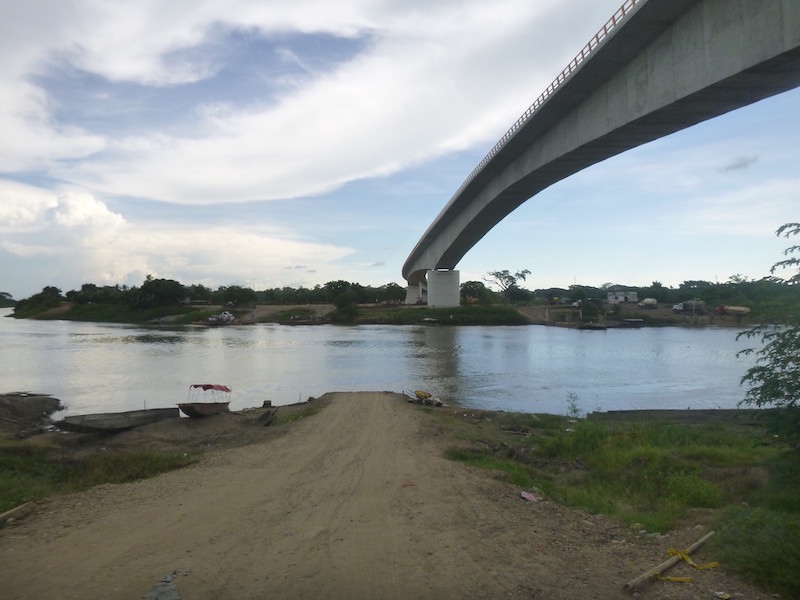 A bit hard to see, but this is looking across at the ferry. Wood planks across three narrow hulls.

Mompox isn’t a tourist destination, but as I ride through town I spot a couple of hotels. The Hotel San Francisco looks nice enough, and it looks like I can probably get my motorcycle into the lobby, so I stop and ask. The guy at the desk is extremely nice, and asks another guest to move his car slightly so I can hop the curb and climb the step into the lobby. For thirteen dollars, I have a clean room with air conditioning, a ceiling fan, TV, and a clean shower. And always important, secure indoor parking.

After a shower I decide to walk into town to look for dinner. Instead, dinner finds me. As I step out of the hotel, there is a street vendor at the curb selling patacones, a delicious fried mashed plantain with your choice of meat with veggies. Most likely the best eighty cent dinner I’ve ever had.

Tomorrow is a long ride down a dirt road before joining the highway south to Bucaramanga.

One thought on “Is This The Road To Mompox Or Not?”