Highway 25 south of Cali goes through a couple of severe climate changes. Near Cali the landscape is dominated by sugar cane fields. Several times along the road I passed orange warning signs: “Cruce de Trena de Cana” (Cane Train Crossing). If you can imagine a huge container trailer that looks like a shipping container on steroids — twice as high at least with an open top — and giant off-road tractor tires. Now imagine five or six of these linked together and being pulled by an 18-wheeler tractor truck. The whole thing is probably 200 feet long.

Beyond Cali I dropped in elevation considerably, and lost the lush foliage, replaced by low scrub and cactus. Still very green in many places, but definitely semi-arid desert. For a while I rode along a ridge above a large river, and couldn’t help thinking how much it looked like Big Bend in Texas.

I was almost convinced that this is what the rest of Colombia and Ecuador (and points south) were going to look like, when suddenly I began climbing again and the scenery returned to taller trees and more plants.

I had intended to stop just north of Pasto but had trouble finding the hostel where I wanted to stay. After three attempts, I decided I had enough daylight left to head a little further south. And while I am rather stubborn, I am slowly learning that I have to stop earlier. Once souh of Pasto, there is very little if any places to stay until Ipiales.

The sun set a half hour before I reached Ipiales. It was high elevation, and cold. I had the heated grips on high for probably an hour, and was too stubborn to stop in the dark and zip up the vents of my jacket, so I was shivering. I had a hotel in mind near Ipiales, but after 30 minutes of searching unsuccessfully I gave up on that one too. At this point it was full dark and I was wandering an unknown city and cold. I eventually went back near where I came into town and pulled into the Hotel Metropol to ask if they knew where I might find a hotel with secure parking for my motorcycle. By pure luck, the had a gated parking lot. A room with private bath and TV at this funky old hotel came out to $6.90  a night. I ended up having dinner in the hotel restaurant as well: a roasted chicken leg, rice, beans, plantains, and salad for $1.38. The hotel is clean and secure and I recommend it, with the caveat that it can be a bit loud until around 10pm due to the fact that the entire hotel is terrazo floors, so sounds really echo.

You may be wondering how someone can ride all the way through Colombia and manage to miss the three largest and most popular tourist destinations: Bogota, Medellin, and Cali. Well, I’m not a big-city guy. I’m sure there are amazing things to be seen there, and perhaps some day I will return to see them (I will definitely return to Colombia). But the traffic in these cities and the lack of secure parking for my fully loaded bike keeps me away. I’d rather see the mountains, the small towns, and the rural people.

The next morning I learned two things right away: first, my little 250 cannot maintain a positive charging rate with the heated grips at 100%, the GPS and the phone charger all running simultaneously for more than an hour. The battery was nearly flat. I was able to push it off, and about three blocks later I learned how close I was to running out of gas the night before, when I ran out of gas. Of course I had my spare can on the back rack, so it was just a matter of filling up and heading to the gas station a half mile away.

First stop this morning: the Santuario de Las Lajas. This incredible cathedral is built in a canyon, and rises 330 feet high.

Looking down into the canyon at the Santuario de Las Lajas 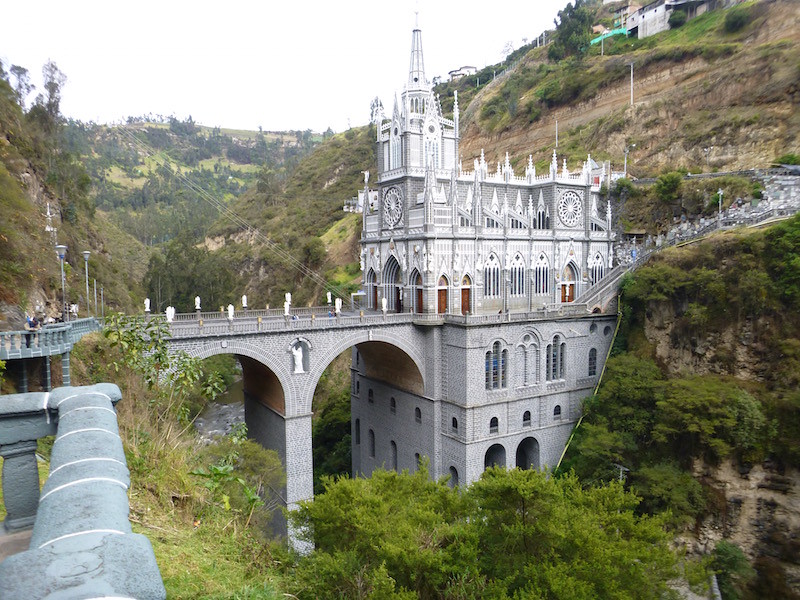 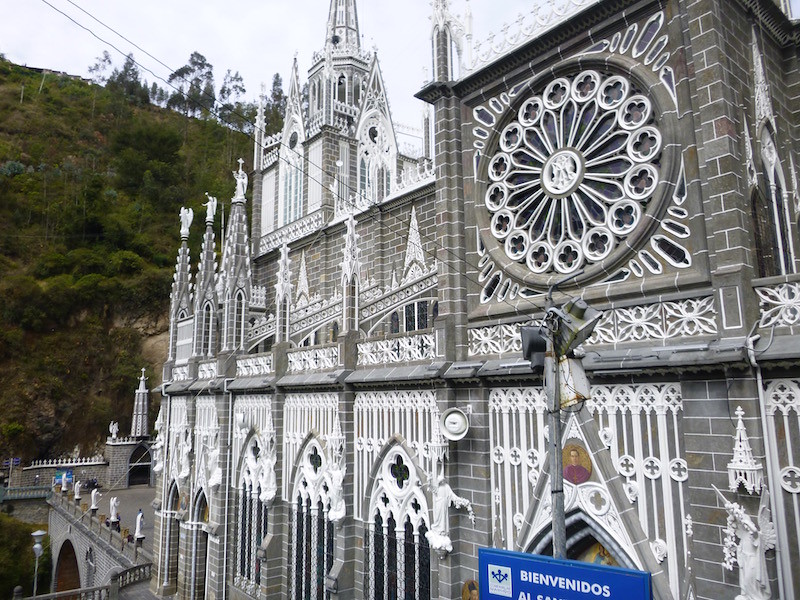 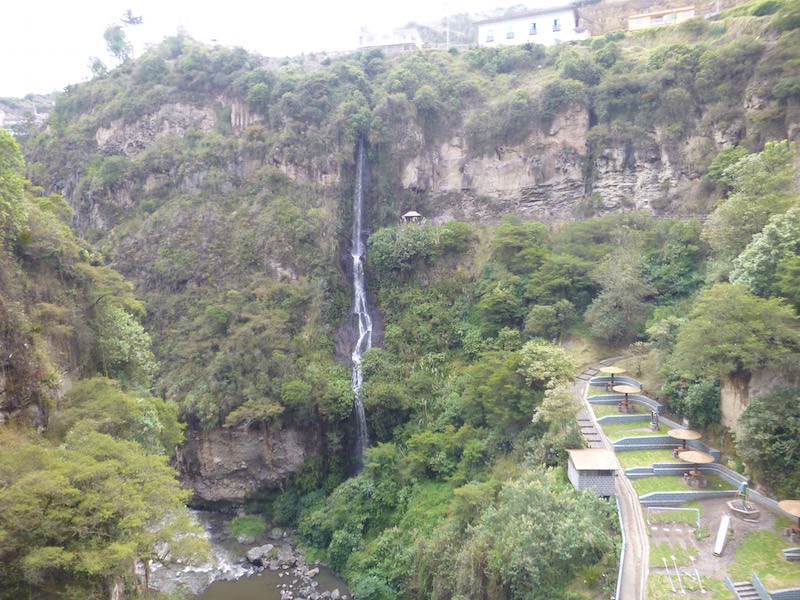 Waterfall from the Sanctuary

At the sanctuary I met six people on three bikes with Mexico registration. Turns out they were three couples from Austria, Ireland and Australia who all work with the same organization in Mexico. The Austrian couple was moving to Bolivia, so they all decided to ride to Bolivia together. I met them again not long after at the Ecuador border crossing.

Ecuador is country number ten for me on this trip. The border crossing between Colombia and Ecuador was the easiest since Mexico. No “helpers” hounding me; just a guy that changed my Colombian pesos to US dollars (the national currency of Ecuador) and offered without expectation of pay to show me where immigration and aduana were located. Aside from having to stand in line for a while due to the large number of people crossing the border, it couldn’t have been easier on the Colombian side or the Ecuadorian side. I was able to park the bike within sight of each office and even had an elderly gentleman offer to watch it on the Ecuadorian side, for which I gave him a couple of dollars.

As soon as I left the border it began to rain and again got cold. This time I stopped and zipped up my vents and turned the heated grips all the way up, remembering to shut them off ten minutes or so before arriving at my destination.

It was a short ride to Ibarra where I am camped for at least one night and probably two. I spent the afternoon changing out the rear brake pads, and adjusting, cleaning and lubing the chain (first time this trip that I have had to adjust the little 428 chain; lack of horsepower has treated it well). I will need to replace the front brake pads soon but I have a fork seal leaking on that side and I don’t have the tools to change it, so will have to get the seal changed or borrow some tools in the next few days. 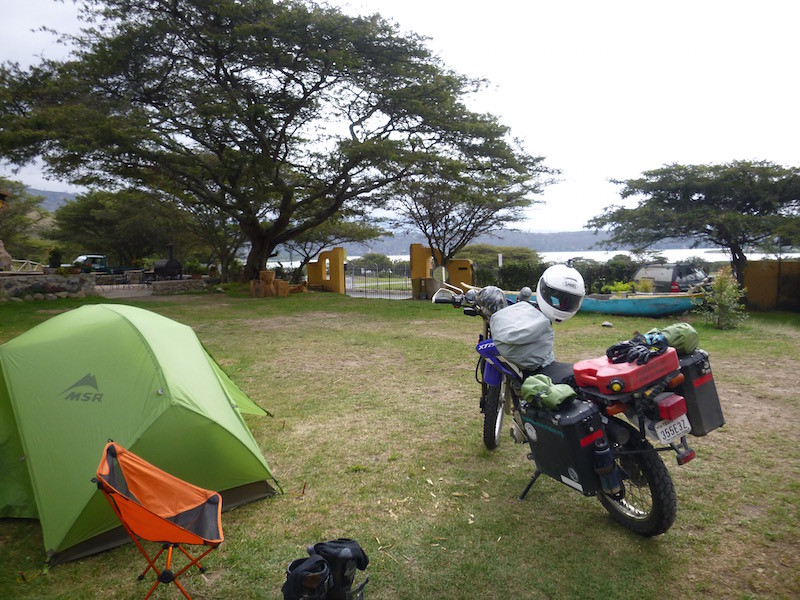 Home for the next night or two: Finca Sommerwind, on Laguna de Yahuarcocha.