We left Aylesbury, England at the end of our house sit there, on a mad rush for Spain. Once again, this isn’t the way we like to travel — too many highways, too many daily miles, not enough stopping to chat with the locals — but we had limitations placed on us. The Schengen Rule says that non-EU citizens can only spend 90 days out of every 180 consecutive days in the currently 26 Schengen countries. We re-entered at France on September 3rd, which was Day 79 of 90 for us. That left us nine days to make the 1500 mile trek to Malaga, Spain, store the bike and get out again, with two days left for our overnight in Frankfurt, Germany on the way home at the end of this month.

Before leaving England, we discovered that a bolt had come loose and one of the “latches” that secure our removable metal boxes had fallen off and disappeared. This is what the original part looks like. You can see the aluminum tab on the right, with a bolt that goes through to the inside of the pannier, where a threaded knob tightens down and clamps everything in place. An acorn jam nut then sits against the knob inside the box.

After a day or so of searching around for a suitable piece of metal to fabricate a new tab, I realized that the answer came from within: within the pannier. My tire levers are just about the same width as the original latch. Cutting a short piece of the end left a shorter tire tool but still usable.

Not much different from the original. It’ll do.
,em>

If I was a conspiracy theorist, the sky this morning would have scared me. On our way through France we spent one night at a really nice municipal campground in Gacé. The next morning the sky was covered in contrails. 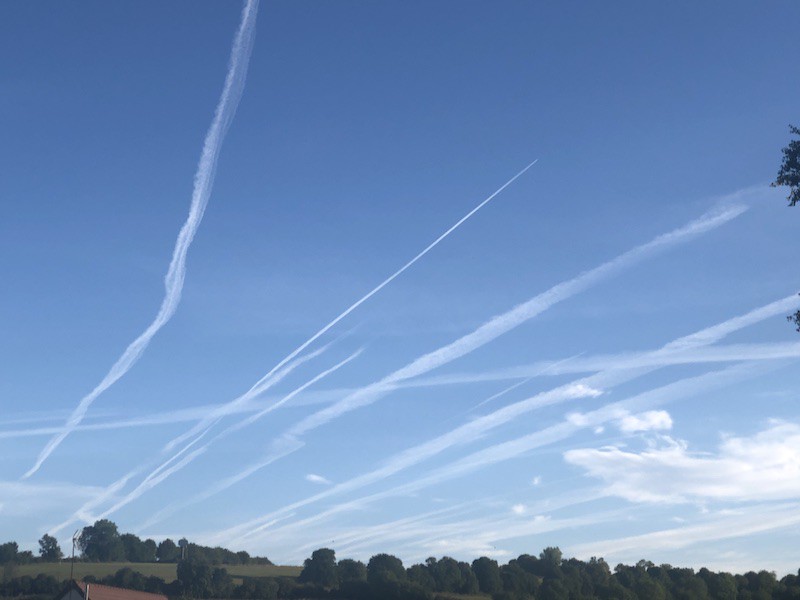 Tembleque, Spain. Many of these small towns looked like something from a horror film; no people anywhere.

Our first night in Spain had me re-thinking the country. We pulled off the road and into Tembleque, a small town of just under two thousand people (and shrinking), in the province of Toledo. The town is the typical La Mancha style: all of the buildings are white, painted in a lime whitewash. There were no people to be seen anywhere, but we found a hotel. No cars, no people, but a hotel, with an open front door. I parked and walked in and found the host behind the counter.

Normally this would be the point where I turned around and walked out. But it was hot and we had ridden nearly five hundred miles today. Way, way more than we should ever do in a day. So I took the room sight unseen. It turned out to be a nice room, with air conditioning. But the encounter left a bad taste. We hadn’t experienced anything like this in the last four-plus months.

We walked into town to one of only two restaurants that were open, and sat down, but after twenty minutes without finding anyone to place an order we left and walked to the other restaurant. The bartender there was much more friendly, even though he spoke no english, and we were able to at least order a couple of sandwiches.

We made it to Malaga from England in four long days, which gave us another four days to just chill before catching an early morning flight back to London. We stayed in an apartment one block from the beach, and our host Pedro was the extreme opposite of the hotel clerk in Tembleque. We’ve already made plans to stay at Pedro’s place again when we return to Malaga to pick the bike up.

Walking along the beach, we passed by this restaurant with an outdoor grill, where they were preparing espeto, a fish common to this area, on skewers.

The Schengen Rule doesn’t say the motorcycle can only spend 90 days of each 180 in the 26 Schengen countries. Therefore, as of this morning, the bike has been tucked away in Spain for a little break, while we fly back to the UK to do a few more house sits before flying home. Why not just fly home? Well, it’s complicated. The easy answer is that we have an agreement with our house sitter through September 25th, so we don’t really have a home until then. Staying in England for a few weeks isn’t really much more expensive than being at home when you don’t have any lodging expense and can eat in rather than going out to eat all the time.

This isn’t the end of the ride. Quite the opposite actually. It’s simply a short break to re-group and head off in a different direction for the rest of the year. There’s a lot more world to explore and we intend to explore it on two wheels. Because as we always say: “If not now, when?”