We’re about 30 miles out in the Norwegian Sea and I’m questioning my half-hearted effort to strap the bike down to the car deck of this large ferry. We have another two hours to go before they open the deck to passengers and I can see the results of my being lazy. Hopefully I find the bike upright and where I left it. Worst case, in these rolling waves, it’s fallen either to the left, on top of a Harley, or to the right, on top of a BMW K1600.

The past few days we rode north. The trees are getting smaller and fewer. The hills likewise. But the roads still run along rivers and fjords, and the scenery would otherwise be spectacular, comparable to the Rockies in Colorado, Idaho, and Montana, or the river valleys of Oregon and Washington.

It would be, but we had left the Geiranger area a few days earlier, and now that was our reference point. What should have caused us to stop for photos a few days ago now just brought a glance as we continued on. It reminded me of a post I wrote six years ago, about overhearing two travelers talking about the upcoming end of their travels and how they would handle everyday events now that “Amazing had become the norm”. We had been sucked into that mindset, and needed a reset.

Outside of Surnadal we passed this Norwegian church.

The Arctic Circle tourist center is a bit easier to reach than the spot on the Dalton Highway in Alaska, and there’s an actual building here. Then again, there’s a real road, and communities much further north on the road.

This is the second time we’ve crossed the Arctic Circle in less than a year: last August we crossed with our friend Dave in Alaska. 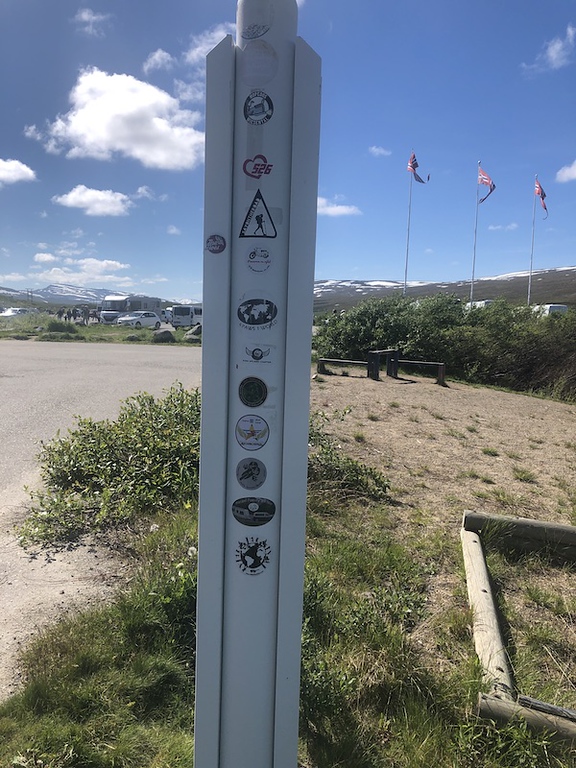 Added the 2RideTheGlobe sticker to a post near the Arctic Circle marker.

The detour to Lofoten brought a combination of more incredible scenery, tempered by a crush of tourists.

When we arrive in Moskenes and I’m finally able to get down to the car deck to check on the bike, I’m relieved to find everything is just fine. We disembark and head the short 200 meters to our campground. We had a reservation on the 6:45pm ferry, which arrives at 10pm (it never gets dark here, so arriving late means we can still ride in daylight and see to set up camp). We got lucky and although the 3pm ferry was sold out, they had room for us and we arrived just in time to ride straight onto the ship. 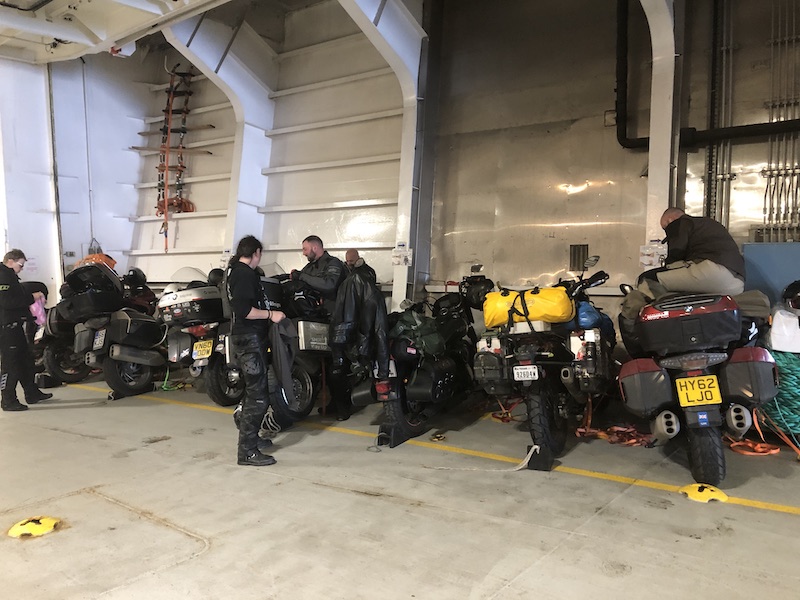 Phew. All good on the car deck…the bike is still upright.

On the ferry were four guys from Scotland, on a crazy-fast trip to Nordkapp in something like 16 days round trip. They had these “Short Way Up” stickers on the bikes, an obvious play on the Ewan McGregor/Charlie Boorman “Long Way Round/Down/Up” Series. They also had “Nordkapp Nimrods” stickers on the bikes. We passed them again just south of Alta, which is about 150 miles south of Nordkapp. They had already made it to the top and were headed back.

Also on the ferry was this guy, on a custom Harley. He’s from Spain, but living in Norway for quite a while now. Super nice guy.

I originally met the Harley rider two days earlier north of Geiranger at a gas station, where I had another “Vindu” moment: A guy pulls up on a Harley, with a long ponytail and a black “Rock and Roll” t-shirt. We get to talking and I ask him where he’s going.

I just assumed there was a large heavy metal concert festival going on somewhere in Europe. Two days later we bump into each other on the ferry to Lofoten, and he’s still on his way to Hammerfest. It turns out he’s headed home, to Hammerfest, which is the name of the small town just south of Nordkapp.

Arriving to Lofoten a few hours earlier means we can still find a campsite. The Lofoten islands are a heavy tourist destination, and it’s holiday time in Europe. We’re able to find a small patch of grass to pitch our tent. Those arriving on the later ferry have to cram their tents against others, or hike up the hill to find a more private spot. 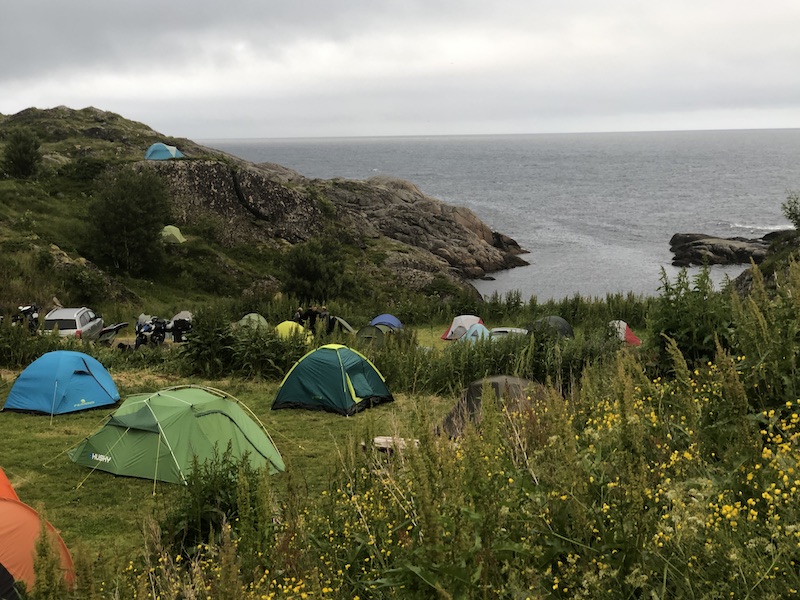 Just another beautiful camp spot in Norway. Hard to beat.

The main road up through Lofoten is about two hundred miles long, from the southernmost fishing village of Å (pronounced somewhat similar to “oh”) and the northernmost town of Andenes. Several bridges, tunnels, and ferries connect the islands and make it possible to ride from one end to the other in a day. Campgrounds near each end fill up with new arrivals off the ferries as well as those staging to catch the ferry the next morning.

We were advised by many people we met on the road to visit Lofoten. It’s pretty spectacular, with the large green mountains jutting straight up from the sea. It seems like something you’d see in a more tropical area, such as Thailand, or Malaysia. Some of them remind me of Hawaii, with the green valleys between the steep walls. There are even a few sand beaches. Of course we’re above the Arctic Circle, so while it’s not a tropical paradise, we’ve arrived on a day that the weather is 73F and sunny, and there are actually people on the beach and even swimming.

The small fishing village of Å lies at the southern end of Lofoten.

The road through the islands runs mainly along the coastlines, with bridges, ferries, or tunnels connecting them. 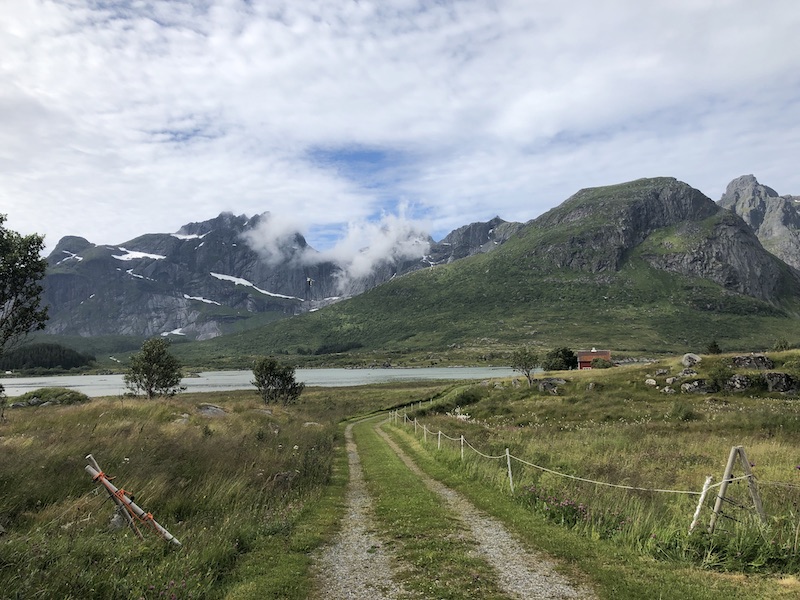 A little two-track livens things up, in case the scenery isn’t enough.

Our campsite in Andenes, on the northern end of Lofoten.

It was actually in the low 70s Fahrenheit when we arrived, and people were sitting and playing on the beach, even swimming in the sea. Keep in mind that we are 207 miles above the Arctic Circle at this point.

Later in the evening a storm blew through, the wind shaking the tent for a couple of hours and raining fairly constant. By morning it was 48F as we packed up and headed a few miles up the road to the ferry back to the mainland and on towards Nordkapp.

And to wrap it up, here’s another short video of some of the scenery while riding through Lofoten.