We’ve finally gotten far enough north that we can slow down… a lot. So our day from Mae Hong Son to Cave Lodge just north of Soppong was a total of about fifty miles and just under two hours.

On the way, we stopped at this scenic overlook. 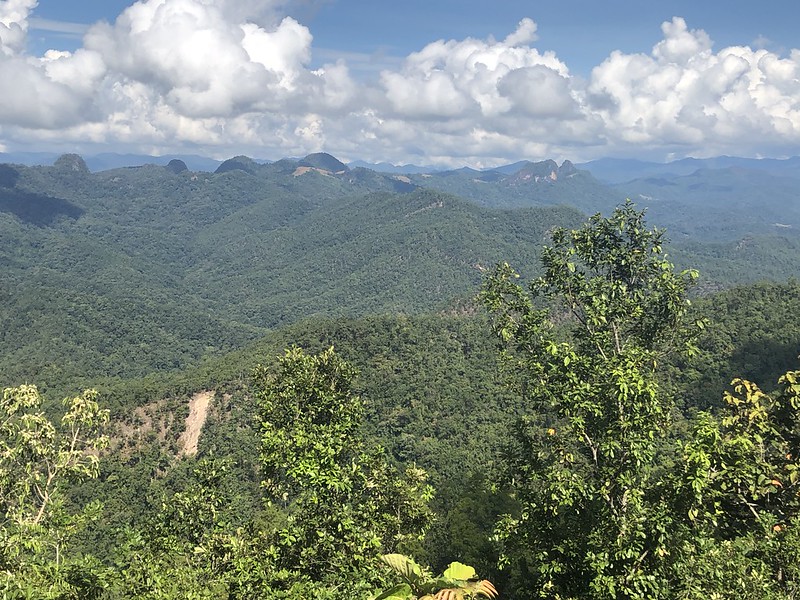 The mountains in the distance are Myanmar. 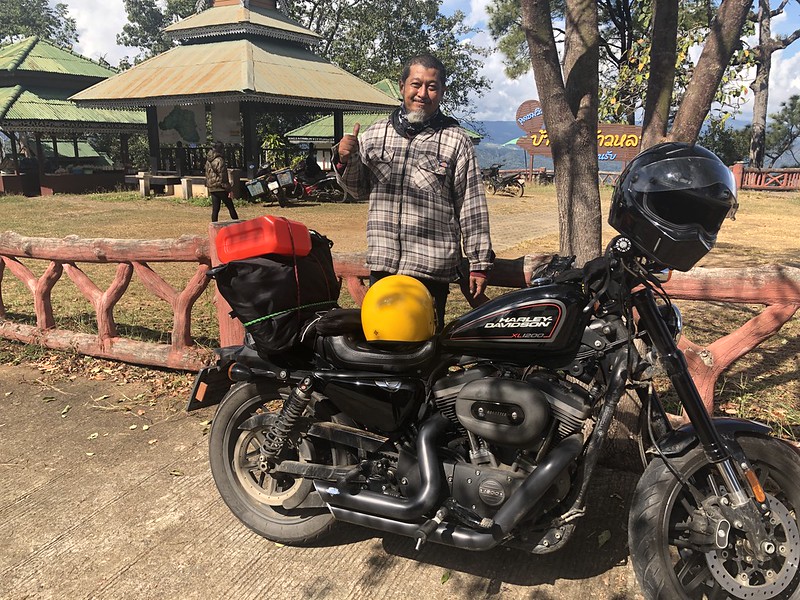 While we were there, a Thai guy pulled up on a Harley. Aside from a few large BMW GS adventure bikes, this was the largest bike I had seen in Thailand.

Across the road from the acenic overlook is a large strip of market stalls operated by Lahu Na, or Black Lahu women. The Lahu are an ethnic people from China and Mainland Southeast Asia. The color (in this case black) refers to their dress color. They were selling local fruits and vegetables, handmade crafts, and more.

About six miles north of the small village of Soppong is the even tinier village of Ban Tham Lod. This is where John Spies, an Australian native, and his local Shan wife Nang settled in the mid-1980s, and began building what is now known as Cave Lodge, a basecamp of bungalows for adventure tourism, mostly involving hiking, kayaking, and caving.

The entrance to Cave Lodge.

Hanging out in the large common area at Cave Lodge. This is where meals are served, and there is a ton of information here about available caving and kayak trips that all start from here.

Our bungalow. Queen size bed, private bath, A/C, fridge, and a small porch off the back. $19 a night.

John is a fascinating guy. Over the past forty years or so he has explored northern Thailand extensively, and discovered many large cave systems. He is extremely knowledgeable about the geological makeup of the area, the flora and fauna that is found here, as well as the history of local people. Some of the caves he has discovered hold teak log coffins that are as much as two thousand years old.

We signed up for a kayak trip to a nearby cave that John had found called Susa Cave. Our day began with a forty minute ride in the back of a pickup truck to a location on the forest-lined Khong River, where we launched the inflatable kayaks and proceeded downriver for about fourteen kilometers.

Kayaking the Khong River. It had rained a bit the last few days so the river was muddier than usual.

We stopped to have lunch about half way down the river. The lodge provided fried noodles with vegetables, a hard boiled egg, and a muffin. 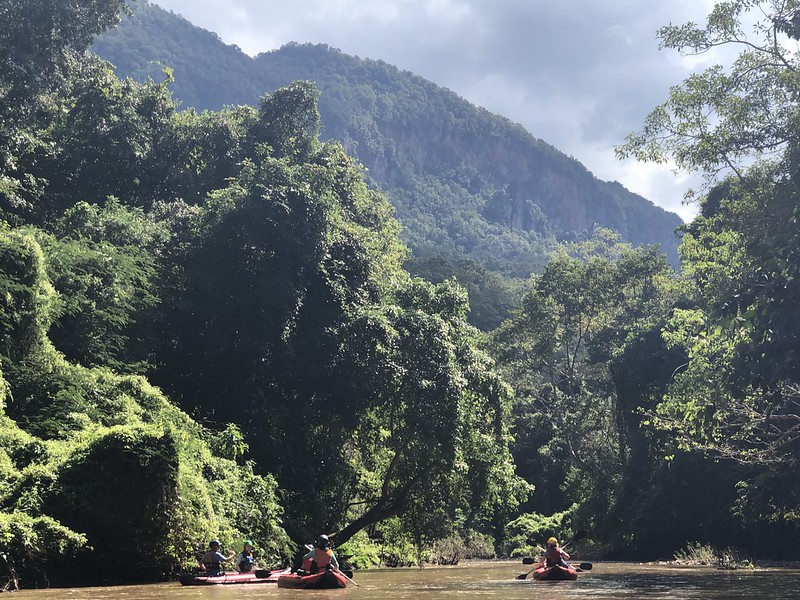 After beaching the kayaks, we waded across the river and hiked about a kilometer up through the forest to the mouth of the cave.

Our group consisted of a family from British Columbia and two brothers from Denmark, one of which has been living with his wife and kids in Bangkok for the past four years. And of course, us…”the old people”, as usual.

While it never got more than about waist deep, crossing the river was a bit more tricky than it looks. There were large rocks that you couldn’t see, and the current was fairly strong.

The cave is well hidden and deep into the forest. It took our guide a couple of tries and some hacking away at bamboo to find it.

Making our way down into the mouth of the cave.

We walked through two large rooms in the cave. Each was probably 60 to 70 feet high and a hundred feet across. There was a small river in the cave, well below the level we were at. It was a bit eerie being in such a strange place with nothing but headlamps and a large light the guide brought. For some reason everyone felt the need to talk quietly, as if speaking at a normal level might disturb the spirits living in the cave.

Looking back out as we climbed back up out of the cave.

These falls flow out of the caves in the mountain and into the river just downstream of where we waded across. 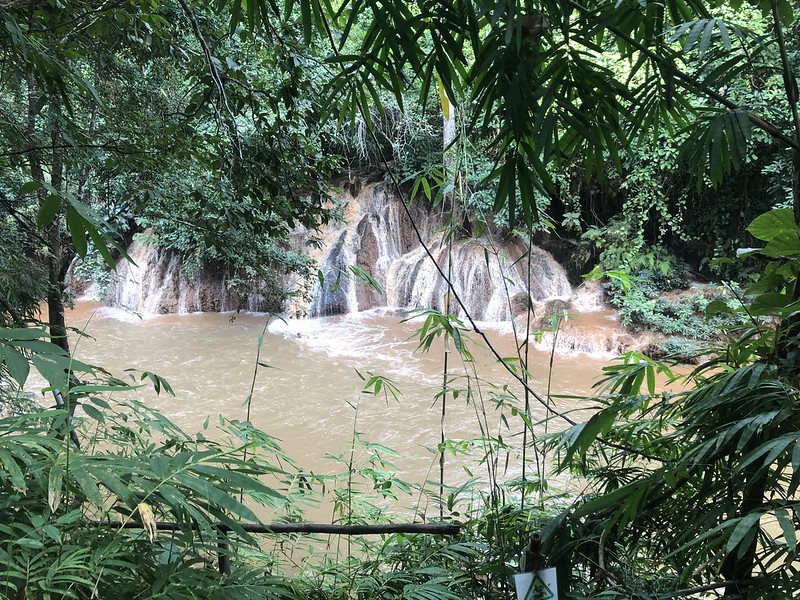 After leaving the cave and wading back across the river, the truck picked us up and took us back to Cave Lodge just before sunset. It was a long tiring day but worth it to see a spectacular cave that few people even know about.

The next morning we were up early to hike about forty minutes to the back side, or exit, of the Tham Lod Cave. This large cave is a popular tourist spot. Guides lead tours through the cave by lantern, and you board a bamboo raft to ride the river through and out of the cave.

But we weren’t here for the cave tour. We had come to the exit of the cave, where the river flows out, at sunrise to watch 300,000 swifts leave the cave on their daily feeding ritual. The loud noise this huge flock of birds makes sounds like a very loud continuous screeching of a home smoke alarm.

Our early morning walk took us through the local village, where even the dogs felt it was too early to move.

Crossing the river on a bamboo bridge to get to the back side of Tham Lod Cave.

We passed several monks on the trail. One was carrying two walking sticks, and handed one of them to Diana just before a slippery muddy uphill bend in the trail. At the top of the hill, we met another older monk going down, and Diana handed the walking stick to him. Karma.

Looking out from just inside Tham Lod Cave. It was all but impossible to avoid getting hit by bird poop as hundreds of thousands of swifts circled and left the cave.

I hiked a ways into the cave and climbed to a point to get a better look at the birds exiting the cave. Here is a short video of them and all the noise they make. They’re still a bit hard to see in the video.

After walking back to Cave Lodge, we loaded up and hit the toad again for our next big ride: 27 miles to Pai.