We left Natural Bridges National Monument, and just a short ride down the road, we turned south on Utah State Route 261, a nice two lane road that eventually turns to dirt. And then turns to stunning.

The Moki Dugway was built in 1958 to transport uranium ore from Fry Canyon to a processing mill in Mexican Hat, Utah. 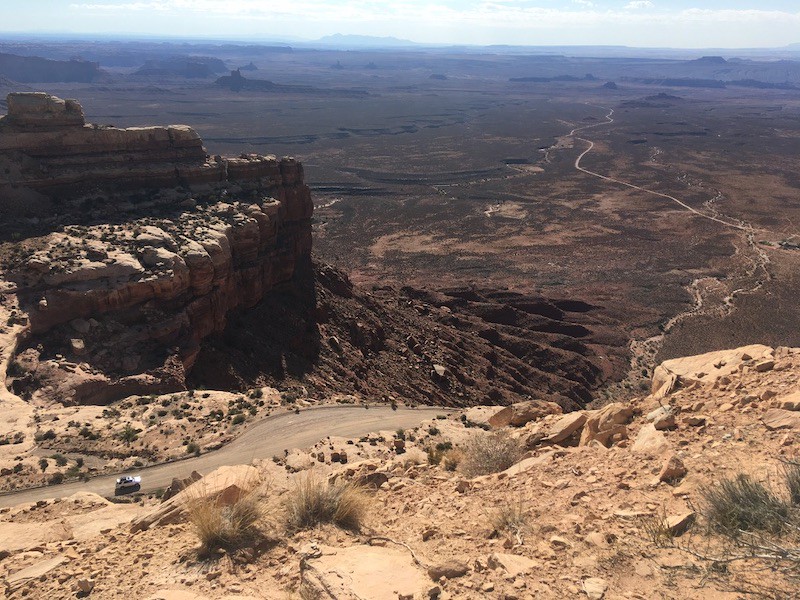 The term “dugway” refers to a road that is cut into the side of a cliff or hillside. The road here descends at an 11% grade, and has several switchbacks. It overlooks the Valley of the Gods, and in the distance, Monument Valley. 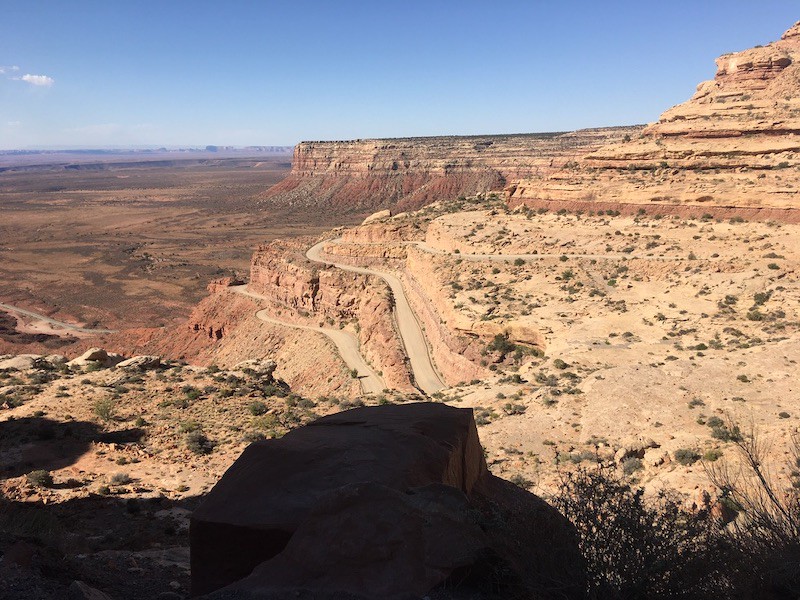 The road has even been listed in the Top 10 most dangerous roads in America, although I would argue that any freeway in Southern California or Houston can be more dangerous. Then again, it’s only as dangerous as the operator(s).

We dropped down the Moki Dugway and into Mexican Hat, then across to Page, Arizona before heading back into Utah and to Kanab. The meter on the bike briefly showed an ambient air temperature of 100 degrees. I decided that our new Klim gear was quite comfortable up to about 84 degrees, even when just standing around, but at 100, with all the vents open, it was warm. Okay, hot when standing still. But still quite bearable when moving 65mph.

We had planned to camp at an RV park in town where I stayed in 2018 with our Polish friends Marcin and Ella, but when we arrived, the manager informed me that they didn’t really have those places available for tents any longer. And sure enough, the nice grass, shrubbery and trees were mostly gone in that area, and it looked blazing hot. When I mentioned that we might just try to find a hotel, he offered that we could “stay in the basement” for just a little more than a tent site. The basement turned out to be just a small room with a bed, but it was clean, and most importantly cool. Sure, we had to walk to the RV Park toilets and showers, but it was closer to our budget than the tourist-hotspot hotels in town.

That’s the stairs down to our room to the right of the bike, in the basement of the office at the Hitchin’ Post RV Park in Kanab. Nice and cool, good wifi, reasonable, very nice hosts.

Some hiking in the morning, another night in the basement, then we will move a little north for a couple of nights before settling into a small cabin for four days.