I realized last night that I had inadvertently left my Delorme InReach GPS tracker set to record once an hour, which was fine on a sailboat moving at 7 knots, but it doesn’t leave much of a breadcrumb trail at 85 kmh. I reset it this morning, so the tracking should improve again, for those following my “Where am I now?” link.

Leaving Mompox I am expecting 50 to 60 miles of rough dirt road before I get to Highway 45. I am pleasantly surprised to find pavement. Well, mostly pavement. Well, it used to be pavement, not that long ago. There are still nice stretches of smooth tarmac, sometimes for miles, but in other places, it has deteriorated into a mass of potholes and troughs, and I have to pick my way through slowly. As usual, there are large trucks and buses going the other way, and they not only have to use the same tracks through the holes, but they seem to pretend that I am invisible. If we are approaching the same track, it’s not a matter of who gets there first, it’s always simply who is largest. And I lose every time. Often I have to move not just to the edge of the road, but off the road, if they are using a track that leads all the way to my side of the road.

The pavement stops as I enter Guamal, a small town on the other side of the river (there is a bridge this time). It’s odd that the roads are paved up to the towns, but all of the streets in town are dirt. I pick my way through Guamal until I find the road leading out of town. It stays dirt for a few miles, and topes are replaced by large irrigation canal crossings about four feet high. At this point I’m wishing I had a YZ250, with no luggage. These things would make great jumps at speed.

Back on nice pavement after refueling in El Banco. Ahead of me I see a group of six to eight motorcycles approaching. Locals on their way to work. Eight motorcycles and a trailer. Just a trailer. A two wheeled cart, about four feet by five feet, with bicycle wheels. Not attached to anything. Obviously it was attached to one of the motorcycles just prior to now, but it has detached and is traveling with the group independently. It’s moving about 35 mph and so far has managed to stay in their lane. I’m thankful that the builder of this trailer did a good job of aligning and installing the wheels. It passes me, half in each lane, and I continue on.

Keeping in mind that motorcycles are the cars and pickups of Latin America, when it’s the only transportation you have, you carry everything on it. On this day I passed this guy, with the equivalent of 6-foot-long railroad ties on the back. That’s a balancing act, front-to-rear and side-to-side. Yesterday, I passed two guys on a bike, and the passenger had a live pig in a bag under each arm. I’ve also seen guys carrying 20 foot sections of rebar, large spools of electrical wire, you name it.

Highway 45 south is straight and not much to see until I get past San Alberto, where it begins to climb into the hills. Now the road is fun and twisty for the next thirty miles into Bucaramanga, which appears on the opposite hillside as I descend into the valley. Bucaramanga is a much larger city than I had expected, with a population over half a million. 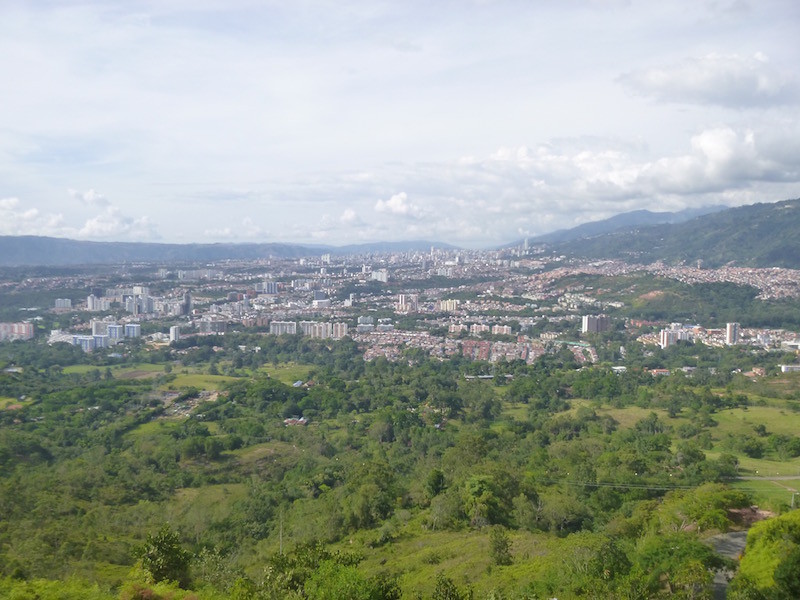 Although the highway goes around town, I end up going directly through the center of it on surface streets in order to get to my destination for the evening. At each stoplight dozens of motorcycles and scooters thread their way to the front of traffic. I do the same as long as my wide panniers will fit. A few riders stop next to me and just stare at me and the bike, like I am from another planet. But more often, riders pull up next to me and give me a thumbs-up, shouting “Bienvenidos a Colombia!” I am experiencing what I have heard about prior to this trip: Colombians are incredibly friendly.

On the south side of town I climb sharply up a hill to Parapente Colombia, a paragliding site high above Bucaramanga. Next door is a hostel with parking for the bike. I pull in, unload and spend the rest of the afternoon watching the large wings float gracefully just above me. 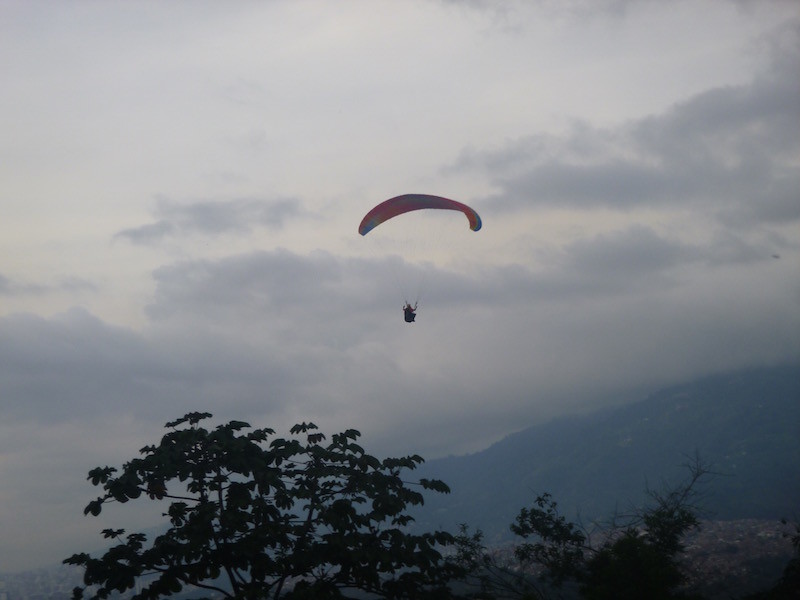 The hostel is “cat friendly” and my roommate for the evening is nearly identical in appearance and attitude to my own cat Dexter, who I miss a lot.

Dexter Imposter. I called him Ed, for Extra Dexter.

2 thoughts on “Mompox to Bucaramanga”