Bear with me a minute to give a little background…

A little more than two years ago, an Australian couple, Glenn and Leanne, came through Texas on their Triumph Tiger XC. They were touring North America, and I offered them a place to stay for a week or so while Glenn did some maintenance on the Triumph.

While waiting for some parts to arrive, they decided to go camping in the Texas Hill Country west of Austin, and invited me to come along. So I loaded up my Super Tenere and met them at a public campsite near Llano, Texas.

During the night, I heard two other motorcycles pull in and set up camp next to us. In the morning, I walked over and introduced myself. The two bikers were Michal and Lukasz, and they were from Poland. They were on one leg of their journey they called “MotoAmeryka”. Each year they worked for eleven months, then took one month vacation and flew to wherever they had left the bikes the year before. They would ride for a month, leave the bikes again, and fly home, returning to work until the next trip.

When I met them, they were headed from California to Florida on the “Easy Rider” leg of their trip, where they planned to leave the bikes until the next leg of their journey in 2015. I gave them my card and told them if they were in the Austin area and needed anything to call me.

Fast forward to September 2015. I’ve sold my house, my car, and most of my possessions, and placed what remains into storage. I am now on my XT250 in Central America, when I receive an email from Michal. He and LukDob are headed back to Texas and looking for a place to store their bikes until 2016 (or later) when they plan to ride into Mexico. I offer some space in my storage, and they accept. We’ve met for a total of about ten minutes in a park in Texas, and they’re leaving their bikes with me. Well, technically not even with me, since I’m in a different country.

So now their bikes are in Texas, and I’m on my XT headed to Jary, their hometown in Poland. So, back to the present trip.

As I was headed across Germany, I received an email from Daniel & Joey offering a place to stay in Daniel’s hometown of Dresden. They had been in Dresden for two months — the first time home in two years — but left a week or so before for South Africa to begin their ride north. I told them thanks, but I was going to head on to Poland. They then offered to connect me with a friend of theirs in Poland, near the border with Czech Republic, who had a farm there and would put me up.

Soon after, I received an email from Mathias, Daniel’s friend, who offered to let me stay with him on the way through.

It was a short detour through nice countryside to Mathias’ farm in Wolimierz. He has a large place (it looked like about 25 acres) with a farm house on either end. Mathias has been living in Mexico part time, and Poland part time. We shared stories about Mexico, and he gave me some suggestions on routes through Czech Republic and Poland. 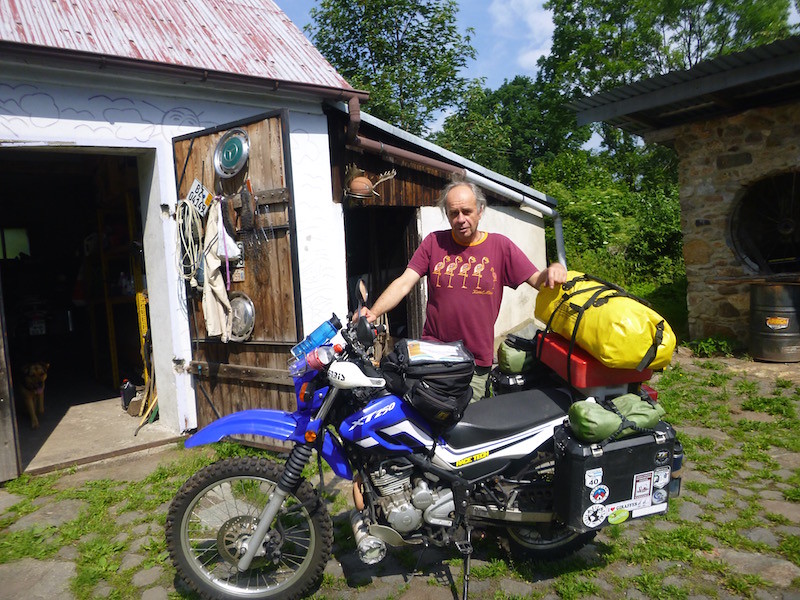 Mathias is a BMW guy, with a K1300RS and a 1200GS, but doesn’t have a problem with a smaller bike for the right application either.

In the morning I headed toward Jary. I had GPS coordinates, and it was only about 90 miles away.

About half way there, I rode off the map.

It turns out I had been a bit stingy when downloading my last map to my GPS, and left out part of Poland. So I was without a map. As usual, I was able to find a McDonald’s with free wifi, and proceeded to download a new map.

“Time remaining: one hour”.  Nope, not going to sit here for an hour. I decided I would download the map for Poland on my Maps.Me app on my phone and use that instead.

My phone then said “Time remaining: one hour”. Ugh. Okay, never mind. I pulled up Google Maps on my laptop and studied the route, packed up and headed out.

I was able to find Jary fairly easily, but as I approached the small village, I began to wonder how I would find the right house. Then I remembered Michal had emailed me a photo of the house. I pulled it up on my phone, and easily rode right to it. No gps necessary.

I was able to find the house from this photo Michal emailed.

Michal, his wife Patricia, and LukDob were waiting for me. We had a great lunch, and I settled in. 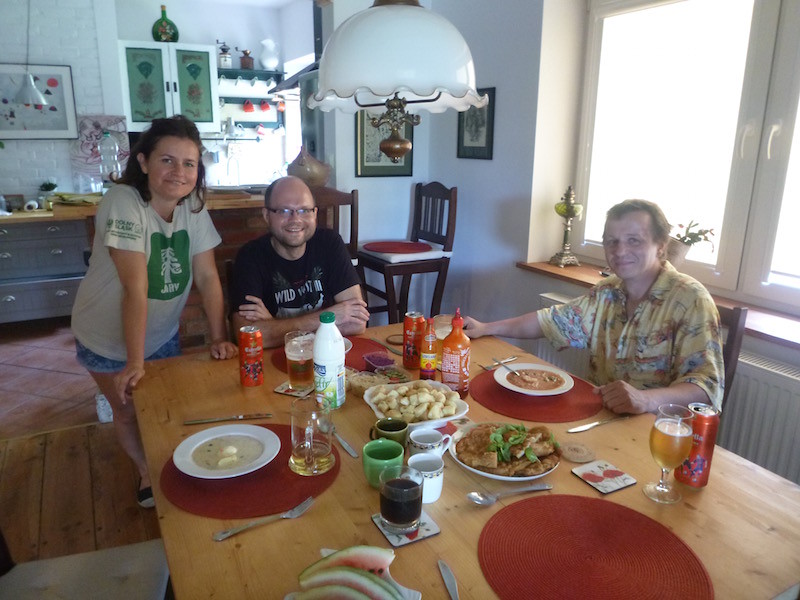 In the evening, they had planned a party with a lot of local friends and several other motorcyclists. 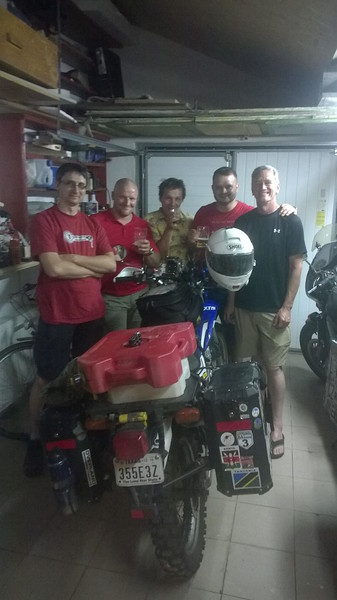 Hanging out in the garage with the bikes, like guys do. The guy on the far left is Leon, who rode his beautiful R100GSPD with “basket” (sidecar to us) to the party. Leon is also a huge punk rock fan, and introduced me to some Polish punk bands. 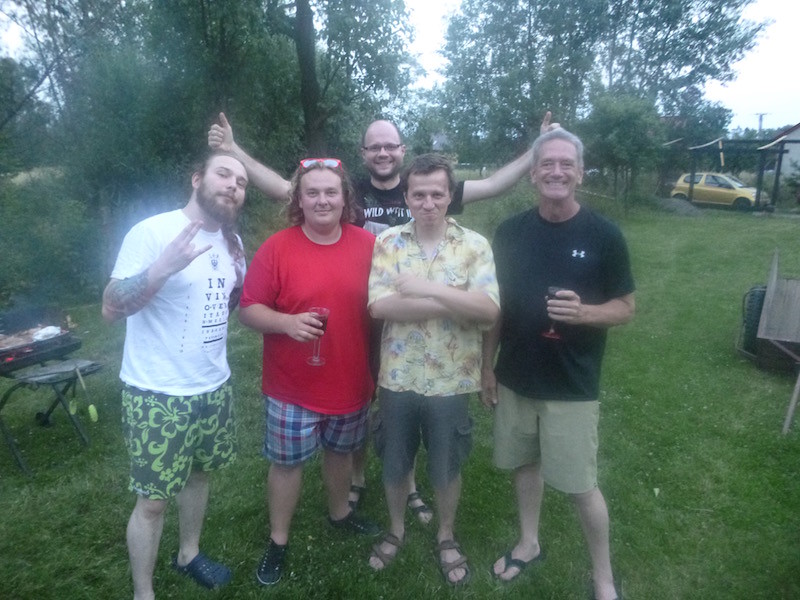 Lukasz in the back. Front, left to right: Michau, Michau, Michau, and Me. (Three Michaels. A bunch of really cool guys. The Michael on the far left plays guitar and sings in a rock band called Trzynasta w Samo Poludnie (a mouthful for a non-Polish speaker — Google them…lots of YouTube videos). The Michael on the right and Lukasz play in a band called Jary (after the town, obviously). the Michael in the middle isn’t in a band, as far as I know, but he’s a great BBQ cook! 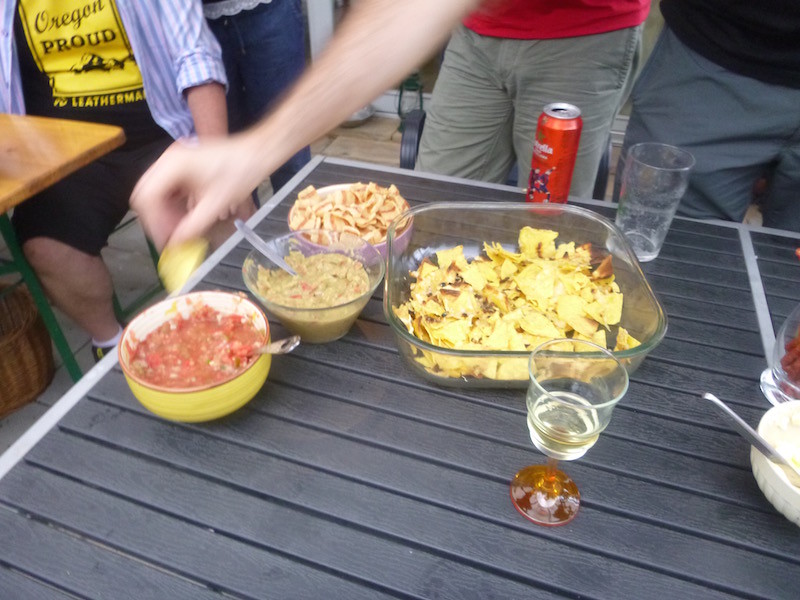 They even made nachos, salsa, and guacamole for me! Wow.

Tomorrow we head to Wroclaw to visit some of the local sights.