I spent two days with Cristian Maragaño, his girlfriend Tamara from Serbia; another traveler, Javier, who is staying with Cris and helping out; and Diego, who is working on MotoCamp Chile with Cris.

Cris spent more than four years traveling through 135 countries on his bike, and it was during this trip that the idea for MotoCamp Chile was born. When he returned to Pucon, he began to plan and execute this “motorcycle destination”. He has a beautiful wooded piece of land on Rio Pucon, and is in the process of building a small hostel, camp sites, cabins, a community kitchen, a performance stage, a workshop, and several large decks overlooking the river. Cris sees MotoCamp as an Event Center for motorcyclists. It’s a huge undertaking, and he is definitely taking it seriously. I toured the property with him this morning, and many aspects of the project are well under way. He plans to open for business in September of this year. This should be a perfect location to stay and do day trips out and back. There are many beautiful roads in the area, and Cris has a number of loops already laid out. 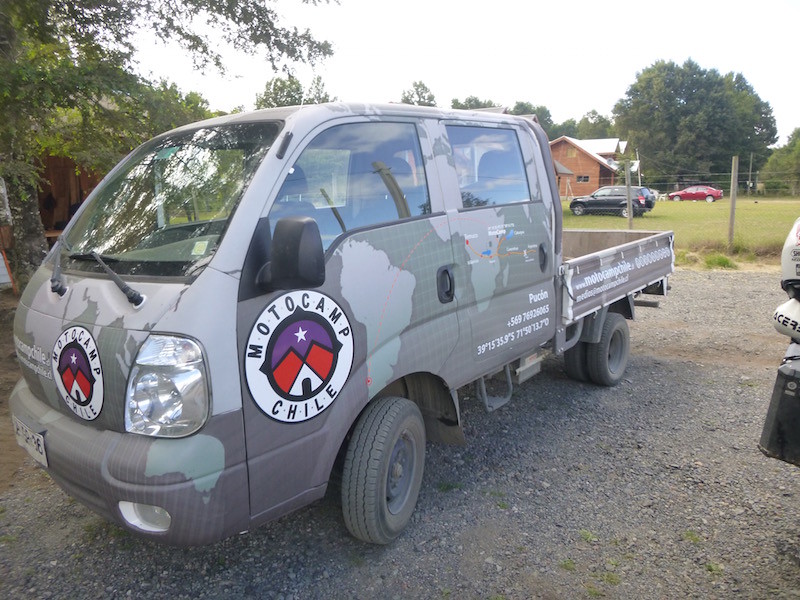 Huge deck being constructed overlooking the river at MotoCamp. The kitchen area and a BBQ will be attached. Just below this deck on the river side (to the right in the photo) is a series of terraced seating, with a gorgeous view of the river. 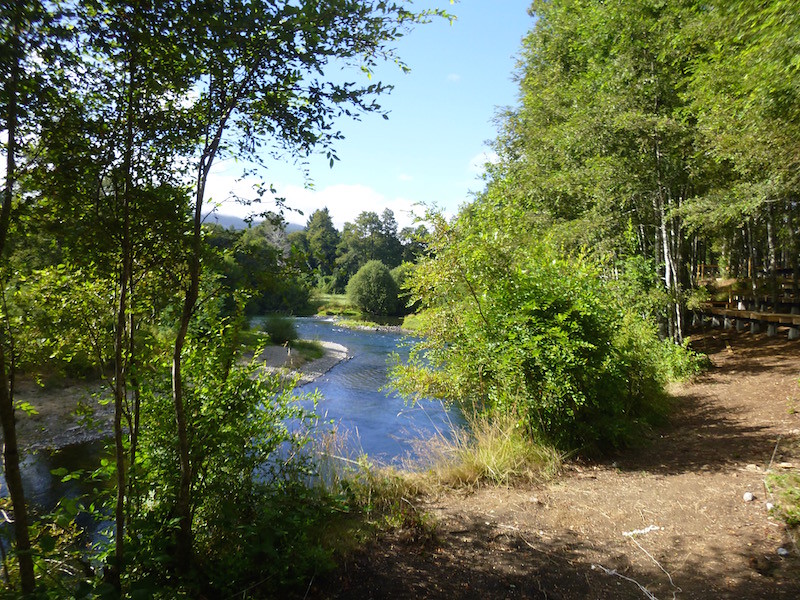 Looking out from MotoCamp Chile at Rio Pucon.

Looking from the future kitchen area to the campsites and future cabin areas.

Those of you who know me, know I drink very, very little alcohol. So after a beer and two bottles of wine over dinner, Cris broke out this really cool bottle of “rakia”, a vodka that Tamara’s father in Indija, Serbia gave him, and we all had a shot. I’m not really a wine drinker, but I had several great red wines here. Chilean wine is cheap in Chile. I paid between $3 and $5 for a couple of nice bottles of merlot and carmenere.

This afternoon, Javier took me into Pucon and I dropped my bike off with a small shop to have a fork seal replaced. (Javier rode a DR650 Suzuki from Chile to Alaska, and planned to return to Chile on it, but a failed main bearing made the repairs too expensive for him to continue. He sold the bike and returned to Chile, bought a Chinese 200cc bike, and plans to continue traveling around South America soon.) This is the second time for the left seal and it’s pretty clear that there are some small scratches to the inner fork tube that are causing it to continue to leak. It’s a bit frustrating not having the ability to do the work myself, or explain what needs to be done, to correct this problem. I’ll continue to work on it. Meanwhile, the right seal is beginning to leak. I have one more new fork seal, but will wait until Punta Arenas (another 2,000 miles) before replacing that one. Hopefully I can make it to Buenos Aires on these last two seals. My “to do” list for BA keeps getting longer and longer.

Small shop, great service in Pucon. He was quick to point out that the “ripio” (washboard dirt roads) and “polvo” (dust) contributed to my seal failure. No doubt. A lot more of both to come.