As I spent the last 7 weeks or so riding through Mexico, Guatemala, El Salvador, Honduras, and Nicaragua, I’ve spent a lot of time looking at all the other bikes. There is no question that in these countries people have less money to spend on transportation. In the rural areas, it is very noticeable that most people don’t have driveways from the road to their house. There is no need. It makes things more simple, as you can build further from the road, or up a hill that would be too steep to drive. As long as you can walk up it or your burro can walk up it, you can get home.

The transportation needs and abilities go from foot, to burro, to ox cart, to horse, to bicycle (it is amazing how much firewood, chickens, propane tanks, etc one can carry on a bicycle when it is your only method of transportation), to scooter, to motorcycle, to eventually car or small pickup. The far majority of families never graduate past bicycle. The next group is able to purchase a 125cc motorcycle. This serves as the family car, pickup truck, horse, etc, shuttling as many as five family members at once, or one or two and a large load of supplies. I saw more scooters in Mexico and Guatemala than I have seen since. Most all scooters and motorcycles tend to be between 125cc and 200cc. In Mexico, it almost seems like there is a law against having two people on a scooter; it’s always either one or four people. Typically Dad is driving, with a young child four to six years old standing on the footboard in front of him. Mom is on the back with a six-month-old to two year old child in between Mom and Dad. 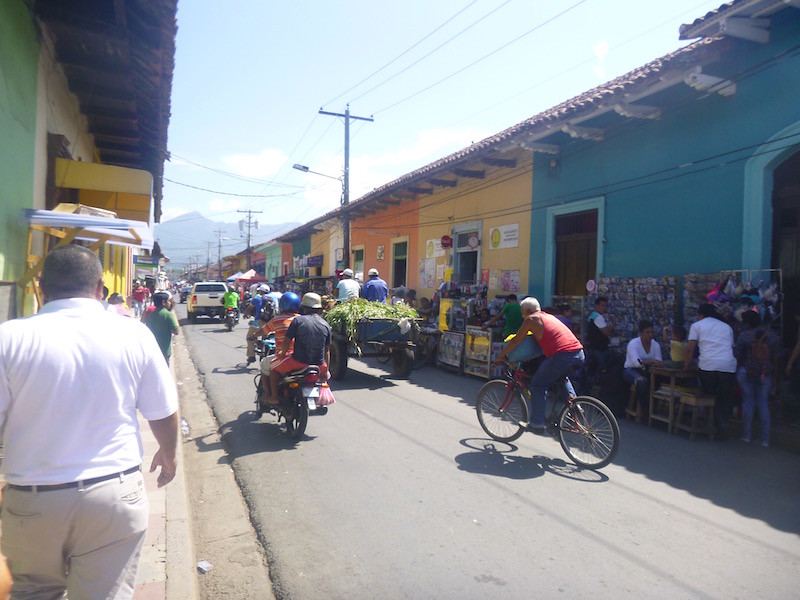 In Mexico, by far the most popular brand is Italika. While the name sounds like it might be Italian, it turns out these are designed and manufactured in Toluca, Mexico near Mexico City. Italika holds over 50 percent of the motorcycle share in Mexico, with over 400,000 bikes sold last year alone. As with everywhere else I’ve been, the most popular models are 125 and 150cc. They tend to be sold in Elektra department stores and similar places.

Leaving Mexico, the Italikas begin to fade and literally dozens of other brands show up. Just today I saw Genesis, Raybar, Dayun, Jialing, KYK, Platina, Yumbo, Sepento, and Haojue brands, along with a few Suzukis (the 100cc 2-stroke model is still quite popular) and a few Hondas. The venerable Yamaha YBR125 is still the high-end choice for reliability, and you see a lot of them, but price is a big concern in these markets. Because of this, the Chinese and Indian brands sell more. Styles range from what we used to call a “UJM” or Universal Japanese Motorcycle — the standard style bike — to sport models with large mufflers that resemble the 600cc and 1000cc supersport bikes in the U.S. and small headlight fairings, to what appears to be the most popular model these days: the 125cc dual sport bike. All of these have single cylinder air-cooled engines but with large radiator shrouds like a motocross bike, drum rear brakes and front disc brakes, and few frills. You tend to see more of the YBR125 street-style bikes in the cities, and more of the dual sport bikes in the rural areas. No surprise there.

The “Mercedes” of bikes in Latin America: the Yamaha YBR125.

My favorite feature of the Raybars: cast into the side cover it says “Japan Technology”. I’m amused that a Chinese motorcycle manufacturer basically copies a Japanese design, produces it in China, and has the audacity to include as a feature the words “Japan Technology” on the side of the engine. 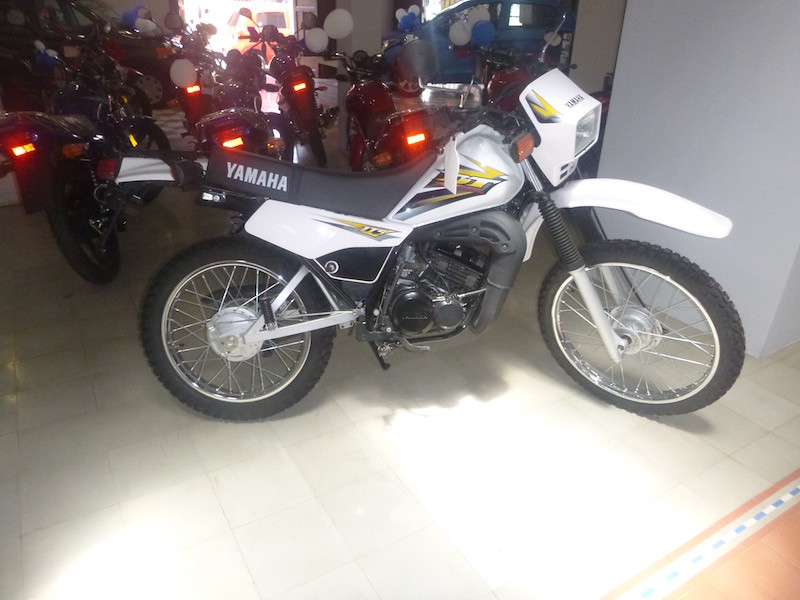 I stopped in the local Toyota/Yamaha dealer in Granada today, and among the YBR125s was this DT175 two stroke. Brand new. Virtually identical to the model that was sold in the US around 1980. I didn’t ask, but it appears to be a current model for sale here.

It’s also a bit odd to see so many motorcycles everywhere, but yet my XT250 is the only one with the headlight on during the day. People are often flashing their headlight at me to let me know I have it on, as if I have a choice.

My XT250 is a big bike for Latin America, but because so many bikes here are 125cc dual sports, it still tends to blend in. While I hear stories of all of the other riders who travel through on 650, 800, and 1200cc bikes who are constantly approached and asked the same three questions — How big? How much does it cost? How fast does it go? — I get none of that. Those who ride still tend to examine the XT closely, as it is different than what they see every day, but aside from the aluminum panniers, it doesn’t stand out from their own bikes. On the other hand, Judith’s water-cooled DR-Z400 draws attention (or it could be just that there’s a small woman on a loaded motorcycle with Swiss plate). The local police in San Salvador, riding air-cooled Yamaha YBR125s, asked her how many hours a day she could ride on her water-cooled bike.

Makes me consider how hard my poor little XT250 is working. But it hasn’t complained yet, and just keeps chugging along. It has definitely been a good choice for the trip so far.

One thought on “Motorcycles in Latin America”