“If you don’t have something good to say, don’t say nuthin.”

So, in keeping with that theme, I will skip Cochabamba and move on to my travels south towards Potosi and Uyuni.

My attitude has been suffering as of late, mostly due to the corruption and my treatment at the border crossing into Bolivia from Peru — which unfortunately pre-shaped my opinion of Bolivia — as well as the ridiculous inability to buy gasoline in Bolivia, which eats up a lot of travel time, as it typically takes three stops before I find someone that will sell me gasoline.

I’ll wait til I’m out of the country (in a couple of days) before I go into details about my border crossing into Bolivia, but when I mentioned it to a volunteer at a campground I stayed at, her response was entertaining, if nothing else: “Bolivia runs on corruption. If there were no corruption, no one in Bolivia would have a job.”

My attitude improved today. I attribute it to staying out of large cities (and the terrible traffic), and getting back to the country and the rural people, who are almost always friendly.

Sunday night, it rained about four inches in Cochabamba and much of Southwestern Bolivia. After leaving Cochabamba Monday morning (a feat in itself; it took me four hours and 50 miles before I made any real forward progress), I rode about thirty miles before I came upon stopped traffic. I rode to the front of the line (another reason to ride a motorcycle), and found that there had been a huge rock- and mud-slide, and men with large dozers and graders were working to clear the highway. While sitting there waiting, a Bolivian family approached me. The father spoke no English, but his son and daughter did. So we went back and forth; the daughter would translate if I didn’t understand something, and I would answer in Spanish where possible. We were all having a fun time while waiting for the road to open. (Side note: he saw my license plate and thought Texas was in Canada. No kidding.)

Once the road opened we all took off for Oruro. Again, I was refused fuel, but the attendant told me where I could buy fuel in town. And sure enough, that station had no problem selling me fuel. I still don’t comprehend the benefit of this system to the nation and its’ people. (Side note: the gas station attendant saw my license plate and thought Texas was in Mexico. No kidding.) 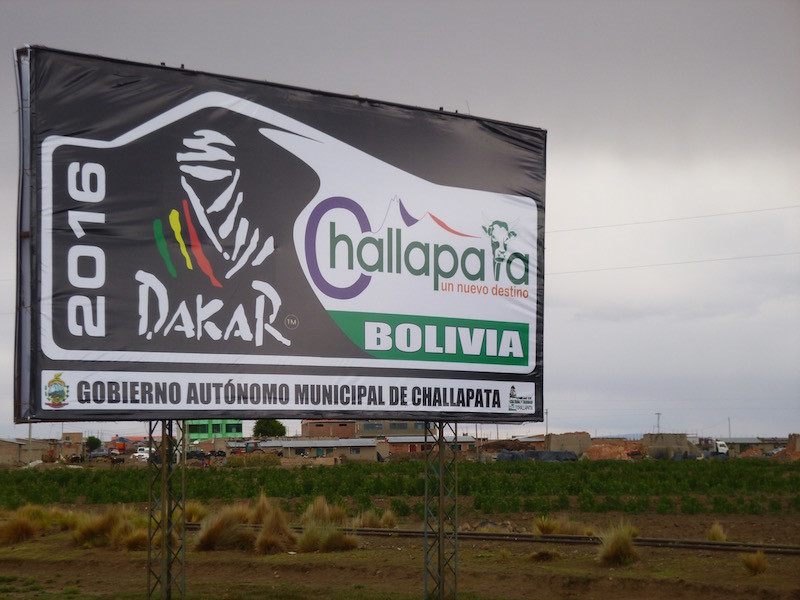 Near Challapata, between Oruro and Potosi. The Dakar race came through here about nine days ago. I just barely missed it.

It wasn’t long before it started raining again. Then it got really dark. Then the lightning started. Then the sleet. And of course this is all at around 13,000 feet elevation, so yes, it was quite cold. It was getting late, and becoming clear that I was not going to make it to Potosi before dark. I began scanning the roadside for possible places to camp. Due to the large amount of rain the night before, and the rain now falling, most everything was muddy and there were a lot of standing puddles.

Just before dark, the rain let up briefly and I spotted a dirt and gravel road going off to the east. I turned and headed down a couple hundred yards and found an old rock wall out of sight of the highway. The tent went up quickly, just before the rain resumed.

The rain stopped in the middle of the night, and in the morning it was a damp but beautiful sight. 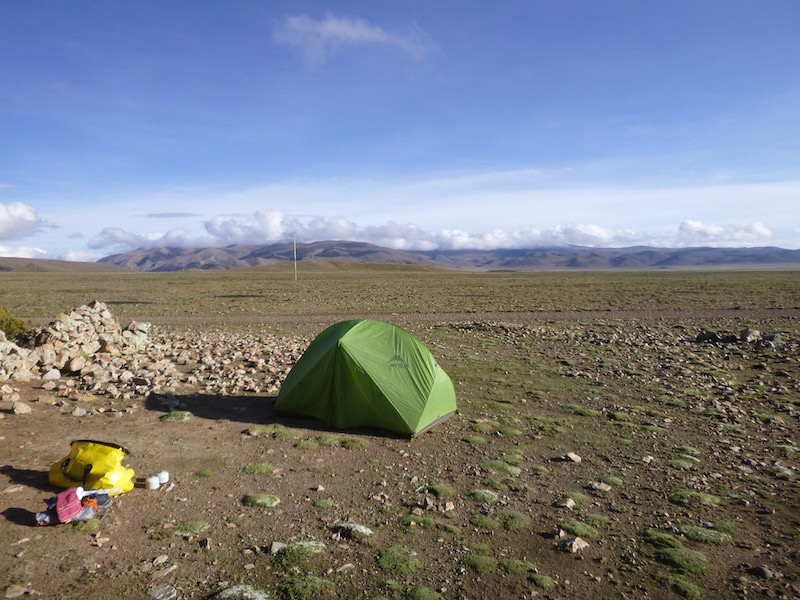 After coffee and allowing the sun to dry the tent, I packed up and headed south. 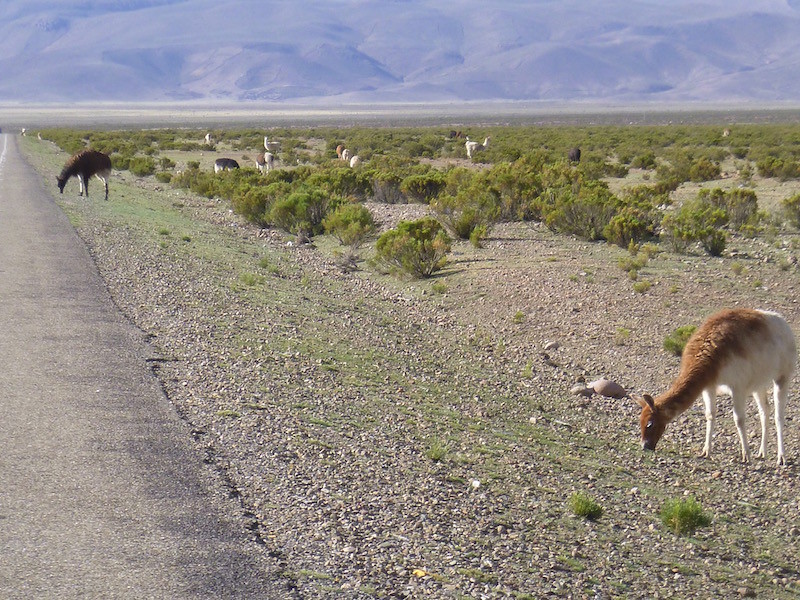 Hundreds of these guys along the road to Potosi and Uyuni. Some of them will suddenly run across the road. 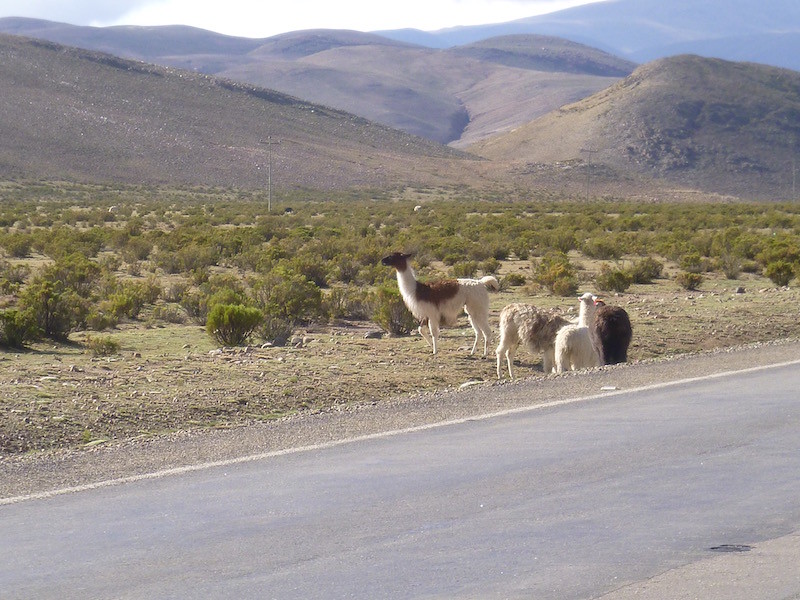 In a contest between Llama and Llamaha, nobody wins.

At a gas station in Potosi (the second one I tried — I was refused at the first), I met a couple from Colombia on a BMW F800 headed north. They had been to Ushuaia and were moving very quickly home.

Potosi claims to be one of the world’s highest cities at 13,420 feet, and was home to the Spanish colonial mint. It’s not very large, and I passed through it quickly headed to my destination: Uyuni. 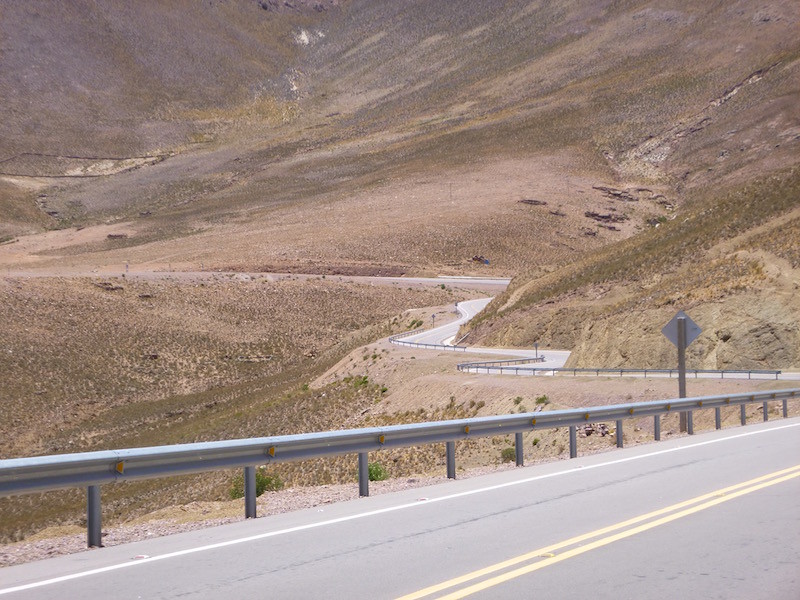 The road looked like this for about 90 miles. With virtually no traffic. I later found out why. But it was fun while it lasted.

The highway climbs and dips in the mountains, but mostly stays around 12,000 feet for the 130 miles between Potosi and Uyuni. Suddenly as you round a bend, the Salar de Uyuni comes into view.

The city of Uyuni sits at the edge of the Salar, and from high above, the city looks like something from Burning Man. As I descended towards Uyuni, I came upon another line of stopped traffic. I worked my way to the front, and this time it was clear that it wasn’t a rock-slide, although there were plenty of rocks in the road. 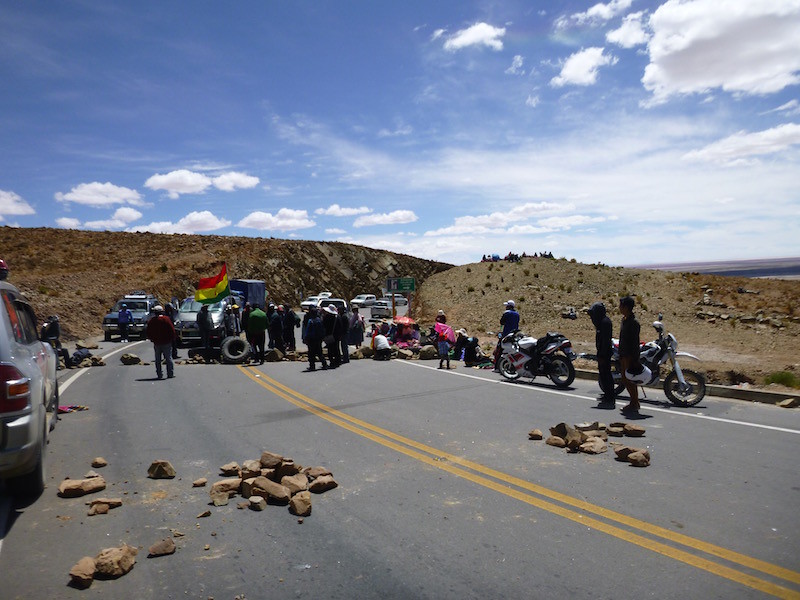 Unhappy, but non-threatening, at least to me. They smiled, rolled a big rock out of the way, and waved me through. 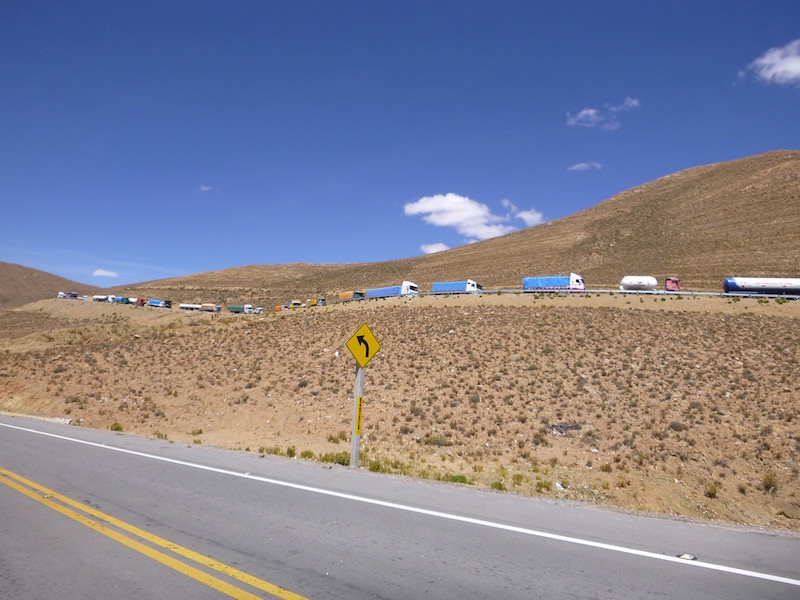 Looking back at the traffic blocked by the protesters.

I’m not sure what they were protesting, but they let me through. As I continued the last mile and a half or so to Uyuni, I passed dozens of tourists headed the other way on foot– up the mountain, with their backpacks and roller bags. They were all trying to get to their bus, which was waiting, stuck on the other side of the blockade.

I arrived in Uyuni mid-afternoon, and checked into the Hotel Inti, which has a garage for motorcycles. There is a Honda Transalp here also, with Swiss plates, though the hotel owner told me they were from Canada. I’m thinking they may have ridden from Canada, but are probably Swiss. Perhaps I will find out later.

Tomorrow I will visit the Salar, and perhaps work my way a little further south, setting up for my crossing into Chile.

2 thoughts on “My Mama Always Told Me…”