Having decided to avoid the rainy weather further south, we left Pu Luong and headed to Ninh Binh, south of Hanoi.

Ninh Binh is a tourist destination for people in or from the Hanoi area, as it can be reached in just a few hours (it’s only about 60 miles south of Hanoi, but as is typical the traffic through the cities in between tends to slow the average speed to around 20 to 25mph. Unless you’ve experienced traffic here (or similar places), it can be hard to understand why a flat, straight, well-paved road can only produce a 25 mph average speed. Here’s the easiest explanation I can offer: imagine trying to drive 50mph, and every couple of hundred yards is an uncontrolled intersection with dozens of scooters, car, buses and trucks entering from both sides continuously. No one stops. Ever. They just roll into the intersection in a blind game of 90-degree “chicken” and see who slows or swerves the most in order for everyone to clear the intersection without anyone stopping.

We finally witnessed a t-bone between two scooters at one of these intersections today. Fortunately nobody was going fast but it looked like a rugby scrum in the middle of the intersection, and with the only real rule being “nobody stops, ever”, it was simply a matter of time before two vehicles would occupy the same space. In this case the two school girls on one scooter hit the deck but appeared to be uninjured. With probably thirty other scooters in the scrum around them, the only other scooter that ceased forward motion was the one that t-boned them. Everyone else seemed to casually glance and continue their fight to get through.

Okay, back to Ninh Binh. It’s a tourist destination for good reason. The area is sort of known as the inland version of a Ha Long Bay, with boat tours on the river through beautiful green-covered limeatone karsts and several notable temples in the area.

Our first stop in Ninh Binh was the Mua Cave viewpoint. The cave itself is pretty disappointing, but the climb up the 500 steps to the viewpoint is pretty impressive.

There’s a bunch of photo opportunities here for tourists. This swing isn’t quite the same as the one in Banos, Ecuador, but if you squat down and take the photo just right, it kind of looks like it… 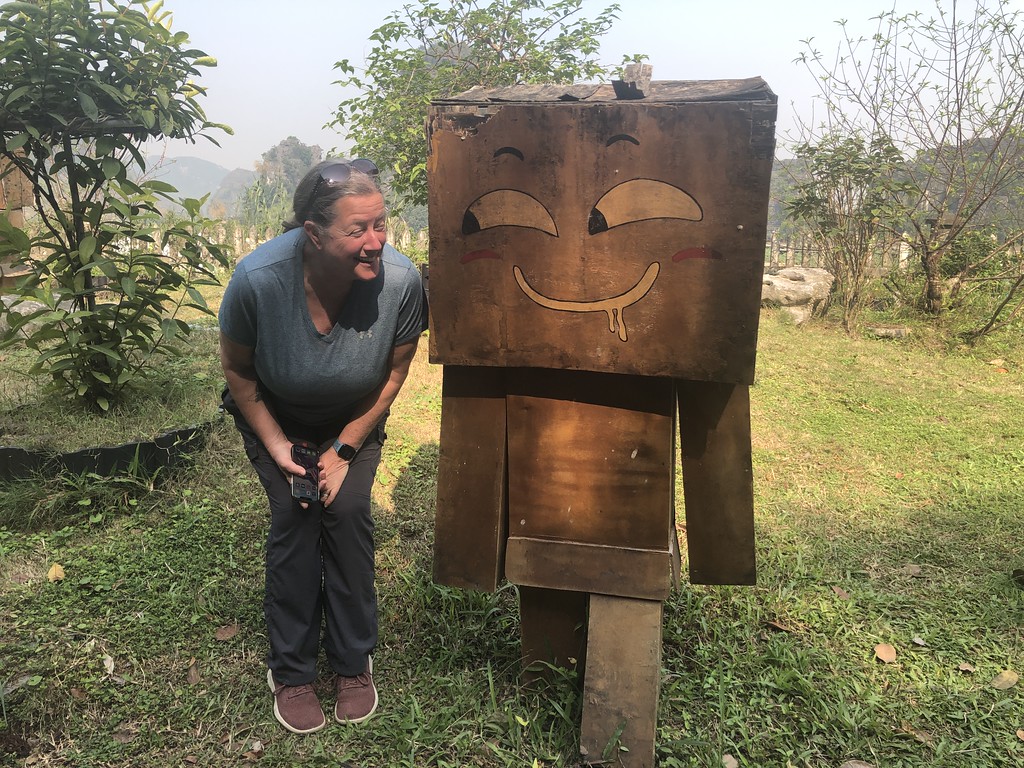 The view from half way up, looking across to the Temple of the Lying Dragon.

The view from the top.

Panoramic view from the top.

At the top is this large dragon sculpture. To get to it requires some climbing on slick, jagged rocks with a sheer drop on the sides (there is a chain to grab onto in places, but it’s still pretty sketchy). A guy behind me on the climb up said “This reminds me of Angel’s Landing in Zion…and I was scared to death there.” Yep, kinda sums it up. But also worth it for the view.

As I grabbed onto the dragon’s back for stability while taking this photo, I realized that the “fin” sticking up that I was holding onto was broken and loose. Not real condifence-inspiring. You can see someone behind me trying to climb back down.

The next day we took a three hour tour in a small rowboat powered by a local Vietnamese woman. It’s pretty amazing to me how these middle-aged women can row a boat with three or four large tourists for three hours round trip, then pick up another group and do it again.

We went to Trang An, one of several destinations for boat tours. At Trang An, there are three different tours to choose from — all of them three hours long — and we chose the tour that passes through nine caves. These caves are more like tunnels, as they enter and exit in different locations, and range from 100 to 400 meters each in length. The tour also stops at three temples along the way where you can disembark and have a look around. 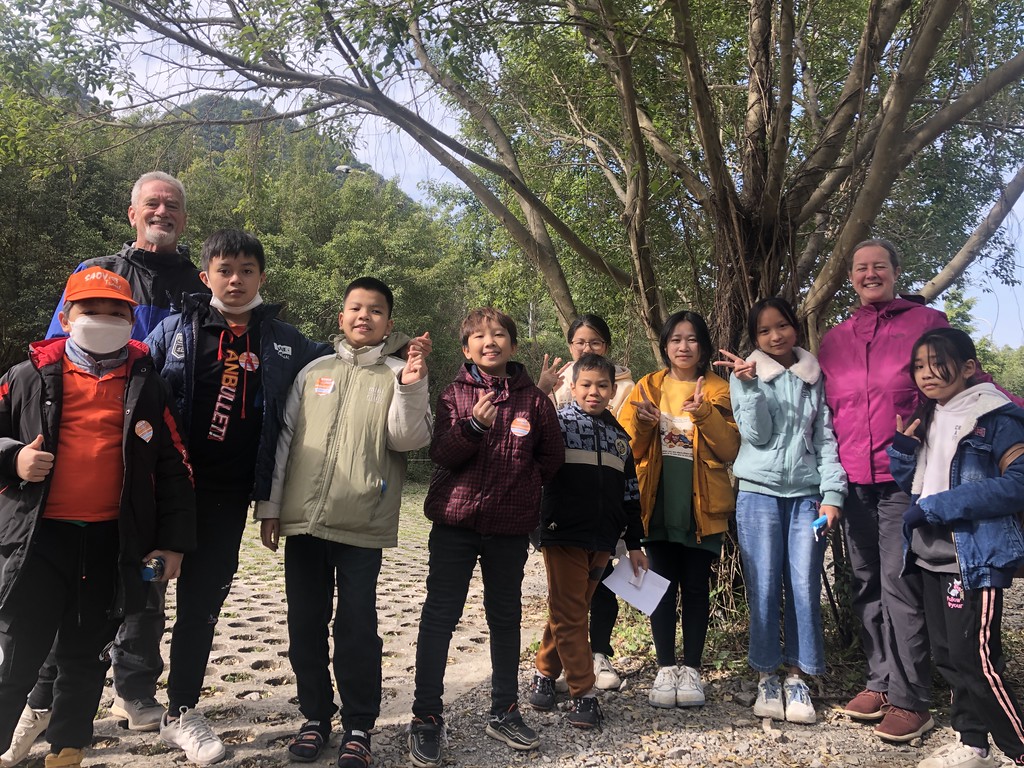 Just as we pulled in to park the bike, a group of local kids ages 10 to 12 came running up. They were obviously wanting to practice their English skills, and we obviously looked like the proper targets. We had a great time answering their questions (and asking a few of our own). Their English teacher, Jay from Nepal, has been teaching English in Vietnam for four years.

Quick side note: we got so wrapped up in talking with the kids as we got off the bike, that I totally forgot to take the iPhone that I use for GPS routing off of my handlebar mount. We walked away from it and did a three hour boat tour. I realized about half way through the tour that I had left the phone sitting on the bike in a crowded parking lot, but we were on a boat on a river and there wasn’t much I could do about it. When we returned to the bike, about three and a half hours after leaving the phone there in plain sight, the phone was still sitting there. Try that in the US and see how long it lasts! I don’t recommend this stupidity, but it just affirms the nature of the people.

Approaching one of the caves we went through. It’s slightly taller inside than this looks, but you still have to duck to clear most of them.

There were several temples along the way that are only accessible via boat. We were able to stop and tour each. 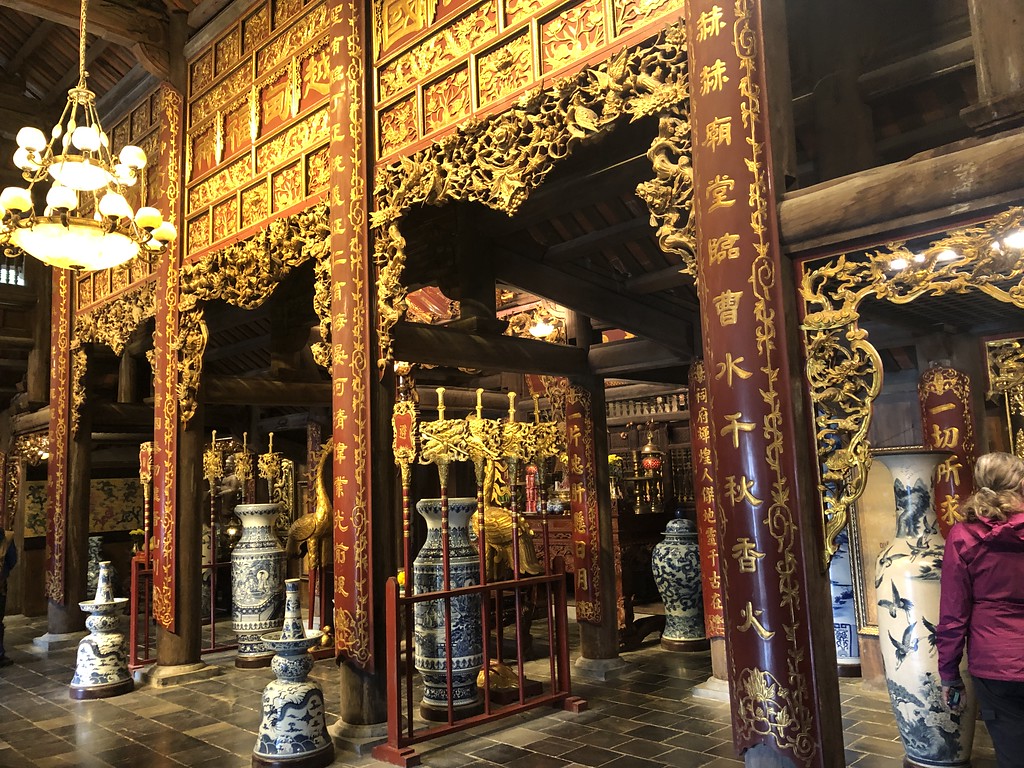 Many of the white walls near our hotel had very detailed murals of local scenery painted on them. And no graffiti. 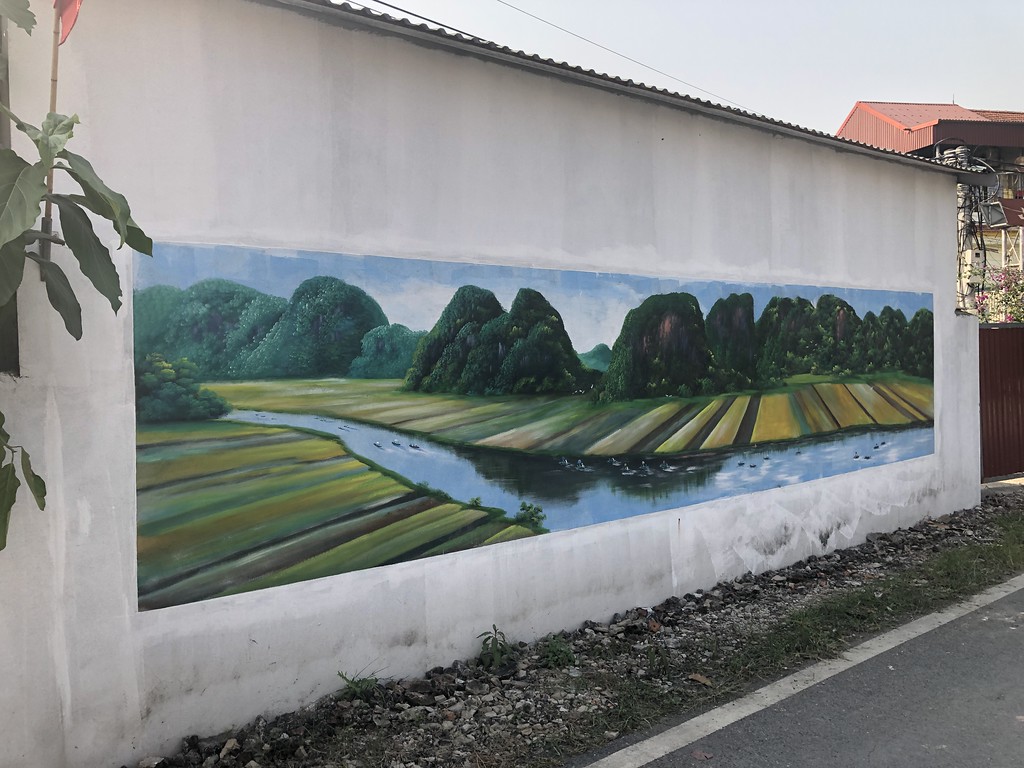 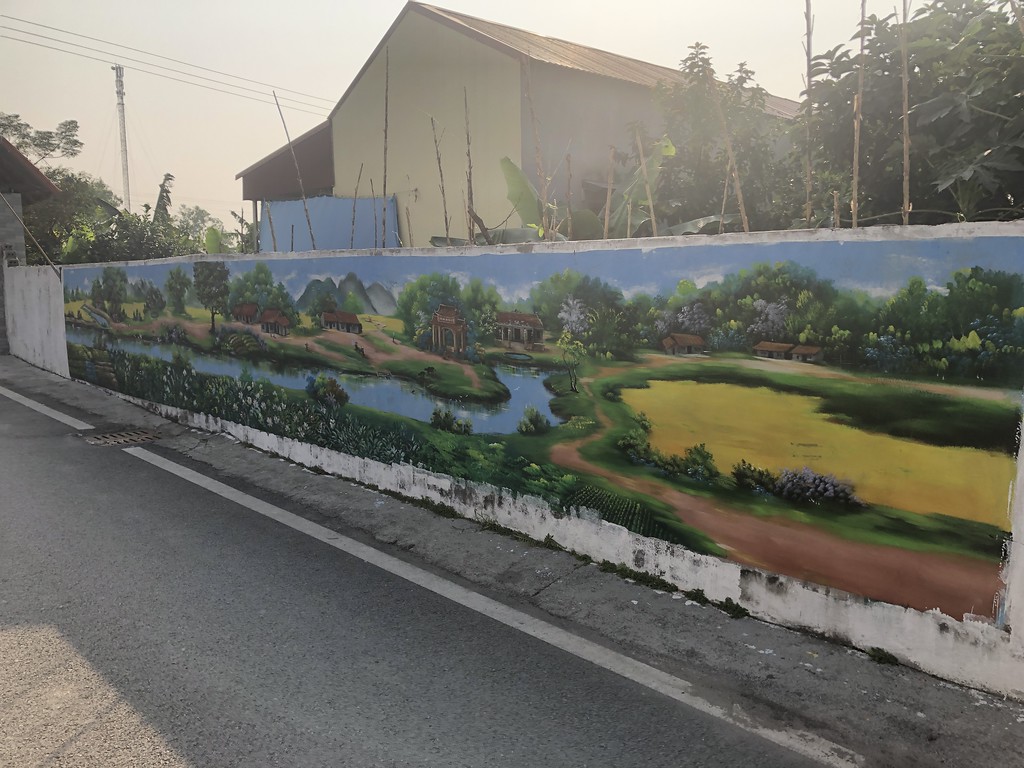 The dining area at our hotel was bordered on two sides by this “moat” full of koi.

Ninh Binh is definitely a tourist destination, but it has some great scenery and a very relaxed feel. We enjoyed our time here before heading back to Hanoi and the frenzy of that city.