I stopped in Karonga for fuel, and after checking all of the service stations in town, again found nothing but straight 40 weight motor oil. At least it was Mobil brand, so I decided to go ahead and change my oil. I had only been about 2500 miles since changing it in Swakopmund, but it was looking and smelling bad, so I decided to take the chance. I hated the idea of putting mineral oil back in it after using synthetic for the last 20,000 miles, but I figured I could change it again in Nairobi or later, which wouldn’t be too far. I bought three bottles of oil (it comes in 500ml, or half-quart, bottles which was perfect, since I needed 1500ml), rode around behind the station, changed my oil, and gave the woman at the station my used oil.

The border crossing was easier than I had expected. There was no line of people waiting, and the immigration and customs guys were very friendly and curious. I had been told (and read on the internet) that I had to apply for and obtain my visa for Tanzania in advance. When I presented it to the immigration officials, they looked it over for a long time, then asked where I got it. I told them I had applied at the Tanzanian embassy in the US. They asked why I paid $120 for it (the price is printed at the bottom), and told me that the official price is $100, and pointed out that there is a visa window right next to them, and they issue the visa right there. Oh, well. Live and learn. Regardless of what the official government policy is, it is usually something different at the actual border.

Once across the border, I was instantly inundated by Chinese motorcycles. Hundreds of them. They are everywhere, and many are used as taxis. I’m not sure why there is such a huge number of them on one side, and virtually none on the Malawi side, but I’m guessing there is some kind of import tax or duty in play. There are still bicycles in use here, but the numbers are greatly reduced, and replaced by Chinese 125cc bikes that almost all appear to be copies of a 1985 Suzuki GN125.

This is the norm in Tanzania. Probably 200 pounds of corn on the back of this guy’s bike, headed to the market.

Between the border and Mbeya, I climbed into the mountains to over 7500 feet (2300m) elevation, and passed through beautiful green jungle hillsides before descending into Mbeya. 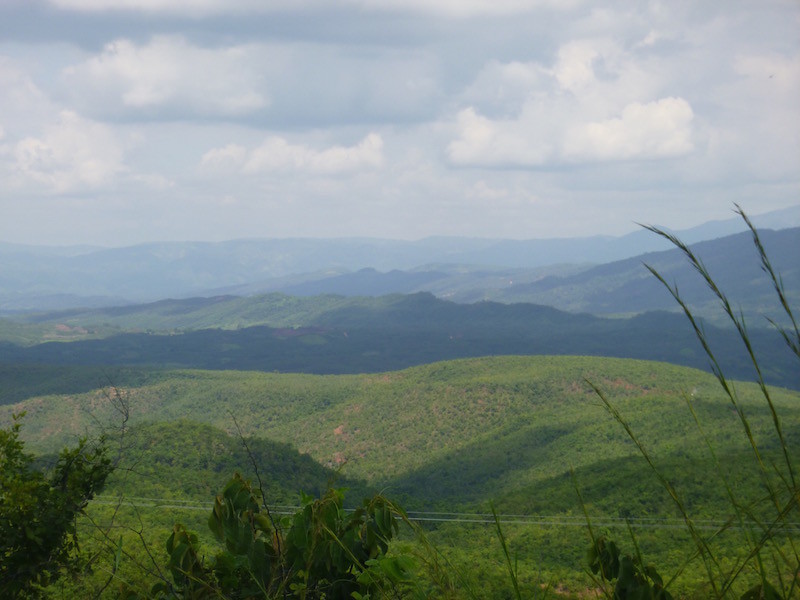 After Mbeya, the road became straight and full of potholes, although for quite some distance they had removed the asphalt altogether and it was simply dirt while they built a new, wider road. The “dance” with the buses and large trucks, which never slow down and take all the road they want, was exhilarating to say the least. Brushing my elbow against the side of a bus going the opposite direction at 60mph, with no room left on my side of the road and a very large pothole approaching, will definitely get the heart rate going.

I climbed again past 6500 feet elevation into a thick forest that appeared to have been re-planted, as the trees seemed to be very evenly spaced. This area looked like it had been harvested and replanted in the last 10 to 20 years.

I found my campsite for the night just before dark. The temperature dropped quickly and I had to put my fleece pullover on before setting up camp. I hadn’t envisioned being cold in Africa, but then I had no idea that the mountains around Malawi and Tanzania were so tall and so abundant. It was a nice change to sit in the dark, in the cold, and sip hot chocolate (one of the luxuries I carry with me) at my campsite before going to bed.

As a side note, I will be shutting off access to my “Where Am I Now” tracking for the next couple of weeks. Those that know me, know that I am heading towards an area that is a bit more dodgy and I prefer not to have the ability to pinpoint my immediate location. I’ll turn it back on in a couple of weeks when I feel I’m in a better area.

9 thoughts on “On to Tanzania”