I’m not a fan of big cities. I managed to avoid nearly all of them in the year I rode around the world. But we were about to skirt London and had a couple of days, so we decided to do a quick sight-seeing tour.

There is nothing cheap in big cities, especially when it comes to tourism. Our budget doesn’t allow for nice hotels. As I’ve said many times, every dollar we save today means we can continue traveling for another day. If we over-spend now, our trip comes to an early end, which neither of us want.

So here’s where we compromise: in order to see the sights of an expensive place like London, we stay in very modest lodging. For example, the Holiday Inn in Regent’s Park, London is £417 a night ($515.00) right now. That’s two weeks worth of camping.

We subscribe to the “we’re only sleeping there” idea, which means as long as the room is clean (and the bike is safe), it will do. That’s how we ended up at the Bridge Park Hotel in London. This place has without a doubt seen better days, and it’s sort of a mix of hotel and hostel. You can get a room with a shared bath down the hall for £66, or you can get a room with a private bath for £75. Even cheaper on certain days. There’s no lift (elevator). The paint isn’t pretty, and the furniture is dated. But the bed and bath are clean, and there’s a relatively safe parking area for the bike.There’s also an attached bar and kitchen with some decent food. The neighborhood might look a bit rough, but a lot of London does.

We said goodbye to the Sorokos in Chester, and headed to London. The hotel ended up being not far from Wembley Stadium, which with its large arch is an easy landmark. We checked in, carried our gear to the room, and walked to lunch before laying out a plan for the following morning.

I didn’t realize how close our hotel was to the Ace Cafe until we started looking on Google Maps for a place to eat lunch. It turned out to be a one mile walk. For those not familiar, the Ace Cafe is a historic place for motorcyclists, as this was basically a truck stop on the outer Ring Road of London in the 1950s and the Rockers would gather here on their motorcycles at night.

The Ace Cafe was closed for a time, then bought and restored and re-opened as a motorcycle gathering spot. 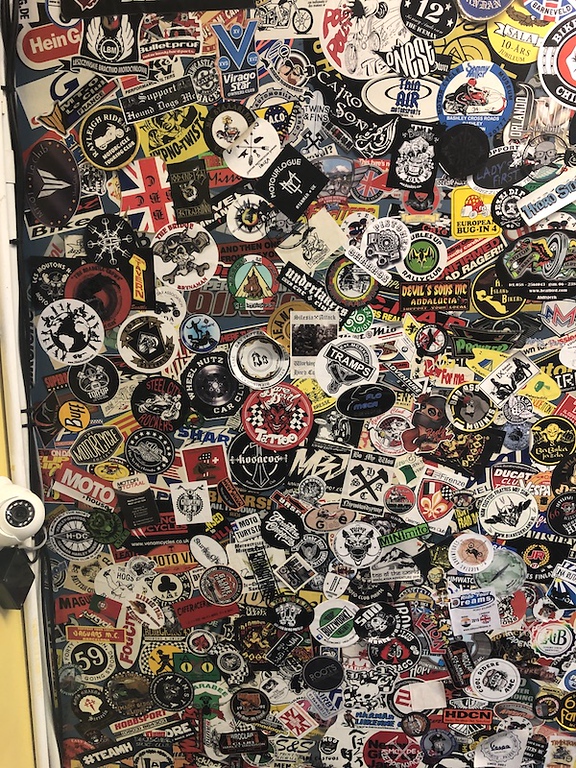 Center left: 2RideTheGlobe joins the legend of the Ace Cafe.

The next day we were up early and walked to the Underground to catch the train to Buckingham Palace to see the Changing of the Guard. Since the Queen’s Platinum Jubilee had just recently taken place, they were still in the process of tearing everything down from that celebration, which made accessing the front of Buckingham Palace a little more tricky. We ended up standing at the fence across the street, as the crowds had already filled the area directly in front of the palace. This limited our view of the actual events, though we did get to see the Old Guard and the New Guard march in.

This was as close as we got to Buckingham Palace. You can see the crowds in front of the main fence. There were actually more crowds behind us as well. 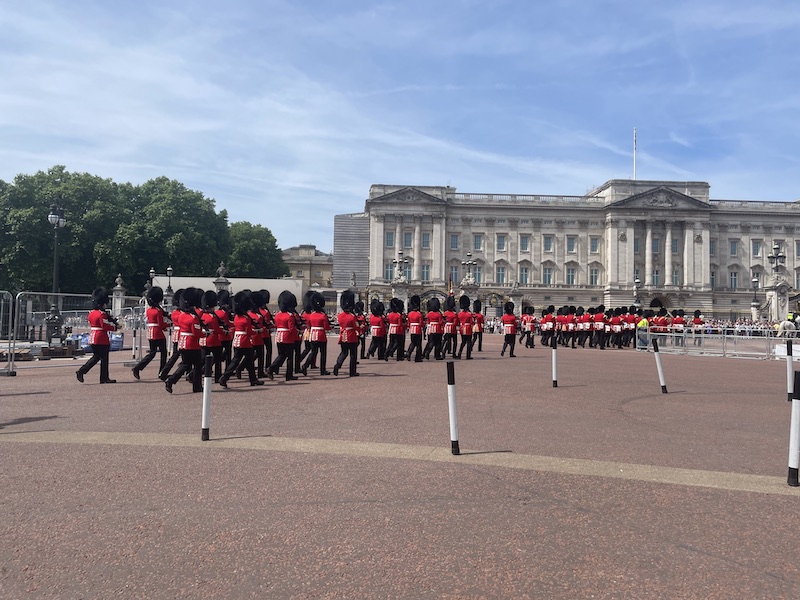 The New Guard marching in.

After the Changing of the Guard, we left Buckingham Palace and headed down the street to Westminster Abbey. This is a fairly pricey tour ticket, but the place is huge and the sights inside the Abbey are worth it, in my opinion. Westminster Abbey was built between 1042 and 1745, with most of the construction taking place in the 1500s. Not only is the architecture impressive, but the list of people entombed there, along with the amazing artwork of the tombs themselves, is impressive. The number of Kings, Queens, and other Royals and VIPS that are resting here is amazing, but I’ll let Diana tell that story on the Facebook or Instagram site.

Detail of the ceiling.

Poet’s Corner. Not all of these people are buried here. Some just have stones to memorialize them. 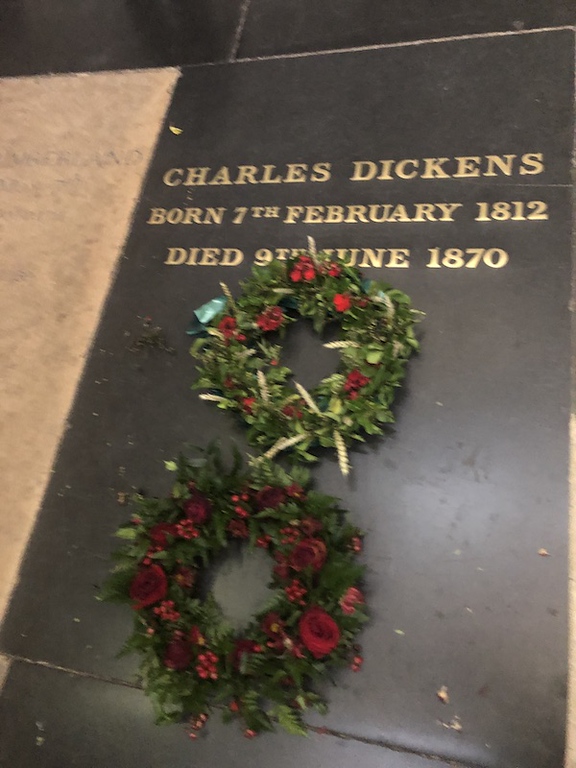 This one is actually buried here.

After a couple of hours at the Abbey, we headed across the street for a quick view of the Palace of Westminster, or England’s Parliament building. There was a lot of scaffolding and construction going on, so no photos, but we did snap a quick photo of Big Ben at the end of the building.

How many million times has this photo been taken?

Then it was a bit further up the street to Trafalgar Square for a view of the fountains and sculptures on display there.

This was a bit bizarre. The other columns had famous military people on horseback atop them. This one had a large ice cream with a cherry on top, and on the back of the ice cream was a giant fly, while on the front was a giant drone. The drone actually broadcasts a live video feed.

After Trafalgar, we hopped back on the Underground for a quick ride to Kings Cross, where, as any nerd knows, is where Platform 9 3/4 is located. We arrived at Platform 7, and not far away, was…

The line of children, teenagers, and adults waiting to have this photo taken was probably 50 people long.

And thus ended our Speed Tour of London. We jumped back on the Tube and headed back to our hotel for one last night in a bed. Tomorrow we’ll leave the UK and our Schengen time clock will start up where we left off (at Day 14 in Schengen Time).

3 thoughts on “One-Day Tour of London on a Budget”