For the first time in several months, I am driving on the right side of the road. Not the “correct side”, just the right side. I find myself having the same problems now as I had in Cape Town, South Africa when I switched to the left side: intersections require thought. Left turns now are the wide turns. I have to constantly remind myself of that as I approach. I know it will all come back quickly, but I still fear pulling out onto the street into oncoming traffic. Driving on the left had finally become “the norm” and required less thought.

Along with the switch in driving comes the switch in language. I spent the past month in the only English-as-a-first-language country I’ve been to in the last year. Although much of it was as hard for me to understand as Swahili. Yesterday was French. Today Belgian. Tomorrow German. Saturday Polish. Suddenly seven months of Spanish seems relaxing.

The rain stopped yesterday and I was able to navigate my way out of London, slowly.

London is the second largest city I’ve been through since leaving home; Buenos Aires being the largest by far. Aside from those two, I pride myself on the fact that I’ve avoided nearly every population center on the last several continents. Los Angeles has nothing on London when it comes to traffic. On a motorcycle, you can “filter” (split lanes) and use the bus lane on city streets, but with my wide panniers I am somewhat limited. I understand why there are so many scooters in London. It took me nearly two hours to go twelve miles this morning.

The Channel Tunnel from England to France was a bit of a disappointment. I don’t know what I was expecting, but for £48, I guess I was expecting more than standing next to my bike in a subway car with no windows for 30 minutes. Luckily there were three Belgians returning from Ireland on two BMWs onboard on the train with me, so we had something to talk about. One of them was headed to Assen for the MotoGP race this weekend. If I didn’t have plans already, I would have followed.

Lining up to load onto the Channel Tunnel train to Calais.

Looks like a subway car with the seat removed and bikes in their place. After loading, an attendant came through and told us that they had loaded us onto the wrong car. This one did not have the “suspension”, so we were to not leave our bikes for fear they would fall over. I’m not sure where I would have gone if I had left my bike; it’s just a long garage.

The best thing about Europe, at least most of it, is crossing borders. No two hours of dragging through immigration and aduana (customs) to exit one country and again to enter the next 100 yards later. No hassles at every border paying fees, buying separate insurance, visas, etc etc. If it weren’t for the language difference, I never would have known when I crossed from France to Belgium. I never even saw a sign. Crossing countries in Europe is like crossing state lines in the US, although I’m uncertain which country contains the rednecks at this point.

I’ve been through much of this part of Europe before. I don’t have a lot of things on my “must see” list for this area right now, so I’m moving across fairly quickly. Europe is expensive compared to Latin America, so I have to be more cautious, and perhaps more creative, about how I spend my time here. 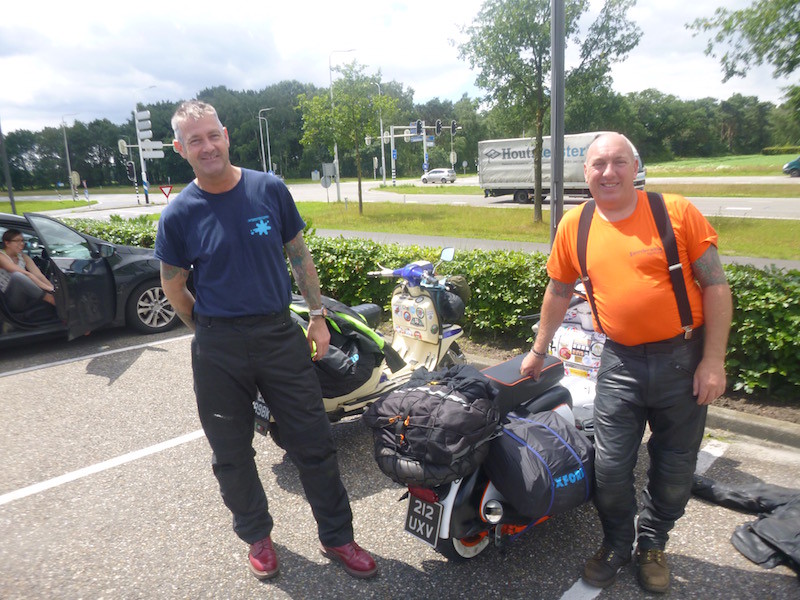 I stopped to use the free wifi at a McDonalds in the Netherlands and met these two guys from England on their way to a Lambretta rally in Germany. They’re riding 50 year old scooters, and running faster than I am.

Without a doubt, the UK has been the most expensive place I’ve been on this trip. Gasoline is £1.28 per liter, which is about US$7.12 per US gallon. Campsites are typically US$20 a night, and the Travelodge budget hotel is US$84 a night. At the same time, Scotland and other parts of the UK have been incredibly scenic. So wild camping in Scotland (free), and buying groceries and cooking meals can keep the daily expenses down to about US$25 a day or less.

I knew when I planned this trip that I needed to be cautious in Europe, Australia and the United States, as those would be the most expensive places. With my knowledge and ability to live more simply and still be comfortable, I feel like I’ve eliminated some of the need to avoid these places, and can spend a bit more time practicing “sleeping cheap”.

After all, practice makes perfect.