We left Pai and continued on Northern Thailand’s version of the Gringo Trail: the Mae Hong Son Loop.

About eight kilometers out of Pai we stopped at the World War Two Memorial Bridge. During the war, Japanese troops advancing through Thailand toward Burma recruited local Thai people to build a bridge across the Pai River.

The original bridge was burned as the Japanese army retreated from Thailand, cutting off Pai from Chiang Mai. The locals eventually rebuilt the bridge, and in the 1970s a new Memorial Bridge was constructed.

While stopped at the bridge, I saw this sticker on the rear window of a mini-bus. It translates to something like “Love life…Don’t fight wife.”

An hour or so later we stopped at a roadside coffee bar called Witch’s House. 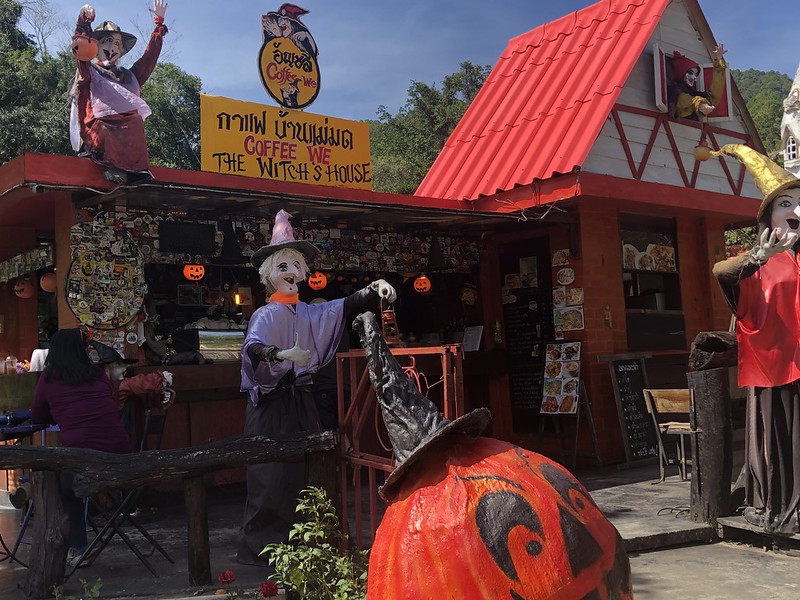 The whole place is covered in Halloween-style witches and pumpkins.

When we pulled in, the parking area was full of large adventure touring bikes, all belonging to Thai nationals.

We decided to have lunch here so we sat on the back patio and ordered some Pad Thai. Not long after finishing lunch, about fifteen guys pulled up on rental Yamaha scooters, all wearing Yamaha Malaysia shirts. It turns out they were Yamaha dealers in Malaysia, joined by the General Manager of Marketing from Hong Leung, the Malaysian Yamaha importer. I told them I had recently retired from Yamaha US, and we had a great conversation.

“Yamaha US and Malaysia Meet in Thailand”. Great fun running into Tim and the Yamaha dealers from Malaysia.

Back on the road, we said goodbye to the Mae Hong Son Loop as we turned north again and headed toward Chiang Dao.

We stopped at the Mok Fa waterfall.

Watch out! In my prior life, we referred to these not-quite-correct interpretations as “Jenglish”, or “Japanese English”. Here I guess it’s “Thenglish”

Amazing, amusing, and a bit confusing to see these monks, who (I thought) have given up earthly possessions, suddenly produce an iPhone from somewhere in their robes, and take photos of one another at the falls.

Continuing north, it was becoming increasingly clear that we had left the Farang Trail. We didn’t see another white person the rest of the day, and English subtitles had faded from most signs. We pulled into our lodging at MonChom Doi and walked to dinner nearby.

Our lodging for the night.

Our hosts. As usual, extremely friendly and helpful, even with no English on her end and no Thai on ours.

This seems like a good time to mention that I’ve been dealing with a language problem since we boarded the plane to Bangkok. Actually, way earlier than that. But I’m a slow learner.

Diana is more hesitant to speak when she feels she won’t be understood, regardless of whether it’s in English or Thai. Not me. I’ll try either, and usually fail spectacularly. She is good about just pointing to menu items or pictures. Not me. I’ll say it.

So I’ll point out that way back in Italy about a dozen years ago we were in a gelato shop and the owner told me that my “English is very poor” in a heavy Italian accent. That should have been a clue.

When we got to Bangkok, we jumped in a Tuktuk. The driver asked “Where are you going?”
“River City”, I replied (a large shopping center).
“”Where?”, he asked again.
“River City.”

He still didn’t understand. He motioned for me to get out of the Tuktuk. We walked a block down the street to a market stall. The owner spoke English. They had a quick conversation and then the stall owner asked me, “Where are you going?”
“River City”, I said again.

He turned to the Tuktuk driver and said “River City”, in an accent that sounded (to me at least) exactly like mine: American.

“Ahhh! River City!”, the driver replied. We walked back to the Tuktuk and the driver took us straight to River City.

That should have been a clue. But I’m still at a loss as to what I would have done differently in that case.

At dinner in Chiang Dao, my communication skills continued to falter. When I ordered two Tom Yum soup dinners, I pointed to the menu (I’m a slow learner, but I can still learn), then showed the waiter two fingers. In my feeble mind, that translates to “times two” or two orders. But here, it means “one order for the two of us; we’ll share.” Which it turns out was a good thing, as the soup bowl was big. As if to confirm this, the same thing happened when I tried to order two beers: two fingers = one bottle, two glasses.

In the end, I’m at least learning, if slowly.

One thought on “Pai to Chiang Dao: Yamaha Malaysia, and Lost in Translation”