Leaving Anton Valley I saw on my GPS what looked like an interesting small road cutting across to the highway that might save some time. Just a few kilometers from the hostel, I turned left and drove past beautiful million dollar homes on perfectly landscaped large lots. While this area hasn’t really been “discovered” by the foreign tourists and retiring ex-pats, it is a favorite spot for wealthy residents of Panama City who want to escape the heat for the weekend.

Further up this small road the climb became quite steep. Perhaps one of the steepest paved public roads I’ve ever experienced. I kept thinking the front wheel was going to come off the ground with all the weight I have on the rear of the bike. Eventually I crested the rim of the crater and almost immediately came to a security guard at a large gate. It seems my shortcut has been privatized into a luxury resort. I asked if the road still went to Bejuco, and the guard said yes, but it is now private. I smiled, thanked him, and headed back down the way I came.

Just as I got back to the main road out of Anton Valley, it started to rain. And it didn’t stop until I got to Panama City. I crossed over the Paraiso bridge over the Panama Canal into Ciudad del Saber (the City of Knowledge) and rode parallel to the canal past the Miraflores Locks. This area was once the Clayton military base when the United States controlled the canal. It has since been turned into businesses, schools, scientific research facilities, and residences with a focus on improving quality of life for Panamanians. There are still a lot of U.S. citizens living here.

I arrived at my guest house around 2pm, but the host family wasn’t home, and with a break in the rain I decided to head into Panama in search of tires. About ten minutes later, the bottom fell out of the sky, and I was riding in dense traffic in what felt like a waterfall. Since it wasn’t raining when I left the house but was humid, I had left the collar of my jacket open. Now I struggled to close it in traffic. I clearly didn’t get the flap sealed correctly, and within minutes I was drenched. As was everything else in my jacket. Fortunately I keep my passport in a waterproof envelope, but my smartphone and wallet took the brunt of it. I spent the next 45 minutes riding around and around, looking simply for a place to stop under some sort of cover, but finding nothing. I went ot Albrook Mall, a huge shopping center, thinking I would find a parking garage. Nope. People here take buses or taxis to the mall.

Streets flooded. Buses and cars zipped past me, spraying me with additional walls of water. The bike died. Five or six times. It always started right back up, but clearly it wasn’t happy about its’ current status as submarine. Heading back towards the house, I rode through a “puddle” on an on-ramp, and watched the front axle disappear. The water was deep enough that at 35 mph the pressure pulled my feet off the footpegs. I turned the throttle wide open, pointed the bike straight ahead, and hoped for the best. It didn’t get any deeper and I came out the other side and headed for “home”.

I’m staying in a neighborhood where everyone works out….even the children playing in the street are built like Hercules. Or maybe the signs are just a little optimistic.

On Friday the weather cleared and I again went in search of tires, finally locating some Pirelli MT60s near downtown. Not exactly what I had been looking for — considerably less off-road oriented than what I’ve been using — but they should get me well into South America.

My host family invited me for dinner Friday night, and I had a great meal and conversation. They are from Ecuador, and love and miss their homeland. I broke out my Ecuador map and Carlos gave me some great tips on what not to miss in Ecuador.

On Saturday morning, Carlos and Dianna and family left for a weekend island expedition and whale watching, and left me the entire house; not just the small cabana I’m staying in. I am again amazed at the generosity and openness of people. I’ve been here a day, and they give me a key to their house and leave. “See you Sunday!”

My phone continued to dry out for a couple of days, and after some false starts, it seems to work again. I don’t use it as a phone, but it has a lot of information in it, and a couple of navigation apps that sometimes (okay, often) work better than the Garmin GPS in this part of the world. I would miss that if the phone died completely.

I spent Saturday sight-seeing. First up was Casco Viejo, the old part of Panama City. Much of this area was built in the 1700s, and it has a very New Orleans colonial look and feel to it.

Las Bovedas, or The Vaults. This area was built in the 17th Century as part of the defense system of the old city, and the thick walls also allowed these vaults to be used as barracks and a prison. This area was also known as the Bastion of Chiriqui, and today the Plaza de Francia sits in front of the vaults. 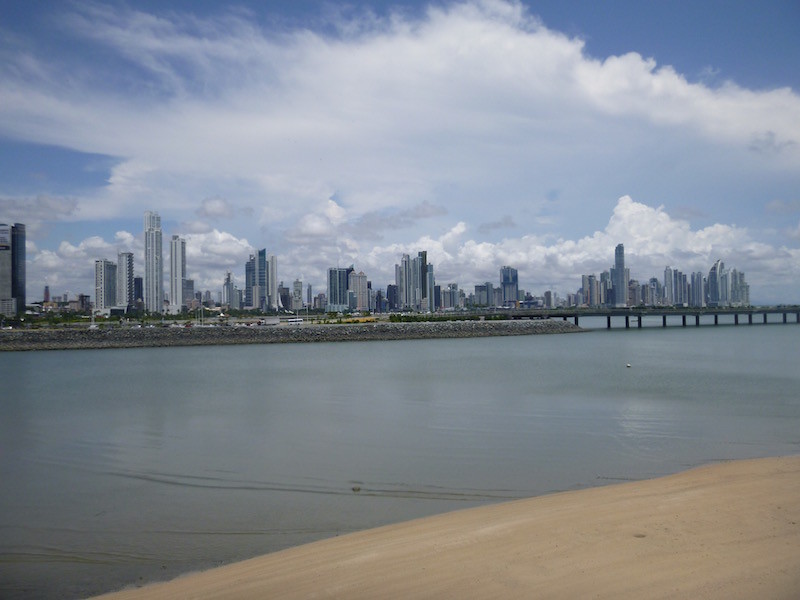 Looking across to downtown from Casco Viejo

Looking the other direction at the ships on the Pacific side of the Canal waiting to enter the first set of locks.

Bridge of the Americas

After lunch in Casco Viejo, I headed to the Balboa Yacht Club. This is one of several harbors on the Pacific side that private boaters use before transiting the Panama Canal. I had read that the canal requires four people on each boat that passes through, and many solo sailors and couples need to hire deckhands (line handlers, actually) to assist through the canal. I hung around the docks and posted a small ad on their bulletin board to see if I could volunteer as a linehandler. It’s a one-day trip through the canal, and I could ride the bus or train back from the other end. Seemed like a great way to see the Panama Canal, for free. It’s not high-season, and there are few boats here at the moment. I heard there may be a better chance starting at the other end, in Colon, but that would require me either staying in a hotel there for a few days in hopes of getting a ride, or taking the bus each day. So for now, I’m hanging around the docks each morning at a couple of marinas to see if anything turns up. At the very least, I’ve met some interesting characters there.

I love this. This is a set of light switches at the yacht club. Notice that most of the switches are labeled as to their function (“techo” means roof). Then note the bottom right switch. Someone took the time to label the switch “No Se” (Don’t Know).

Another view of the city from the Metropolitan Natural Park in the middle of town.

I have a few more days of prep before heading out of Panama on Thursday. My Colombia plans are coming together. I’m excited about a new continent.

One thought on “Panama City (not Florida)”